Theresa May’s deal is the ‘most acceptable’ Brexit outcome for voters with nearly half saying they could live with it, poll finds

Theresa May’s Brexit deal is the most acceptable Brexit outcome for voters – with nearly half saying they could live with it.

A poll has underlined the depth of public splits over how to handle the UK’s future relations with the EU.

Research by Number Cruncher Politics asked what the preferred path was, and found staying in the bloc was the most commonly favoured with 37 per cent.

Some 29 per cent wanted to leave with no deal, while 23 per cent supported the PM’s package and 10 per cent did not know.

However, the picture became clearer when people were asked which of the options they found unacceptable or acceptable.

Meanwhile, no-deal Brexit was backed by 45 per cent and unacceptable to 39 per cent.

But by contrast. Mrs May’s was the least divisive. Some 49 per cent found it acceptable, with 30 per cent implacably opposed and a fifth – 21 per cent – saying they were not sure.

In an article on the Bloomberg website, Matt Singh of Number Cruncher Politics said: ‘As far as the public is concerned Theresa May’s deal is unloved, but it’s the closest thing to a compromise that most could live with.’

The findings emerged as Mrs May fights to win over Tory Brexiteers and the DUP to her deal with the EU.

The premier is trying to get more concessions from Brussels on the Irish border backstop, which is the major sticking point to getting it through the Commons.

But Mrs May is facing another devastating blow to her  strategy after Labour lined up behind a Remainer plot to rule out no deal.

Shadow chancellor John McDonnell said his party is ‘highly likely’ to support an attempt by pro-EU MPs to seize control of Parliamentary business from the government, so legislation can be passed extending the Article 50 process.

The endorsement could put Mrs May on track for another humiliating defeat when the plan comes before the Commons next week, as more than a dozen Tories have vowed to rebel.

Trade Secretary Liam Fox warned this morning that the scheme would have a ‘calamitous’ effect on public faith in politics – suggesting no deal was preferable to postponing Brexit.

Meanwhile, George Osborne has joined the attack on the government by warning that crashing out of the EU would be like playing ‘Russian roulette’ with the UK economy. 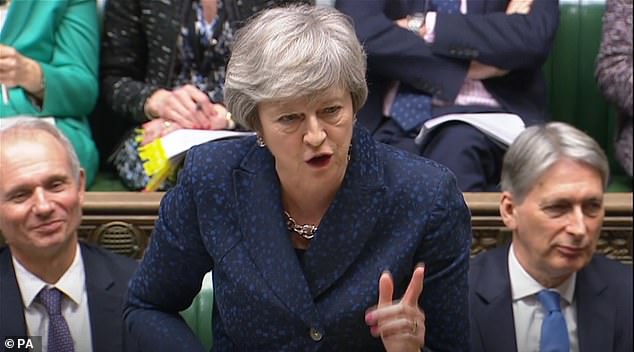