Theresa May’s diabetes patch not available to all patients

Catching sight of Theresa May sporting a diabetes patch the size of a £2 coin on TV a few weeks ago, George Hakes saw it as a hopeful sign he’d soon be able to get one on the NHS.

The device, worn on the upper arm, continuously monitors glucose levels. Results can be read using a device which scans through clothing, reducing the need for finger-prick blood tests. For 350,000 people in the UK who have type 1 diabetes these tests must be done throughout the day, before and after eating and exercising and before driving, to monitor for dangerously low or high blood sugar levels.

George, who was diagnosed with type 1 diabetes when he was 11, needs to inject himself with insulin around six times a day and was measuring his blood sugar up to ten times a day with a finger-prick test. ‘It’s time-consuming and painful and doesn’t give you an accurate picture of your blood sugar over time, just at that moment,’ says George, 27, a local government officer, who lives in Cambridge.

The device he spotted on Mrs May, the FreeStyle Libre, is the first of its kind. It monitors glucose in fluid between cells via sensor filaments the width of two hairs. A device roughly half the size of a mobile phone takes readings.

The patches last two weeks and store up to eight hours of data, displaying it on a graph so people can see if their blood sugar is on an upward or downward trend and can adjust their insulin dose, or food intake, accordingly. Aimed at those with insulin-dependent type 1 or type 2 diabetes, the charity Diabetes UK says systems like this have been shown to improve blood sugar control, reducing hypoglycaemia (low blood sugar attacks) and hyperglycaemia (high blood sugar).

Research published in the Lancet in 2016 found the Libre reduced night-time low blood sugar attacks by 40 per cent and serious cases by 50 per cent. Around 11,000 people are admitted to hospital in England each year because of low blood sugar.

‘My average levels have improved since I began using it,’ says George. ‘I have to sit in long meetings at work and it just isn’t convenient to prick my finger. But scanning the patch can be done discreetly.

‘I also discovered my blood glucose levels were dropping dangerously low early in the morning, so I may have fallen into a hypo and never woken up. The device spotted the pattern and I adjusted my insulin.

‘A few years ago my blood sugar was a rollercoaster. In the long term high blood-sugar levels can cause complications such as kidney disease, nerve damage and blindness. I was aware of people dying as a result of hypos. It was a source of worry.’

For two years, George has paid £96 a month for the patch, plus a one-off cost of £133 for the reader. But, like many, he can’t always afford it.

In theory, it is now available on the NHS. On November 1 last year, the FreeStyle Libre patch was added to the NHS drug tariff, meaning it can be prescribed subject to local health authority approval.

But a postcode lottery seems to be emerging. Prescribing committees have given it the green light in Wales, Greater Manchester, Cumbria and Brighton. Hampshire and London committees are believed to be deciding in the next few weeks.

However, George’s clinical commissioning group (CCG), Cambridge and Peterborough, is among those that have previously said there isn’t enough evidence the Libre is effective, and George says he hasn’t heard yet if this has changed. 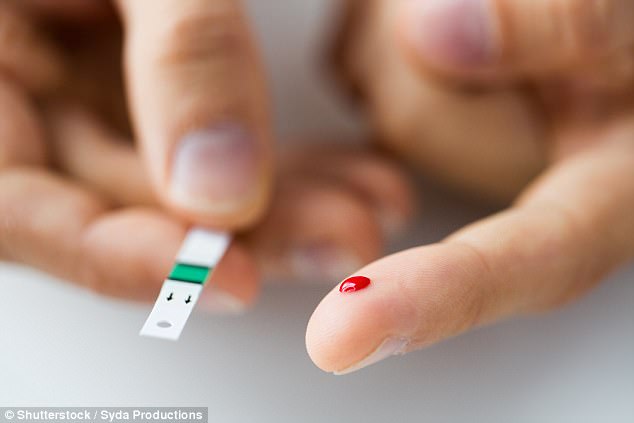 For 350,000 people in the UK who have type 1 diabetes these tests must be done throughout the day, before and after eating and exercising and before driving, to monitor for dangerously low or high blood sugar levels

David Stephens, 26, from Newport, Wales, who has type 1 diabetes and uses an insulin pump — a portable device that delivers a constant supply of insulin — is lucky. His local health authority agreed to fund the FreeStyle Libre for him.

‘I was previously self-funding but had to go back to finger-prick testing after I lost my job,’ says David.

‘I am hoping I will be able to go back to work in the retail sector as it’s now so much more convenient to take my blood glucose reading.

‘I was having to do finger-prick tests 15 to 20 times a day — that’s not easy when working on a checkout.’ While the Libre doesn’t wholly remove the need for finger-prick tests — The National Institute for Health and Care Excellence (NICE) advises you still do some for back-up or before driving, for example — David now does only four to eight a day, which he says is much more manageable.

Guidance from NHS England’s Regional Medicines Optimisation Committee makes it clear that patients with type 1 must meet strict criteria to get the Libre, such as two or more admissions a year for hypoglycaemia or diabetic ketoacidosis (where the body starts to run out of insulin) and having to check their blood sugar more than eight times daily. People with type 2 diabetes are not currently eligible.

Nikki Joule, Diabetes UK’s policy manager, says getting the Libre on the drugs tariff is a major step forward. ‘It doesn’t go as far we would have liked, but we are encouraged. We would like anyone using insulin intensively [more than two injections a day or using an insulin pump] to have this on prescription.

‘While some CCGs say there isn’t enough evidence that the devices reduce complications and hospital admissions, this is as the data hasn’t been collected yet.’

In a bid to get the details, Libre manufacturer Abbott Laboratories has requested an audit, to be carried out by the Association of British Clinical Diabetologists, of all data from people prescribed a device.

‘Now local prescribing committees have the guidance, there should ideally be no blanket bans on funding the devices if people meet the criteria,’ says Dr Partha Kar, a consultant endocrinologist at Portsmouth Hospitals NHS Trust and associate national clinical director for diabetes for NHS England. He adds that if he had type 1 diabetes he would want one ‘in an ideal world’.

‘But is it affordable for all diabetes patients for the NHS now, with the evidence available? Probably not.’

George, meanwhile, is writing to his MP. ‘I realise the NHS is under pressure but I’m convinced this device will help me better control my blood glucose and reduce the risk of complications — and, ultimately, that will save the NHS money.