Theresa May’s husband has been dragged into the Brexit civil at No 10 after urging the PM to keep fighting for her deal.

The Prime Minister’s husband, Philip May, has encouraged her to keep pushing for a deal with Brussels that would finally win over rebels in her own party and the DUP.

But No.10 chief of staff Gavin Barwell apparently said Mrs May’s husband’s intervention helped to ‘scupper’ plans to reach out to Labour MPs and secure a deal for a customs union with the EU, as reported by The Sunday Times.

A source said: ‘Philip May was flamed by Barwell for scuppering the outreach to Labour.’

The Prime Minister’s husband, Philip May, has encouraged her to keep fighting for a deal with Brussels that would finally win over rebels in her own party

Mrs May’s husband is backing the view of chief whip Julian Smith that Mrs May must secure a deal that will satisfy Eurosceptics in the party, or risk its destruction.

The Prime Minister told her cabinet on Thursday she is going to renegotiate, with the contentious backstop issue the biggest bone of contention for many Tory MPs.

It comes after reports preparations are being looked at for the possible imposition of martial law after a no-deal Brexit.

The move has been described by sources as the civil service ‘prepping’ for all possibilities.

The revelation came as further Government splits emerged over whether Britain should quit the EU without an agreement as Defence Minister Tobias Ellwood broke ranks and insisted a no deal scenario must be ruled out.

In other measures the Government sought to extend working hours for MPs in order to get Brexit legislation through the Commons before the scheduled EU withdrawal date of March 29.

Responding to news the Government was looking at the possibility of a martial law scenario, Labour MP and Best for Britain campaign supporter, David Lammy said: ‘This is a full-blown crisis. 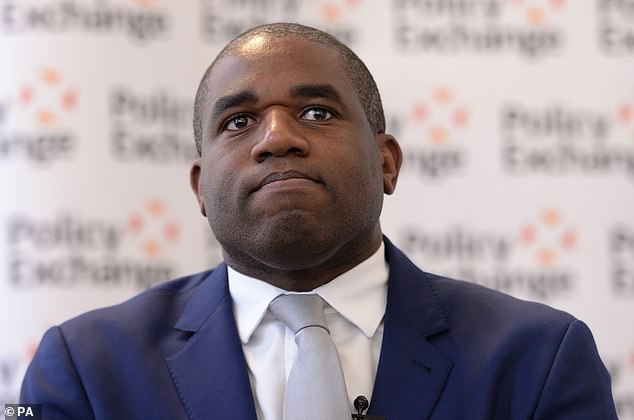 Responding to news the Government was looking at the possibility of a martial law scenario, Labour MP and Best for Britain campaign supporter, David Lammy said: ‘This is a full-blown crisis’

‘The Government is recklessly drawing up plans for a colossal act of self-harm.

‘Through continuing on the path to Brexit, despite having achieved no consensus on a deal in Parliament, the Government is preparing to declare war on itself.

‘The idea that the Government has any mandate for this catastrophic scenario is ludicrous.

‘The Leave campaign promised a stable new trading relationship with the EU after Brexit, not total isolation and soldiers in our airports.’

Despite Prime Minister Theresa May refusing to take the prospect of a no deal off the table, Mr Ellwood wrote in the Sunday Times: ‘It is now time to rule out the very possibility of no deal.

‘It is wrong for Government and business to invest any more time and money in a no deal outcome which will make us poorer, weaker and smaller in the eyes of the world.’