Dramatic new claims emerged last night about the souring relationship between Donald Trump and Theresa May, as government insiders revealed the president had insisted on being guaranteed a ‘warm welcome’ before he visited the UK.

Downing Street hoped that Britain’s controversial invitation to Mr Trump a year ago to come on a state visit would strengthen the post-Brexit ‘special relationship’, but officials there admit it has instead proved a ‘nightmare’, insiders have claimed.

The two leaders are due to meet at the World Economic Forum in Davos tomorrow at which Mr Trump is expected to formally invite French leader Emmanuel Macron on a US state visit, rubbing salt into the wound for Britain.

Upset: Close aides said the US president complained to Theresa May about the treatment he received in the British press (above, Trump pictured at The World Economic Forum on Monday)

Citing senior current and former government officials, Bloomberg News claimed that in formal phone calls between the two leaders, Mrs May now ‘finds it impossible to make headway and get her points across’.

‘Trump totally dominates the discussion, leaving the prime minister with five or 10 seconds to speak before he interrupts and launches into another monologue,’ an insider told Bloomberg.

In one phone conversation last year, Mr Trump reportedly complained to her about the criticism he had been getting in the British press.

Amid threats that he would face street protests if he came to the UK, he told her ‘he would not be coming to the UK until she could promise him a warm welcome’. 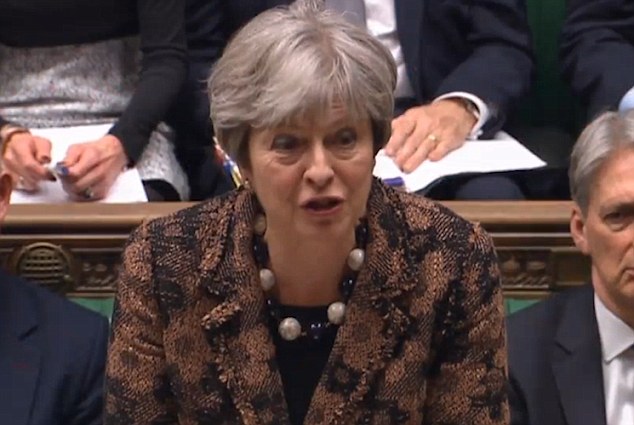 Souring: Sources close to the Prime Minster say the relationship between her and the President Trump has sourced (above, Theresa May in the House of Commons)

According to the report, Mrs May’s advisors listened in to the call from a secure bunker underneath Number 10 ‘in astonishment at Trump’s demand’.

Mrs May reportedly told the president that ‘such treatment was simply the way the British press operate, and there wasn’t much she could do’.

Their relationship isn’t helped by the fact that they are completely opposite personalities, say officials.

Katie Perrior, Mrs May’s communications director until last June’s general election, said senior British civil servants in both the UK and US wanted Mrs May to keep her distance from the volatile Mr Trump until he had been in office longer and warned against ‘rushing’ into offering him a state visit.

She said it was clear to her and others at the time that such an invitation was ‘over the top and unnecessary’.

However, Number 10 co-chiefs of staff Nick Timothy and Fiona Hill were anxious to strengthen relations with the US and achieve a post-Brexit trade deal.

It was argued that inviting Mr Trump and his wife to stay at Buckingham Palace and throwing a state banquet for him would ‘appeal to Trump’s vanity’.

The two chiefs-of-staff made a ‘secret trip’ to the US and made arrangements for Mrs May to come to Washington.

Mr Trump was delighted, comparing their relationship to the bond between Margaret Thatcher and Ronald Reagan as he reportedly told aides: ‘She’ll be my Maggie.’

Over lunch in the White House, he told Mrs May that Brexit would be a ‘brilliant thing’ and ‘the making of us’, said her former strategy director Chris Wilkins.

Instead, their relationship has rapidly cooled to the point that Mr Trump is ready to issue his first state visit invitation as president to Mr Macron.

Although the Queen no longer takes long haul flights and would not visit the US even if invited, Jim Messina, the White House deputy chief of staff under Barack Obama, described Mr Trump’s invitation to Mr Macron as ‘unprecedented’.

He said: ’Tradition has been, when I was the president’s deputy chief of staff, that your first state visit is always the UK,’ he said.

‘He’s breaking with tradition but that’s probably not surprising with this president.’

Insiders say it was clear from their first meeting that the Trump-May relationship would be tricky.

Officials were reportedly mortified to learn that she had been photographed holding hands with Mr Trump as they left the White House.

Over lunch that day, Mr Trump told the PM he believed there were parts of London that Islamic extremists had effectively made ‘no-go areas’.

She spoke up to ‘correct him’, said Chris Wilkins, who was there.

‘It was an hour of the president holding court and the PM being very diplomatic and not many other people saying anything,’ he said.

Mrs May has since repeatedly clashed publicly with Mr Trump, over issues such as intelligence leaks, the Iran nuclear deal, the recent terror attack in Manchester, and Mr Trump’s controversial re-tweeting of a British Far Right anti-Muslim activist.

As the Daily Mail was the first to reveal, he cancelled a trip to London next month to open the new US embassy.

Amid suspicions that he will never take up the state visit invitation, some in Mrs May’s team now regret their ‘nightmare’ decision to invite him, said Bloomberg.