These designer bags could fetch more than £120,000 at upcoming Christie’s auction

A series of rare designer bags presented at a Christie’s auction in June are estimated to fetch up to £100,000.

The pieces by Chanel and Hermès are estimated to rack up thousands of pounds each during the London auction on 11 June.

Style expert Amber Gordon told MailOnline that some of the bags on show were so unique, they could even fetch more than their estimates.

The auction includes two rare matte white crocodile Birkin bags, one of the most prized bags from the brand, which often fetches high sums in auctions.

A series of rare designer bags presented at a Christie’s auction in London in June are estimated to fetch up to £100,000. The Birkin white Himalaya bag from Hermès, pictured is estimated to fetch £100,000 during an upcoming auction. But an expert says that with the ‘right people,’ it could fetch much higher 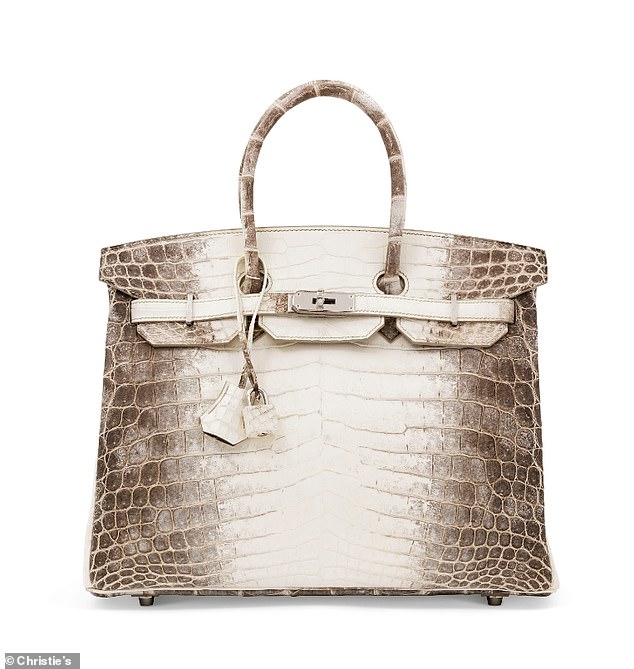 Pictured: The second, slightly smaller Himalaya white Birkin bag to be auctioned at a Christie’s event on 11 June in London

‘A Himalayan Birkin is the holy grail of bags for an Hermès collector,’ Gordon said, ‘they are produced in extremely limited quantities and would only be offered to VIPs and top spending clients of Hermès in the boutique.

‘These really are a work of art, they take 48 hours to create. It’s a huge status symbol as well as a very solid investment. These are often purchased solely as an investment and not actually to use,’ she added.

‘You’ll often see one hanging from the arm of a Kardashian or Victoria Beckham, it’s a truly special bag. Both sizes have the potential to surpass their estimates by far with the right buyers in the room.’ 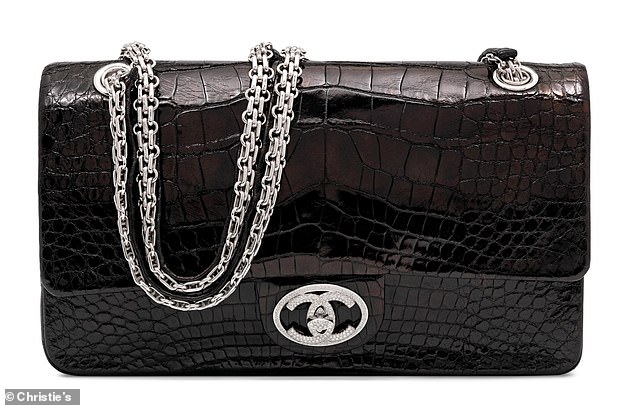 This Chanel bag with hardware (pictured) is very rare, and its value can only go up, according to Gordon

Elsewhere a Chanel flap bag, estimated to fetch up to £40,000, is deemed extremely rare by Amber: ‘I don’t think I’ve ever seen a Chanel classic flap with diamond hardware, this bag is very special,’ she said.

‘Chanel are actually ceasing to produce and sell exotic bags as of 1 June this year so this would be a fantastic investment – as they will no longer be available prices will sky rocket on the resale market in years to come.

‘Anyone with a slightly lower budget wanting to invest in something like this could also look at both exotic classic flaps with regular hardware as they definitely grow in value too.’ 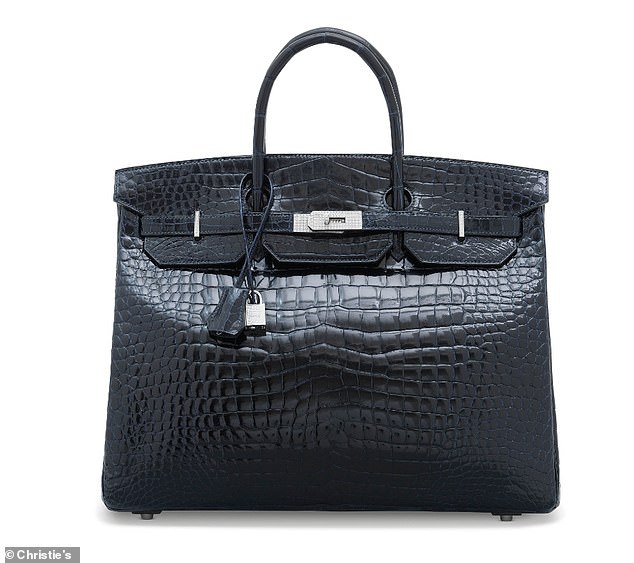 Explaining why this piece is particularly interesting, Gordon said: ‘The Birkin 40 is actually quite rare. You’ll mostly see b25 and b30 available on the resale market, with a lower quantity of b35 and the odd b40.

‘Its size, paired with that crocodile and diamond hardware make this one special. Out of the two crocs Hermès use – (Niloticus and Porosus) – Porosus is actually the lesser used and so rarer and more expensive.

‘The skins come from Australia and are distinguishable by the fact that the scales are larger in the middle and towards the edge of the bags get smaller.’ 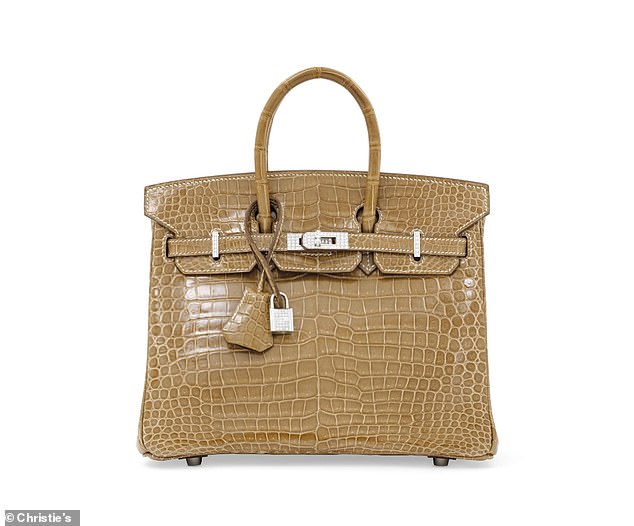 A shiny ficelle porosus crocodile Birkin bag with 18K white gold and diamond hardware could fetch £70,000 at the upcoming auction

Also made of porosus, the ‘ficelle’ Birkin with 18K white gold and diamond hardware is set to fetch £70,000. While the bag is 12 years old already, Gordon notes Hermès bags are a very good investment.

Surprisingly, Baghunter, a website that resells rare high-end luxury handbags, found in 2016 that Birkin Bags were a better investment than stocks and gold.

In 2018, a second-hand Hermès Birkin bag sold for £162,500 ($217,144) in London, a price equivalent to the cost of a three-bedroom house in Manchester. The sale set the record for the most expensive handbag sold at an European auction.

The bag was a 2008 Himalaya Birkin, made of Nile crocodile skin, with an 18-carat white gold diamond encrusted lock.

In 2017, another white Himalaya crocodile diamond Birkin fetched $379,261 (£286,920) at a Christie’s auction in Hong Kong. It still is the the most expensive Birkin handbag ever sold at a global auction. 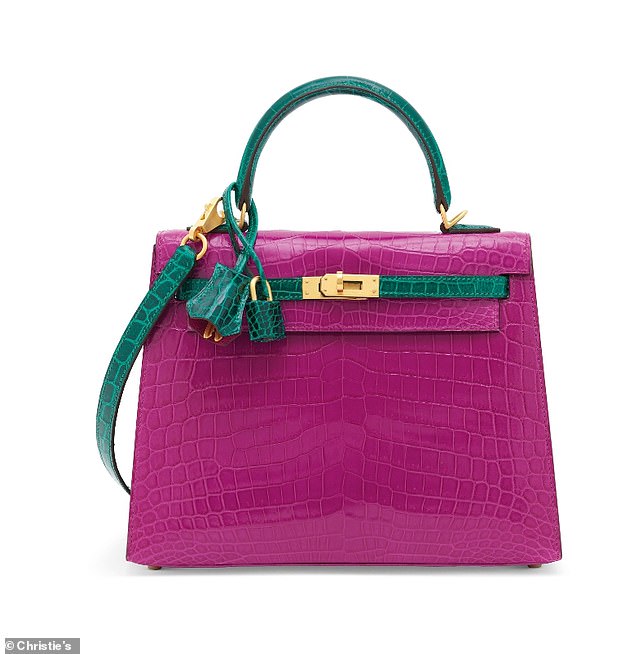 Custom-orders are very good collectors items – if you like the style. Pictured: a custom Kelly 25 bag in shiny ‘rose Scheherazade’ and vert emeraude from 2018, made with niloticus crocodile and brushed gold hardware, estimated at £40,000

Custom orders are also very popular at auction because of their rarity, but their unique designs aren’t always to everyone’s taste.

The upcoming auction features a custom ‘Kelly 25’ bag in shiny ‘rose Scheherazade’ and vert emeraude from 2018, made with niloticus crocodile and brushed gold hardware.

‘Boutiques allow a small number of select clients the chance to create their own bag, there’s an allocation every season as to how many can be created. It’s a huge honor to be offered this opportunity,’ Gordon explained.

‘They can choose the leather, the colors and even choose to have multiple colours. Sometimes it’s easy to spot an HSS (Hermes Special Order) as it will have two colours as this one has, this is not available for ‘ready to buy’ pieces,’ she added.

‘You can also tell as an HSS bag has a very small horse shoe right next to the Hermès logo, these bags are more coveted as they are one of one, completely unique, so they carry a higher resale value.’ 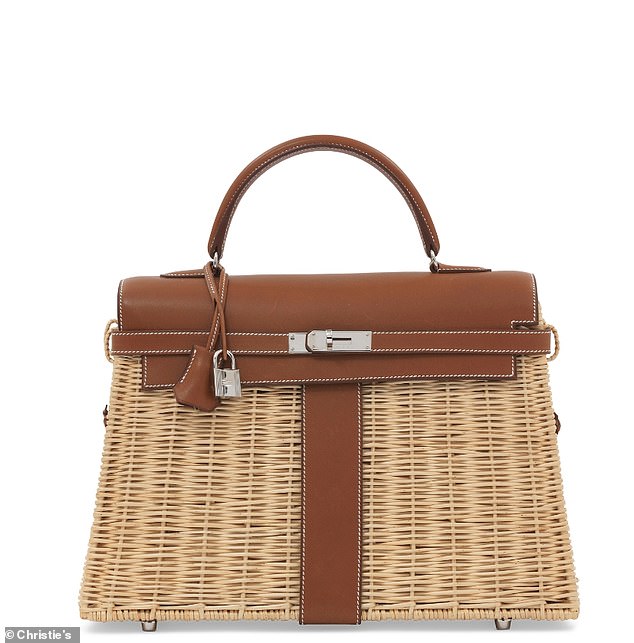 The Kelly picnic (pictured) may not look like much, but it is extremely rare. Gordon explains it was introduced in 2011, and is popular on the resale market because of how rare it is

Gordon adds that Kelly bags, which are less popular than Birkins at auctions, can be very rare and a good acquisition for eagle eyed-collectors.

‘The Kelly picnic is a real collectors piece and very rare. It was introduced in 2011, it holds the shape of a traditional Kelly but is woven by artisans using a special technique that keeps it strong and structured,’ she says.

‘It uses Barenia leather, which is the leather used by Hermès to make their saddles. Retail price when it was introduced was in the region of $10k, and it carries a huge premium on the resale market because of it’s rarity,’ she added.

‘This estimate is pretty low and it’s likely to go for a lot more considering one was sold at a Christies auction in Hong Kong a few years back for nearly $70k, and one last year in London went for around £38,000.

The picnic Kelly bag presented at the auction is estimated at £20,000. 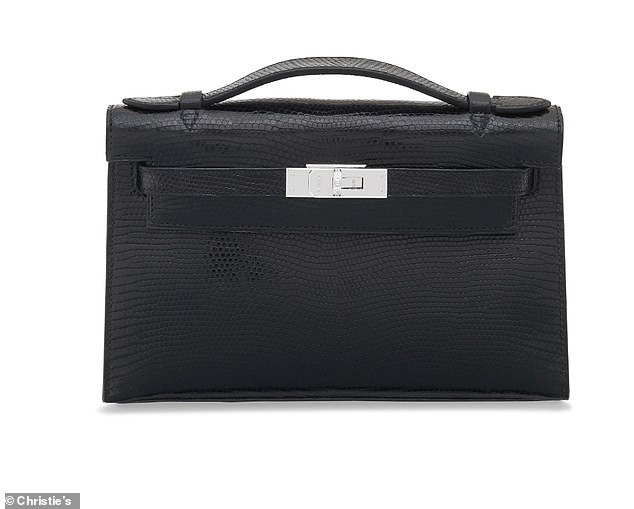 Pictured: A lizard Kelly prochette from 2007 that is expected to fetch £15,000 at the auction. Its hardware is made of 18K white gold and diamond

Meanwhile a lizard Kelly pochette from 2006 is estimated at £15,000 but Gordon says the estimate is too low. The bag is made of 18K white gold and diamond hardware.

‘I expect it will achieve much more. A lizard Kelly Pochette on the resale market brand new with gold tone or palladium hardware can go for anything from around 25k-45k GBP depending on the rarity of the color,’ she explained.

‘This piece is encrusted with 0.39 carats of diamonds on the hardware, much rarer than a Kelly or Birkin with diamond hardware so it could surpass it’s estimate.’ 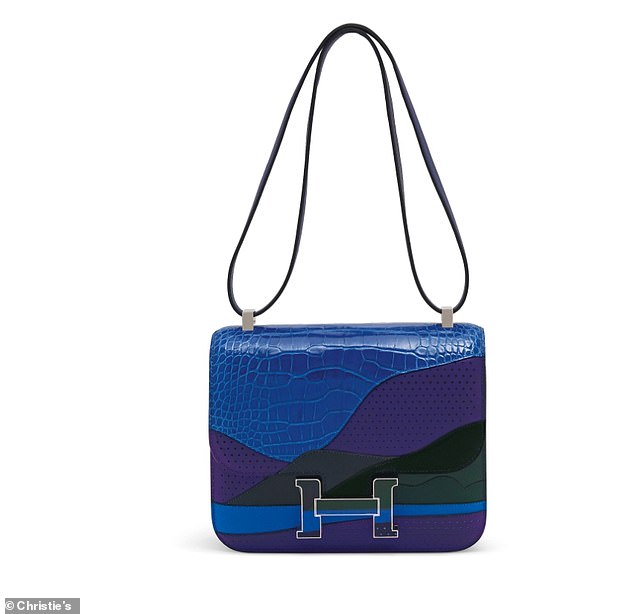 The fact that it is a limited edition makes this Constance bag (pictured) special. It is estimated at £25,000 and Gordon says that while less popular than Kellys and Birkins, Constances are still a good investment

‘Constance bags generally carry a lower resale value than the Kelly or Birkin but are still a sound investment, Gordon says. ‘This one especially as it’s a limited edition collectors piece, very distinguishable to anyone who knows their Hermès. 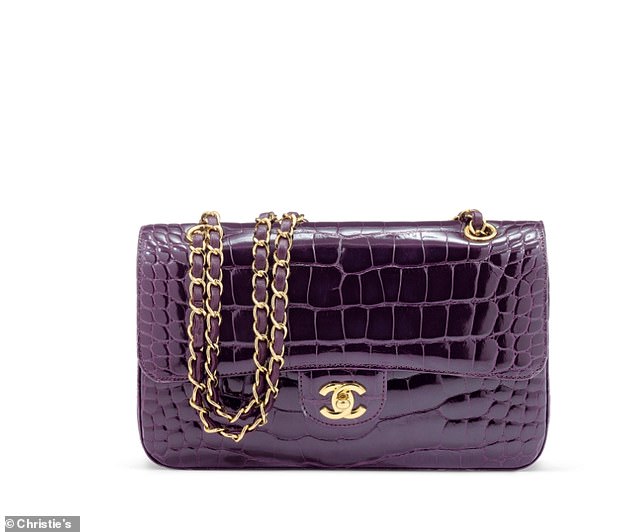 A shiny amethyst alligator medium double flap bag from Chanel (pictured) with gold hardware from 2010-2011 was estimated at £8,000