These mums are proudly displaying their post-pregnancy bodies on billboards

Few new mothers would care to admit – let alone reveal publicly – how much pregnancy has changed and marked their bodies. But millions of commuters are set to discover the naked truth this week in a groundbreaking billboard campaign featuring images of ordinary mums in their underwear, taken in the weeks after giving birth.

The arresting photographs, mounted across London’s buses, Tube and railway stations, celebrate every battle scar, from stretch marks and loose skin to ‘mum tums’ and the tell-tale scars of a caesarean section.

The campaign, by Mothercare, hopes to challenge unrealistic expectations set by celebrity mothers such as the Kardashians, Pippa Middleton and her sister-in-law Vogue Williams, whose photographs suggest they have snapped instantly back into shape.

The campaign, by Mothercare, hopes to challenge unrealistic expectations set by celebrity mothers such as the Kardashians, Pippa Middleton and her sister-in-law Vogue Williams, whose photographs suggest they have snapped instantly back into shape

Research by the retailer found 80 per cent of new mothers in Britain admit to comparing themselves with such images. Here, four of the ten women featured in the new campaign explain why they were brave enough to take part – and why they hope it will bring confidence to mothers everywhere. 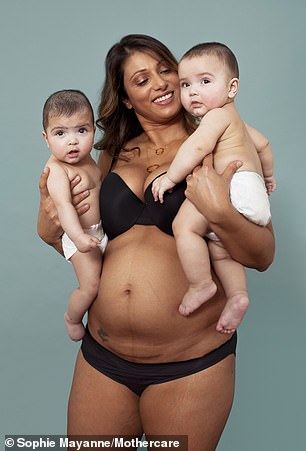 Tina Pack, 38, is an operations manager. She lives in London with her husband, 36, a solicitor, and their eight-month-old twins, Alex and Kaiya

CELEBRITY IMAGES HAVE MADE ME FEEL FAT AND UNATTRACTIVE

Tina Pack, 38, is an operations manager. She lives in London with her husband, 36, a solicitor, and their eight-month-old twins, Alex and Kaiya. She says:

We’re constantly bombarded with images of celebrities who have regained their figures immediately after giving birth, and it’s difficult not to feel pressure to try to meet those standards. I worry about the impact that it’s having on the way women and girls view themselves.

My motivation for taking part was my daughter, Kaiya. I want her to grow up to feel that her body isn’t something to be ashamed of. Unfortunately, we live in a world where we see more airbrushed and edited images than real photos.

It’s easy to forget that celebrities have chefs to cook special meals for them, nannies to help with childcare and personal trainers to whip them into shape – although few of them admit it.

I’ve definitely seen celebrity pictures and felt fat and unattractive by comparison. I think we’re all susceptible to being affected.

I’ve also recently discovered that some maternity brands put fake bumps on skinny models instead of using pregnant women to model their clothes.

I tried on dresses while I was pregnant and felt terrible because they looked so different on me, with my puffy arms and legs and huge bump.

On the day of the photoshoot, I felt terrifyingly exposed stripping off to my knickers and bra, with my massive post-pregnancy belly and livid caesarean scar exposed. Especially knowing all my friends, family and work colleagues would see the pictures.

I’m of Indian origin and in our culture, we don’t show off our bodies. My husband was extremely encouraging, as was my mum.

But I’m not sure that my in-laws understood why I had chosen to do it, until I explained.

Pregnancy and motherhood is being packaged up and presented in a way that’s nothing like the reality, which isn’t always pretty.

That’s why I hope showing the way my body has changed because of my beautiful babies will help to normalise those imperfections and encourage other women to be more forgiving of themselves – even if I do still cringe when I look at my stomach. 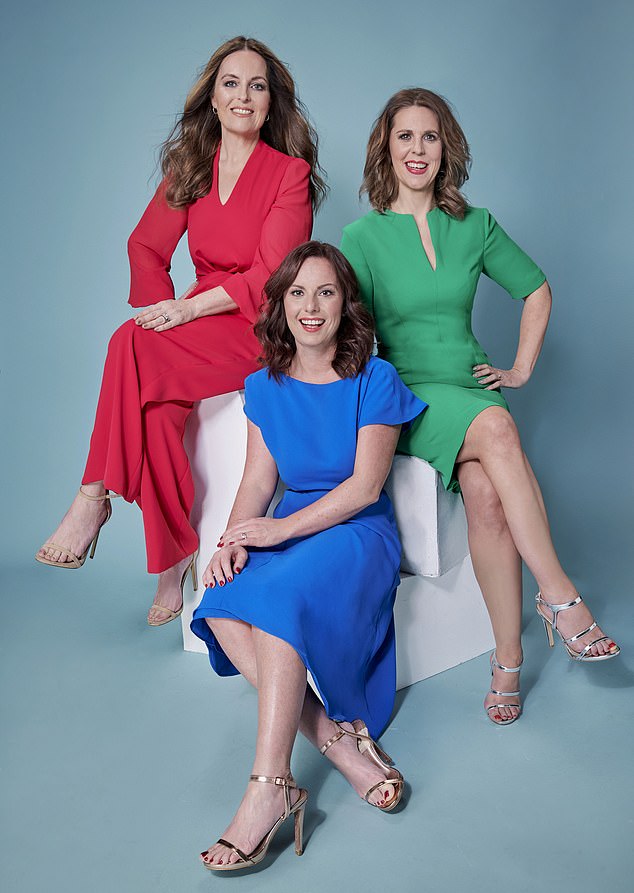 Research by the retailer found 80 per cent of new mothers in Britain admit to comparing themselves with such images. Here, four of the ten women featured in the new campaign explain why they were brave enough to take part – and why they hope it will bring confidence to mothers everywhere 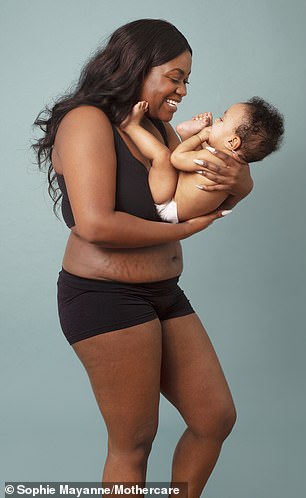 Natesha Gordon, 28, is a child protection officer. She lives in Essex with her partner Alan, 52, a train driver, and their seven-month-old baby Bryson

HOW WAS I EVER GOING TO MANAGE A ‘SNAPBACK’?

Natesha Gordon, 28, is a child protection officer. She lives in Essex with her partner Alan, 52, a train driver, and their seven-month-old baby Bryson. She says:

During my pregnancy, I was horrified when I discovered that celebrities including Kylie Jenner, the youngest member of the Kardashian clan, were sharing the secrets of their ‘snapback’ bodies with their millions of Instagram followers.

After investigating, I realised ‘snapback’ is a popular hashtag used on social media.

It refers to women’s plans to ping back into shape as soon as possible after giving birth, in Jenner’s case, by using a waist trainer – a type of modern-day corset – when her baby was just six weeks old.

Staring down at my enormous bump after looking at their pictures, I felt stressed about how I was ever going to manage any sort of snapback of my own.

Seven months after giving birth, my body still doesn’t resemble anything close to what it used to be like before I became pregnant.

At first, I was so ashamed of the angry-looking stretch marks across my stomach and the scar from my caesarean section that I’d wrap a towel around me before leaving the bathroom to stop my partner catching a glimpse of me naked. All the women in my family have stretch marks and I grew up hearing about how much they loathed them. I was convinced mine would ruin my body, leaving me unable to wear a bikini in public ever again.

My confidence was at rock bottom, particularly when I looked at celebrity women who’d been pregnant at the same time but now looked as though they’d never given birth at all, with their smooth, flat stomachs. Not a blemish in sight.

I thought this campaign could be an opportunity to transform my feelings about this new body I found myself inhabiting.

On the day of the photoshoot, standing there with my stretch marks on display, I began to feel that perhaps they weren’t so important after all.

I thought about the fact that they were the result of the most amazing thing in my life, my baby, and that by refusing to hide them away, maybe I could encourage other women to overcome their shame, too. I wanted to offer an antidote to all those images I’d seen of famous women boasting about their bodies, many of which were no doubt achieved with the aid of surgery.

If I’d seen someone on a billboard who looked like me when I was despairing of my new body, I know it would have helped. 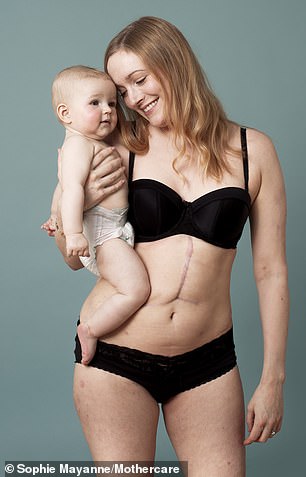 Louise Double, 31, is a dentist. She lives in Jersey with her husband Dave, 42, a marketing manager, and their eight-month-old daughter Amelia

I HOPE TO HELP REMOVE THE STIGMA OVER SCARS

Louise Double, 31, is a dentist. She lives in Jersey with her husband Dave, 42, a marketing manager, and their eight-month-old daughter Amelia. She says:

For many women, weight is a source of insecurity after giving birth but the issues I have with my body are very different. I almost died after having my daughter Amelia and wanted to be photographed to highlight an aspect of motherhood that’s rarely spoken of – what happens when there are serious complications.

After giving birth, my blood pressure plummeted and doctors discovered my kidneys and liver were failing because of a rare pregnancy-related disease.

When Amelia was six days old, I underwent a liver transplant at King’s College Hospital in London. As I recovered, I struggled to accept what had happened to me. I’d been left with a huge scar down the front of my torso and across my stomach. I’d also lost a great deal of weight and couldn’t eat much, so my strength had diminished.

My body was wider than it had been before, while my arms and legs were skinnier. Even now, eight months later, I still weigh less than I did before I became pregnant.

I came across the campaign photographer Sophie Mayanne on Instagram, and decided to get involved in the hope it would help me accept the changes in my body and boost my self-confidence.

The scar is a daily, disfiguring reminder of what happened, but posing for the photographs was part of the process of me becoming more comfortable. I also hope it will help remove the stigma surrounding scars. The more we see people whose bodies are ‘different’, the more normal they become.

Now that eight months have passed, the shock has worn off and I feel so grateful to be alive and able to spend time with Amelia. If I hadn’t been so ill I’d have felt the pressure to diet and exercise until my body returned to normal, but I haven’t had a choice – I’ve had to treat my body with gentleness as it gradually recovered.

I’ve learned that we often miss the bigger picture. The first few months of motherhood should be a time to enjoy with loved ones, not a race to regain our old bodies. 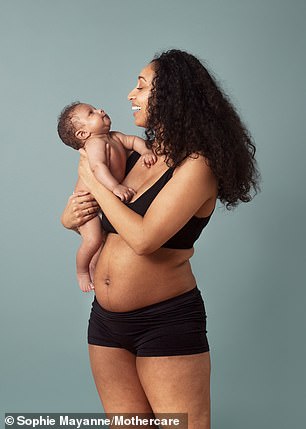 Chantelle Prince, 33, is a teaching assistant. She lives in London with her partner Ivor, 50, who works in music production, and their son Thierry, 16 weeks

Chantelle Prince, 33, is a teaching assistant. She lives in London with her partner Ivor, 50, who works in music production, and their son Thierry, 16 weeks. She says:

As a part-time model and former professional dancer who performed at the 2012 London Olympics, I’m used to being in skimpy costumes and having my body on display.

So I was excited about appearing in the Mothercare campaign, even if it meant revealing my podgy post-baby stomach which, from certain angles, still looks as though a baby could be inside.

I wanted to celebrate having my baby and the amazing work my body did to grow and give birth to him. I don’t mind the inches I can pinch around my middle because they’re a reminder of Thierry.

The culture we live in puts so much pressure on women to look a certain way, even when we’ve just given birth, which is a time we’re at our most vulnerable. We should be kind to one another, but sadly, it’s often women who are negative about other women.

I’m confident about my body now, but I know how it feels to be cripplingly self-conscious. Growing up, I hated my body because I was so skinny. I’d eat packets of cakes and drink pots of cream to try to put on weight. I’m thankful for the fact social media didn’t exist when I was a teenager, because I think seeing endless photographs of celebrities showing only the most positive aspects of their lives would have made me feel so much worse.

I worry that younger women aren’t being exposed to images showing ‘flaws’ such as cellulite or stretch marks. Instead, they’re being taught that they’re ugly or abnormal. I don’t want my 16-year-old niece to think that way about herself. I hope the campaign encourages people to be more open with their own experiences of the less Instagram-friendly aspects of motherhood and womanhood in general. Constantly trying to live up to unattainable standards is exhausting and self-defeating.

The images may shock some people but I’d like to think that in the future, people will look at pictures of women’s bodies after giving birth and feel nothing beyond ‘That’s human’.