Tucked away behind a labyrinth of corridors, behind double doors and banks of hand sanitisers on the sixth floor of the Royal Free Hospital in north London is a school.

A real school with classrooms, books, white boards, a full sweep of GCSE subjects and real children aged between five and 16 – all of whom are dealing with more daily challenges than anyone deserves.

Some are in-patients, suffering from long-term chronic illnesses, which see them in and out of hospital for much of their childhoods.

Others have mental issues that make mainstream education in the local schools too much of a challenge, or they have simply missed too much school through illness and need the extra teaching and pastoral support in a specialist classroom.

Making a difference: A teacher at the hospital school speaks to a volunteer at the Royal Free Hospital Children’s School in north London

Many more are too ill or too young actually to make it to the classrooms, so are given bedside tuition.

The Royal Free Hospital Children’s School (RFHCS) has a dedicated and talented teaching staff of 12 led by headmaster Alex Yates.

But even so these children would have little chance of a decent education without the help of a dozen or so brilliant volunteers.

Last month, the school won a Helpforce award thanks to its ‘exceptional partnership’ with volunteers who help with everything from teaching to cooking clubs and drama workshops.

Ann Chappet has been a Royal Free Charity Volunteer for more than two years. She was a primary school teacher in north London for 42 years before retiring and now spends every Friday in the paediatric wards teaching children between six and 12 at their bedsides.

Every day, every child in the hospital will be seen by a teacher – either paid, or a volunteer like Ann.

‘Some children are here for a few days, some for months and months and months. Some are confident, others are shy,’ she says. ‘So it’s very important to keep them learning and help them feel valued.’

Ann teaches between three and six children a day and starts her ‘round’ by visiting each child, chatting to them about their friends, school and what makes them tick.

‘You don’t know the child,’ she says. ‘They might not think they want to learn so you have to think on your feet. But that’s what teaching should be.’

They might start with a spot of maths, or a game, some poetry or science – everything one-on-one and bespoke.

‘You have to be flexible,’ says Ann. ‘A child with a cannula can’t use his or her hands, so we’d do an oral lesson rather than use the table.’

Doctors and nurses are constantly interrupting and anxious parents are hovering – though some take the opportunity for a desperately-needed break.

Poorly children flag quickly and Ann is experienced enough to see when a child’s had enough.

‘I say to every child, “When you want me to go – just say,” and they do,’ she explains. ‘But they never talk about their illness. Never mention it. The only thing they might say is, “I’m a bit tired now”.’

Keeping on top of a child’s education is crucial to mental and physical wellbeing. A staggering 14 per cent of school children have a long-term medical condition.

As a result, they feel isolated from friends and family and day-to-day lives. Their confidence plummets, anxiety levels rise and they can feel lonely and depressed.

On top of all that, when they finally return to their school, they can find themselves struggling not just with the work, but with their peers.

‘We all need to belong somewhere, and this gives them a community,’ says Alex the headmaster, who is on the paid staff and looks like he works round the clock to help his pupils. ‘Children missing education are the most vulnerable,’ he adds.

‘If you fall off the education ladder in this country, it’s desperately difficult to get back on, particularly when you’re over 18.’ 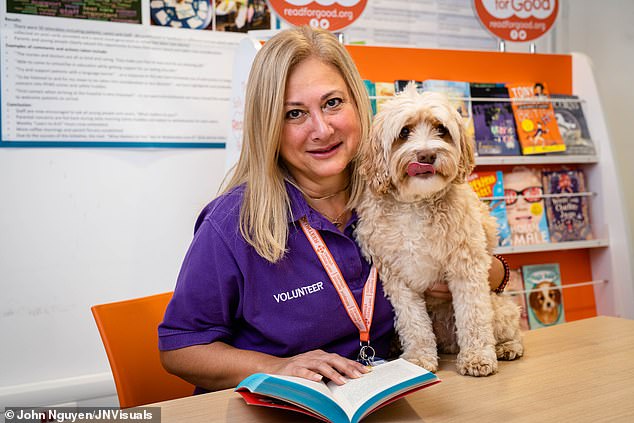 Shiva Bernstein, 60, a mother-of-three, has been a Royal Free Charity Volunteer for seven hours a week for more than two years and brings along her cavalier/poodle cross, Rolo

While most hospitals have an education provision of some sort, only a handful have an actual school with regular school times and terms and holidays.

Alex and his paid and volunteer staff offer the core GCSE syllabus, liaise closely with the children’s regular school and will bend over backwards to provide non-core subjects that interest the children.

Every teacher covers at least two subjects, but the school would struggle without volunteers. While some, like Ann, are qualified teachers, many are not – working as classroom assistants.

Just like any school, there are endless after-school activities including everything from script writing to drama, cookery, chess, knitting, basketball and a four-day residential outward bound course.

‘I’ll speak to someone at the Royal Free Charity and say, “I could do with someone with a background in drama, music, chess, knitting, pretty much anything”,’ says Alex.

Shiva Bernstein, 60, a mother-of-three, has been a Royal Free Charity Volunteer for seven hours a week for more than two years – even though she had no previous experience of teaching children.

Today she is a crucial part of the team. ‘The teacher teaches and I support the students as they work,’ she says.

Shiva also brings along Rolo, her five-year-old cavalier/poodle cross, who is registered as a Pets As Therapy (PAT) dog and breaks down barriers – helping to make everything feel more normal.

‘I am very happy to make a difference,’ says Shiva. ‘This is my hospital. All three of my children were born here. I wanted to give something back.’

Even without Rolo the dog, the school is a warm and friendly place.

Matt the staff musician is giving a guitar lesson to a boy in the hallway. There are books everywhere, displays for Black History Month on the wall, photos of the older students’ recent Outward Bound trip and an entire board plastered with thank you letters from former students and their parents.

Many here are suffering from anorexia, anxiety disorders, psychosis and depression, but the school is working wonders.

This summer, one student, Lilly, gained 11 excellent GCSEs, with 9s in English language and English literature. Almost half of the pupils passed ten or more GCSEs with grades of 4 or higher – quite a feat considering many GCSEs were completed in just one year.

Most go on to university – of last year’s 13 graduates, 12 are still in further education. The pupils’ gratitude is palpable. ‘Everyone is understanding and caring to others, despite overcoming their own barriers,’ says one pupil.

‘They are more open-minded when it comes to the subject of mental health and give support for everyone’s needs,’ says another.

When one pupil, Hermione, won the school’s Jack Petchey Achievement Award for her consistently positive approach to her work and infectious sunny disposition, she spent the prize money taking all the pupils out to lunch at Nandos.

While some are here for years, others can be here just a day or two; often the children are in crisis.

Alex and his specially trained staff are good at spotting the ones who need help – some staff have suicide training – and showing them that someone cares and is there to talk to.

Alex says: ‘Volunteers represent another adult who isn’t a doctor or a parent, who has come to take an interest and to normalise their experience – because it’s pretty odd coming to school in the middle of a hospital!’

Back on the wards, Ann is doing everything to ensure that her pupils’ learning is moving forward at a time when the rest of their life can feel on hold. She loves every minute of it.

‘You get a great sense of satisfaction. You come away feeling good!’

But most of all, she’s humbled – by the school, by its very hard working staff. And by her brave young charges who never, ever complain.

Both Ann and Shiva are making a huge contribution. So, too, could you.