Our four-legged friends offer perfect companionship. But some very special dogs provide even more. Therapy dogs comfort and bring joy to patients and their relatives in hospitals, care homes and hospices.

They may not have been to medical school but that doesn’t stop them providing the best medicine. They alleviate anxiety, aid recovery and, of course, administer boundless fun.

Now, the Sue Ryder charity has partnered with Pets As Therapy, the organisation which assesses therapy dogs, to find the country’s most caring pooches. Here, Tessa Cunningham.

A SIXTH SENSE FOR WHEN THE END IS NEAR

Mabel, a four-year-old cockapoo, lives with Debra Ellison, 62, a retired nurse, and her husband Denis, a retired electrical engineer, also 62, in Biggleswade, Bedfordshire.

Debra says: When it comes to caring for patients, Mabel is a natural. With her waggy tail, her exuberant nature and her gorgeous furry coat, she is the best stress-buster you can imagine.

And, as we all know, reducing anxiety and bringing down blood pressure helps reduce pain. We bought her on a whim in December 2016. She passed her assessment by Pets As Therapy when she was 12 months old.

She had to demonstrate that she could walk on a lead nicely, be groomed without a fuss and not jump up. We immediately volunteered at a residential home for the elderly. It suited us both brilliantly.

Mabel, a four-year-old cockapoo, lives with Debra Ellison, 62, a retired nurse, and her husband Denis, a retired electrical engineer, also 62, in Biggleswade, Bedfordshire

The residents adored her — some had left beloved pets at home, so Mabel was a wonderful substitute to cuddle and play with. She was particularly good for patients with dementia.

Just stroking a dog helps stimulate the brain. Staff told me patients chatted more when Mabel was around because they would tap into memories of their childhood.

And Mabel is so friendly she loved it when one resident insisted on lying on the floor beside her, literally nose to nose.

We visited every two weeks until March 2019, when I started taking Mabel to Sue Ryder St John’s Hospice instead. A dear friend spent her last days there, and I saw how much joy she and other residents got when I took Mabel in.

We have been visiting once a week ever since, Covid restrictions permitting. After nursing for 35 years — although officially retired, I’m now working at a vaccination clinic — I pride myself on my communications skills.

But they are not a patch on Mabel’s. She has an uncanny way of sensing people’s moods and can tell  when patients are very close to the end. Instantly, she becomes exceptionally calm and sits very quietly. You can feel the tension lift.

Millie is a four-year-old labrador. She lives outside Huntingdon, Cambridgeshire, with Rosie Darby, 74, a widow.

Rosie says: I picked up Millie the day before my husband died four years ago. It was a traumatic time. Kit, a farmer, was only 67 when he died of cancer. He was the love of my life.

I wondered how I would cope with a tiny puppy. But Millie managed to make me smile even on the toughest days. I was convinced that she could do the same for other people. For the past three years, she has been visiting both the Sue Ryder Thorpe Hall Hospice and the Cavell Centre, an NHS secure unit in Peterborough for people with severe mental illness. 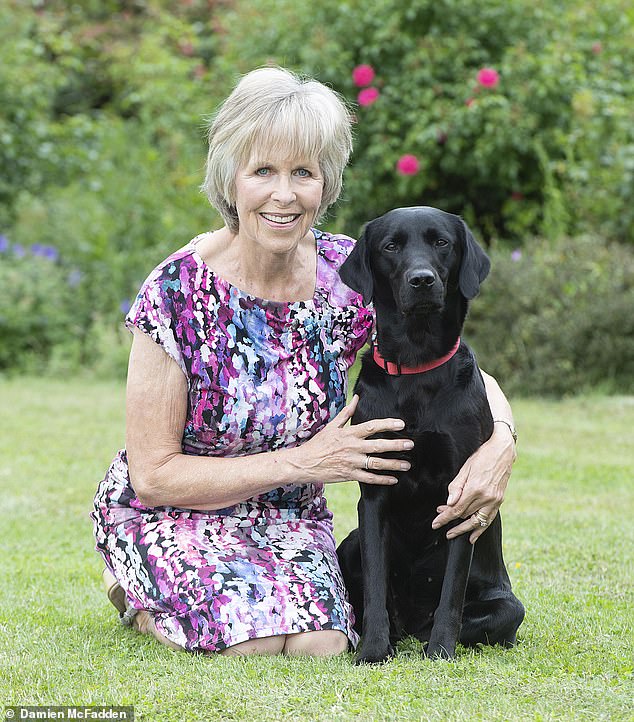 Millie is a four-year-old labrador. She lives outside Huntingdon, Cambridgeshire, with Rosie Darby, 74, a widow

But whether you suffer from mental illness or are close to death, it’s an intensely stressful time. Millie is so gentle. One woman with mental illness was very agitated when we arrived. The instant that she saw Millie and cuddled her, she calmed down.

Dying people are often lonely — not everyone has visitors. So when we visit the hospice, I will chat while they stroke Millie. You can see the tension lift.

They often tell me about their dogs. One lady was very close to death when we popped into her room. She asked if I would put Millie on her bed to be stroked.

She was terribly weak but she smiled and said: ‘This is the best medicine.’ I was close to tears. Millie is fantastic with children, bounding off with them into the garden, allowing their parents to spend precious time with relatives.

She is brilliant at lightening the mood. One day I was in the kitchen, talking to a patient’s wife, when Millie noticed a huge bowl of custard. Two seconds later it was all gone and Millie was wearing the telltale signs all over her face.

COAXING A SMILE FROM STROKE VICTIM

Mungo, a seven-year-old golden retriever, lives in Knebworth, Herts, with Mary Wilson, 73, a retired nurse, and her husband Robert, 70, a retired businessman.

Mary says: Mungo adores his job. What dog wouldn’t when it involves running after balls for hours on end? It might sound fun but it’s a vital role. For the past five years we have been volunteering once a week with stroke victims at the Sue Ryder Neurological Care Centre in Stagenhoe.

Guided by physiotherapists, patients battle hard to regain mobility, which means they need to do repetitive tasks like throwing a ball. It’s intense but Mungo thinks it’s the best treat ever and makes everyone laugh with his eagerness. 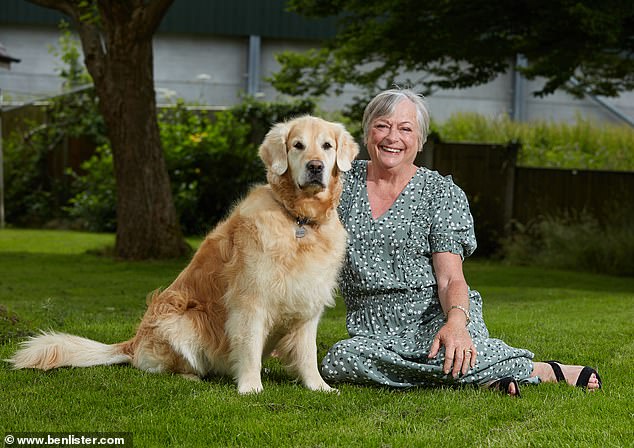 Mungo, a seven-year-old golden retriever, lives in Knebworth, Herts, with Mary Wilson, 73, a retired nurse, and her husband Robert, 70, a retired businessman

He can also be very calm. He’ll stand stock still and let strangers groom him. Using a brush is another great therapy for patients learning to regain mobility in their hands and arms. As a trained nurse, I know patients progress much faster when they enjoy therapy — and Mungo makes everything fun.

He was diagnosed with elbow dysplasia when he was eight months old and had an operation and six weeks’ bed rest. He instinctively knows what patients need. Last week we met a man who was depressed after his stroke. Mungo put his head on the man’s knee for a pat. Staff said that it was the first time they’d seen him smile since he arrived.

COMFORTING THE DYING, ATTENDING THE FUNERAL

She says: I’m happy to admit I’m just the object on the end of Buddy’s lead. No one gives me a second glance when he’s around. He is the star of the show. He has such an adorable nature it’s impossible not to feel a little cheerier when you see him. And that’s vital in his job.

Every week for the past two years we have been visiting terminally- ill patients at the Sue Ryder Manorlands Hospice near Keighley. When I first got Buddy as a puppy seven years ago I was volunteering as a befriender, visiting dying patients. It was challenging and exhausting work but very satisfying. 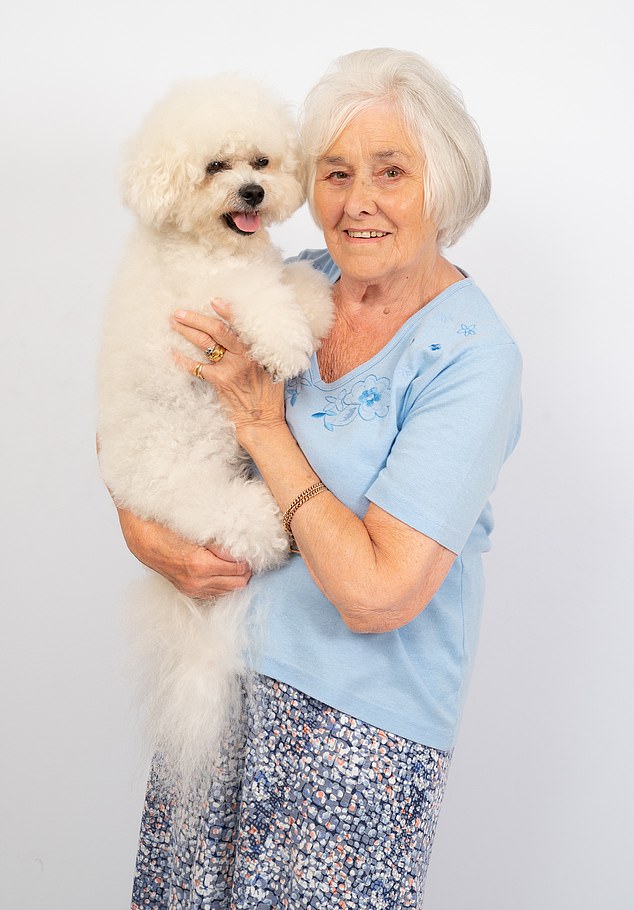 Then someone suggested that Buddy come along. I knew he would make a good ice-breaker. However ill you are, it’s always nice to reminisce about childhood pets. But the difference Buddy has made is phenomenal. He does more than I ever could to comfort and relax people.

He loves attention and is born to give pleasure. His favourite trick is to stand on his back legs and waggle his front paws as if to say hello. As soon as we walk through the hospice door, Buddy knows he is on duty.

We visit each of the 20 patients. However ill they are, people almost light up when they see this little fur bundle appear round the door. He will happily jump on their beds for a stroke and a cuddle or a tummy tickle. They are often frightened and in pain but are still able to smile, which is the best thing we can ask for.

You can sense their stress levels dropping. One elderly gentleman took such a shine to Buddy — who reminded him of his own beloved dog — that when he died, we were invited to his funeral. Buddy had pride of place in the front pew.

THE BLONDE BOMBSHELL WHO IS BRINGING JOY

Eva, a four-year-old cocker spaniel, lives in Aberdeen with Jon Turnbull, 63, a retired engineering manager, and wife, Angie, 61, a retired nurse. They have three daughters.

Jon says: Eva is known as the Blonde Bombshell at Sue Ryder’s Neurological Care Centre in Aberdeen where we’ve been volunteer ing for three years. When she i s happy — most of the time — her whole body wags.

Most patients have limited communication and mobility. But Eva just wants a cuddle. Many are in hospital long-term. So they crave a bit of normality, which Eva offers in spades. They also want physical contact. Eva will sit on people’s laps.

I was determined to sign her up as a therapy dog after seeing the difference she made to a friend’s life. My friend Steve Morrison suffered from multiple sclerosis and was cared for at the Sue Ryder home until he died in 2019. I visited regularly and first brought Eva to see him as a puppy. 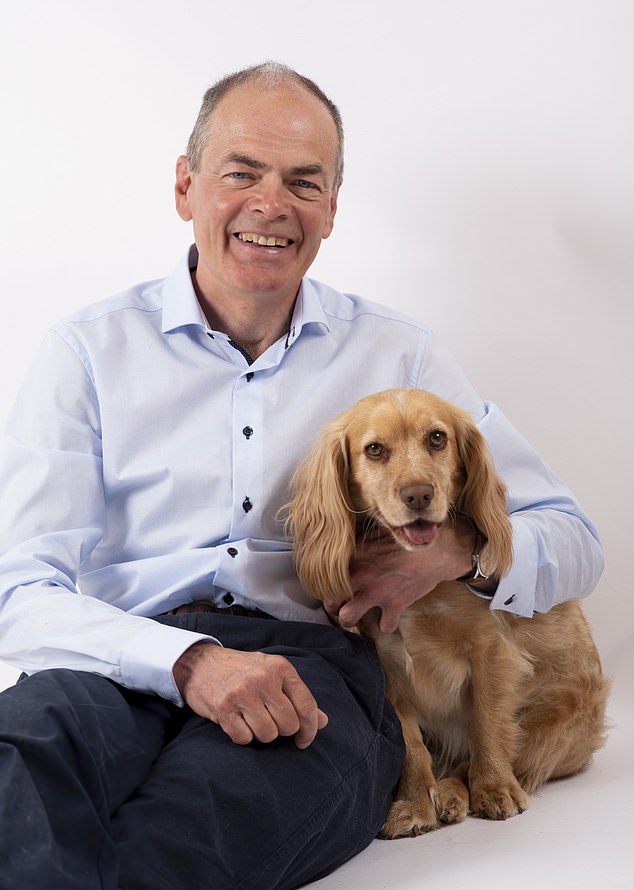 Eva, a four-year-old cocker spaniel, lives in Aberdeen with Jon Turnbull, 63, a retired engineering manager, and wife, Angie, 61, a retired nurse. They have three daughters

I saw first-hand the pleasure he got from watching Eva and stroking her. When Steve died, the staff suggested I carry on visiting. She passed her therapy assessment and we hav e be e n volunteering ever since.

Eva got hit by a car last autumn, while chasing a pheasant, and broke her leg. The patients made her special doggy flapjack biscuits and drew cards for her.

It made me realise how special she is. Steve would be delighted to know that Eva is bringing joy to people.

A PARALYSED PATIENT — THEN HE CUDDLED RUBY

Maria says: I work with patients with severe neurological conditions at a specialist Sue Ryder care home. I love my job so much I of ten visit the patients on my weekends off.

I got Ruby as a puppy and when she was six months old, I decided to bring her into the centre to say hello. I thought it would be a one-off but she had an amazing effect on the patients. 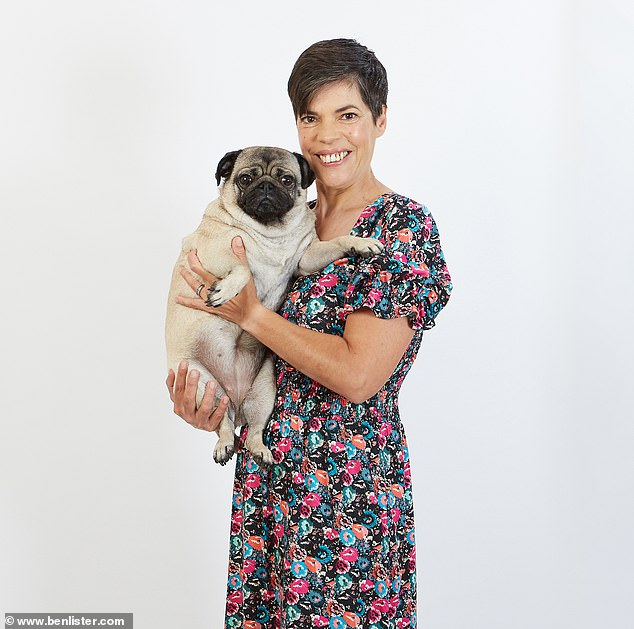 I’ve taken her in at least one afternoon a month since. Bill, a lovely gentleman in his 60s, was so badly paralysed by a rare neurological disorder, he had barely any mobility in his arms. But when I put Ruby on his lap that first time, something clicked. He inched his fingers towards her and started cuddling her.

The nurse said she had never seen anything like it. After that, Ruby always went straight to Bill’s room and put her head against his chest for a stroke. The look of love between them was magical. Bill could not talk but his face would light up as soon as he saw her appear.

Just the simple act of stroking Ruby also helped him improve his movements. His partner was so grateful she knitted Ruby a jumper at Christmas. All dogs love attention but what makes Ruby so good at her job is she is happy to be petted by total strangers.

She is also very empathetic. Staying calm when necessary, lying still to be petted and not wriggling can be exhausting for her. When we get home, she lets off steam with a long run in the park.