‘They wear me out’: Prince Charles, 70, jokes about keeping up with his grandchildren

The Prince of Wales has joked about keeping up with his grandchildren, saying they ‘wear me out’.

Charles has three grandchildren, and a fourth on the way but they seem to be a handful for the heir to the throne.

The prince sympathised with mother Amelia Kerr, 33, as she cradled her baby boy when he visited a toddler group at Dorchester Community Church, based in his model village of Poundbury in Dorset.

Ms Kerr said later he looked down at her four-week-old son Oliver Morris and said: ‘My grandchildren wear me out, I don’t know how you do it.’ 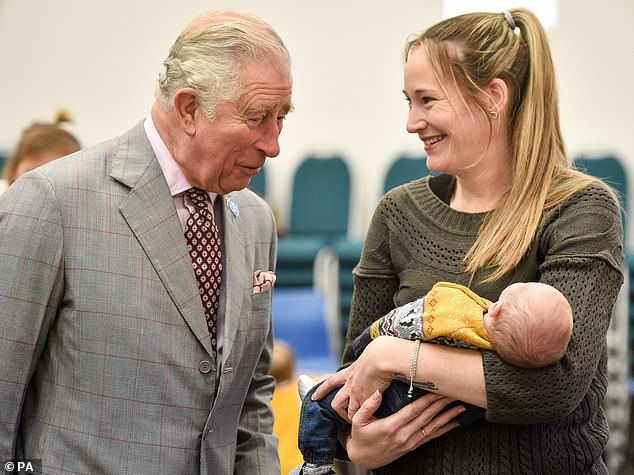 The Prince of Wales, who is set to become a grandfather for the fourth time, met Emilia Kerr and her four-week-old son Oliver Morris

The Duke of Cambridge has already said wants his father Charles to spend more time with his children Prince George, Princess Charlotte and Prince Louis.

Charles will soon be welcoming another member of his family as the Duke and Duchess of Sussex are expecting their first child next year.

During his visit to the church, Charles met mother and son puppeteers Sharon, 56, and Adam Pinder, 27, who with other volunteers put on Christian-based shows for the local community with their Ministry of Puppets.

Adam held up his puppet Bob for the prince while his mother worked a sheep toy.

She said later: ‘He asked if we do the voices but my husband Andrew tends to do them.

‘We find that children and adults tend to enjoy the shows and we have fun putting them on.’

And while it is almost two weeks since Prince Charles turned 70, but it seems that celebrations were set to continue during his visit to Poundbury on Monday. 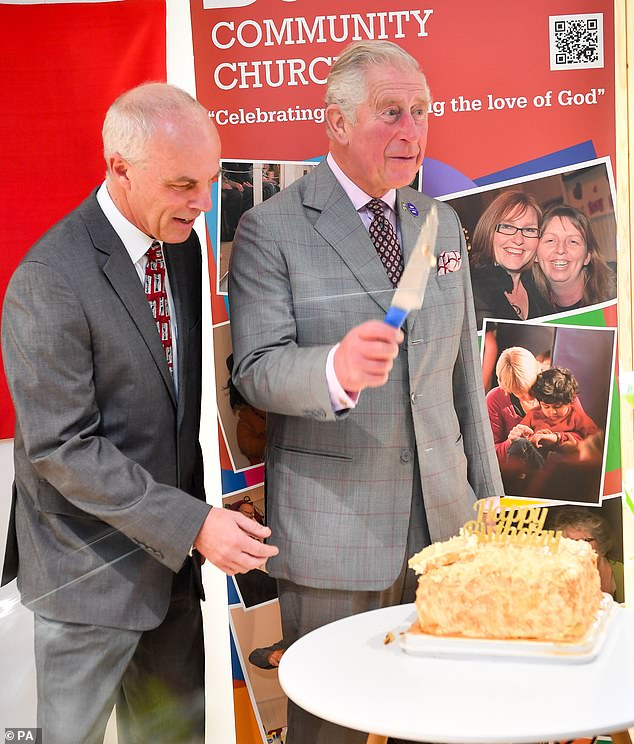 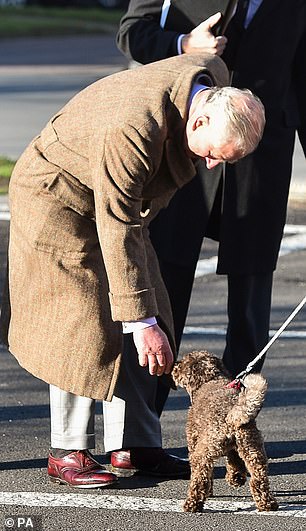 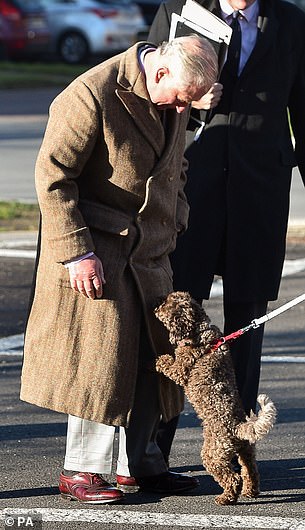 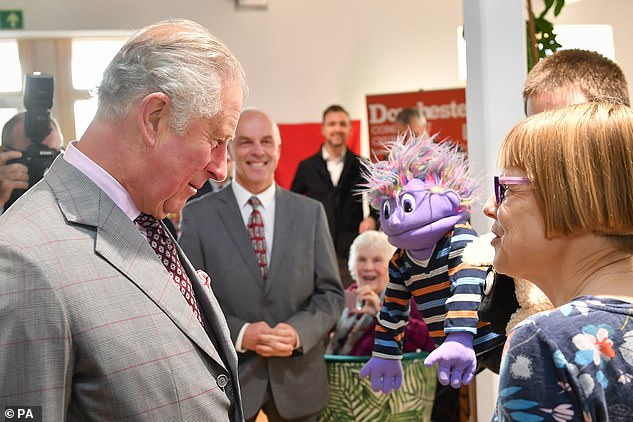 The Prince of Wales was treated to a belated birthday cake from locals as well as plenty of greetings card during his trip to the Duchy of Cornwall land in Dorset.

Upon his arrival he was met by hundreds of well-wishers who had gathered to welcome him to the village including an enthusiastic dog.

The heir apparent, who was wrapped up in a tweed coat, bent down to greet the pooch before making his way inside.

He was then introduced to Courtney Critchell and her son one-year-old Oliver Knight who had produced a colourful card for the royal following his birthday.

Following his visit to the Community Church Charles made his way over to the Yarlington Housing Group’s Extra Care housing development.

He paid a visit to the home of 81-year-old Lee Elford who appeared to have the prince in stitches as the pair chatted in his living room.

As he left the development the Prince of Wales was met by a group of schoolchildren who too had pitched together to make him a card following his 70th. 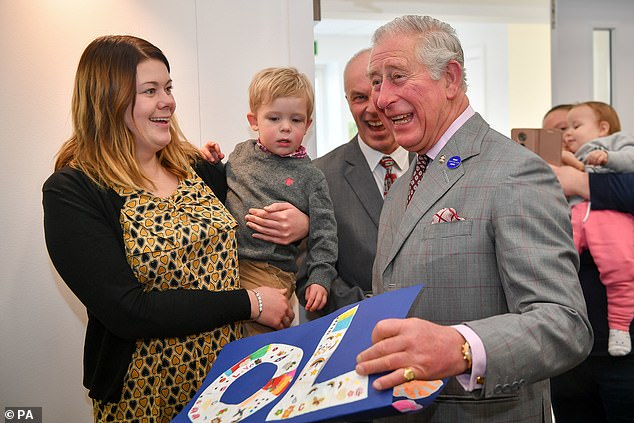 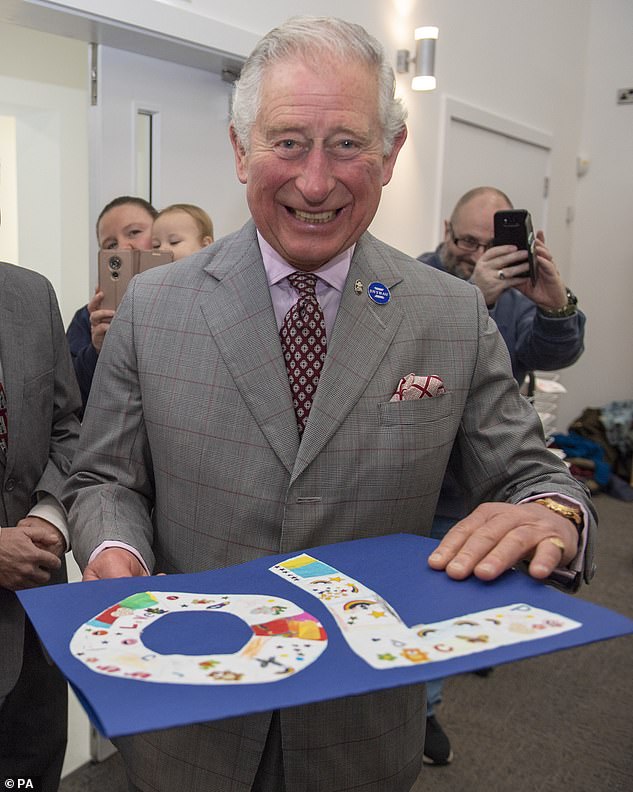 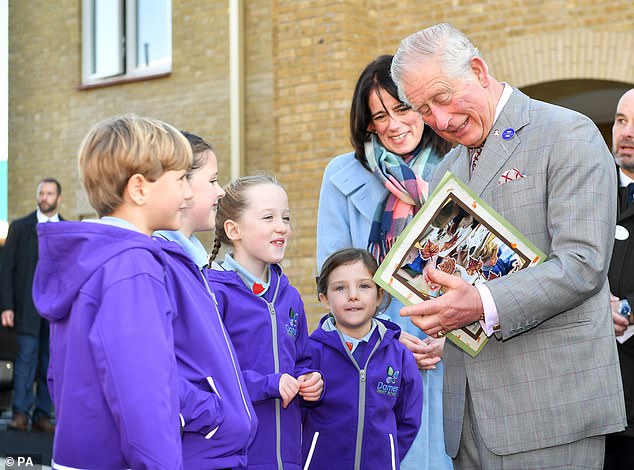 It featured photos of the local children painting autumn leaves and the royal appeared very touched by the gesture.

Poundbury was been created on the basis of architectural principles found desirable by Prince Charles.

It is a utopian idyll where there is no segregation of social classes, and schools, shops and places of work are within walking distance. 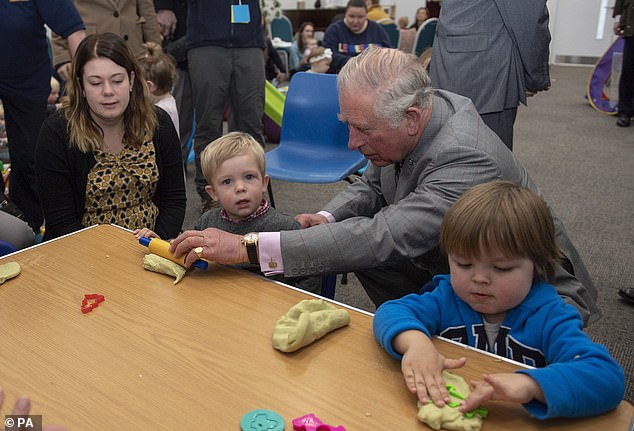 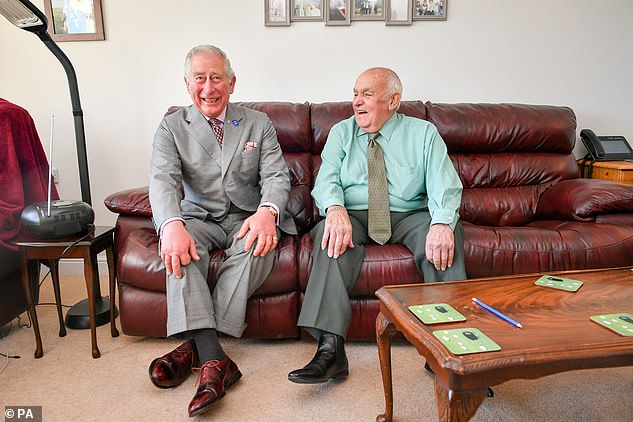 In a personal tribute the Queen Mother Square features a 10ft bronze statue of his late great-grandmother.

The square is also home to the pub called the Duchess of Cornwall, after Prince William’s stepmother Camilla who was absent from the engagement today.

The village’s overall plan was developed in the 1980s by Leon Krier, an architect from Luxembourg, and construction began in October 1993. 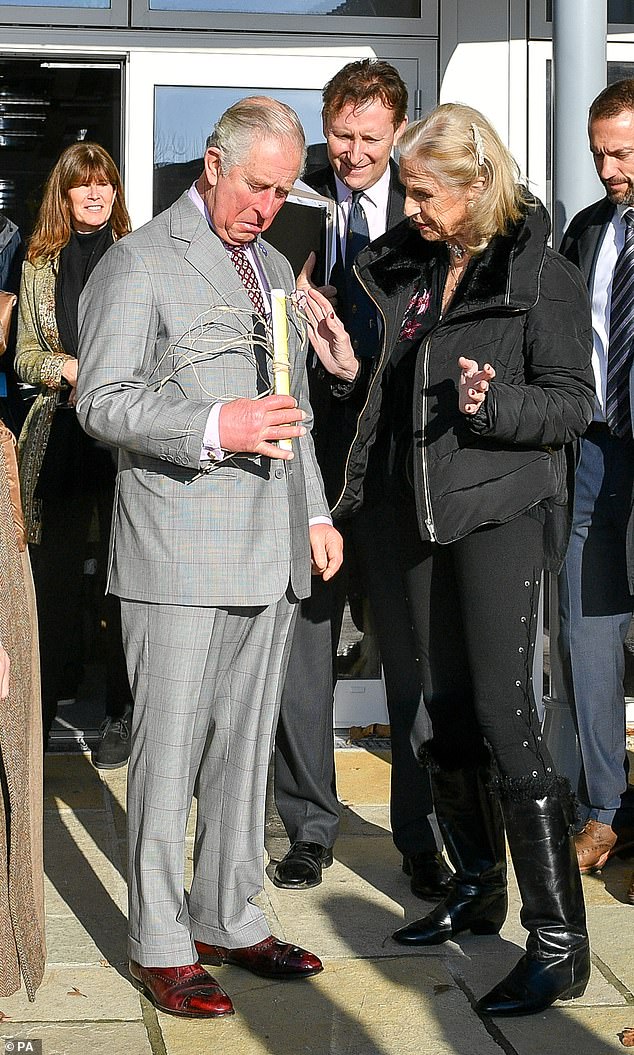