Jodie Kidd is one of those eternally glamorous souls, long of leg and chiselled of cheekbone.

She used to be a model, of course, and brings that professional poise and elegance to everything she does, even when it involves – as it often does these days – fast cars, boats or horses.

Isn’t this right Jodie? She’s so busy laughing she can barely respond. ‘I have to say this is the least glamorous thing I’ve ever been involved with. I can’t even say how unglamorous it was.’

Alas for those of us with delicate dispositions, she does try to sum it up. It’s quite ugly. It involves blood, blisters and bruises. There is numbness and nausea.

‘Your fingers end up raw, but you have to push through that. Your whole body aches. I don’t think I’ve ever ached so much in my life. My shins were battered, I was having migraines.’

Then there was the hunger – ‘the worst hunger you’ve ever experienced. We were burning 10,000 calories a day, you just can’t eat enough to keep up.’

Sleeplessness too, to the point of delirium. Come to think of it, there are parallels with childbirth and the fog of early motherhood.

‘That’s why the women did better than the men,’ she says. ‘If you’ve had a child you know about lack of sleep… and pain.’

Two teams of six (Jodie and Olympic gold-medallist Denise Lewis are the captains, and the teams are made up of men and women) embark on a rowing race the length of Britain.

Starting at St Ives in Cornwall they cover 500 miles, taking in the coasts of Wales and Northern Ireland, before finishing at Lochinver in the north of Scotland.

The boats are ocean-going R45s, capable of crossing the Atlantic, which have a small sleeping compartment but no toilet. 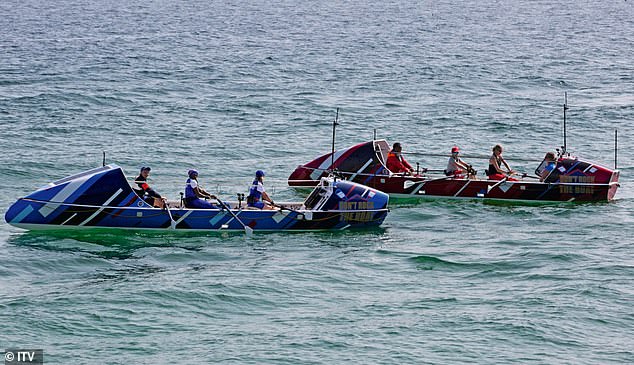 Jodie Kidd said they began filming in August but had the most horrific weather conditions. Pictured: The two teams set off in their boats

Four team members are in the boat for each of the eight legs, with at least two rowing at any one time while the others rest or sleep. Some legs took 30 hours, and the two team members not in the boat for a particular leg take part in physical challenges on land to win rewards for their crew.

They also had to take on the British weather – every variety of it. ‘We filmed in August and we started out in blazing sunshine,’ says Jodie.

‘But then we went straight into Storm Ellen. We had the most horrific conditions, but also some glorious ones.’

Freddie Flintoff, the cricketer-turned-boxer-turned-TV-presenter, was there too, but as presenter he was mostly on dry land. He speaks darkly of the brutality too.

During lockdown Freddie Flintoff wrote a book, Right, Said Fred, a bizarrely brilliant collection of his musings. If ever you want an everyman’s account of the often weird world of celebrity, this is it.

There are chapters on his bafflement about social media, toe-curling anecdotes about his sporting jaunts and surreal royal encounters. He ‘met’ Meghan Markle before she was famous.

‘I’d had a massive night out and was sleeping off my hangover on the sofa in my agent’s office. He came in and said, ‘Right, you’ve got to get out now. I’ve got this meeting with a girl off Suits.’

‘I found a sofa in another office and saw her walk in with a press pack and some books. My agent had to say to her, ‘I don’t know what I can do for you.’ But it turned out she had bigger fish to fry.’

He seems baffled by the Royal Family. He likes the Queen (‘she’s tiny, but has an aura like no one else I’ve met’), but says he can understand why a lot of people think they’re a waste of money.

‘Let’s face it, they haven’t exactly been covering themselves in glory these past few decades, and now we’ve got Harry resigning and Andrew being accused of all sorts. They’re in a bit of a pickle.’

‘I’m not sure if everyone underestimated how horrific it would be, but it was properly epic. Even on the first leg it was evident how tough it was.

‘It was choppy and everyone was chucking up. Even the lads who film on board day in day out were getting seasick.

‘It was a baptism of fire. But so much fun. I’ve done a bit of rowing – mostly on a rowing machine in my garage – and I naively said at the start, ‘If you need me to jump in a boat and do a bit, I will.’

‘Seeing the state of the others when they came off the boats, I’m glad they didn’t call on me. It was brutal. Proper brutal.’

Freddie’s co-host is AJ Odudu, best known for presenting roles on Big Brother and The Voice Kids. She’s young and gung-ho, into fitness and survival activities.

She’s a qualified personal trainer, and hardcore. Last year she took part in Celebrity SAS: Who Dares Wins, and had to have therapy afterwards, so intense was it to be hurled out of helicopters, plunged into freezing water and forced to carry 45kg weights uphill.

Even she agrees the participants on this show endured worse – not least the midges. ‘The midges in Scotland! I’d never experienced anything like it,’ she says.

There’s a picture of these three on location, and the two women are looking spectacularly unglamorous with huge nets over their heads. Freddie is bare-headed, though.

Did the midges not fancy him? ‘Oh, they ate him too, but he just wanted to look well hard,’ says AJ.

‘We had to take the nets off to do a piece to camera, it felt like one of those Bushtucker Trials on I’m A Celebrity…’

Today, we’ve got the three of them together for a more civilised photoshoot, and the banter is incessant.

While they can’t give away who won the challenge, which was filmed over three weeks, we can clarify that no one drowned. Jodie analyses why the women outperformed the men.

‘They were mentally stronger,’ she says. ‘It doesn’t matter how physically strong you are in a situation like this, it’s the mental strength you need to just keep going, even when your body is crying out for you to stop.’

So who are the other contestants? Well, they’re quite a mix, but none are rowers. As well as Denise Lewis there’s another Olympic gold medallist in Victoria Pendleton.

This one had Freddie scratching his head. ‘To be honest, when I first heard what the show was about I was saying, ‘Are you sure about this?’ There were a few names you wouldn’t associate with rowing. Tom Watson? Up against an Olympian? How will that work?’

Does he agree with Jodie’s assessment that the women won the day? ‘Well, they were the stronger rowers, but what’s interesting is that sometimes it didn’t come down to that. 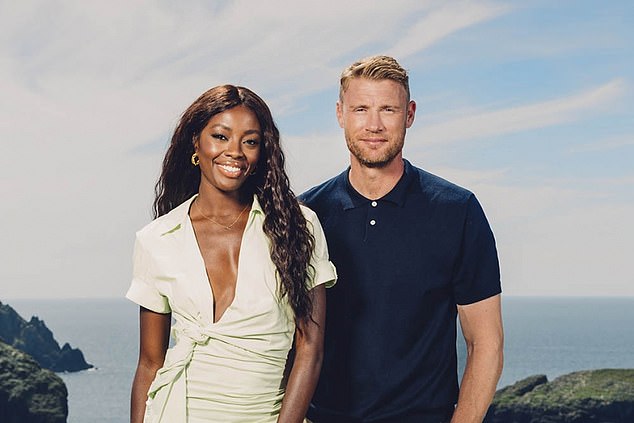 ‘Everyone had their challenges and brought something to it. Because it was a team thing, each team was only as strong as their weakest rower.’

Interesting also is that the show happened in the middle of a pandemic. All the participants had been in lockdown immediately before.

‘And then to be plunged into this intense experience was pretty full-on,’ says Jodie. She had to leave her nine-year-old son for the duration, ‘which was difficult, especially since we’d just been through lockdown’.

AJ admits she struggled too.

‘I’m single, so I spent lockdown completely on my own. Then suddenly I was with all these other people, and I didn’t know how to speak to them at first.’

All three talk of the exhilaration of getting out in the open air, and of a new admiration for the British coast.

‘We’d all been through this extraordinary time and there was a feeling of gratitude and sheer joy,’ says Jodie.

The show is another interesting one for Top Gear host Freddie Flintoff, whose status as a go-to presenter for all manner of outdoorsy stuff is now undisputed. He wears the air of someone who has ambled into the big time, which is a big part of his charm.

‘I only do things I’m really interested in,’ he says. Before this show he made his most harrowing and personal film yet, about a side of his life he’s been open about before – to a point.

Eight years ago he confessed he had an eating disorder which started in his cricketing days, when he was relentlessly teased about being chunky.

He hit on a way of losing weight – by throwing up his food after meals. Of course it was bulimia, although he didn’t know the term in those days.

Freddie Flintoff: Living With Bulimia saw him confront old demons and speak to other male sufferers.

It was a harrowing watch, and all the more powerful because he confessed he’s still in the grip of the condition, having had episodes as recently as a year ago, and revealed he’d sought professional help for the first time.

It’s not a subject he wants to get into today, understandably, but it is interesting that he agreed to make that programme given that he can be intensely private.

His fourth child, Preston (named after his hometown), was born around Christmas but, ‘I didn’t tell anyone, apart from family,’ he says.

‘I did an interview in Australia and the bloke said, ‘I understand your wife is expecting,’ and I replied, ‘Yeah, it’ll be brilliant when it happens.’ But he was already three months old. I just didn’t think anyone apart from family needed to know about it.’

His reluctance to shout about it, on social media or elsewhere, might have had something to do with the fact that it was clearly a traumatic time for the family.

Baby Preston had to spend time in intensive care, and Freddie says he will be forever grateful to the hospital staff who cared for him.

‘These people are not low-skilled, they’re some of the most skilled people I’ve ever met, both technically and emotionally. The baby spent a couple of nights in the intensive care unit and I was in awe of these people,’ he says.

AJ says working with blunt-talking Freddie was a tonic because they’re both proud Northerners (she’s a Blackburn lass) so ‘no translators were needed, he just got me’.

Early in her career AJ says she was advised that she should tone down her accent.

‘So many people said that to me, but I’m glad I didn’t.’ She’s now riding the crest of a wave that demands more diversity in accents, backgrounds and race on TV.

‘I hope so,’ she says. ‘Growing up, there just weren’t those role models that I could identify with. I hope that for the generation coming up behind me, it will be different.’

Don’t Rock The Boat is on Monday to Friday at 9pm on ITV.