‘They’re going to war’: On the frontlines of the battle to stop poachers killing rhinos

Professional game catcher and conservationist Les Carlisle describes his decades-long battle to save the rhino from extinction at the hands of poachers with one simple but frightening word: war.

Just hours before taking Daily Mail Australia out to electronically tag a rhino and remove its horn in South Africa’s Phinda game reserve, he doesn’t mince words about how dire and violent the fight to save the species has become.

‘Farmers are getting rifles out of their safe and putting on flak jackets with a head torch and going out to protect their rhinos,’ he said.

‘Wives don’t know if their husbands are going to come back. It’s war.’

Despite the best efforts of Carlisle and others like him, it’s a battle the animals are losing – and losing badly. Since 2008 more than 7,000 rhinos have been killed for their horn in South Africa alone at the rate of two deaths per day. 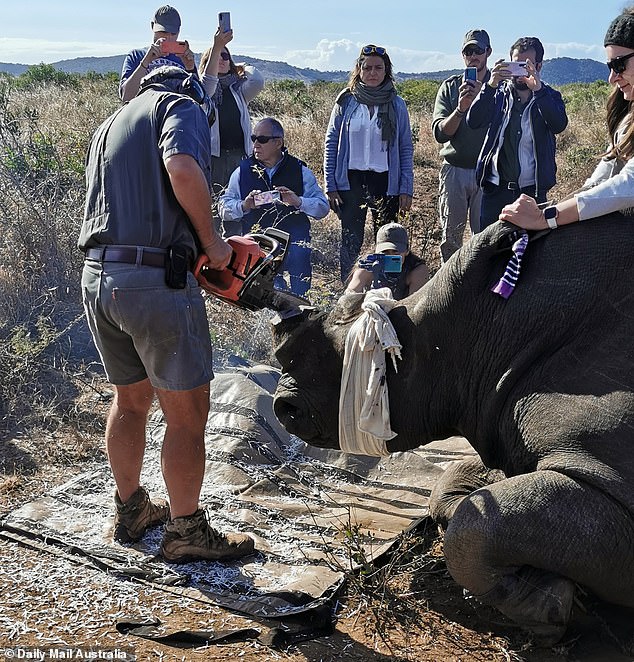 Other African animals are also under the gun, but rhinos are suffering in the extreme due to the sky-high value of their horn, which is used in traditional Chinese medicine and sells for $130,000 per kilogram.

‘That’s more than gold, more than cocaine, more than anything. It’s one of the most valuable commodities in the world,’ explained Carlisle, who is the conservation manager for the And Beyond tourism group that runs a host of game reserves on three continents

That incredible value is why he’s on a mission to de-horn as many rhinos as possible, as quickly as possible – and it can be very dangerous work.

HOW TO BRING DOWN SIX TONNES OF ANIMAL

Rhinos feel no pain when their horns are removed but the procedure can still kill the animal if it isn’t done properly.

The six-tonne beasts are immobilised by using a dart rifle to deliver a powerful drug that makes them lose control of their muscles but not lose consciousness.

‘We use a helicopter to guide them because once the animal’s darted, as it gets more drugged it loses the ability to control where it’s going and if it runs into a dam, it’s going to drown,’ Carlisle explained. 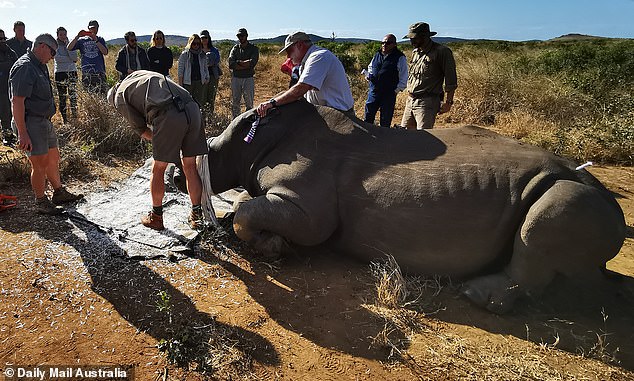 The dart that brings down the rhino (the white object on the animal’s rump) contains an opiate that’s 10,000 times stronger than morphine. The capture team that does the de-horning have to be extremely careful as getting one drop of it on their skin would kill them instantly

Thankfully there’s not a dam in sight as Daily Mail witnesses a big male staggering through the scrub while the drug takes effect.

A highly trained team of rangers Carlisle calls ‘the best rhino capture unit in the world’ wait until it drops slowly onto its belly before blindfolding it and putting earplugs in to reduce its stress. 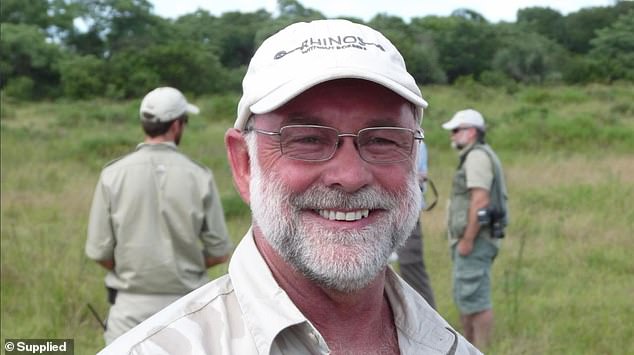 Tracking the rhino is key to keeping them alive and today the crew are trying something new: a radio frequency transmitter that’s attached to the animal like an earring and tracks and broadcasts its position using GPS.

It’s only the second time they’ve used one and the first attempt fails when they misjudge the size of the hole they need to punch through the hide. The second attempt is a success, however – and the rhino shows no signs of discomfort.

The rangers then place a plastic drop sheet under the rhino’s head before the veterinarian who fired the drugged dart puts on earmuffs and a visor and produces a chainsaw to begin the de-horning.

It’s a confronting sight that becomes even more disconcerting as the tool roars to life and is wielded with expert skill, shaving off slabs of the horn before whittling down the remainder with careful strokes that don’t touch the growth plate.

Rhino horns are like human fingernails in that they don’t hurt, and they grow back at the rate of about 10 centimetres a year.

The drop sheet catches most of the shavings but many of them litter the ground – and the substance is so valuable that the rangers can’t leave any of it behind.

They also can’t let their guard down once it’s in their possession.

‘You become a target as soon as you’ve got rhino horn anywhere near you,’ Carlisle said. ‘If you’ve got it, they (poachers) they’re going to bump you off to steal it. 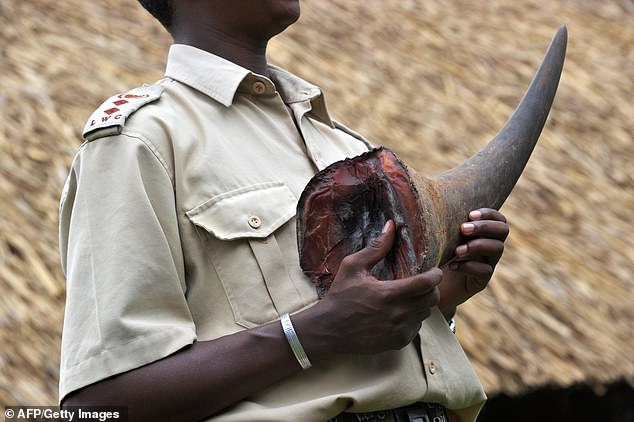 A ranger holds a black rhino horn taken from an animal shot dead by poachers. The criminals will even shoot de-horned rhinos so they don’t waste their time tracking them through the bush only to get no reward for their work

‘As soon as rhino horns are removed they get tagged, microchipped and shipped to the underground gold bullion vaults in Johannesburg because we’re not prepared to keep them here.

‘Farms have been hit, houses have been burnt down, families have been murdered to to steal the gun safe full of rhino horn.’

RUTHLESS CRIMINAL CARTELS HAVE NO LIMITS

With the horn safely removed, all in attendance back away and wait for the rhino to recover from the drug.

It’s an opiate that’s 10,000 times stronger than morphine – so potent that we are all warned that getting a drop of it on our skin will kill us instantly – yet the beast rises quickly to its feet.

The rhino’s priority is to ‘find its mates’, as Carlisle puts it, and he’s soon trotting off in search of the female and calf he was with before the rangers intervened.

But despite the fact his horn is gone and he’s within the secure confines of the fenced-off reserve, it would be a mistake to think he’s safe.

Poachers who track rhino only to find they’ve been de-horned usually shoot them dead anyway so they don’t make the mistake of tracking them again when there’s no reward in it for them.

And while Phinda is extremely well policed, it’s not invulnerable.

‘Incursions by poachers are regular,’ Carlisle said. ‘Arrests before they get to the park are more regular.’ 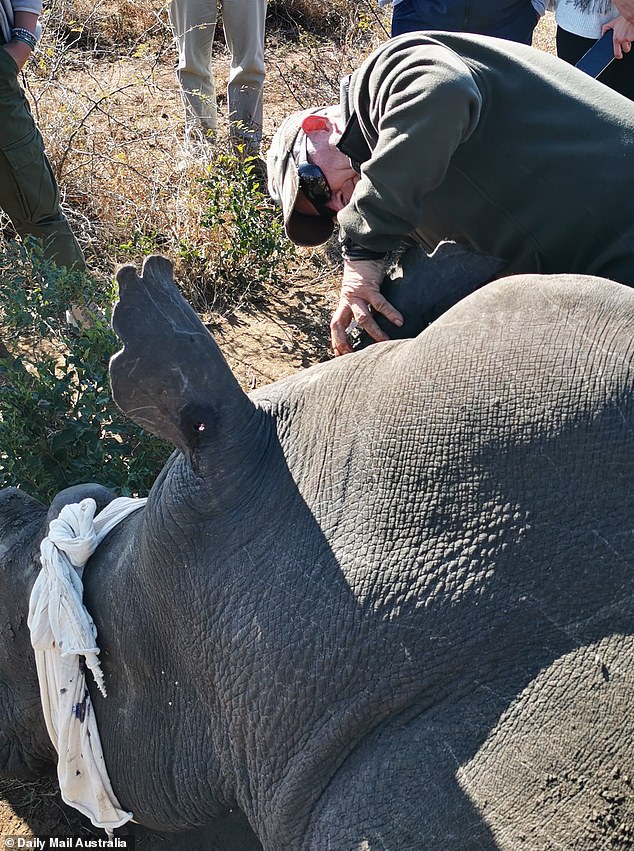 A veterinarian places an electronic tag in the rhino’s ear so its movements can be tracked. This is only the second time one of the new devices has been used on one of the beasts

Despite those arrests, the poachers are able to keep killing because they’re directed and backed by powerful criminal cartels.

‘The police forces of the world have never been able to take on criminal syndicates – how do you expect wildlife to take them on?’

A RADICAL SOLUTION TO THE POACHING PROBLEM

Carlisle favours another way of tackling the rhino killers, although he’s quick to point out it’s his personal view and not that of And Beyond: legalising and regulating the trade in horn instead of trying to stamp it out.

‘We’ve got to break the cycle – there are only 5000 rhinos left,’ he said. ‘It doesn’t make sense not to be countering the illegal market.’

The idea is to harvest the horn without killing the animals and use the stockpiles in those gold bullion vaults to gain control over the price and make the rhinos more valuable alive than they are dead – the opposite of the current situation. 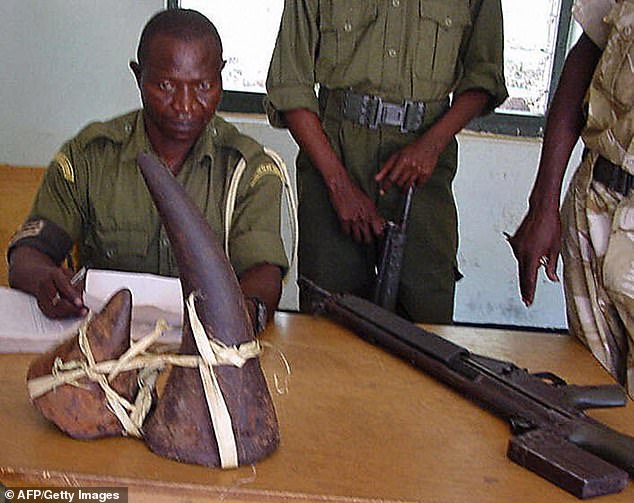 A park ranger with black rhino horns taken from poachers who were shot dead by park security. Farmers who have rhinos on their land also risk their lives to save them from being killed and mutilated for profit

Ten years ago South Africa lost 10 to 15 rhinos a year, but that soon increased massively and the country lost 1275 in 12 months.

Carlisle believes that the huge spike might be explained by the state of Asia’s stockpile of horn; it was huge after a surge in poaching during the 1980s, but got run down and he believes the killers are ‘taking out whatever they can’ to build it back up again.

But if the country was allowed to use its own reserves – and continually top them up with non-lethal harvesting – the poachers’ business model could be ruined.

Doing so is expensive. The de-horning and tagging Daily Mail witnessed cost $45,000, covered by the Chinese mobile phone maker Huwawei, which also provides ongoing support to Les and his crew.

But the catch-and-release method is just one weapon in the conservationists’ armoury.

According to Les, the most effective method of making poaching a thing of the past is supporting local communities who then in return alert rangers as soon as they see anyone suspicious.

‘We use the iron fist in the white glove,’ Les explained. ‘If anyone crosses the reserve’s fence, iron fist as hard as you can on them, but use the white glove to prevent them from entering in the first place.’