Even in the small hours, Ibiza’s giant Pacha club was heaving. Lasers flickered over the sweating crowds, picking out celebrity clubbers including Naomi Campbell, Kate Moss and Paris Hilton as the music thumped.

Pushing his way across the dancefloor, ducking to dodge the half-naked acrobats swinging from the ceiling, came a giant figure of a man – 6ft 5in of well-groomed, Harvard-educated millionaire. Then, as if this weren’t strange enough, the giant was joined at the bar by a doppelganger, a second square-jawed athlete. Both seemed to have stepped from the pages of a Ralph Lauren catalogue – two Great Gatsby characters transported to the ear-splitting chaos of an Ibiza nightspot. Tyler Winklevoss and his identical twin brother Cameron were already famous thanks to their protracted battle with Facebook billionaire Mark Zuckerberg and its dramatisation in The Social Network, the Hollywood movie about the creation of the site. And it was as they were getting ready to leave that they were recognised. A wild-eyed, muscular guy with a heavy Brooklyn accent accosted them. He seemed to know about their wealth and history and said he had a big idea. The twins weren’t interested – until the stranger with the Brooklyn accent said something that struck them hard: ‘Facebook isn’t revolution any more. Facebook is the Establishment.’ 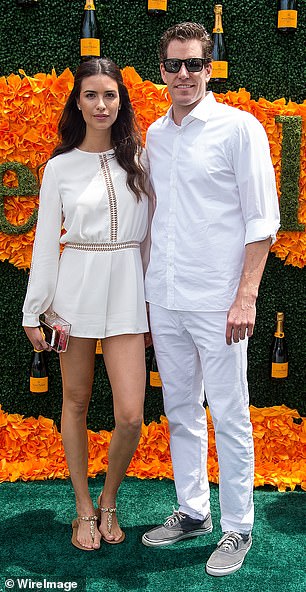 Tyler and Cameron Winklevoss were still only 31, but they had money to invest. Lots of it

‘So what’s the idea?’ asked Cameron. ‘Another social network?’

The guy pulled a dollar bill from his shirt pocket.

‘The oldest social network on earth,’ he grinned.

Tyler and Cameron Winklevoss were still only 31, but they had money to invest. Lots of it. It was only a year since Zuckerberg had paid them $65 million following one of the most famous legal battles on the planet. They’d always been an unlikely match-up. Zuckerberg was nerdy and socially awkward; the handsome Winklevoss brothers were twin embodiments of America’s East Coast elite who, already blessed with ‘brains the size of houses’, would go on to become members of America’s 2008 Olympic rowing team in Beijing.

Two years later, they competed for Oxford in the Boat Race. Yet it was Zuckerberg who was making the real name for himself. From murky and contested origins, he was turning Facebook into one of the most powerful companies on Earth with a staggering 2.3 billion users.

The problem, though, was this: the Winklevosses believed the idea for such a network had been theirs and that Zuckerberg had effectively stolen it from them. In 2011, after years of wrangling – which included a bizarre threat from Zuckerberg to ‘f*** them in the ear’ – they reached a settlement. Zuckerberg could certainly afford it as by this time his fortune was an estimated $15 billion.

For the twins, this was a new beginning. It was a chance to disentangle themselves from the poisonous battles of the past four years and, as author Ben Mezrich explains in a compelling new book about the brothers, it brought the prospect of revenge in its sweetest known form – success. 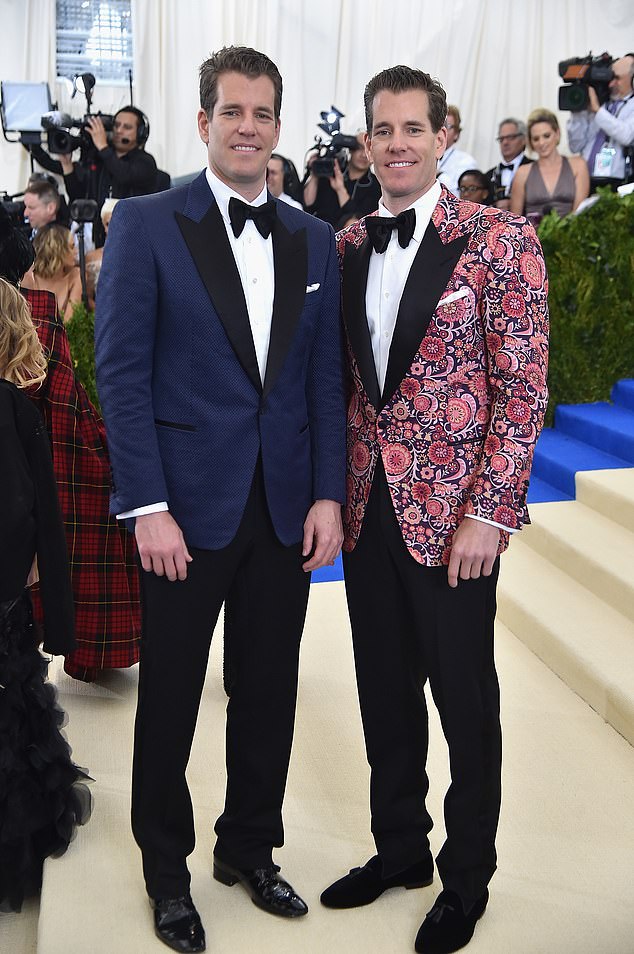 Tyler and Cameron were cautious, replying that Bitcoin was just a gamble and that few get rich by gambling. ‘True,’ said Azar with a grin. ‘But you do get rich if you own the casino’

Yet, as Mezrich reveals, Zuckerberg cast a long shadow, something the twins would find out for themselves as they started to explore the strange new world of the technology boom. On one occasion, for example, they flew out to Silicon Valley in California to meet with a tech wizard looking for investors. Their appointment, it turned out, was in a burger bar with a nervous-looking red-haired young man called Jake. It was the sort of place where the whizzkids and tech geeks came to eat and talk between working at the headquarters of Facebook and Google, Apple and PayPal nearby.

Yet by the time they sat down, Jake had already gone cold. No one looking for start-up capital in Silicon Valley would dare take investment cash ‘from the two guys Zuckerberg hates more than anyone else in the world,’ he explained. ‘You should be glad this place will even serve you a hamburger.’ The Winklevoss twins knew then they needed something entirely separate from the giant corporations of the Valley, something utterly brilliant. It would be the start of their gamble with the shadowy new world of cryptocurrency – and their ascent to a new level of fame and fortune based on an invention so powerful it might even eclipse the billions of Zuckerberg.

Google was born in a garage. PayPal was first pitched in a Silicon Valley pancake restaurant. And the Bitcoin investment revolution started in an Ibiza nightclub at 3am in July 2012.

The muscular guy with the big idea was a man called David Avar. When the three of them met again at the Blue Marlin beach club – where a sun lounger costs £350 for one afternoon – he was sober. And, as the twins listened, it all started to make sense. With Facebook you could befriend anyone in the world. With Skype you could talk to anyone in the world. But try to move money around, and the banks would do it at a snail’s pace and take a cut for themselves.

Money was still controlled by institutions formed centuries before the internet. Bankers, governments, bureaucrats: all of them had a say in what you did with your money – your money, not theirs. 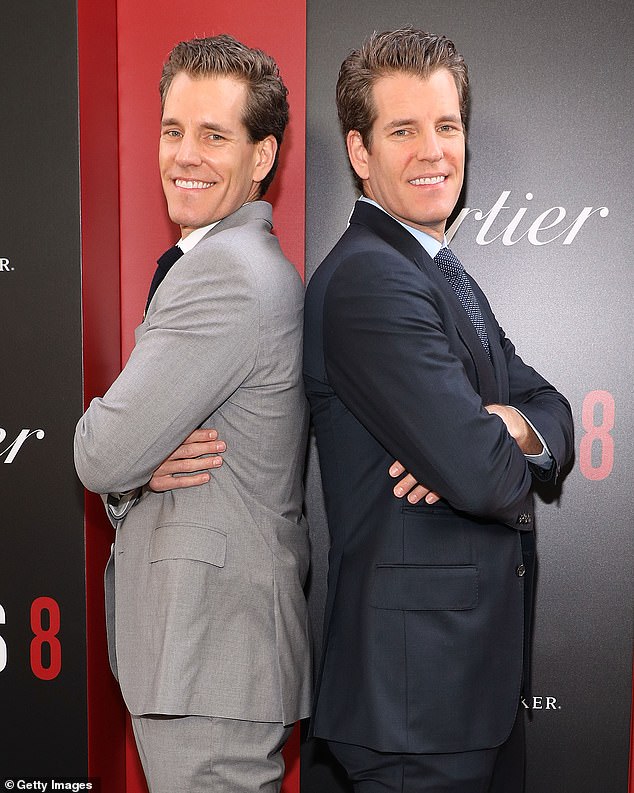 The brothers have a long way to go to match their enemy Zuckerberg, who is reckoned to be worth almost $69 billion

Avar explained that it was time for money to become cryptocurrency with no human authority in charge and no headquarters. This would be a currency of digital data and pure maths, money that moved at the speed of electricity. The implications were staggering.

Tyler and Cameron were cautious, replying that Bitcoin was just a gamble and that few get rich by gambling. ‘True,’ said Azar with a grin. ‘But you do get rich if you own the casino.’

Even today, the whole Bitcoin business looks like a mad gamble.But for the Winklevoss twins, widely read in economics, Bitcoin looked like something else entirely. First set up in 2009 by someone calling himself (or themselves) Satoshi Nakamoto, Bitcoin is a digital currency that allows people to send or receive money across the internet. No identities are revealed or required, only encrypted ‘addresses’. It is also ‘decentralised’, meaning, in a sense, that there are no human beings in charge. It is rather governed by the laws of mathematics, and processed via computers.

The Winklevosses did some research. Every establishment figure they talked to dismissed Bitcoin as a scam, a Ponzi scheme. But what about cash, they replied? No longer linked to gold, any government could print as much as it liked. Wasn’t that a Ponzi scheme? In contrast, the total number of Bitcoins had been fixed for ever at 21 million by its shadowy creator. It would never change.

Then the brothers started meeting stranger figures still, including a jittery, pot-smoking 22-year-old called Charlie Shrem. A tech genius, he still lived in his mother’s basement in New York, and believed in Bitcoin with a passion.

They encountered an obese recluse called Mark Karpeles, who ran the Bitcoin exchange itself – which implemented the transactions. They met passionate libertarians who saw Bitcoin as a way of taking back power from the state.

The cryptocurrency was also becoming a favourite of criminals, most notoriously on the so-called Dark Web. Cryptocurrency was the Wild West. But for Tyler and Cameron, the arguments were convincing. It was good maths. After all, no one eschewed cash just because criminals liked using it. The same went for Bitcoin.

Soon afterwards, they put $800,000 into the BitInstant company, an electronic platform for buying and selling the currency, and began to buy heavily into Bitcoins themselves. They started learning about cybersecurity. They worked on ‘cold’ computers that had been purchased new and never connected to the internet. The twins used these to set up accounts and store data. They bought a 16-sided dice to generate random numbers for passwords.

On one occasion, Cameron took a sledgehammer to a laptop to make sure they’d left no digital fingerprints. Soon, the Winklevosses would put $11 million into the virtual currency, which at that time bought them about one per cent of all the Bitcoins in existence. 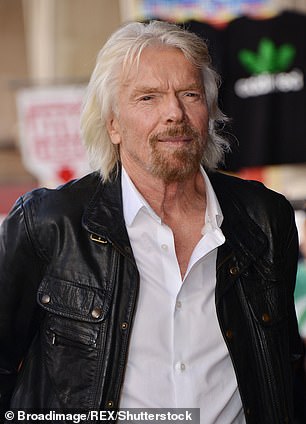 Around the world, Bitcoin was derided as a scam, yet the value kept going up. And then, in 2013, something happened to dramatically change the way the world saw cryptocurrency. When the EU bailed-out the tottering Cyprus economy, it did so on condition that the government order a huge levy on all bank holdings over €100,000 (£88,150). The EU called it a tax, but to others it seemed a staggering act of theft from private bank accounts – many held by Russians – and on a colossal scale. It was just as the libertarians of Bitcoin had warned: governments and banks could not be trusted.

Then in April 2013 The New York Times ran a headline that made the brothers’ hearts soar: ‘Never Mind Facebook: Winklevoss Twins Rule in Digital Money.’ It was a dream come true for the brothers – and they started living that dream to the full. Among America’s most eligible batchelors, they share an interest in tall, dark-haired beauties, with models Amanda Salvato, Natalia Beber and supermodel Irina Shayk appearing on their arms. They own separate luxury apartments in Manhattan, but routinely stay together at one or the other, and share ownership of an £18 million contemporary mansion in the Hollywood Hills.

The brothers have a long way to go to match their enemy Zuckerberg, who is reckoned to be worth almost $69 billion. Even so, their one per cent ownership of all Bitcoins is worth around £1,323,000,000, making them the world’s first known Bitcoin billionaires. They have also established a cryptocurrency exchange business called Gemini, itself valued at another billion or so.

Believing passionately in the future of cryptocurrency, Tyler and Cameron claim that Bitcoin is, in fact, ‘gold 2.0,’ another form of investment safe from economic downturns and crashes. Then, yesterday, came perhaps the strangest twist of all in this astonishing story – when it was revealed that the Winklevoss twins have been approached by a major figure from Silicon Valley to collaborate in launching a new cryptocurrency, a digital coin that will be tied to the value of the US dollar. The figure in question is Mark Zuckerberg. For more than a year, a secretive Facebook unit has been working on the project, aiming at a currency to be used across Facebook, WhatsApp, Instagram and beyond. Reportedly called GlobalCoin, it is due to be launched next year.

The first commercial transaction involving Bitcoin took place on May 22, 2010, when a computer programmer in Florida called Laszlo Hanyecz paid 10,000 Bitcoins for two pizzas because he liked to have a bit of spare pizza around to nibble on the next day.

Ten thousand Bitcoins were worth about $30 then, so $15 per pizza, with home delivery, was about right.

A young student took him up on the offer, and the pizzas were duly delivered. If Hanyecz had kept a hold on those Bitcoins, today they would be worth around £62,800,000.

Even Zuckerberg, the eighth-richest man in the world, has taken notice. But this time, it’s advantage Winklevoss.