The Hut Group has insisted it knows of ‘no reason’ for the substantial share price decline it was struck by yesterday, with the online retailer assuring investors of its ‘very strong liquidity’ position.

As the stock’s slide persisted today with another fall of 3 per cent, shareholders were nursing a 60 per cent loss a nrecent peak of 684p in early September.

Hut Group shares plummeted by 35 per cent on Tuesday after a shareholder meeting, wiping £2billion off the firm’s market cap.

The meeting, which had been intended to reassure investors following a wave of negative commentary and to explain the value of the group’s online retail platform, had the opposite effect.

The share price nosedive began when chief executive Matt Moulding began speaking. Moulding told the Mail yesterday it had ‘not been a great day’ for himself of THG.

The CEO of the Manchester-based clothes, make-up and protein drink seller added that he did not know ‘the full answers’ as to why the share price had taken such a hit, and he intended to discuss with brokers later that day.

Moulding suggested the company had been targeted by ‘short-sellers’ betting against the shares.

He also highlighted an ‘attack on the business ten days ago’ by research firm The Analyst that expressed doubts over Ingenuity as well as THG’s culture and corporate governance. 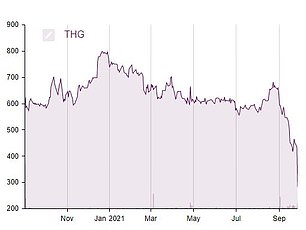 THG followed up on Moulding’s comments on Wednesday morning by telling investors ‘it knows of no notifiable reason for the material share price movement’.

Stressing the strength of its performance since its September 2020 IPO, THG said it has ‘a very strong liquidity position as it enters its peak trading season’.

The firm is due to report its Q3 trading update on 26 October.

The Hut Group: Rise and Fall

The Hut Group was the darling of the stock market when it listed in September last year.

It was the biggest debut in London since the Royal Mail in 2013 and rose 25 per cent from its 500p offer price in its first day.

But shares started sliding five weeks ago amid rumours boss Matt Moulding wanted to split up the group.

It was confirmed on September 16 when he outlined plans to list THG Beauty as a separate company and suggested THG Nutrition could follow suit.

The shares took another lurch downwards when a research note published on October 1 by The Analyst told investors to short – or bet against – the stock.

Predicting the price could fall to 260p, the note claimed THG’s tech arm Ingenuity, which it said accounts for half the company’s value, may not meet expectations.

It left Moulding with a fight on his hands with all eyes on yesterday’s ‘capital markets day’, when investors have the chance to discuss a company with its top management.

But it ended with The Hut Group having its worst ever day on the stock market, and more questions hanging over the company.