Liverpool stepped up their preparations for start of the new Premier League season next week by playing two 60-minute friendlies against Italian side Bologna in France.

Under the sunshine of the city of Evian, Reds boss Jurgen Klopp named two separate line-ups for the pre-season tests, including a near-full strength squad for the first game.

The opening hour-long match saw Liverpool race into a two-goal lead early on thanks to a couple of gifts from Bologna defenders. 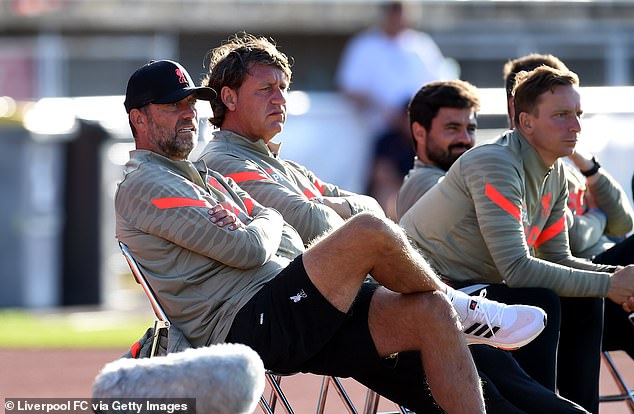 Italian defender Kevin Bonifazi played a villainous role in the Reds opener by giving the ball straight to Diogo Jota, who simply ran towards goal and put it past the Bologna goalkeeper.

A few minutes later, Mattias Svanberg played a loose ball across his own goal which allowed Sadio Mane to round the goalkeeper and tap home.

In an opening game which the Reds controlled from start to finish, Mo Salah thwacked the crossbar as the Reds threatened to extend their lead in the second half.

Divock Origi had the chance to extend the lead with a penalty after Gary Medel hacked down Ben Woodburn but the Belgian struck the post with his spot kick. 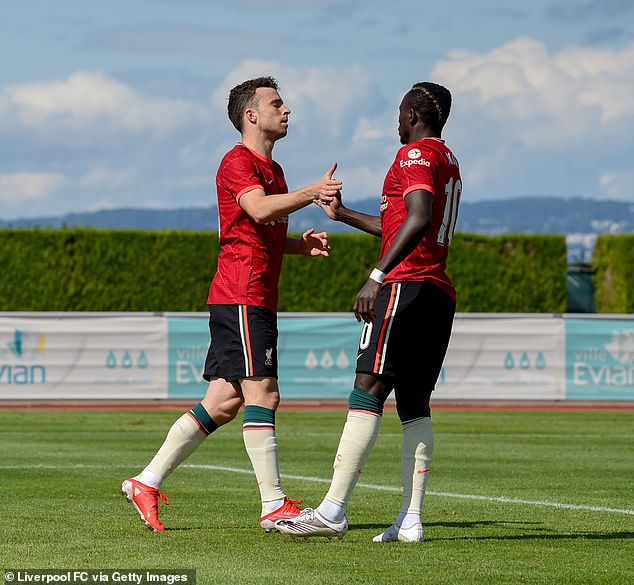 Diogo Jota and Sadio Mane got on the scoresheet in the first game based in Evian, France

The big team news for the first line-up of the afternoon was a first start for Virgil van Dijk since he ruptured his knee ligaments in the Merseyside Derby last October.

Unlike against Hertha Berlin in their last friendly, when he was turned inside outside for one of the four goals Liverpool conceded, the Dutchman was relatively untroubled against a poor Bologna XI – but did show signs in the France friendly that he is getting back up to speed. 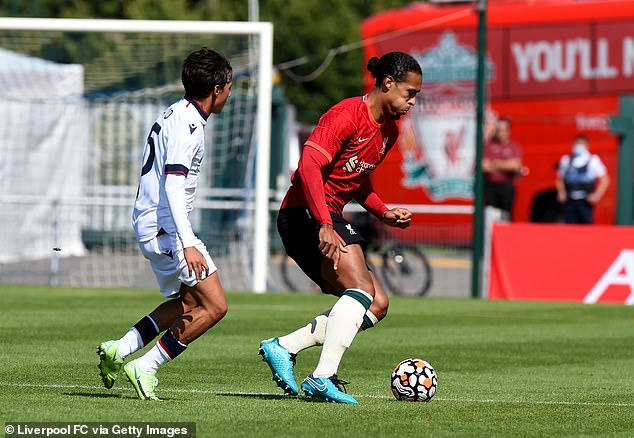 In the first-half, he quelled a promising Bologna attack by casually shrugging Emanuele Vignato out the way, showing that he has his physicality back after such a long period off.

The centre-back also read the game well to stop another attack by cutting out Federico Santander’s low cross into the six-yard box.

He may have only got a 43-minute run-out, but with ten days to go until the start of the Reds’ season, Van Dijk doing his usual business can only be a promising sight for Liverpool fans. 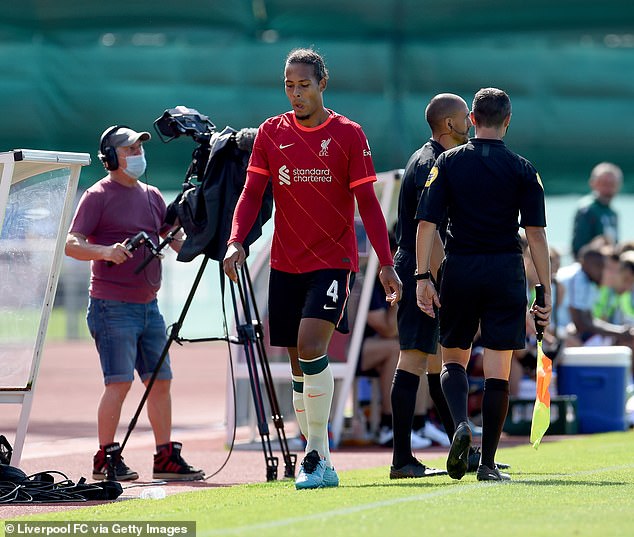 GAME ONE: ROBERTSON LEADS THE PRESS FROM DEEP

Liverpool’s two goals in the first game may have been gifts from their opponents, but it does go to show how effectively the Reds press against opposition who may not be comfortable with playing out from the back.

And while the Reds’ front three should be praised for the way they went all-out at  Bologna in their own third, the person driving their press was an individual further back in Andy Robertson.

The Scottish left-back was shouting instructions towards his attackers when the Reds were out of possession but also took it upon himself to get at Bologna’s attackers every time the ball went down the right-hand side. 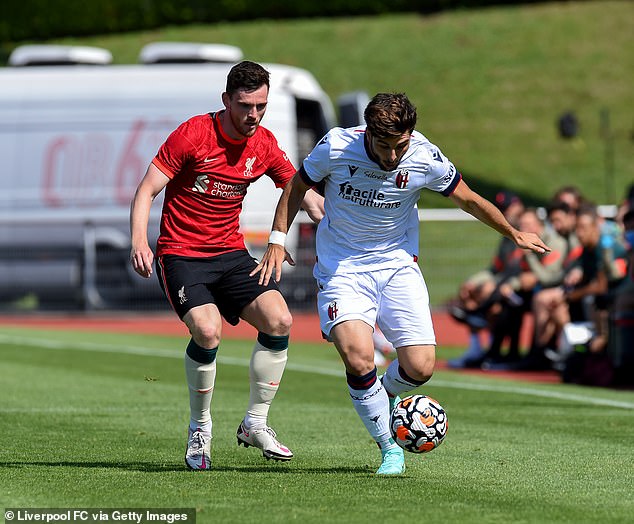 One of those intense presses nearly led to a third Liverpool goal as he won the ball high up the pitch superbly, before crossing to Harvey Elliott whose touch was a bit off on the back post.

Robertson may not have had the best of seasons last year – he only recorded seven assists which is significantly lower than his lofty standards in recent years – but he has reminded fans that there is more to good play than goals and assists.

GAME ONE: HARVEY ELLIOTT SET FOR MAJOR ROLE THIS SEASON?

In what looked pretty close to a full-strength opening line-up from Liverpool boss Klopp, Harvey Elliott was given more opportunities to show he can mix it with the likes of Trent Alexander-Arnold down and Mo Salah.

The 18-year-old was handed his third start of pre-season – to go with his appearances from the off against Mainz and Hertha Berlin this summer – and the teenager could be an unlikely option in Liverpool’s search for Gini Wijnaldum’s replacement. 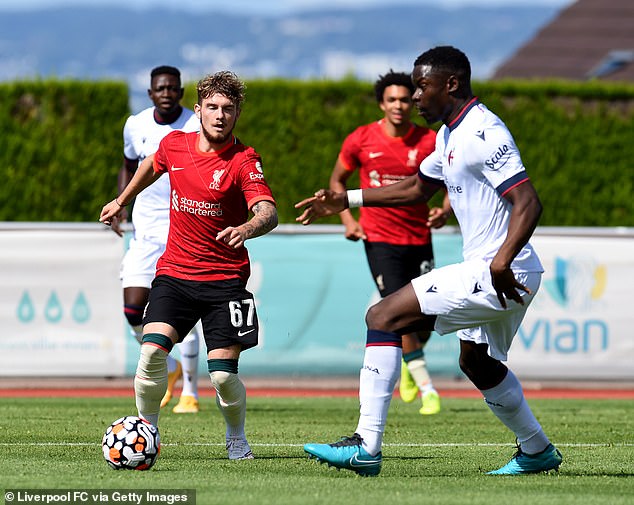 Elliott has done little to affect matters in the final third so far this pre-season but does not exactly look out of place in this Reds side – especially considering he is playing out of position from his usual wide role.

Do not be surprised if the teenager, who scored seven goals and registered 11 assists for Blackburn last season, ends up playing a key role in Liverpool’s Premier League opener at Norwich next week.

The Japan star has been excellent in pre-season so far with a goal against Hertha Berlin and he added another to his tally.

It is almost impossible to see where he would slot into the Liverpool first team but he is doing everything he can to force Klopp to consider him.

The attacking midfielder timed his run perfectly to latch onto Xherdan Shaqiri’s through ball and bury a finish that was far more difficult than he made it look.

Minamino showed his classy with a run of games on loan at Southampton last term and will no doubt be a useful option for Liverpool this season. 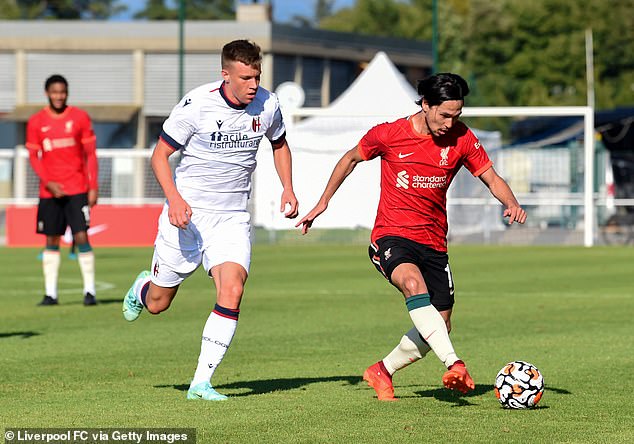 In Evian, he was constantly offering himself to the man in possession and has the technical ability to twist himself out of trouble, but that killer instinct in front of goal might be the element that sets him apart.

An injury to Firmino could open the door and while Oxlade-Chamberlain is being considered as a false nine, the 26-year-old might also throw his hat in the ring.

Klopp values versatility and Minamino will be able to fill in in a number of positions.

TSIMIKAS WILL PUT PRESSURE ON ROBERTSON

The Scottish captain has been among the shining lights of this Liverpool side and his place in the first team is assured.

But it will not hurt to feel the Greek defender breathing down his neck.

Tsimikas’ first campaign was plagued by injuries but he will at least be able to help lighten Robertson’s load this term.

He has enjoyed an excellent pre-season so far and was again assured in defence and attack. 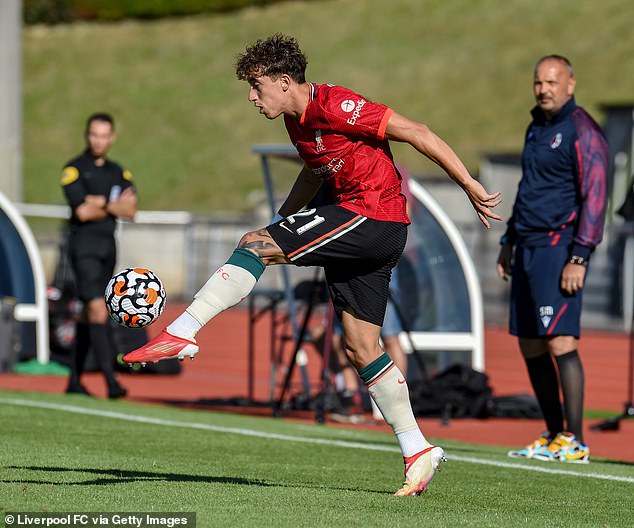 The 25-year-old whipped in a number of tantalising crosses, one of which Roberto Firmino should have scored from, and makes good decisions in the final third.

There were questions marks over his positioning in the few chances he had last season but he looked solid against Bologna, even though it must be said he had little to do at the back.

The injuries at the back last season showed how damaging a lack of depth can be but the Reds can rest easy that if Robertson goes down, Tsimikas is capable of filling in without a gigantic drop in quality. 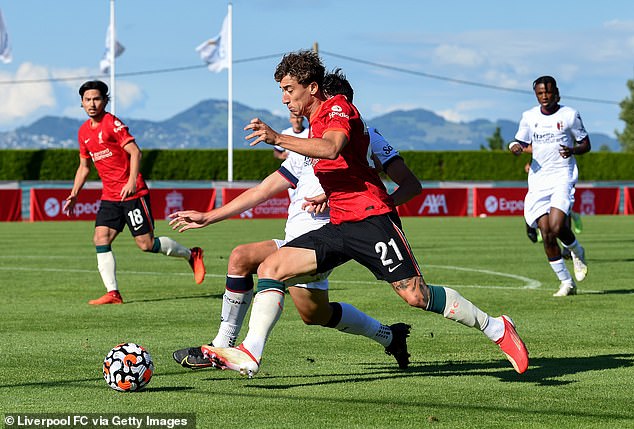