Think Bali is safe? Indonesia records 1,000 new coronavirus infections in a single DAY – as the country has the highest death rate in south-east Asia

Indonesia has broken its own record for the most confirmed COVID-19 infections in a single day with almost 1000 new cases.

Indonesia’s last largest single day spike was 693, set the day prior, according to data from Johns Hopkins University.

With Thursday’s jump in infections the country’s total number of confirmed cases climbed to 20,162 and the death toll spiked by 36 people to 1,278.

Indonesia now has the highest death rate of any country in south-east Asia.

‘(It) means people are still ignoring the health protocols, that people are infecting those who are vulnerable,’ he said.

‘We need discipline practicing the health protocols. This is the time we play our part in handling COVID-19.’

The Indonesian government have been relaxing restrictions on essential flights to allow people to fly home during the Ramadan religious period.

Experts such as Panji Fortuna Hadisoemarto, an epidemiologist from Padjadjaran University, worry travel for the Eid holiday could lead to new infections.

‘It is very possible that people will try and go anyway. If they do, I fear that they may become sources of transmission in their hometowns,’ said.

Neighbouring Malaysia currently has 7,059 confirmed cases of coronavirus and a total of 114 deaths. 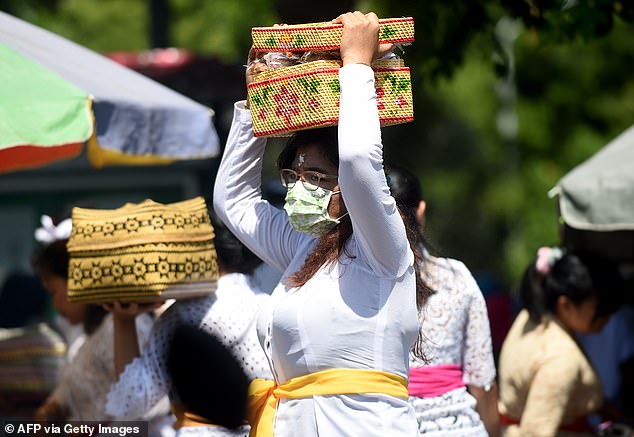 With the highest number of deaths in south-east Asia, 1,278, Indonesia has eased restrictions on flights to allow for travel home for the Ramadan religious period (Balinese woman is pictured in Denpasar)