Left-wing research organisation Autonomy say a state-funded four-day week scheme, in which the government covers the cost of the lost fifth day, would encourage Britons to get out and spend.

The idea, which has been backed by unions and a Labour MP and criticised by one right-wing think tank, could cost the government up to £22 billion in the first year.

But Autonomy say such a ‘bold’ move could help stimulate the UK economy, which has taken a huge hit in the midst of the coronavirus pandemic and subsequent lockdown rules.

Will Stronge, Director of Research at Autonomy, said: ‘As the furlough scheme comes to an end and firms across the economy continue to suffer, bold economic strategies are required to support the economy now and forge a recovery process that prioritises secure and decent work.

Left-wing research organisation Autonomy say a state-funded four-day week, where staff are paid for five days of work, would encourage Britons to get out and spend. Pictured: Construction workers building in London 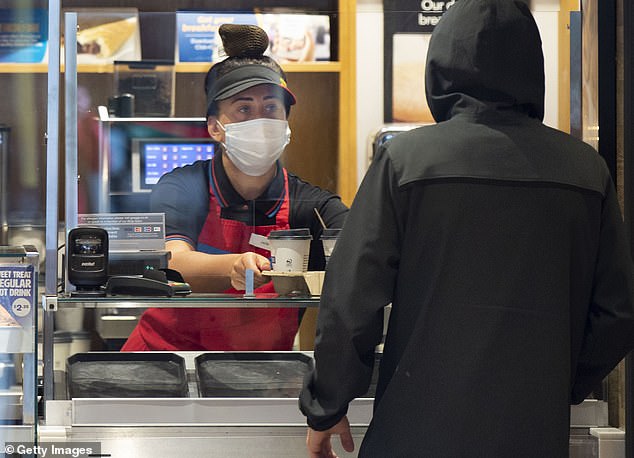 The idea, which has been backed by unions and a Labour MP, could cost the government up to £22 billion in the first year if it includes the retail, food and hospitality industries. Pictured a Greggs’ employee serves a customer in Cardiff

‘Shorter working time has been used throughout history as a way of responding to economic crises as it enables work to be shared more equally across the economy.

‘Instead of propping up an already failing economy, the government could act to save jobs and create more desirable working patterns for the future.’

Named the Short Working Time Subsidy Scheme, the idea is that firms could cut staff hours to 80 per cent, which would result in a five day week coming down to four days, but keep them on 100 per cent.

Autonomy say under their proposals, the government would fund the 20 per cent difference. 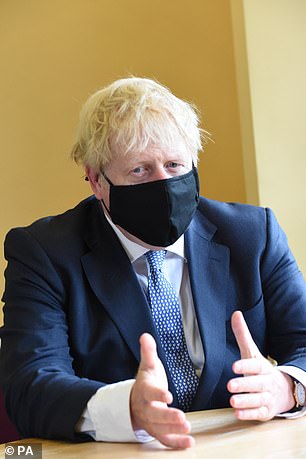 If the scheme was only applied to the arts and entertainment sector, Autonomy say it would cost £3.8billion in the first year, while adding the retail, food and hospitality industries would increase it to £22billion.

But they believe such a scheme would allow people to go out and spend their money – providing a much needed boost to businesses impacted by three months of coronavirus lockdown.

The scheme would involve a five-year taper which would reduce the state spending on the scheme year-on-year as well as allow for a ‘gradual transition to a “new normal” of shorter working weeks’, the report says.

Autonomy say such a policy was used in Britain, under the name of the Temporary Short Time Working Compensation Scheme (TSTWCS), in the late 1970s.

The think-tank also pointed to the German Kurzarbeit scheme, recognised as the ‘gold standard’ by the IMF, and jokingly referred to as ‘Germany’s most successful export’ by one economist.

Commenting on the report, Clive Lewis, Labour MP for Norwich South, who stood as a candidate in the 2020 Labour leadership contest said: ‘A Shorter Working Time Subsidy Scheme is a fantastic idea as it would retain jobs and create more desirable working hours in our labour market.

‘Post COVID-19, the four day week is gaining in popularity across the world and I sincerely hope the Treasury will agree to explore these proposals when I meet with them next week.’ 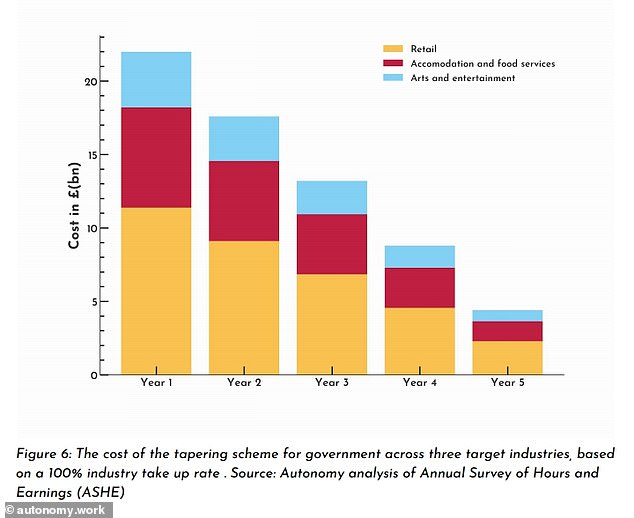 The scheme would involve a five-year taper (pictured: a graph showing the taper) which would reduce the state spending on the scheme year-on-year as well as allow for a ‘gradual transition to a “new normal” of shorter working weeks’, the report says 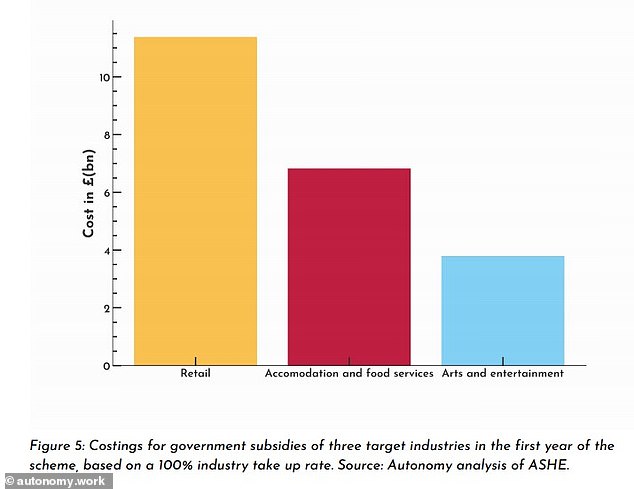 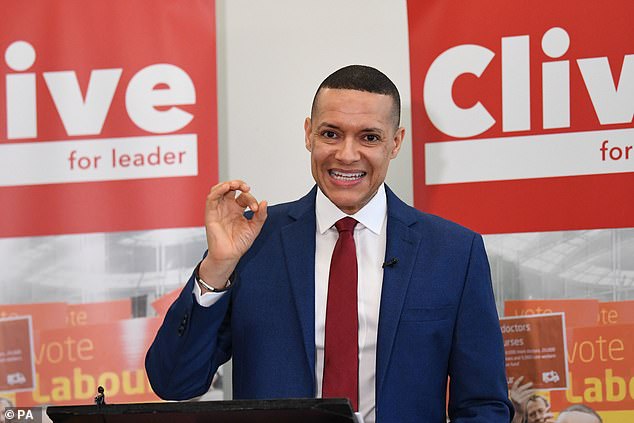 Commenting on the report, Clive Lewis (pictured), Labour MP for Norwich South, who stood as a candidate in the 2020 Labour leadership contest said it was a ‘fantastic idea’

Meanwhile union chiefs at Unite have called on the Labour party as a whole to back the plans.

‘It is only by reversing out the intended changes to the Job Retention Scheme and extending it into 2021 that we can avoid mass job losses.

‘The scheme should now be adapted to support shorter working weeks and job sharing.

‘Such steps are essential to ensure workers do not pay for this crisis with their jobs and austerity.’

However the plans have been criticised by s a neoliberal think tank The Adam Smith Institute, who say the economy needs people to get back to work after months of being on furlough.

Matt Kilcoyne of the institute said: ‘What we need right now if for people to be working.

‘During the pandemic it is understandable to have a furlough scheme because the government doesn’t want people to catch the virus, but if they arguing that the government should be propping up unprofitable businesses now then that is exactly not what we should be doing.

‘This is not a vision many people should be enthused by in my opinion.’