A third grade teacher has stunned the internet after she unveiled her ‘magical’ Harry Potter-themed classroom ahead of the beginning of the school year.

‘I am COMPLETELY DRAINED but it was worth it,’ Tressa wrote online after revealing pictures of her classroom. ‘I honestly lost track of how many hours it took me but in the end, I spend more time here than at home some days and it is now my happy place.’ 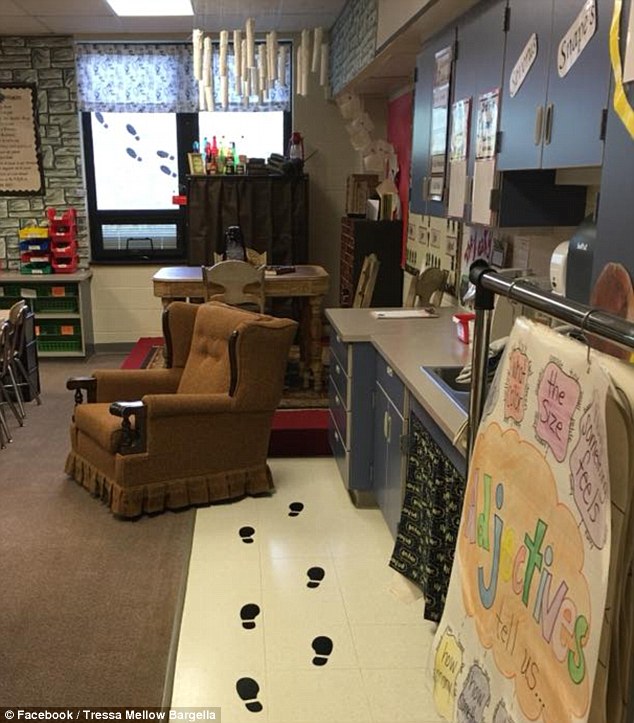 Inviting: When students first walk in, they are welcomed with Harry Potter decor include Maurader’s Map footprints 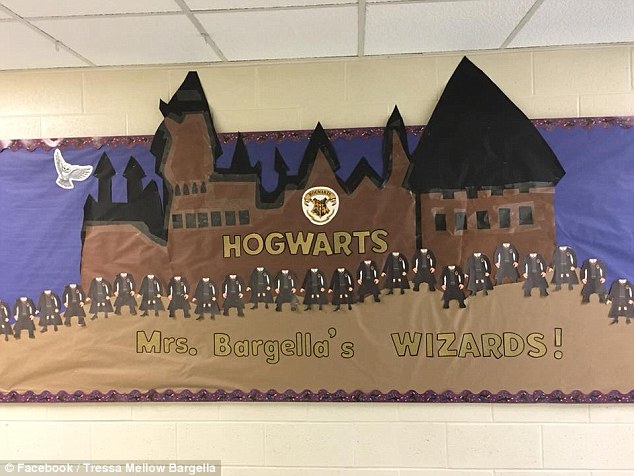 Clever: Featured in the classroom is an image of Hogwarts where each student can place a picture of themselves on a wizard’s body 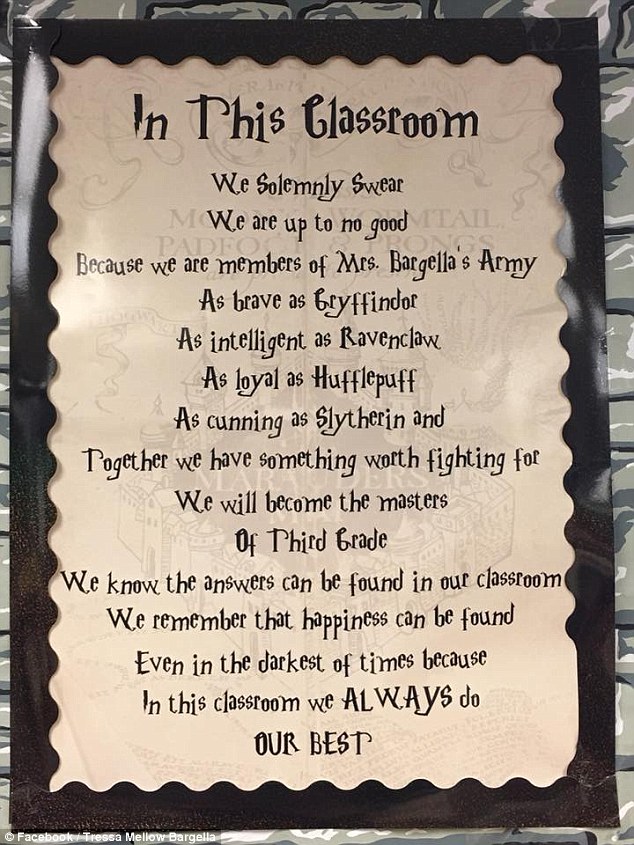 Important: Sticking with the theme, Tressa unveiled a mission for the classroom that mirrored popular language from the famous books

She added:  ‘Hope my new little wizards love being inside my Hogwarts walls as much as I do! Here’s to a magical new year!!!’ 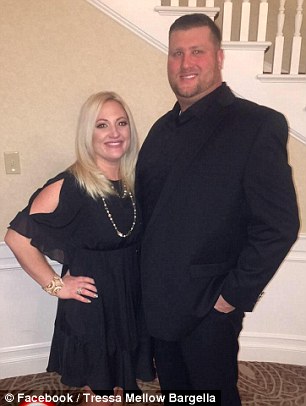 Genius: Tressa, pictured with her husband, will be teaching a group of third graders this year

The excited teacher pulled out all the stops for her students to welcome them into their new classroom.

At the entrance of the room, Tressa wallpapered the wall with a brick design to represent Platform 9 3/4. She even included a trolley halfway out of the wall with luggage.

What sets Tressa’s classroom a part from others is her commitment to tying in different themes from Harry Potter and Hogwarts into her every day activities with the students.

There are four sets of desk clusters to make up the Hogwarts houses: Gryffindor, Slytherin, Hufflepuff and Ravenclaw.

Tressa then included glass jars on the side of the classroom with beads so each ‘Hogwarts house’ can collect rewards for good behavior and answering questions correctly. 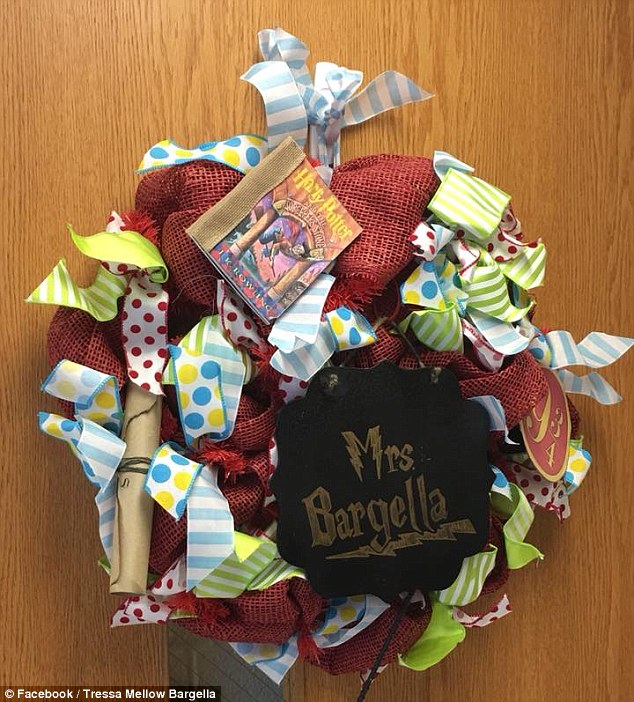 True to theme: Almost every aspect of Tressa’s classroom features something that connects to Harry Potter 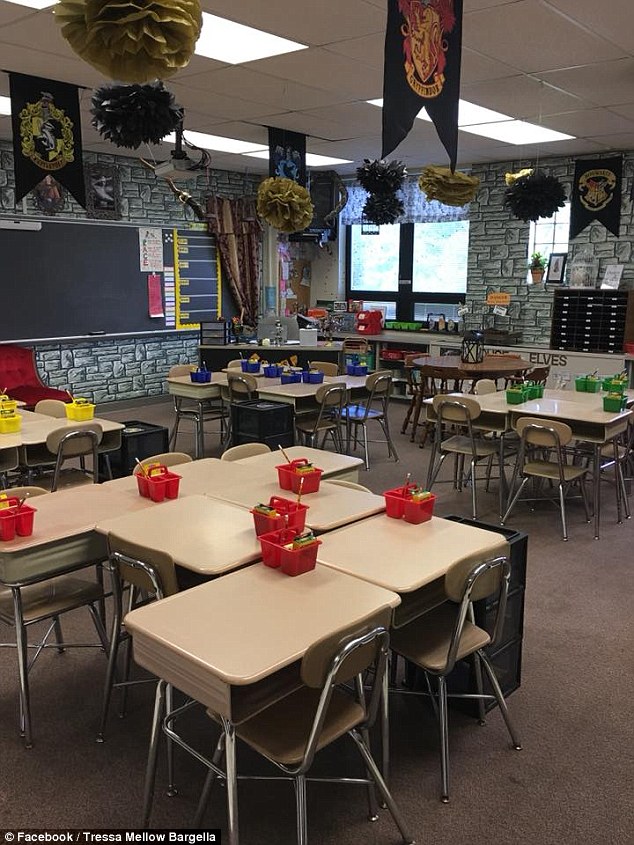 Incredible: The desks are arranged into four clusters to make up the Hogwarts houses 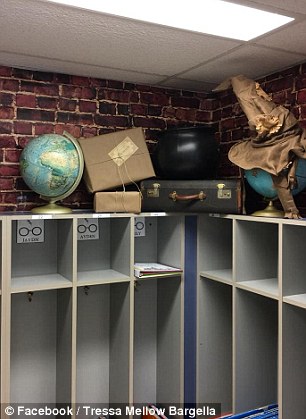 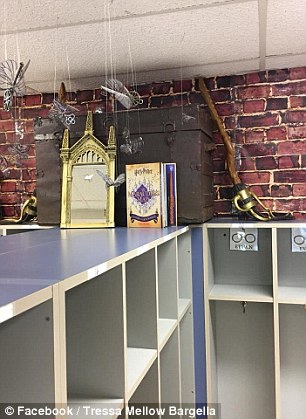 Creative: One one side of the room is a cubby area for each students backpack

Inspired: Tressa made sure to include important quotes from the book series all around the magical classroom 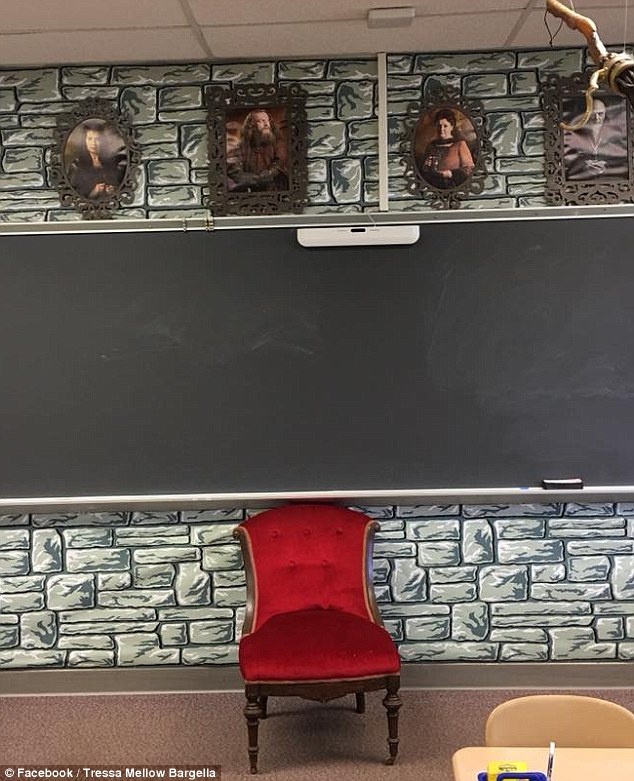 Brilliant: At the head of the classroom is the ‘headmaster’s’ chair for Tressa to sit in

In one corner of the room, there are cubbies for each young ‘wizard’ to place their book bags and belongs before making their way to their desks. But the cubbies keep true to theme with a broomstick, owl cage and luggage strewn across the top.

At the front of the classroom is a single red chair for the headmaster, in this case Tressa, to sit when she is teaching her students.

Scattered throughout the classroom is a series of inspirational quotes from prominent characters in the famed book series.

‘Working hard is important. But there is something that matters more, believing in yourself,’ the wall above the classroom sink reads, which was originally said by Harry Potter in the series.

Another famous quote from Albus Dumbledore was placed above the cubby area. It reads: ‘It is our choices that show who we truly are, far more than our abilities.’ 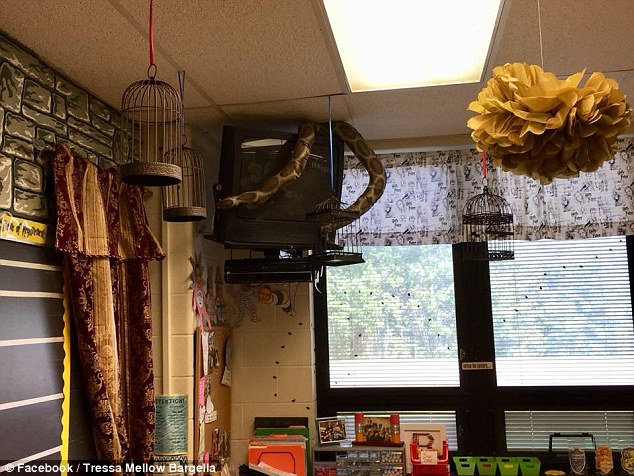 Snake sighting! Tressa even added a fake snake, to represent Nagini, in the corner of the classroom 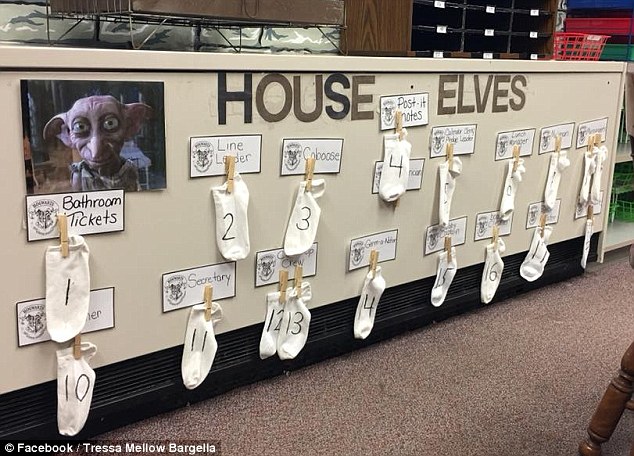 Amazing: For classroom chores, Tressa created a ‘House Elves’ area where each student grabs the assigned sock for the task 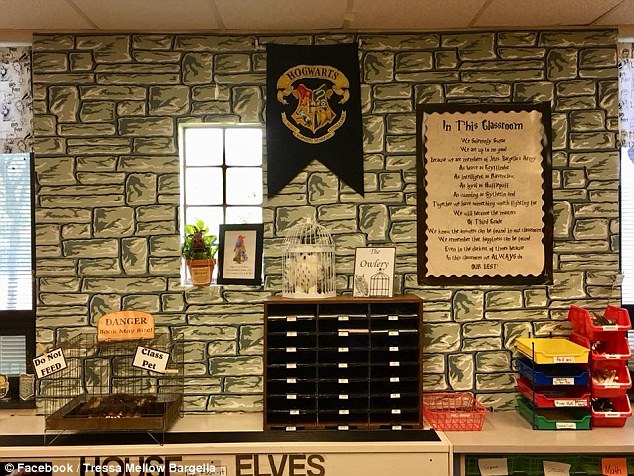 Hardwork: The teacher admitted it took her hours to decorate the entire classroom 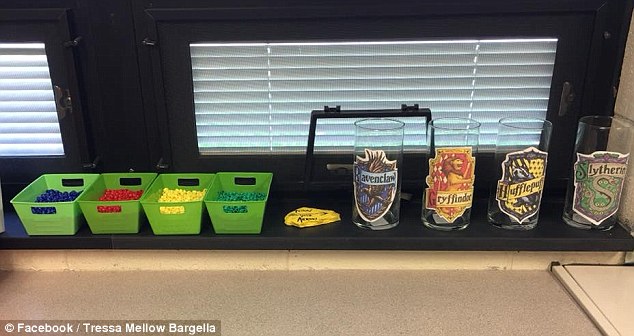 Rewarding: Each ‘Hogwarts house’ will receive beads as rewards for good behavior and answering questions correctly

The Harry Potter themes only continue as Tressa labeled the area where she assigns classroom tasks — such as being line leader, caboose and secretary — as ‘house elves’.

Each student will grab the assigned sock when they have a task.

Included in the classroom as a fun (but important) way to keep the students focused is a chart where Tressa can move any child clothespin depending on how they are behaving.

The students start the day on the ‘Accepted to Hogwarts’ section. But if they are displaying exceptional behavior, the student can move up to ‘Bonus House Points’ or ‘Prefect’ status.

But if a student is behaving poorly, they can go down to the ‘Forbidden Forest’ which entails a warning. Then they can move down to ‘Chamber of Secrets’ for the teacher’s choice and the ‘Howler’ section with a note home to the parents.

The final section is entitled ‘Azkaban’ where the student will get sent to the principal’s office.

‘Not that any of my little angels will need it,’ Tressa wrote in a caption about that section of her classroom. 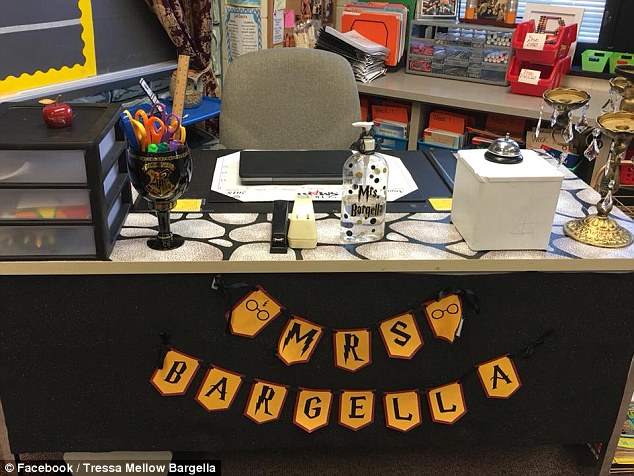 Fun: Based on the pictures, it looks like Tressa had a lot of fun decorating her new classroom 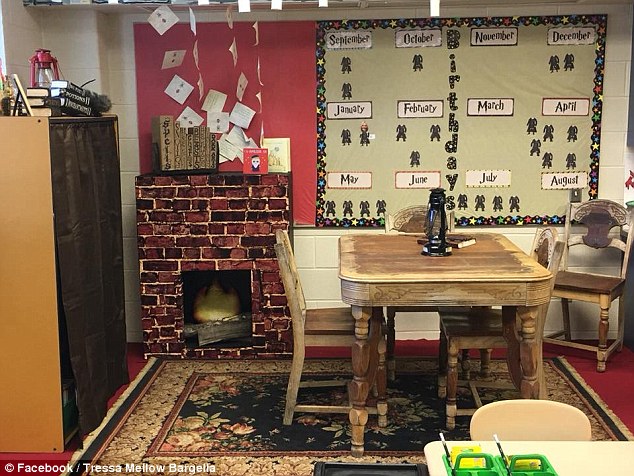 Welcoming: She even created a fireplace area with a table that looks like it was pulled from the set of one of the Harry Potter films 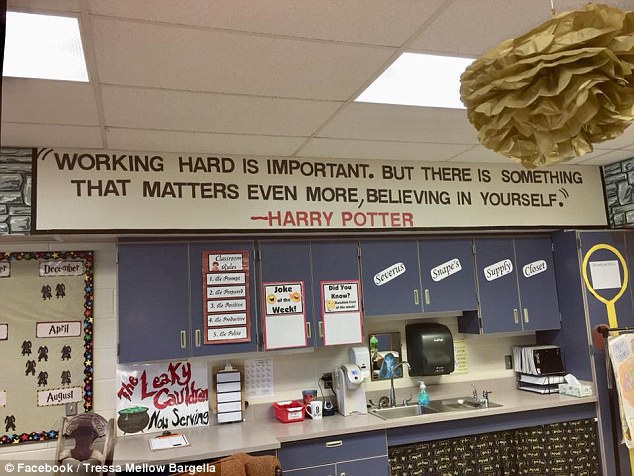 Encouraging: Above the sink is a quote that was said by Harry Potter in one of the books 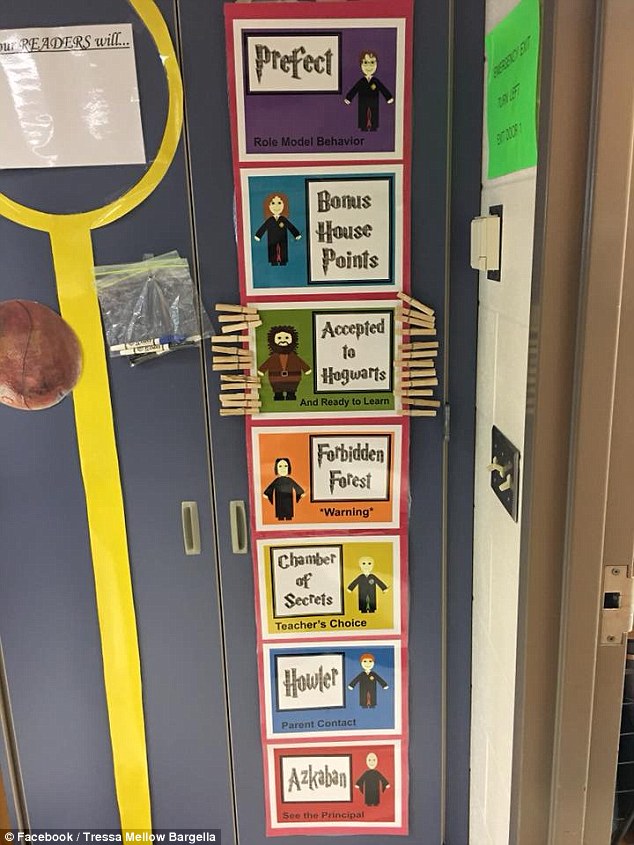 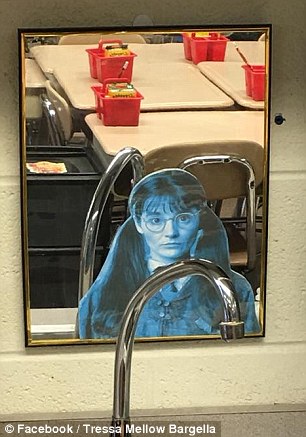 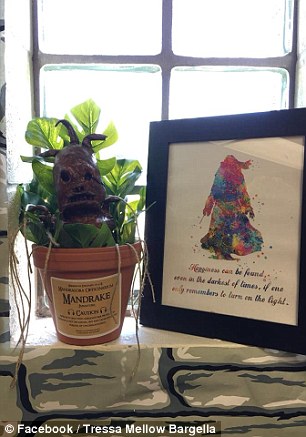 All in the details: The classroom even includes a picture of Moaning Myrtle (left) in the mirror and a Mandrake plant (right) 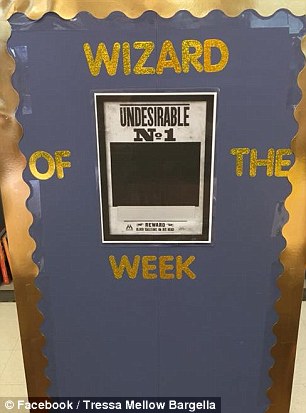 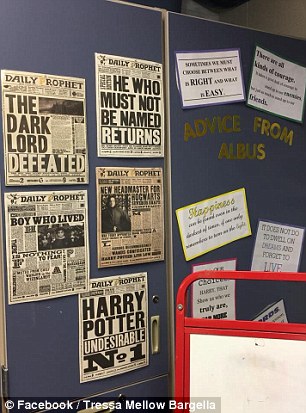 Ingenious: Other aspects of the classroom include a ‘Wizard of the Week’ section (left) and an area with Daily Prophet front pages (right) 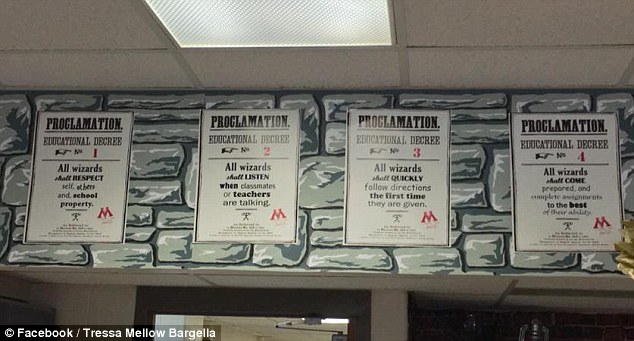 Tressa also makes sure to reward good behavior of her students by having a ‘Wizard of the Week’.

The student who earns the title gets to place their picture in the middle of a Daily Prophet front page for the entire week.

Since Tressa unveiled her magical classroom on Thursday, the pictures have been shared more than 110,000 times with adults expressing how they want to go back to school.

‘Omg you are beyond extra! I can’t even describe how amazing this is!! I’m going to take an anti-aging potion and sign up for your class,’ one person wrote online after seeing the amazing pictures.

Another person commented: ‘I don’t even have kids and I wish I could go back to 3rd grade! This is amazing for kids imaginations and to still have fun while learning!’

If any of Tressa’s students aren’t fans of Harry Potter before they enter the classroom, they probably will by the end of the year because of how much fun the theme makes for learning.