Third major storm slams parts of the northeast US

The third major storm in two weeks has started to slam parts of the already storm-battered north-east with 1,500 flights cancelled and blizzard conditions expected in some areas of the US.

The National Weather Service issued a blizzard warning on Tuesday for much of the Massachusetts coast, a winter storm warning for most of New England and a winter weather advisory for portions of New York, Pennsylvania and New Jersey.

The storm is expected to last through most of the day Tuesday as it causes major disruptions to road and air travel.

The third major storm in two weeks started to slam parts of the storm-battered north-east on Tuesday with 1,500 flights cancelled and blizzard conditions expected in some areas of the US

The flight-tracking site FlightAware already is reporting more than 1,500 canceled flights within, into or out of the US on Tuesday with more than half of the affected flights at Boston. Amtrak suspended service from Boston to New York’s Penn Station until 11am.

While the first two storms of the month brought coastal flooding and hundreds of thousands of power outages, this one is expected to be different.

‘This one’s main impact is going to be snow,’ said Kim Buttrick, a meteorologist with the National Weather Service office in Taunton, Massachusetts.

More power outages are possible, but they are not expected to be as widespread as last week. Only minor coastal flooding is predicted.

The blizzard warning means sustained winds of greater than 35 mph (56 kph), along with visibility of less than a quarter mile for prolonged periods, according to the weather service. Wind gusts as high as 65 mph (104 kph) are forecast in coastal areas. 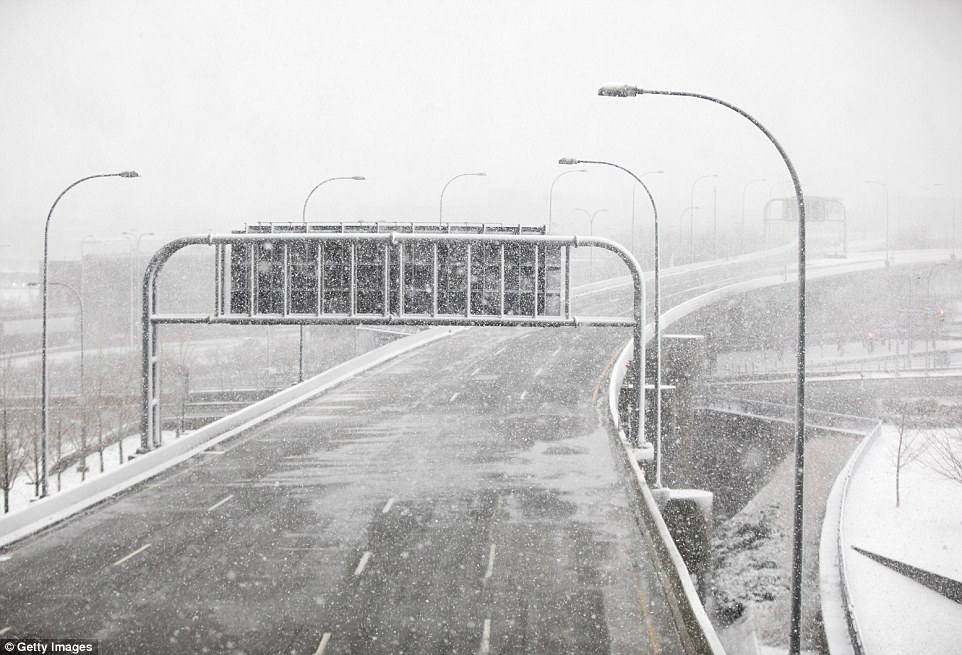 The storm is expected to last through most of the day Tuesday as the National Weather Service issued a blizzard warning for much of the Massachusetts coast. Boston is pictured above 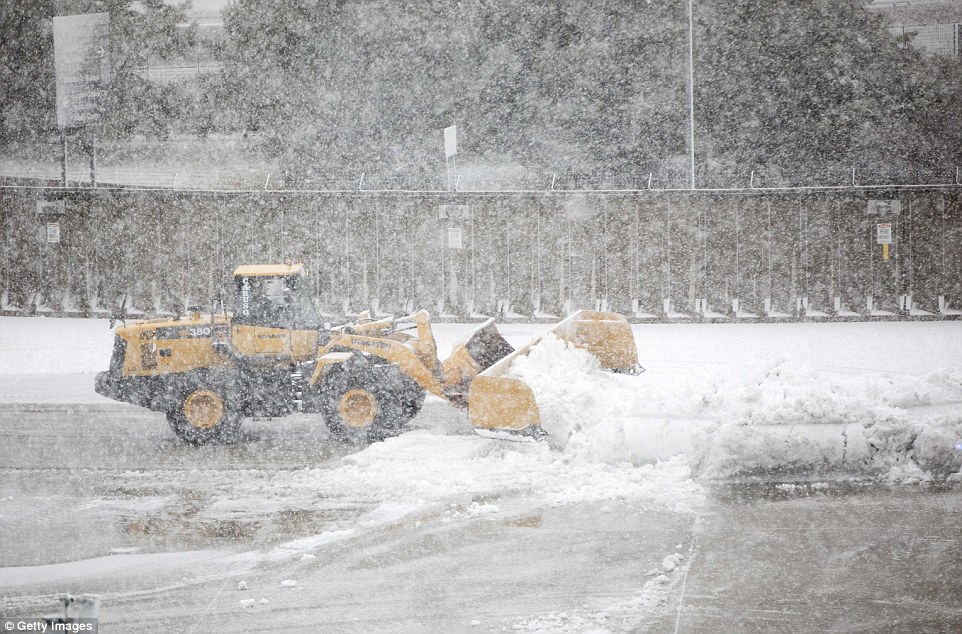 A snow plow clears snow on a taxiway at Logan International Airport in Boston on Tuesday morning after flight-tracking site FlightAware reported 1,500 flights had been cancelled In New York, heavy, wet snow is forecast for Long Island (pictured above on Tuesday), which could get 5 to 10 inches of accumulation 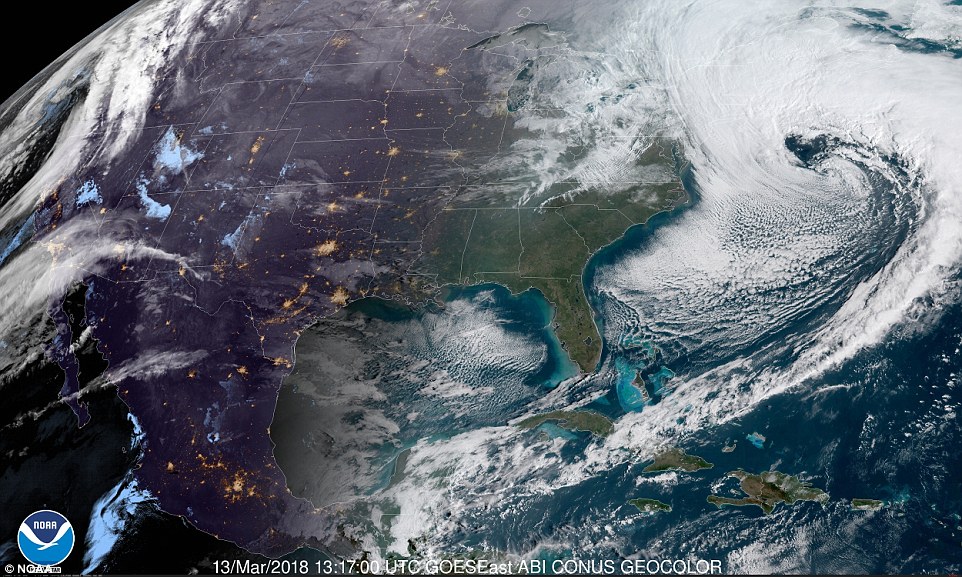 Boston and eastern Massachusetts, as well as Rhode Island, could get a foot and a half of snow, with less to the west of the city. Schools across the region announced they would be closed on Tuesday including in Boston and Providence.

Maine also is bracing for a hard hit. The Portland International Jetport has had 75.5 inches of snow, far above the normal for the date of 51.8 inches with another 12 to 18 inches is on the way.

As much as 14 inches of snow is forecast in New Hampshire and more than a foot of snow is expected in parts of Connecticut.

In New York, heavy, wet snow is forecast for Long Island, which could get 5 to 10 inches of accumulation, while 2 to 4 inches are possible in New York City.

In New Jersey, the storm is expected to start out as light rain before changing over to all snow by early Tuesday, leaving behind up to 4 inches. 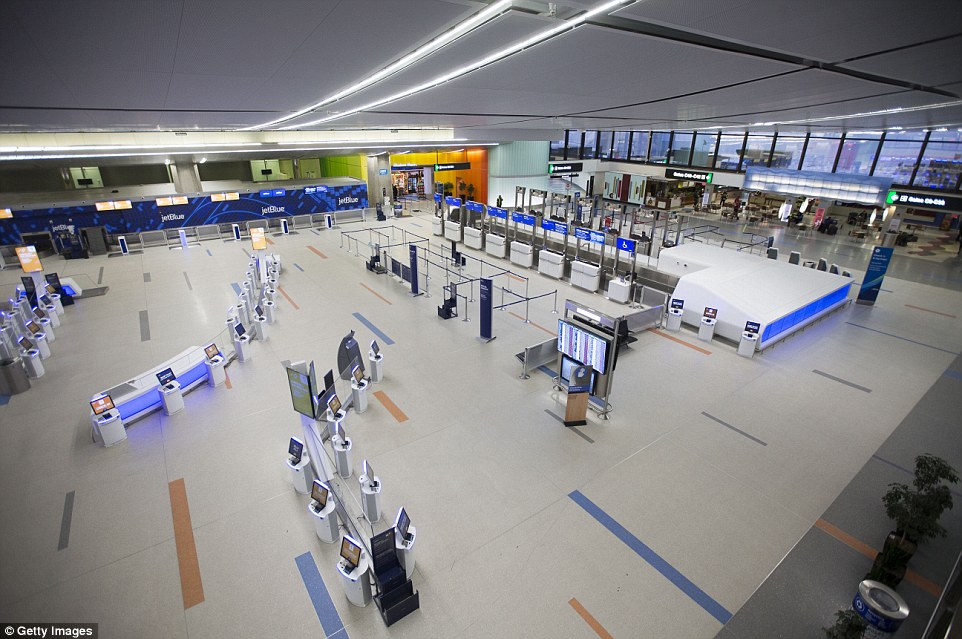 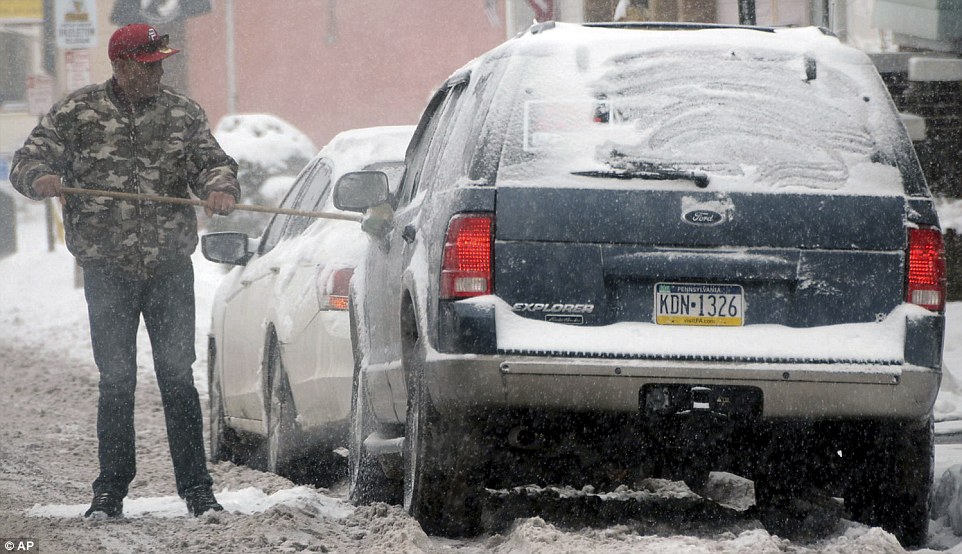 A man cleans the snow off a vehicle as another winter storm continues to dump more snow throughout the area in Hazleton, Pennsylvania on Tuesday 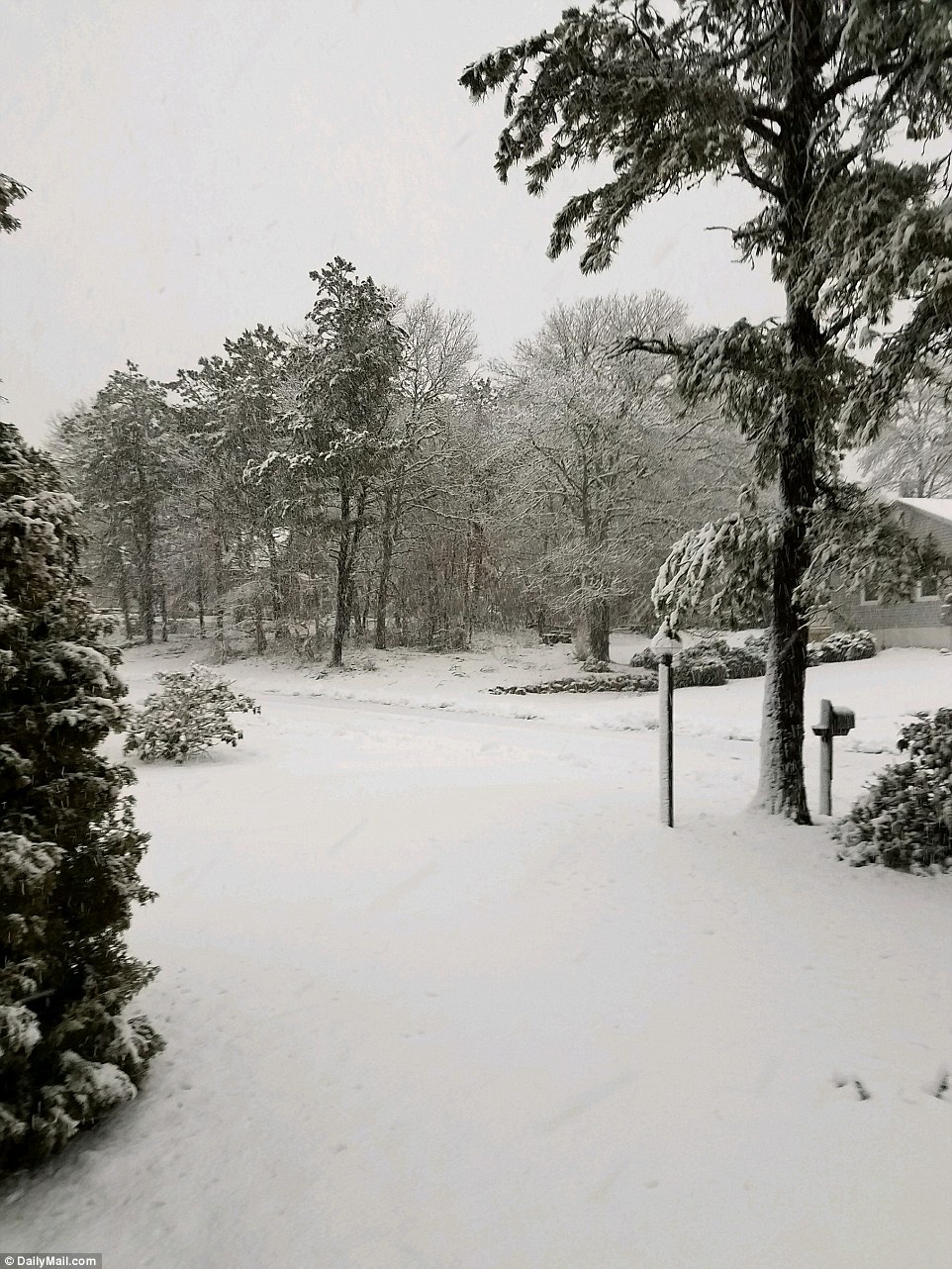 While snowfall was negligible on much of Cape Cod (above) during the early hours of the latest storm to hit the Northeast, forecasters said the nor’easter could dump as much as 2 feet 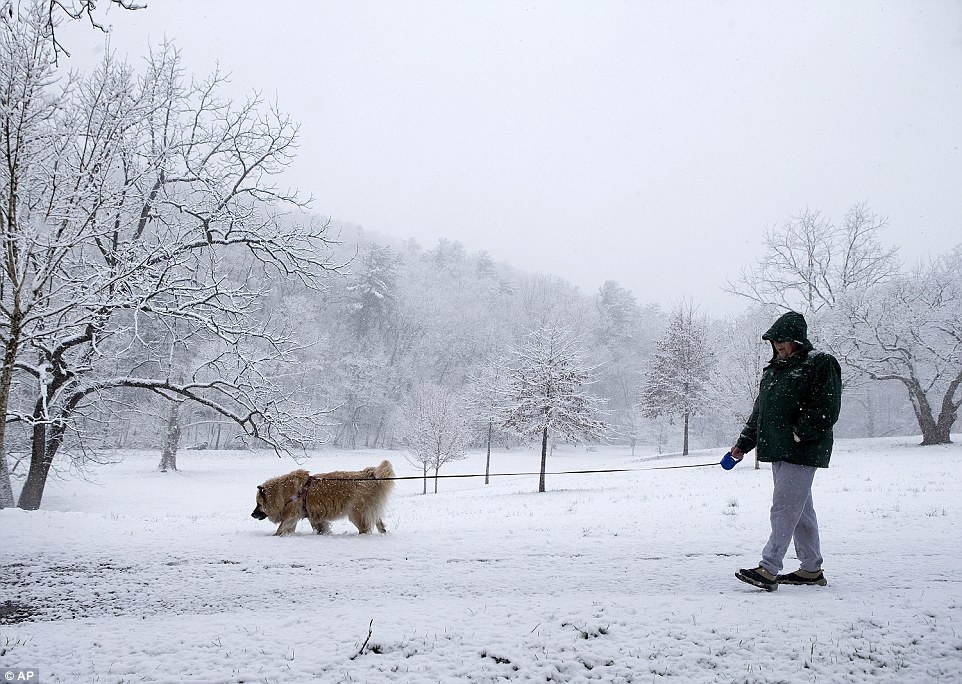 An owner walks his dog in a snow-covered park in Roanoke, Virginia on Tuesday morning 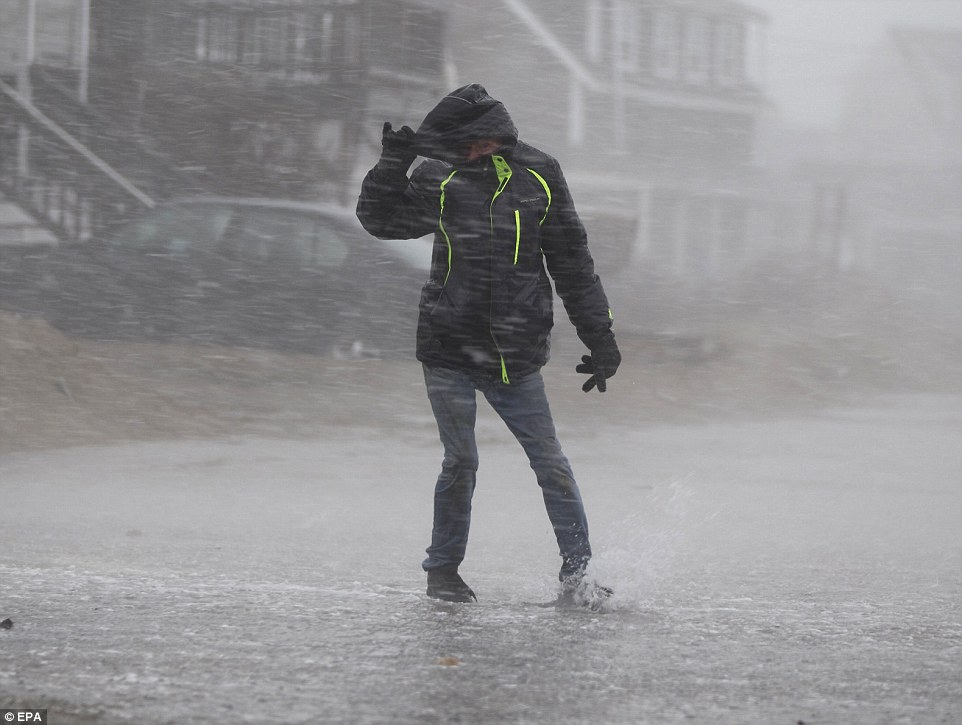 A pedestrian attempts to make his way through Scituate, Massachusetts on Tuesday after a blizzard warning was issued for the area 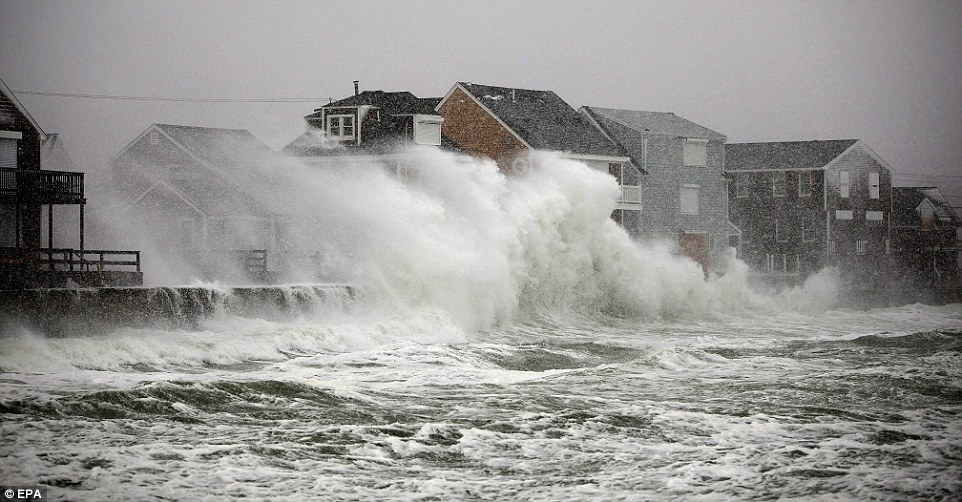 Waves crash over homes along the seawall in Scituate, Massachusetts on Tuesday morning

‘Three nor’easters in less than 2 weeks isn’t easy on anyone – and we are extremely grateful for the hard work of our first responders, utility and road crews, and municipal officials who have been working nonstop to clean up after these powerful storms,’ Republican Massachusetts Gov. Charlie Baker wrote on Twitter Monday night.

The peak bloom period for Washington DC’s cherry blossoms has been pushed back because of the cold weather.

The National Park Service has announced that it is pushing back the peak bloom date from the March 17-to-20 window to March 27 to 31.

National Park Service spokesman Mike Litterst said the area is suffering colder-than-expected temperatures which have forced the change to the peak bloom prediction.

Peak bloom occurs when 70% of the Yoshino cherry trees are in bloom.

The park service says the cherry blossoms’ flowers can last up to 10 days once they bloom. 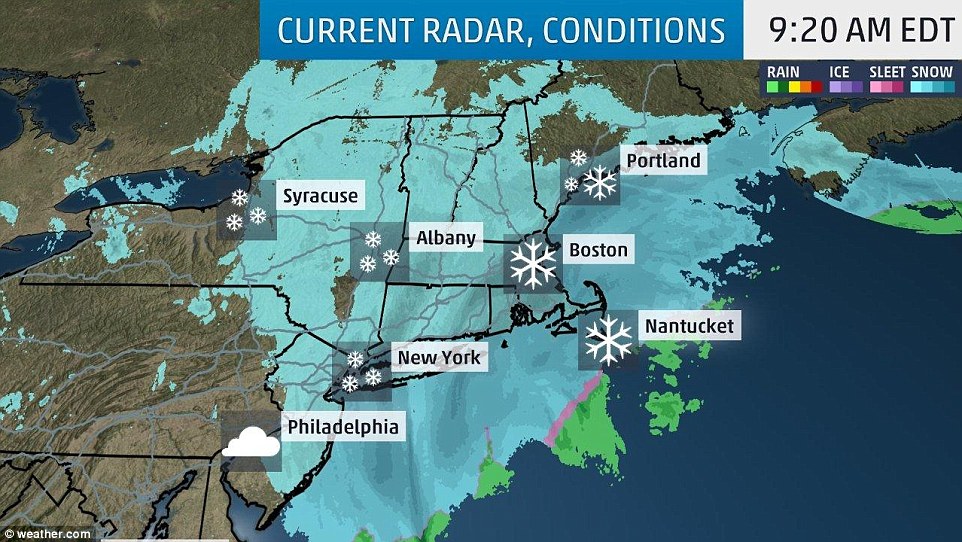 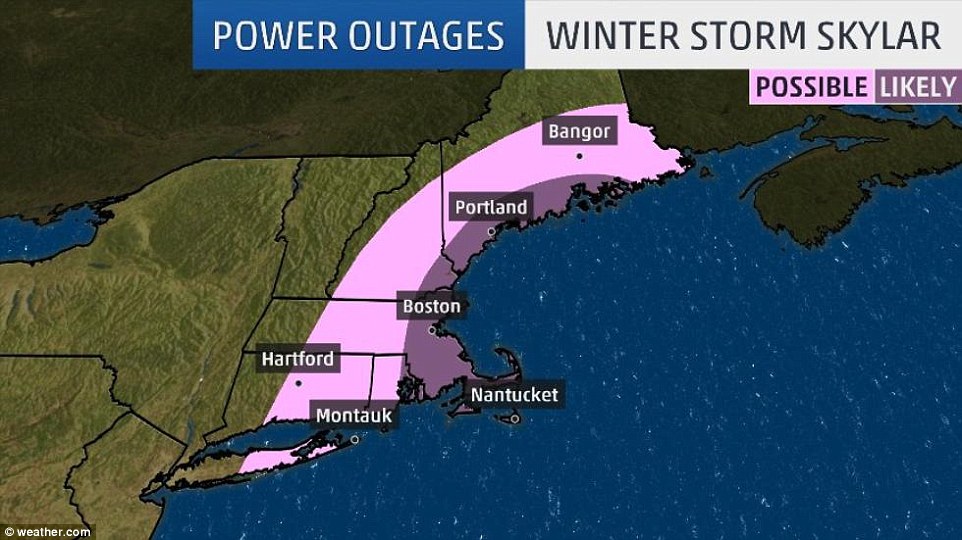 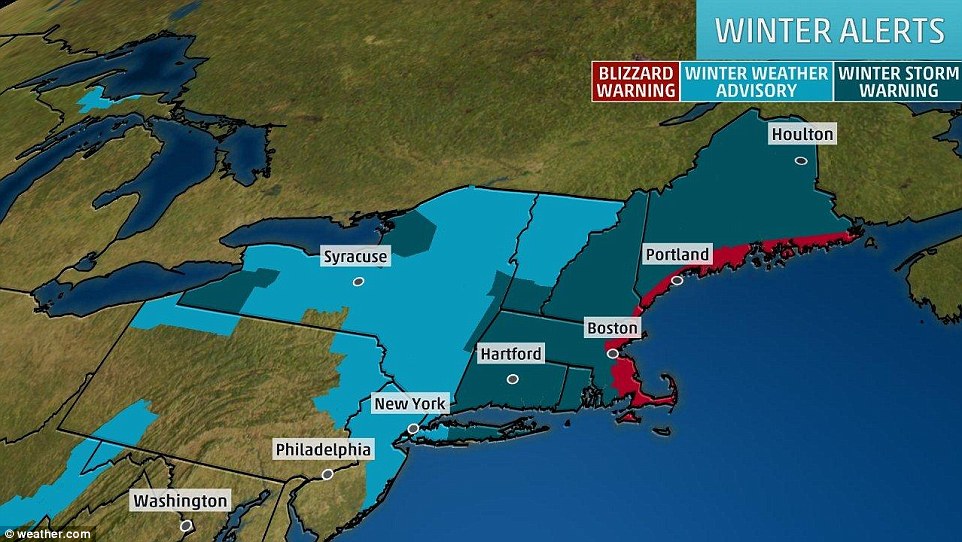 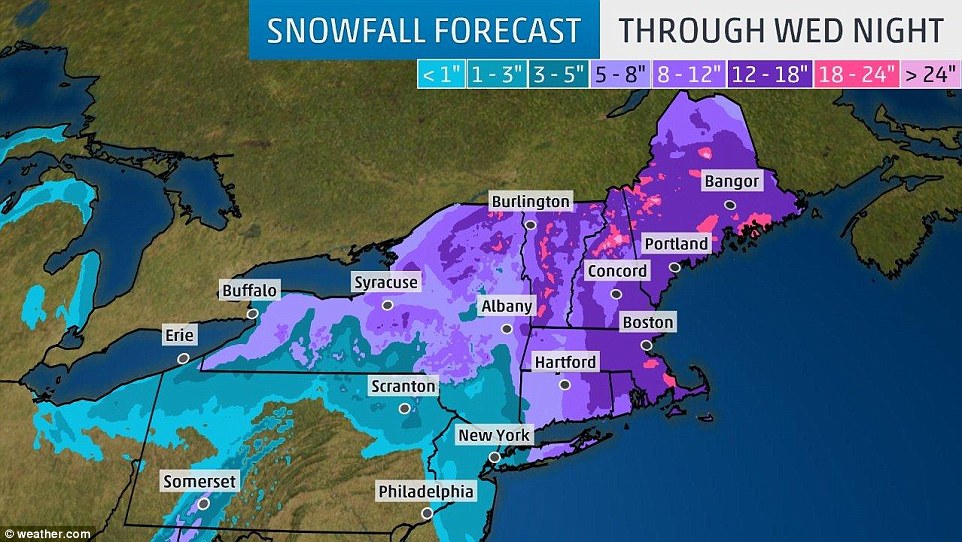 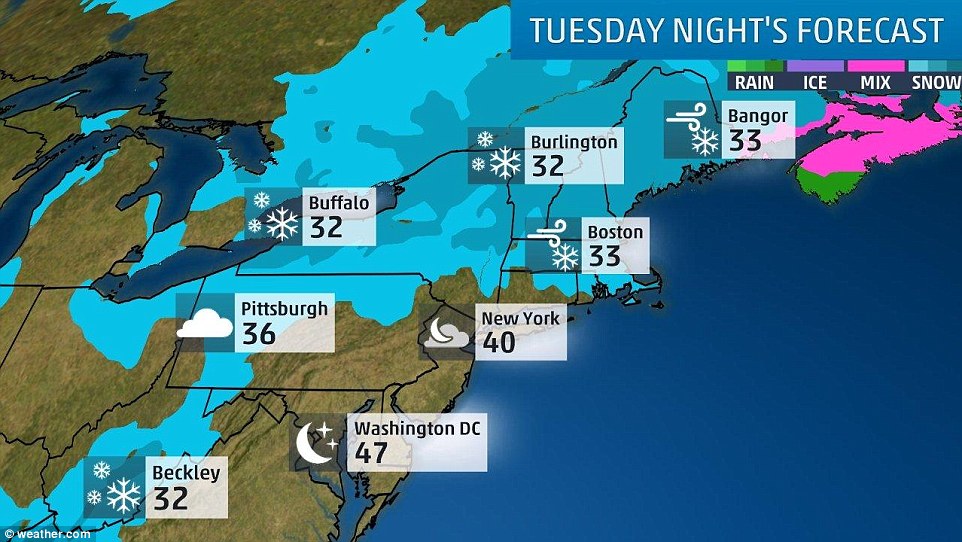 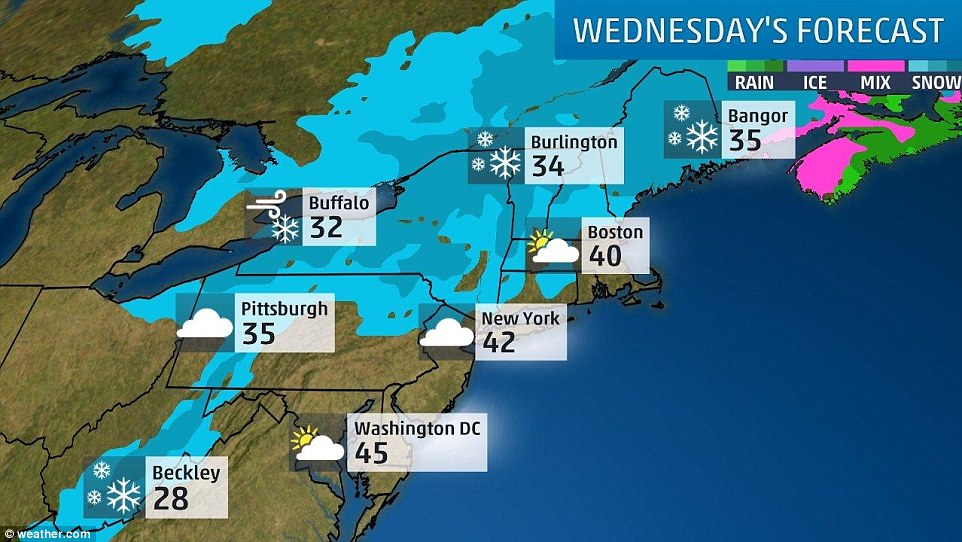