Rising concerns for road safety as cost-of-living crunch takes hold: A third of drivers are likely to delay or skip their car’s service to save money

With the cost-of-living crisis hitting people’s finances, a study has found that a large proportion of drivers may cancel their car’s annual service in a bid to save money.

A wave of surveys have already highlighted concerns that motorists could put themselves and others at risk by delaying essential vehicle maintenance as purse strings are tightened over a period of rising inflation, higher food prices and soaring energy bills.

The latest poll of more than 2,000 drivers in Britain has found that a third (32 per cent) are likely or very likely to skip their vehicle’s service in the next 12 months.

This could result in over 10million motors on the road not being checked over by mechanic for months, based on the number of cars registered in the UK.

Third of drivers to save money by avoiding car maintenance: A new investigation has added to concerns that there could be an increasing number of dangerous vehicles on our roads over the next 12 months

With records showing the 37.2 million passenger vehicles are in use, the investigation’s findings suggest that almost 10.5million could have problems and worn out parts usually identified, fixed or replaced as part of an annual check-up.

The study by MOT, servicing and repairs comparison site BookMyGarage.com found that almost two thirds (64 per cent) of UK motorists think it’s likely their vehicle will need a repair in the near future which they can’t afford to fix, due to growing financial pressures as the UK enters into a recession. 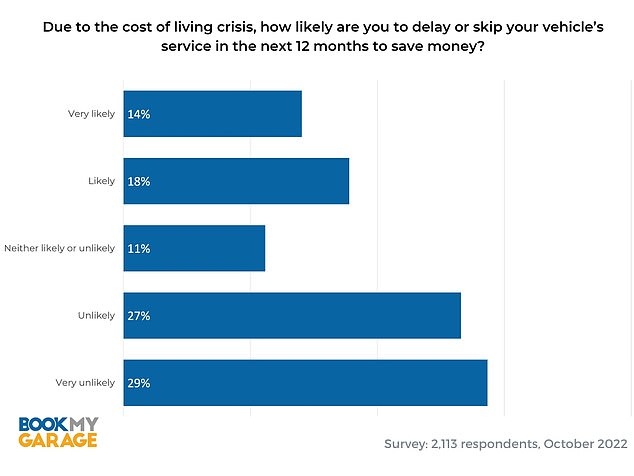 The latest poll of more than 2,000 drivers in Britain has found that a third (32%) are likely or very likely to skip their vehicle’s service in the next year 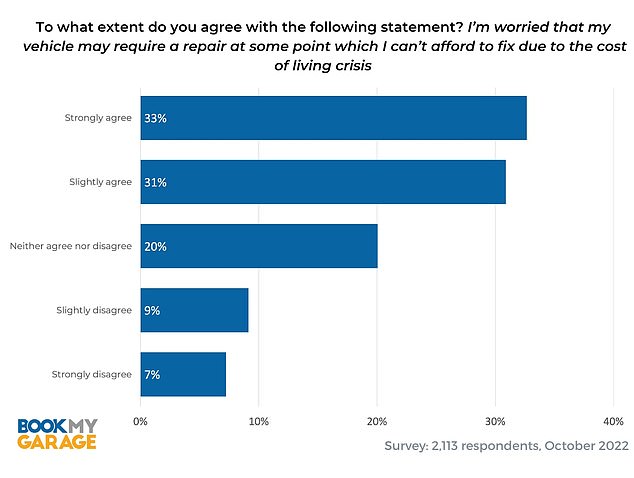 Almost two thirds (64%) of motorists said it’s likely their vehicle will need a repair they can’t afford to fix, due to growing financial pressures as the UK enters into a recession

This means drivers could be using their cars knowing they have serious faults that could cause a major risk to themselves and other road users.

One-in-10 cash-strapped motorists said they have even resorted to attempting car repairs themselves in an effort to save money, which raises even greater fears of dangerous vehicles being driven.

In a perfect storm for hard-up drivers, the UK’s CPIH inflation rate reaching 9.6 per cent in October has also forced the price of vehicle parts higher. 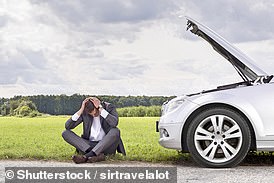 The list of the 10 car makers with the worst reliability records have been revealed this week by an extended warranty provider.

Warrantywise listed the 10 brands that came bottom in its Reliability Index, which is based on how many faults occur, how much they cost to replace and the amount of time cars are off the road.

The survey found that a fifth of the respondents will be looking to use cheaper replacement parts – including fitting budget tyres and replacing components with non-genuine parts – as a way of cutting down on repair bills, which also increases risk.

Commenting on the results of the survey of 2,113 drivers – which was undertaken in October – Karen Rotberg, co-founder of BookMyGarage, said: ‘Not having your car serviced may seem like an easy way to cut down on motoring bills, but the reality is that more problems are likely to occur in the long term and could cost drivers more money overall.

‘When a vehicle has a service, it’s inspected for any existing issues that often go undetected by a regular motorist. These problems can deteriorate over time and in some cases result in a costlier repair bill.

‘Vehicle servicing is a preventative measure and skimping on servicing could result in significant engine damage and a repair bill that exceeds the value of the vehicle. It could also prove to be dangerous, as safety-critical faults may go unnoticed and the risk of a breakdown is greater.’

She added: ‘We are fully understanding that these are difficult times for drivers. Replacement parts are more expensive, and garage owners are seeing their overheads skyrocket too.

‘While we emphasise the need for a vehicle service, we are also aware that some drivers may feel they have no choice but to skip having it done.’ 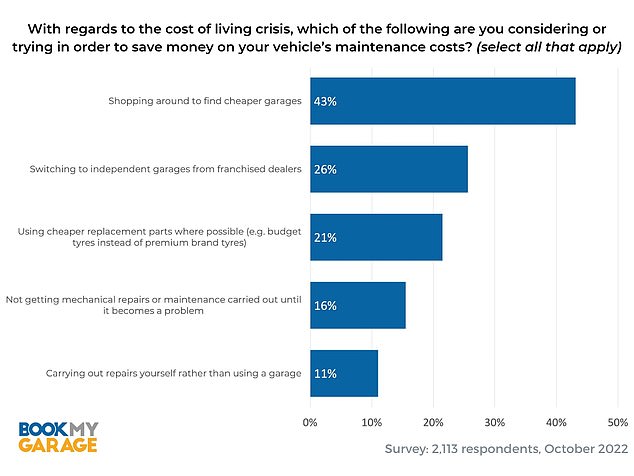 Many are shopping around for cheaper servicing costs, but a worrying number are considering fitting cheap parts to their cars to save cash – and others are attempting repairs themselves 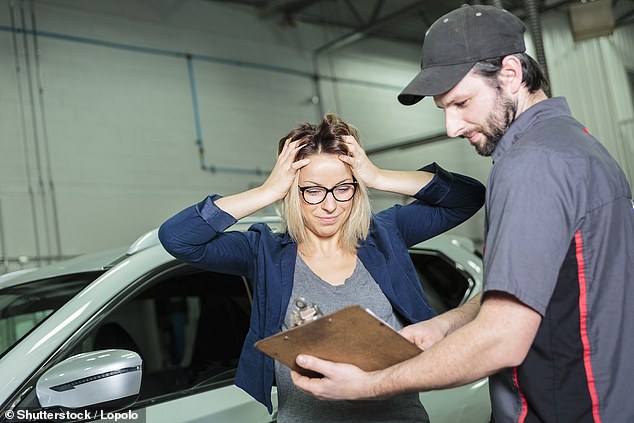 BookMyGarage’s investigation comes just a month after the RAC warned that a third of young drivers will be cutting back on spending on car servicing and maintenance when times are tough.

Its poll of 3,102 motorists indicated that 37 per cent aged 17 to 24 are putting off work on their vehicles as the cost-of-living crisis tightens the squeeze on their finances.

The motoring group warns that this is likely to result in ‘far larger’ bills in future, as problems escalate, as well as putting drivers and other road users at risk by ignoring potentially serious faults.

As early as April, the Motor Ombudsman raised its concerns about drivers delaying their vehicle’s service in a bid to save money.

Almost one in three of drivers in it asked said they intend to spend less on motoring this year due to squeezed budgets.