Third person in hospital after fourth package sent to Parliament

A man has been taken to hospital as a precaution after two suspicious packages were sent to Parliament, a day after two others were received.

Police were called into the parliamentary estate yesterday after a letter was sent to a politician, believed to be Mohammad Yasin, Labour MP for Bedford.

A man and a woman were yesterday taken for treatment yesterday before those packages were found to be harmless.

It emerged today that two more suspicious packages have been sent to the Houses of Parliament, with another man taken to hospital.

An ambulance is pictured at the Norman Shaw Buildings on the parliamentary estate, where police investigated reports of a suspicious package yesterday

Tory MP Michael Fabricant said politicians fear the letter was linked to the ‘Punish a Muslim day’ hate letters, which have been distributed to homes throughout the UK.

Speaking in Parliament yesterday, Mr Fabricant said: ‘Can I ask the House to think of the office for the MP for Bedford.

‘There was an incident in this place earlier today in Norman Shaw North involving him and his staff which may or may not be connected, but we think it might be, with this letter.

‘And we must pull together and ensure that this does not happen – not only here but also throughout the country.’

No evacuations have been carried out, but police are investigating. 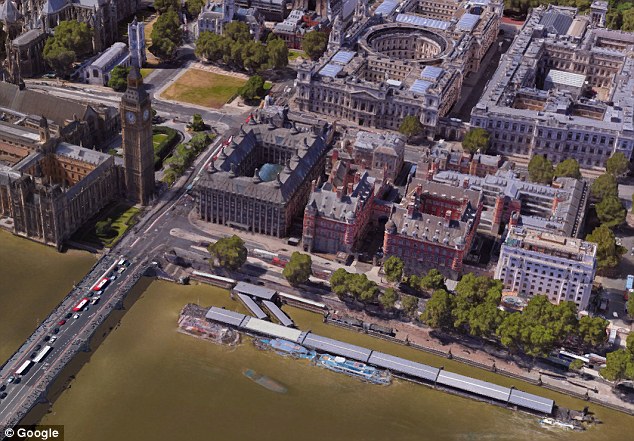 The red brick Norman Shaw buildings, where MPs have their offices, are next to Portcullis House on the banks of the River Thames

A spokesman for Scotland Yard said: ‘Police were called at 09:49 hours on Tuesday, 13 March to reports of a suspicious package at Norman Shaw Buildings, Victoria Embankment, Westminster.

‘Specialist officers are on scene and the package is being assessed. The London Ambulance Service is on scene. A man has been taken to hospital as a precaution.’

A Parliamentary spokesman said: ‘The Met Police are currently investigating suspicious items of mail in Norman Shaw North. We cannot provide any more details at this stage.

‘This is further to the two items investigated yesterday, both of which were found to be non-harmful. The Police are investigating the content of the letters to identify any potential links.’

The spokesman later said the suspicious substances was  found not to be hazardous.

The Punish a Muslim letters incite readers to attack Muslims. They have been branded a ‘blatant incitement to terrorism’ by some MPs.