Two historic churches in Syria’s Raqa will be declared free of explosives just in time for Christmas, but the devastation in the city has left no one to celebrate in them.

As its three-year reign over Raqa came to an end in October, the Islamic State group planted bobby traps all across the city, including in the two main cathedrals.

Deminers are now giving the houses of worship one last sweep to make them safe, but they remain in a terrible state and church officials say will not hold traditional Christmas services this year.

The Armenian Catholic Church of the Martyrs in Raqa’s city centre is barely recognisable, the cross atop its clock tower destroyed by jihadists years ago.

After IS took over Raqa in 2014, it used the church as a prison, digging an underground tunnel to travel undetected beneath an adjacent park.

Now, a six-person team from the Roj Mine Control Organisation — a non-governmental organisation working in Kurdish-held areas — use handheld detectors to track down the last of the mines in the church.

“With the holidays coming up, our aim is for our Christian brothers to come back to practice their traditions,” said technician Abdulhamid Ayo, 33.

He and his colleagues were dressed in khaki uniforms, a red band on their arm emblazoned with a skull.

“There are thousands of mines in the city. We’ve been able to clear half of Raqa and have removed 1,300 mines so far,” Ayo said.

A US-backed offensive ousted IS from Raqa in October but the city has been left ravaged by fighting, and only a small percentage of its pre-war population has returned as the year draws to a close.

“There’s absolutely nothing planned in Raqa,” said Boutros Mariati of the Armenian Catholic diocese in Aleppo, which oversees the Church of the Martyrs.

“The church is in ruins. Christians are going to visit, but there is no one living there.”

Messages scrawled on walls around the city warn of “Danger! Mines!”, and hidden explosives claim the lives of civilians nearly every day.

Behind Martyrs’ Church, 65-year-old Nayef al-Madfaa, a Muslim, is one of the few people to have returned — taking the risk to check on his property.

“They destroyed the church, and we no longer find happiness in anything,” said Madfaa.

“There never used to be a difference in Raqa between Muslims and Christians. We lived all together, happy.”

Gesturing to the deserted homes of his Christian neighbours, he sighed.

“All the Christians fled Raqa.”

Thousands of Armenians and Syriac Christians once lived in Raqa, making up around one percent of the city’s predominantly Sunni Arab population.

“They used to put the Christmas tree on this corner here, and all the kids would enter the church with their parents,” Madfaa recalled, saying his grandchildren would get gifts from the church on Christmas.

“There was joy everywhere — but we were all kicked out. Everyone was displaced,” he added.

“When I look out and see nothing but ruins and destruction, I get sad.”

When IS seized Raqa in 2014, Christians and other minorities fled, fearing the choice between converting to Islam, paying a tax called jizya, or being put to death.

After finishing work at the Church of the Martyrs, the demining team began sweeping the famed Greek Catholic Church of the Annunciation in the Thakana district.

An empty alcove on the side of the church that once housed a statue of the Virgin Mary is now marked with Islamist graffiti reading “God is Great, Glory to God.”

In 2013, jihadists entered the church and torched the interior, daubing their extremist slogans over the now partially-destroyed walls.

“Daesh (IS) made this church a weapons warehouse during the clashes. It burned all the books and Bibles that were inside,” said Mahmoud al-Jumaa, 23. 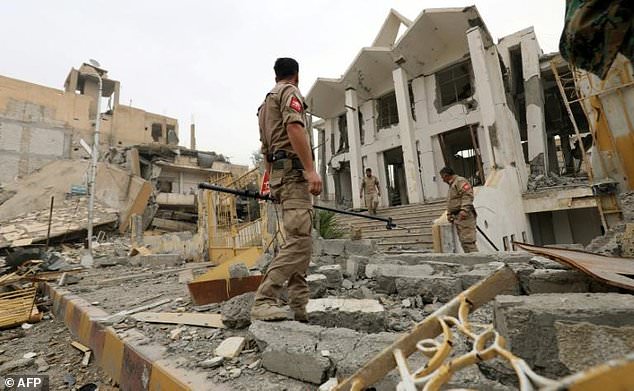 After Islamic State took over Raqa in 2014, it used the church as a prison, digging an underground tunnel to travel undetected beneath an adjacent park

The Thakana resident riding by on his motorcycle with a friend stopped to look at the damaged church.

“When the clashes got intense, they blew it up and yelled, ‘God is greater than all the infidels, and we will blow up this church so that (US President Donald) Trump cannot pray in it,'” Jumaa said.

He, too, has pleasant memories of living alongside Raqa’s Christians.

“We were the church’s neighbours and used to celebrate with our Christian brothers during their holidays, and they did the same for us,” he told AFP.

“But now, there are no more Christians. They all left, and with them the celebrations and beautiful Christmas holidays.”