This French theme park will thrill the whole family

What a performance! This fantastical French theme park, with huge-scale live shows, will thrill the whole family

By Robert Gore-langton For The Daily Mail

Six thousand of us are packed into a vast replica colosseum in rural France. The Emperor is in his toga, the Romans are being booed and the captive Gauls look nervous.

Then, half a dozen racing chariots thunder on, the horses’ hooves spurting sand. An axle snaps, and terrifyingly a charioteer is dragged along.

The crowd roars its approval. This is better than Ben-Hur.

Knight’s tale: The Secret of the Lance show, with its revolving medieval castle, is pure magic

A condemned Gaulish woman is chained up to be eaten alive. Cue a pride of white lions and a massive tiger. The big cats end up guarding, not eating, their lunch. The Gallo-Roman circus is the attraction at Puy du Fou in north-west France, an extraordinary French theme park with no rides, no burgers and no queues.

Instead, it’s dedicated to extravagant shows featuring aspects of French history. It is second only to Disneyland Paris for visitor numbers. If you want to see horses galloping through water on a massive indoor stage with flamenco dancers sloshing about, this is for you.

Some shows are vaguely historical, others pure nonsense, such as the lonely damsel in a ruined castle who makes friends with the birds. What follows is an avian version of the Red Arrows. Falcons, kites, eagle owls and vultures all fly at speed six inches above your head.

The park, set in 50 hectares of woodland and lakes, is in the Vendee, an hour south of Nantes airport. This royalist region was laid to waste in the French Revolution: the subject of a major spectacle in a vast rotating indoor theatre (2,400 seats) in which a dashing officer, Charette, insists he gives the order to fire at his own execution. Quel panache!

Most shows last 30 minutes or less. Boys will love the action in ‘Les Vikings’. One longboat appears from under the water in the river then runs round a village that burns to the ground. They do this one five times a day.

The family who created the park in 1977 restored a ruined chateau. Today it is full of suits of armour that come alive electronically. At any point you can beat a retreat to your themed hotel — mine is a medieval castle, built last year — or one of 27 pretty good restaurants. 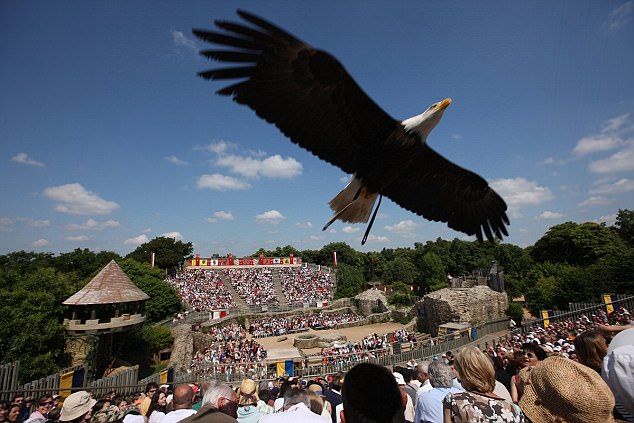 The evening show is called Cinescenie — the largest outdoor spectacle in the world with a cast of thousands, plus horses.

Pigs, geese, wolves and ostriches all get involved. Forget Mickey Mouse, Puy du Fou is a close encounter with the truly epic.

Would it work in the UK with our animal rights obsession? ‘Why not?’ an official says to me. ‘Ze animals, zey are so ‘appy!’

Easyjet (easyjet.com) flies to Nantes from £94 return (a one hour drive to the hotel). Two nights at Puy du Fou (puydufou.com) costs from £478 per family of four, with B&B and three days’ park access.