This is Eileen | Daily Mail Online

Shift work and takeaways were the prime suspects when police officer Eileen Walsh piled on the pounds – and she hid the evidence behind baggy jeans and hoodies. But now she’s lost almost four stone and rediscovered her inner siren…

A few years ago, I was working on patrol with the police and attended an incident where a member of the public spotted me at the scene. Later, he rang the station to ask if he could speak to me, as he was a potential witness. He didn’t have my name, so he left a description – ‘big lass with a pretty face’. When I saw it in the police log, I didn’t know whether to laugh or cry. I was a size 16 and didn’t feel overweight, but was that how people really saw me? Before joining the police at 19, I’d never had any issues with my weight. I’d been a size-10 gymnast with a six-pack stomach and could eat anything I wanted. At 17, my cousin John Joe, who was the same age as me, was killed in a motorbike accident, which left the whole family grieving and devastated. For two years,

I love being a police officer. There are some difficult times, such as when I have to deliver devastating news to a family. But my own experience helps me approach it in the best way possible. There are child-neglect cases and road traffic accidents that are difficult to forget. But there are also very satisfying times, such as when we catch a criminal and see them jailed as a result of our hard work. However, one of the problems with being in the police is the shift patterns. I’m in CID now but, when I was on nightshift patrol, I worked mostly with men who seemed able to eat anything they liked without piling on the pounds. They would think nothing of ordering a takeaway curry on their meal break at 2am and, of course, I joined in. Before long I was eating a takeaway pizza, curry or Chinese four nights a week. On rest days, we’d socialise together and have greasy doner kebabs and pints of lager. Unsurprisingly, within the first six months of joining, I was up to a size 16. 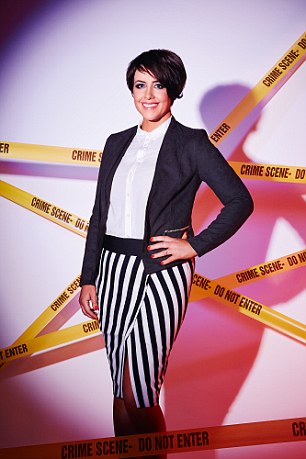 Although I was overweight, I was very confident and never had a problem socialising. The fact that I’m so tall and ‘carried the weight well’ helped, too. But looking back, perhaps it was a false confidence. There were times that I knew I needed to slim down. As police officers, we are given riot training every two years, learning how to deal with petrol bombs and holding a shield against a crowd.

Having been so athletic in my younger days I thought I’d find it easy, but it was exhausting – I passed but by the skin of my teeth. Clothes shopping would leave me feeling down. I’ve always liked fashion and feeling glamorous but I’d search through rails of trendy clothes and they’d never have my size. I lived in jeans, trainers, cardigans and hoodies. I met Rob through work – he’s a police constable – and we clicked immediately. My weight was never an issue for him and he proposed within six months. But as an athletic

6ft 2in, he can eat whatever he likes and never put on an ounce. We both like to cook together and as I was so happy, I never thought about how my weight was creeping up.

The turning point came in November 2011. Rob and I were getting ready to attend an annual police ball and I picked out a black dress that I loved. It was a size 16, but it wouldn’t zip up. Rob had to pull the dress together as I held my breath; 20 minutes later as I was getting into the taxi, the zip broke and the dress ripped wide open. Devastated, I ran back into the house in tears – nothing like that had happened before.

I ended up wearing a less flattering black dress and felt like a beached whale. It was the worst feeling in the world. My confidence was shot to pieces for the first time and it was then that I remembered a friend on Facebook who had joined Weight Watchers and had been putting weekly updates on the site. In a year, she had lost more than 4st and I couldn’t believe the transformation. I decided to get Christmas out of the way and in January 2012, I joined a meeting at Ovenden, Halifax. When I stepped on the scales and saw my weight for the first time, I was surprised but not upset. It made me more determined than ever to lose the weight. I stuck to three proper meals and would treat myself to chocolate and a coffee each day. In that first week I lost 8lb. It’s a lot, because I’d changed the way I ate completely, and it was a great confidence boost. I hadn’t denied myself anything and never felt I was on a ‘diet’. Within weeks I had lost 1st and I kept going. There was a period when I stopped focusing on my weight loss, but once I rejoined Weight Watchers, my success continued. When Rob and I went to the police ball again, I wore the same dress that I’d burst out of, but I had to have it taken in at the dressmakers. I felt like a million dollars – I’d done it!