‘This is horrendous. We’re all scared,’ a Biden adviser admitted as the former VP retreated from NH

Behind Joe Biden’s brave-faced campaign, advisers are ‘scared’ after the former vice president performed so poorly in the first caucus and primary of Iowa and New Hampshire, coming in fourth and fifth place respectively.

‘This is horrendous. We’re all scared,’ a Biden adviser to Politico, speaking anonymously since the comments conflict with the face the campaign is broadcasting.

Biden fled New Hampshire before the polls even closed at 8:00 p.m. Tuesday night and instead live-streamed into his primary night event, which are traditionally attended by the candidate.

He took a private jet to South Carolina, the last of the four early primary states, where he claims he will do better because the majority of the Democratic primary voters are black. 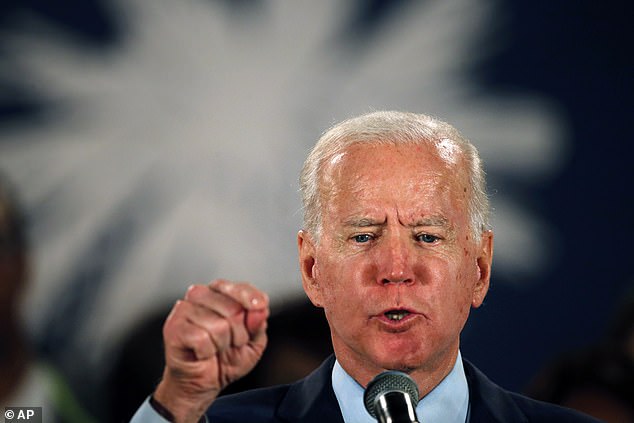 Biden fled New Hampshire as it became more clear he didn’t have the support there, and instead took a private jet to South Carolina before the polls in the Granite state closed 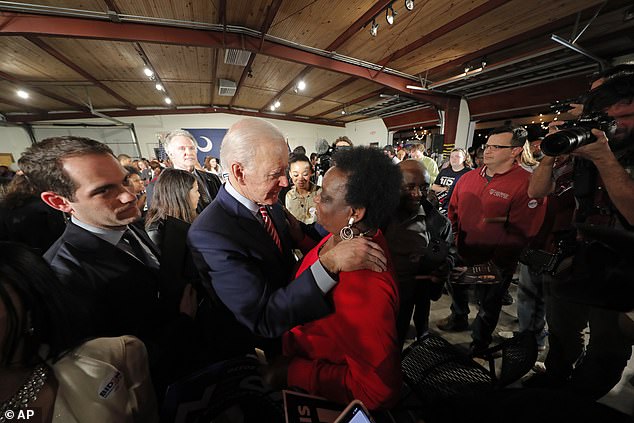 The former vice president has said he would do better in more diverse states, claiming he has the most support from the black community than any other candidate

Biden has claimed that while his competitors might best him in Iowa and New Hampshire, they won’t be able to maintain the lead in more diverse states, claiming he has the most support from minority communities than any other candidate.

But polls are showing that Biden’s African American support is already starting to slip.

Harpootlian has also come under fire for comments seen as racist, and billionaire Tom Steyer called on Biden to denounce him during Friday’s debate in Manchester, which he refused to do.

‘There’s blood in the water,’ Quentin James, executive director of The Collective, a political committee that backs African-American candidates, said, according to Politico.

‘Black voters are starting to leave him now,’ he continued. ‘A big reason lots of black voters were with Biden is they thought he was the best person to beat Trump. And they thought one reason for that is that he had the support of white voters. Now they see he has done so poorly with white voters and he no longer looks like the electability candidate.’

Biden, who led in most polls throughout the campaign leading up to the Iowa caucus and New Hampshire primary, didn’t even crack double-digits Tuesday night.

With nearly 90 per cent of reporting accounted for, Biden holds only 8.4 per cent as of Wednesday morning.

Biden still has to get through caucuses in Nevada next weekend before South Carolina votes in their primary the following week.

‘Where I come from, that’s an opening bell,’ he continued. ‘It ain’t over, man. We’re just getting started.’ 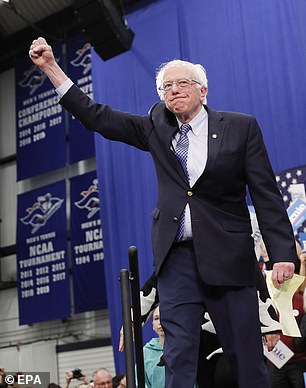 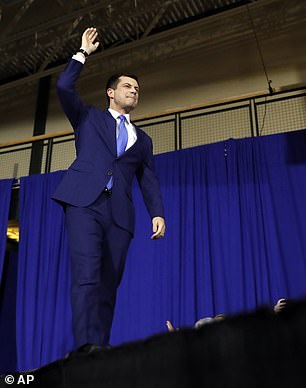 With nearly 90 per cent of precinct reporting in Wednesday morning, Buttigieg continued to close that gap and the two are now sitting only 1.3 per cent apart.

The Vermont senator was likely hoping for a bigger win in the state neighboring the one he represents, but many New Hampshire voters expressed as they were entering or leaving voting locations Tuesday that they either wanted a more moderate choice or that their decision was made on a whim as they entered the polling booth.

New Hampshire, however, gave the Democrats its first clear winner after reporting was delayed for nearly a week in Iowa after an app malfunction.

Buttigieg won the most delegates in Iowa after skirting a win against Sanders by just .1 per cent.

And New Hampshire could be chalked up as another potentially too-close-to-call race as senator’s lead continues to narrow.

The two candidates arguable have equal claims to frontrunner status as it stands now, and although they have called for unity within the party, it’s clear the two are headed for an even bigger clash between the progressives and moderates.

From Sanders’ primary night celebration at Southern New Hampshire University, a rambunctious crowd of supporters vehemently booed the jumbotron screen when Buttigieg was shown giving a speech at his watch party 30 minutes away in Nashua.

Sanders also used part of his victory speech to slam candidates who take money from billionaire – an obvious jab at the former South Bend, Indiana mayor.

Mid-way into Buttigieg’s speech, networks began calling the primary for Sanders, who is the oldest candidate at 78.

Buttigieg, who at 38-years-old is the youngest, used his remarks to condemn ‘ideological purity over an inclusive victory.’

Minnesota Senator Amy Klobuchar also came up with surprising results Tuesday night when she emerged as the third place candidate after receiving a boost from the debates at Saint Anselm College in Manchester on Friday.

Buttigieg and Klobuchar made up 44.2 per cent – a significant figure indicating New Hampshire voters have an appetite for a more moderate candidate.