For anyone watching their weight, eating out can be a minefield — even seemingly virtuous dishes can be laced with calories, fat and sugar.

While some restaurants print at least some nutritional information clearly on the menu, others keep it hidden away on a website — or don’t provide it at all.

It’s an issue that was highlighted last month when the campaign group Action on Sugar reported on the astonishing amount of calories and sugar in some pancakes, waffles and pretzels on restaurant breakfast menus — one of nine food categories identified by the Government as being key contributors to childhood obesity.

It found that The Breakfast Club’s Salted Caramel Banoffee Pancake, for example, contained 1,800 calories and would take a staggering eight hours — or 24 miles — of brisk walking to burn off.

Here, with the help of dietitian Helen Bond, we reveal just how many calories you consume when you go out for a meal — whether it’s a slap-up feast or a bowl of noodles or other seemingly healthy options — the nutritional value of these meals, and estimate the shocking distances you would have to walk to burn off the calories.

Our analysis is based on someone weighing 10st walking briskly, using walking routes on Google Maps.

This half a chicken meal at Nando’s contains 1,186 calories and would take a 16.5mile walk to burn off, taking around 4 hours and 50 minutes

How far to burn it off: Walk 16.5 miles, which would take around 4 hours and 40 minutes (from Regent’s Park in London to Cheshunt in Hertfordshire).

The half chicken itself is only 578 calories, but it’s the sides that bump this up to well over half your daily calories if you’re a woman. The fries have 467 calories and the macho peas (peas with parsley, mint and chilli) another 141 calories, though these count as one of your five-a-day and provide 28 pc of your daily fibre recommendation.

A lighter option would be chicken thighs with spicy rice and long-stem broccoli (825 calories). 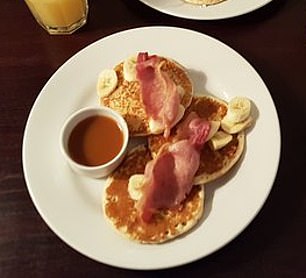 Pancakes with bacon and banana at cafe Rouge would take 10.3miles to walk off

How far to burn it off: Walk 10.3 miles, which would take around 2 hours and 55 minutes (from Buckingham Palace to Croydon).

This is a high-calorie way to start the day, considering a good ballpark for breakfast is 400 calories. It also has a whopping 3.1g salt (more than half your daily limit), along with 67.7g of sugar — mostly added from the maple syrup topping.

How far to burn it off: Walk 17.5 miles, which would take around 4 hours and 58 minutes (from Sheffield to Worksop). 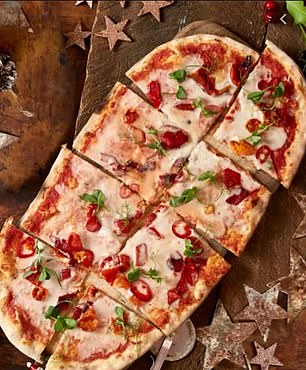 Zizzi’s Vegan pepperonata rustica classic pizza contains 1,366 calories and would take the equivalent of a walk from Sheffield to Worksop to work off

The coconut oil sends the saturated fat content to a high 47g — we’re only meant to have 20g a day to keep cholesterol levels low.

How far to burn it off: Walk 13.2 miles, which would take around 3 hours 45 minutes (from Big Ben in Central London to Harrow).

As with most salads, the issue is not so much the vegetable-based ingredients — salad leaves, tomatoes, black olives and red roquito pearls, plus chicken and goat’s cheese — but the high-calorie additions.

The croutons, dressing and dough sticks on top take this ‘salad’ to close to half a woman’s daily 2,000 calorie recommendation. Simply taking off the dough sticks will save 261 calories.

Waistline-wise you’d be better off having a margherita pizza (834 calories). 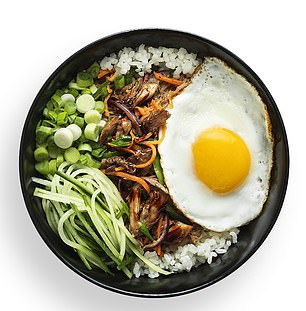 This Wagamama’s grilled duck donburi contains 1,408 calories and is high in carbs and fat

How far to burn it off: Walk 19.5 miles, which would take around 5 hours and 30 minutes (from Birmingham to Coventry).

Wagamama introduced a few lighter — less than 650 calories — dishes this summer, but the old favourites are still highly calorific.

At 1,400 calories, grilled duck donburi — a huge portion of shredded duck in a spicy teriyaki sauce, plus a crispy fried egg and vegetables on a big bed of sticky white rice — is very high in both carbs and fat (with 17.3g, 86.5 per cent of a woman’s daily saturated fat limit).

Although the duck is grilled, it generally includes the skin, making it fattier and calorific. This is compounded by the size of the portion and lots of rice. 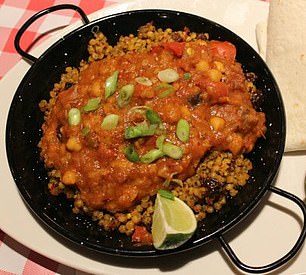 You would have to walk 15 miles to work the 1,077 calories in this aubergine and red lentil tagine from Harvester off

How far to burn it off: Walk 15 miles, which would take around 4 hours and 10 minutes (from Leeds to Huddersfield).

This veg dish of giant couscous cooked with apricots, raisins, coriander and red pepper, topped with Moroccan-spiced stew isn’t a bad option as it has one portion of vegetables, and is low in saturated fat with 6.8g (a third of a woman’s daily recommended maximum).

It also has 26.1g (over half the daily recommendation) of appetite-curbing protein per portion.

But with the flour tortilla and oil-rich hummus it’s served with it adds up to a whopping 1,077 calories.

It is also heavily-seasoned and has 5g of salt — which is 83 per cent of the daily recommended maximum of this dietary component, and raises blood pressure. 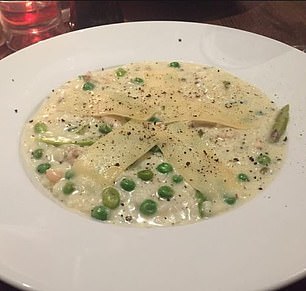 How far to burn it off: Walk 14.6 miles, which would take around 4 hours (from Oxford to Bicester).

Prezzo is transparent about calories in its meals; they are all prominently displayed on the menu.

In total, the dish is more than half your daily energy needs, and the white arborio rice and bread will significantly raise your blood sugar levels, (and over the long term, also raising insulin levels linked to obesity and type 2 diabetes). 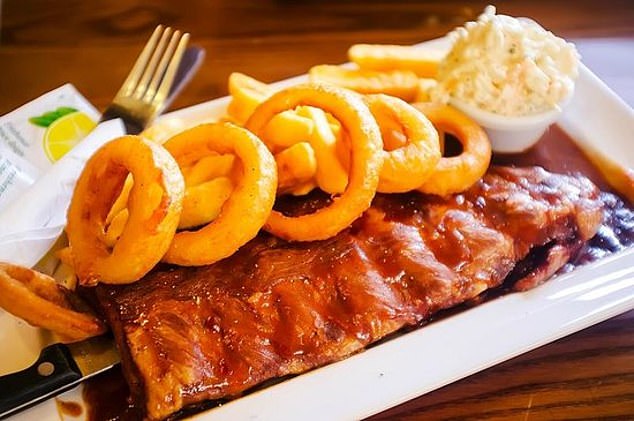 How far to burn it off: Walk 12.7 miles, which would take around 3 hours and 30 minutes (from Swansea to Llanelli).

Listed under the ‘small plates’ section of the menu, this is definitely not small in the calorie department, with just under half your daily intake.

There’s no other nutritional information, but this is likely to be high in saturated fat and salt too from the fatty seasoned meat. The onion rings are mainly batter and can’t count as one of your healthy five-a-day. 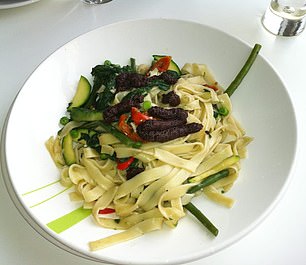 The oil from the roasted veg, tapenade and olive oil in the dish pushes up the calories in Ask’s Vegan fettuccine verdure

How far to burn it off: Walk from 14.5 miles, which would take around 4 hours (from Aberdeen to Stonehaven).

The dish is made with flat ribbon pasta, green beans, tomatoes and spinach and olive tapenade.

Around 58 per cent of the calories come from fat — including good fat from olives and plant-based oil — meaning the saturated fat is a reasonable 8.5g (42 per cent of the recommended daily limit).

It’s the oil from the roasted veg, tapenade and olive oil in the dish that pushes up the calories. 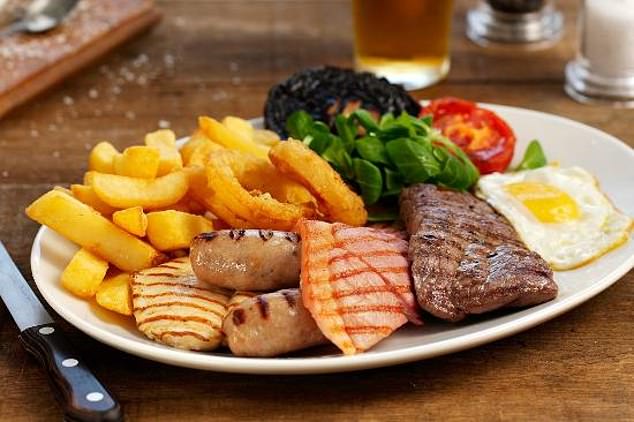 How far to burn it off: Walk 24 miles, which would take around 6 hours and 50 minutes (from Brighton to Eastbourne).

Consisting of rump steak, chicken breast, gammon, sausages, onion rings, tomatoes, mushrooms, fried egg and a side of triple cooked chips, this is a whopper of a meal.

If you are trying to keep to 2,000 calories a day, you’d only be able to eat another small bowl of cereal with milk and a banana all day.

This meal exceeds a woman’s 20g daily saturated fat limit (it contains 26g) and at 9.7g, it also exceeds the recommended daily salt intake (6g) by more than 60 per cent.

It will give you plenty of iron and B vitamins needed for energy levels though. 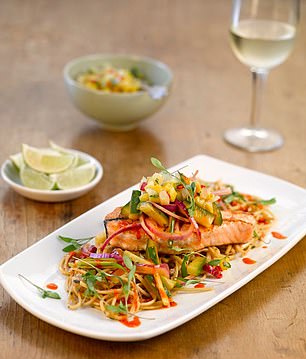 The Thai curry with grilled salmon fillet at Slug and Lettuce would take a 12.8mile walk to work off

How far to burn it off: Walk 12.8 miles, which would take around 3 hours and 30 minutes (from Leeds to Huddersfield).

On its own, this Thai vegetable curry with basmati rice has 650 calories, and the salmon adds another 264 calories.

The total is close to half a woman’s daily calories and contains 24.5g saturated fat — more than the 20g women are recommended daily, with most coming from coconut milk in the curry.

The heart-healthy omega-3s in the salmon will partially offset this, and the cauliflower, green beans, mangetout and peppers in the curry will probably add up to a couple of vegetable portions, so it’s not an entirely bad.

PS.. It’s not just the food that has to be walked off 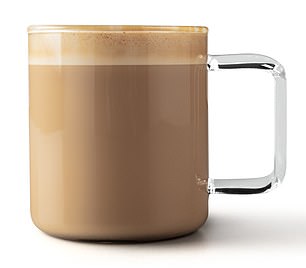 How far to burn it off: Walk 6 miles which would take around 1 hour 50 minutes, (from Edinburgh to Musselburgh).

Made with espresso, regular syrup and oat milk, this latte has more calories than a decent sized bowl of porridge.

Oat milk is the highest calorie and sugar milk on the Starbucks menu.

If made with semi-skimmed cow’s milk, this coffee has 324 calories, and with almond milk it only has 210 calories.

On the plus side, oat milk provides a good source of fibre — there’s 8.8g or nearly 30 per cent of your daily recommended intake in this coffee.

All prices given may vary depending on region.