‘This is not China, this is the UK’: Hong Kong pro-democracy activist says he feared he would die

‘This is not China, this is the UK’: Hong Kong pro-democracy activist says he feared he would be killed when he was beaten by ‘Beijing thugs’ during demo at Chinese consulate in Manchester

The Hong Kong pro-democracy protester dragged to the ground and beaten by ‘Beijing thugs’ said today ‘I thought I might die’.

Bob Man was dragged inside the gates of the Consulate General of the People’s Republic of China in Rusholme.

He was forced to the ground and assaulted by at least five men while a police officer tries to pull the attackers off him.

Mr Man told Sky News: ‘I was thinking I might die inside because it’s not surprising they’d do that. If the police officer didn’t pull me out, I’d have died inside and they could do nothing.

It all happened too fast. I tried holding on to the gates but couldn’t hold for too long – they then threw me to the ground and started to kick and punch me.’

‘There’s no respect, they’re rude, it shouldn’t be like that here. It’s not China, this is the UK, you shouldn’t do that.’

Hong Kong pro-democracy protesters had reportedly organised a peaceful protest outside of the Consulate in response to the 20th National Congress of the Chinese Communist Party, where President Xi Jinping is widely expected to announce another five years in power. 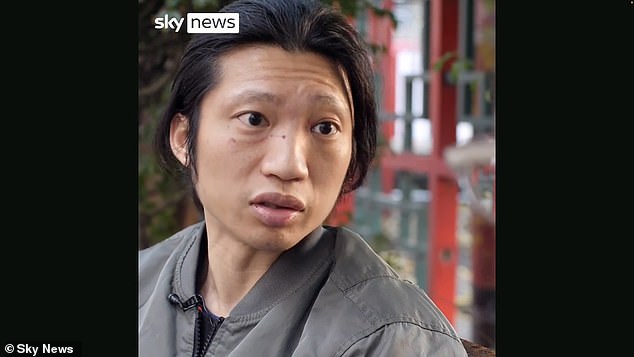 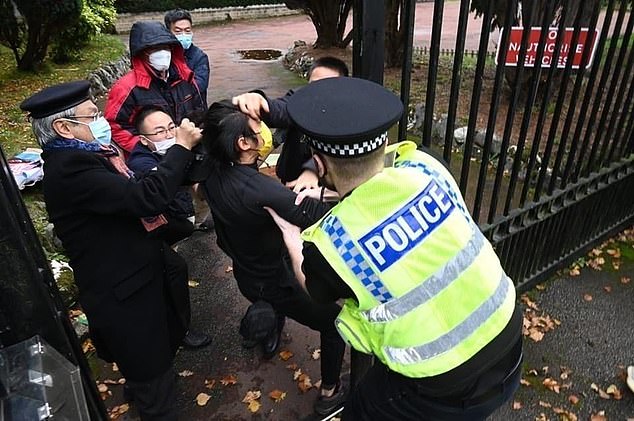 Video footage shows what appeared to be a protester being dragged inside Chinese consulate’s gate in Manchester, prompting calls for the UK government to investigate

‘The Government must demand a full apology from the Chinese ambassador… and demand those responsible are sent home to China.’

He told The Daily Telegraph: ‘I guess that like everything else the police are endlessly conflicted and are probably worried about a diplomatic incident. But this is on British soil, for God’s sake.’

The UK officers appeared reluctant to step into the Chinese consulate itself while attempting to drag the protestor away.

Unlike embassies, consulates remain under the jurisdiction of the host country, but are often afforded special privileges such as immunity from certain laws.

Labour MP for Hornsey and Wood Green Catherine West, who also serves as shadow minister for Asia and the Pacific, said she would raise the issue in parliament ‘urgently’ and called on both the Home and Foreign Secretaries to investigate.

‘This would be unacceptable on the streets of Hong Kong and against the provisions of the Joint Declaration to uphold democratic rights and freedoms. BUT this is Manchester,’ Gwynne told the Manchester Evening News. 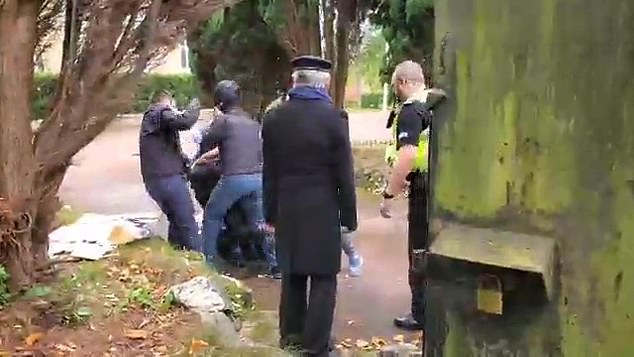 The UK officers appeared reluctant to step into the Chinese consulate itself, which enjoys special privileges and usually falls outside the jurisdiction of local police 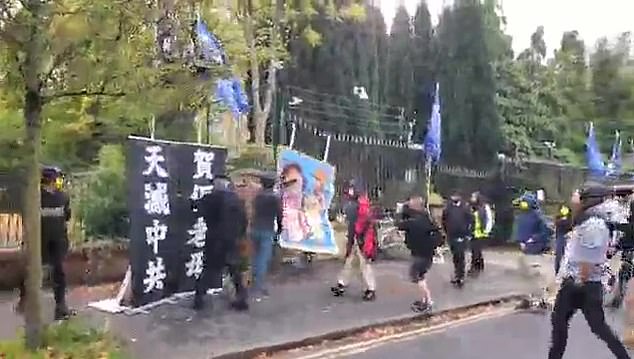 A spokesman for Greater Manchester Police said: ‘Police are aware of an incident that took place at around 3pm on Sunday 16 October 2022 at the Chinese Consulate in Manchester involving Hong Kong protestors.

‘Officers responded immediately to diffuse the situation and enquiries are ongoing at this time to understand the full circumstances. A police patrol plan is in place in the area following this incident.’

The news comes as Xi Jinping kicked-off the 20th CCP congress on Sunday with warnings that he may use force to retake Taiwan.

The Chinese leader is set to cement his place as the country’s most powerful ruler since Mao Zedong after removing term limits installed by his predecessors to curb the power of the CCP chairman.

The Chinese Embassy did not respond to requests for comment. 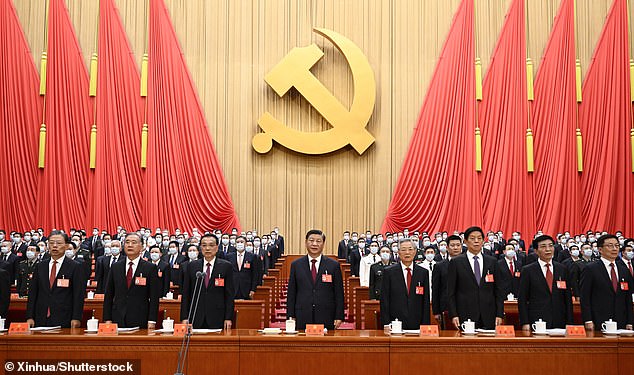 Chinese President Xi Jinping (centre) opened the 20th congress of China’s ruling Communist Party on Saturday, where he is expected to win a third leadership term and secure his place as the country’s most powerful ruler since Mao Zedong 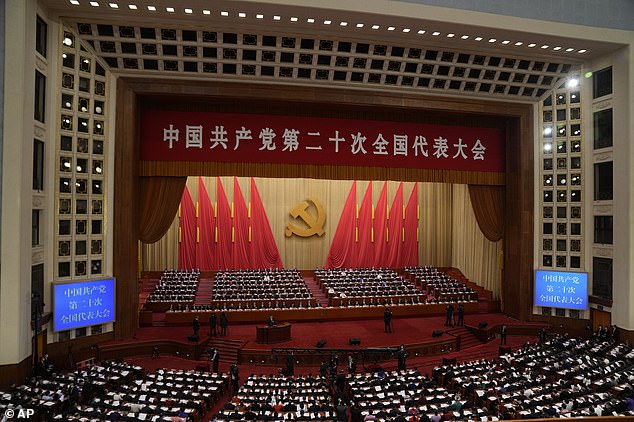 Xi did away with presidential term limits in 2018, clearing the way for him to break with the precedent of recent decades and rule for a third five-year term, or longer

What is the National Congress of the Chinese Communist Party?

The National Congress of the CCP is held every five years and represents the highest body within the ruling Chinese Communist Party that governs China.

The congress is where the leadership of China is decided, with sitting president and chairman Xi Jinping widely expected to extended his term for at least another five years on Sunday, marking the 20th congress.

Between 1982 and 2018, the Chinese constitution stated that the president could not serve more than two consecutive terms.

But Xi did away with presidential term limits in 2018, clearing the way for him to break with the precedent of recent decades and rule for a third five-year term, or longer.

The twice-a-decade congress is expected to reconfirm Xi as party general secretary, China’s most powerful post, as well as chairman of the Central Military Commission.

In the run-up to the congress, the Chinese capital stepped up security and Covid curbs, while steel mills in nearby Hebei province were instructed to cut back on operations to improve air quality, an industry source said.

The day after the congress ends, Xi is expected to introduce his new Politburo Standing Committee, a seven-person leadership team.

It will include the person who will replace Li Keqiang as premier when Li steps down from that post in March after serving the maximum two terms.

Video has emerged in recent days of Chinese students protesting against Xi Jinping’s abolition of term limits, with critics calling the move undemocratic.