When Aileen Barratt, 37, entered the world of dating apps in 2016 after her marriage broke down, she was shocked by the levels of sexism she found.

She learnt the hard way to read the subtle — or not so subtle — clues in a man’s profile that reveal what he really thinks of himself and women.

Here, for the uninitiated, she shares her brilliantly witty ‘translation’ of what men really mean, and whether to swipe right (for a match) or left (to reject) a potential suitor . . .

A is for Just Ask

Lazy men often put this in their ‘bio’. It means: ‘I never know what to put here, so just ask me what you want to know.’ But why would I spend time on someone who can’t think of anything interesting to say about themselves? This is a man who requires that you make all the effort.

B is for Banter

‘Banter’ used to mean a snappy conversational back and forth. But men who say a prospective partner ‘must have banter’ are rarely asking for someone funny. They want to be able to make ‘edgy’ (aka belittling or misogynist) statements and have you laugh because they’re obviously joking.

C is for Conversation

Conversation on a dating app can feel like a robotic exchange of niceties. The problem is making it a smug requirement, as in the request ‘must be able to hold a conversation’. It sets him up as an intellectual powerhouse — and it sets you up to do all the work.

D is for No Drama

This request is a big red flag, especially when it’s IN CAPITAL LETTERS. What these guys count as ‘drama’ is, for the most part, the natural progression of a relationship. Any desires or boundaries at all will be framed as needy. God forbid you admit to wanting more than shallow text exchanges, drinks and sex. Just swipe left.

Here, for the uninitiated, Aileen Barratt, 37, shares her brilliantly witty ‘translation’ of what men really mean, and whether to swipe right (for a match) or left (to reject) a potential suitor . . .

E is for Entrepreneur

There are a suspiciously large number of entrepreneurs on dating apps. This is the equivalent of being photographed next to a Maserati in white chinos. It could be accurate, but 99 per cent of the time it’s rubbish. Anyway, if being an entrepreneur is his whole personality, maybe he doesn’t have a personality.

F is for Fun

This was the first euphemism I noticed on Tinder. If men say they’re ‘looking for some fun’, it won’t be fairground rides and candy floss. Don’t get me wrong. Sex is fun! But casual sex often isn’t that much fun for a woman — especially when it’s not your fun they’re concerned with; it’s theirs.

G is for Good Vibes Only

A man who uses this harmful little phrase goes even further than the NO DRAMA types. Should you ever be less than totally thrilled by them, they’ll tell you it’s really hard when you’re like this because the negativity is really draining, you know? Ugh. Actual humans have range.

H is for Height

I can’t blame men for exaggerating their height, when pretty much every woman includes ‘tall’ in her list of requirements. I think it’s internalised misogyny that makes us feel we should be birdlike creatures and men should tower over us. Disney has a lot to answer for.

I is for Inked

He’s really saying: ‘I have tattoos. You can see this in literally all my pictures, but I am still mentioning them here because they are my entire personality.’

J is for Joke

Ah, the constant refrain of: ‘Chill out, it was just a joke.’ This man could be called ‘Schrodinger’s douchebag’; someone who makes an unacceptable — often sexual or prejudiced — remark and decides whether they were serious or ‘joking’ based on your reaction. 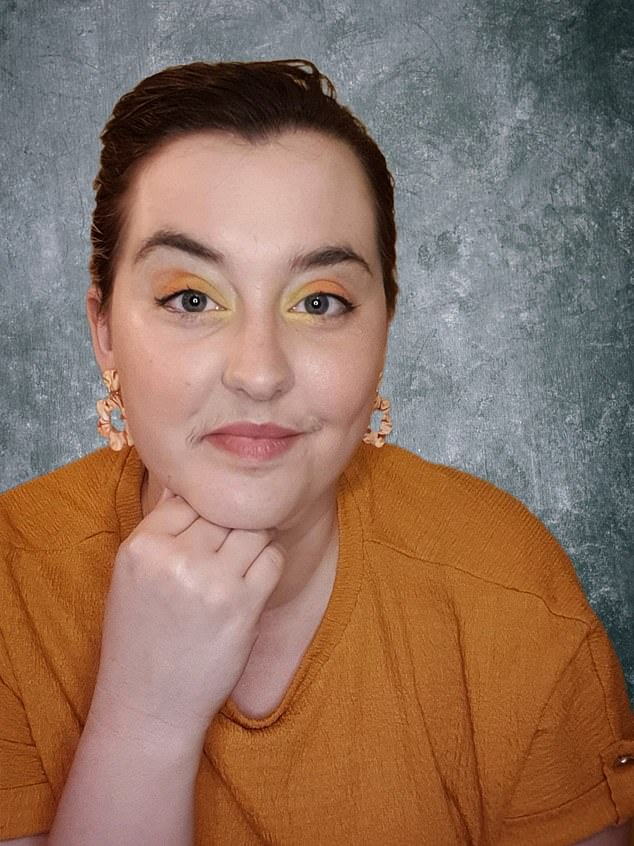 When Aileen (pictured) entered the world of dating apps in 2016 after her marriage broke down, she was shocked by the levels of sexism she found

K is for Kinky

Plenty of men are genuinely into consensual ‘kinky’ sex — which is great for women who are also into it. But a bloke putting ‘kinky’ in his Tinder bio may be one of a frightening number who think it’s OK to hurt women. Shockingly, in a survey among my Instagram community, 77 per cent of women said they had been subjected to a violent or degrading act without consent.

L is for Lone Wolf

If you are looking for a relationship, don’t match with a ‘lone wolf’. In reality, if a man is behaving like Mr Darcy at the beginning of Pride And Prejudice, it is unlikely he is smouldering with love for you.

M is for Married

N is for No Single Mums

Yes, there are valid reasons why someone would not want to date a person with kids. But there are no valid reasons to write ‘no single mums’ in your dating bio. It is a lazy assumption they will come with baggage (the kids) and ‘drama’ (the ex).

O is for Origins

Everyone is asked where they are from in a first conversation. But if you’re white, you’re much less likely to have the follow-up question: ‘No, but where are you from originally?’ It can quickly lead to some disturbing places.

This implies men believe their (masculine) pursuits are superior to your (feminine) interests, so they are in a position to hand out ‘bonus points’. For example, if you drink pints/are a gamer/don’t spend hours getting ready. Don’t give them the power.

Q is for Quiet

All too often a man’s opening gambit is a complaint. ‘Doesn’t anyone talk on here?’ ‘Why is it so quiet?’ These guys can’t see far enough past their own bruised egos to notice their attitude may be contributing to the lack of interest.

R is for Ruin My Life

I’ve seen plenty of men saying variations of ‘just looking for someone to ruin my life’. There’s nothing romantic about two people ruining each other’s lives. 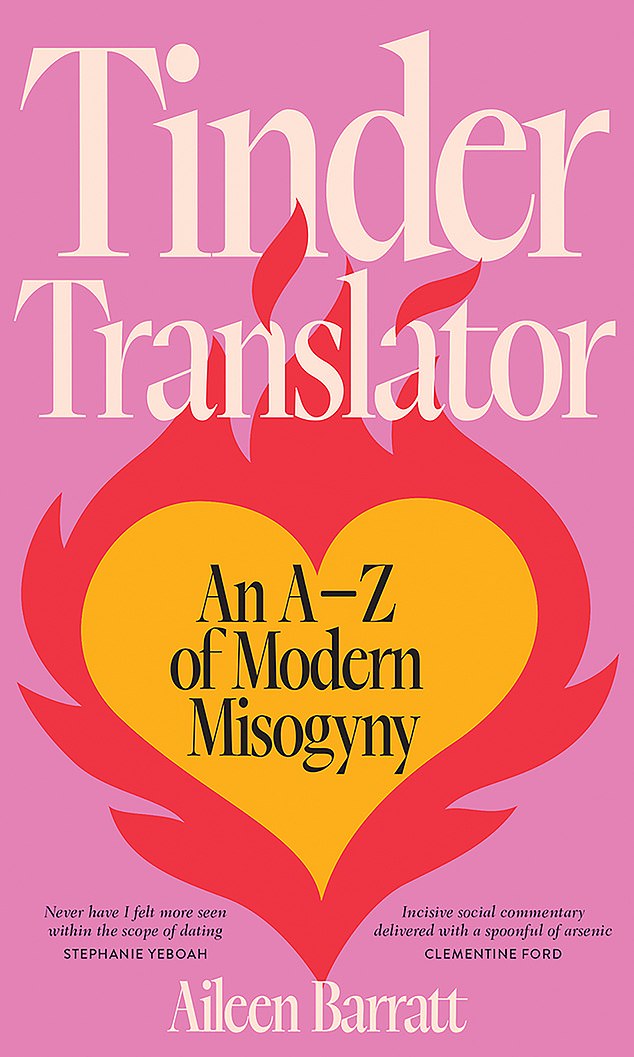 Tinder Translator: An A-Z Of Modern Misogyny, by Aileen Barratt, to be published by Hardie Grant next Thursday at £12.99

S is for See What Happens

I am suspicious of men who want to ‘see what happens’. All too often this is code for ‘looking to go on a few dates to see if sex happens’. Theoretically, these men may be open to having a girlfriend — but she is almost certainly not going to be you.

T is for Takes Care Of Themselves

Almost without exception ‘looking for someone who takes care of themselves’ is code for ‘no fatties’. Real self-care is the realisation you don’t want to be with someone whose affection is contingent on your appearance.

U is for No Users

This man is so entitled he thinks any woman who doesn’t sleep with him after he’s bought her dinner is a user. Generally, we women want to chat a bit before we make that decision. I know, crazy!

V is for Vanilla

Vanilla used to be a flavour of ice cream. Now it’s the new term for ‘frigid’ — a badge of shame for women who won’t engage in certain sex acts, most of which are painful or degrading.

W is for Where Are All The Normal Girls?

He means: ‘Where are all the passive and compliant women?’

X is for All My Exes Are Psychos

Nothing quite says ‘I hate women’ like a man who refers to all his previous partners as ‘psychos’. Yes, some men go through awful break-ups, but usually you find this out later. Healthy people don’t lead with: ‘My ex was nuts.’

Translation: ‘I’m not a big fan of women in general but you’re pretty nice and I expect you to take that as a compliment.’ Actually, I am like other girls, ta very much.

Z is for Zzzzzzzz

In conclusion, if you’re exhausted by wading through lies, half-truths and bizarre expectations — you can take a break. You might want a relationship, but if it’s making you miserable, you don’t need one.