This Leon roars! (and there’s vroom for ALL the family)

I prefer a KitKat (dark) to a Twix, and I prefer taramasalata to houmous. I prefer reading to watching telly, and I prefer almost anything to listening to people tell me why things can’t be done. Until Thursday, I was also forced to prefer going downstairs backwards as opposed to forwards. This is a standard post-marathon situation for most runners, including such legends as Paula Radcliffe!

It’s part of a condition referred to as DOMS – delayed onset muscle soreness – which sees temporary immobility below the waist worsen for at least 48 hours after whichever 26.2-mile course you’ve managed to haul your middle-aged bag of bones around. The only known cure? To sit or lie down for as long as possible. 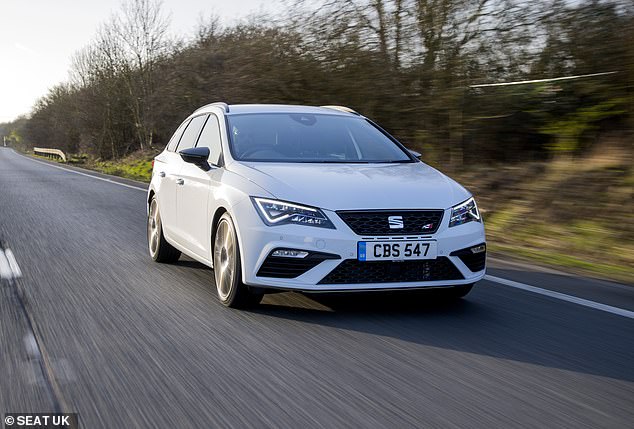 If you want an extremely feisty family estate car for circa £35k, you would be hard pushed to do better than the new Leon ST Cupra

Good news for Seat, as for most of last week, once I’d plonked myself in the driver’s seat of its new Leon ST Cupra, it was all I could do to get out again. What follows are the highlights of our nigh-on inseparable week together. Not that it started terribly well.

Why such an unambitious shape, Seat? Not so much a wolf in sheep’s clothing as a wolf in a cardigan, corduroys and sensible shoes. Especially for a car that springs from the same gene pool as the outrageous Honda Civic Type R, Ford Focus ST and all those other over-designed delinquents. But not the new Leon Cupra: no frills, no fancy grilles or spoilers. Nothing at all really. Perhaps Seat thinks stealth is the way forward. Like James Bond in a lounge suit.

But then the sun went down, and something amazing happened. A transformation. The Cupra is a night owl, instantly developing a whole new personality. A Subaru-style silhouette began to emerge, then shades of an Audi RS 6 rear end (courtesy of a pair of throbbing tailpipes and a hulking great rear diffuser), the new LED light clusters front and back shining throughout. ‘The new Cupra – more Dracula than a daytime Bobby Dazzler.’ Slap that on the bottom of all those expensive billboards, Seat.

Inside, it’s a bit more of a mishmash – though I’m not sure what of. The upholstery trim, textures and finishes aren’t half bad, but the new touchscreen nestles in between a pair of slightly old-fashioned-looking clunky air vents and a smattering of nondescript knobs, switches and buttons. The message being: ‘There is no message’ – which could not be further from the truth.

If you want an extremely feisty family estate car for circa £35k, you would be hard pushed to do better. The boot is plenty wide enough, albeit a bit shallow, plus with one simple tug the rear seat backs surrender themselves to reveal a vast storage space. If still more room is required, then perhaps a van might be a better option than a sizzling hot hatch with an enlarged bottom.

Talking of bottoms, there’s space enough for three adult tushes in the back, with head- and leg-room easily passing my brief but effective 6ft 2in instant torso test.

The rear trim is as attractive as that up front, featuring a carbon-fibre-style stitched material that looks so much like the real thing I had to stroke it to make sure it wasn’t.

All this, plus racy Alcantara seat inserts, suggests something sporty may be about to happen. Which it most certainly is. Although the 2.0-litre, four-cylinder engine sounds like any other refined petrol lump out there on start-up, select Cupra mode and that engine immediately changes its tune. You want a clue as to what’s in store? Check out the badge on the tailgate, the one with the chequered flag and the number 300 beneath it. The universal sign for a track car champing at the bit, underlined by the number of horses hiding under the bonnet.

Once unleashed, the rapid acceleration of engine rpm and rapid gear changes from the DSG gearbox produce a staggering level of performance. This really is an extremely quick machine – 0-60mph in 5.9 seconds is as serious as any car with room for Fido and the family ever needs to be. Even in Comfort mode, it is fast, furious, formidable and lots of other things beginning with ‘f’. My only bugbear is the size of the gear-change paddles. OK, smaller ones look neater, but they can be a faff to locate when giving it all the beans on twisting country lanes as the steering wheel whips first one way then the other.

Also, I don’t see the point of Sport. You can’t be a bit pregnant – either you are or you’re not. Ergo, if you fancy a blast, why would you pick this less-fruity mode over the super-juicy signature Cupra set-up? 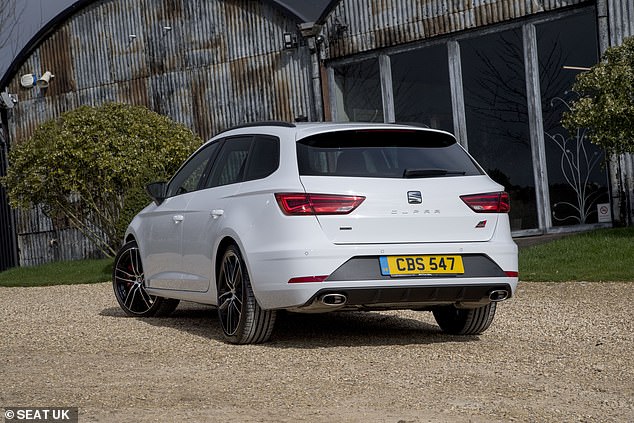 Seat claims fuel economy of about 40mpg, which, having kept half an eye on the gauge for the best part of a week, I would be hard pushed to disagree with

When it comes to handling, the Cupra remains perfectly poised and balanced, even under the most extreme acceleration and braking, regardless of the type of road surface. Yet it achieves this without making the driver feel as though they’ve been dealt out of the scenario. A bit like the sublime Golf R – of which the Leon ST Cupra is a not-too-distant cousin – you never feel like a bunch of computers are over-babysitting.

Other impressive observations noted: not once was there a shimmy of torque steer, and the superb 4Drive system keeps all four boots solidly planted, ensuring real confidence. The car feels well within its capability at all times and is relatively light, even with so much to boast about. A genuine lithe hot hatch.

Seat claims fuel economy of about 40mpg, which, having kept half an eye on the gauge for the best part of a week, I would be hard pushed to disagree with. All of which almost goes towards rendering my initial disappointment re the aesthetics meaningless. Or at least recategorised from flat, featureless and phlegmatic to confident and uncluttered.

What a difference a drive makes.