‘I was born to stand out’: This Morning viewers are left in tears by a redhead boy, 12, who wrote a poem to bullies who told him ‘being ginger is worse than cancer’

A boy who wrote a poem in response to bullies who picked on him for being ginger has left viewers ‘in tears’ after reading it out live on TV.

Alfie Coleiro, 12, from Eastbourne, East Sussex, was told to kill himself because ‘being ginger is worse than cancer’.

The youngster’s classy response was to a pen poem back to the bullies in which he told them he was ‘born to stand out’.

Alfie wowed viewers when he read the poem out live on ITV’s This Morning on Monday, who hailed him as ‘inspiring’, with one saying: ‘He should run the country!’.

Alfie Coleiro (pictured), 12, from Eastbourne, East Sussex, appeared on ITV’s This Morning on Monday to read out a poem he wrote to his bullies who picked on him for having ginger hair

The bullies used an anonymous messaging app to leave cruel messages about his red hair.

After Alfie wrote the emotional poem his father shared it on Facebook where it quickly received hundreds of shares.

He was interviewed by This Morning presenters Ruth Langsford and Eamonn Holmes alongside his mum Nyree where he was asked to read it to the nation.

In the poem he describes the bullies as ‘so so cruel’ and asks, ‘are you really like this?…Have you not got anything better to do?’

This Morning viewers took to Twitter to praise Alfie’s bravery (pictured) at reading out the poem live on national TV, with one tweeting: ‘Crying listening to Alfie’s poem’

‘Just because I am ginger,

‘You’re so so cruel,

‘Have you not got anything better to do?

‘Or are you gonna treat me like gum on the bottom of your shoe?

‘You’re an idiot – you have made me cry,

‘But that’s not the case,

‘Not even my home is my safe place,

‘It’s like I’m stuck in some sort of trap,

‘I make people happy and people fake their smiles,

‘I’ve got love and support,

‘Just please own up,

‘So you sit behind a screen,

‘But I’m gonna carry on with life,

‘Do what I wanna do,

‘So I’m not gonna sit there, cry and freak out,

‘But without a doubt,

‘I’m not gonna blend in,

‘WHEN I WAS BORN TO STAND OUT.’

Alfie said: ‘I’m not gonna sit there, cry and freak out,But without a doubt,

‘I’m not gonna blend in. WHEN I WAS BORN TO STAND OUT.’

The poem left viewers ‘in tears’ as many took to Twitter to praise his bravery at standing up to the bullies.

One tweeted: ‘Crying listening to Alfie’s poem. He’s the cutest little thing and so intelligent. I love how he dealt with the whole situation. Inspiring.’

‘Alfie seems like the sweetest child ever! Being ginger is awesome,’ another posted.

A third said: ‘So heartbreaking this kid is being bullied all because he’s ginger! He’s adorable!! Nothing wrong with him.’

Another wrote: ‘Little Alfie is such a beautiful boy. Well done Alfie in speaking out & standing up to the bullies.’

Alfie revealed that the bullying has now stopped but he still doesn’t know who was behind the messages.

Alfie’s mother Nyree said it was ‘heartbreaking’ to see her son go through his ordeal.

She admitted she became emotional when she heard the poem for the first time.

‘When he gave me that I cried because it was all of his emotions and how he felt written down.’

Alfie also shared a message to any other redhead children who may have been bullied because of their hair.

He added: ‘Don’t hide it, being ginger isn’t a bad thing, it’s the same as everyone.

‘Everyone’s just as equal as everyone.

‘If you do have hard times don’t keep it to yourself, tell someone.’ 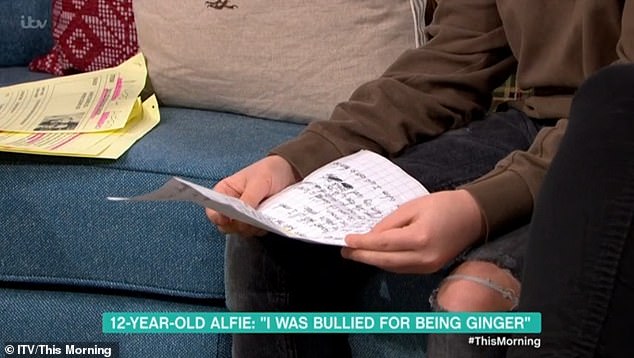 After Alfie wrote the emotional poem his father shared it on Facebook where it quickly received hundreds of shares. Pictured: Alfie reads out the poem on This Morning 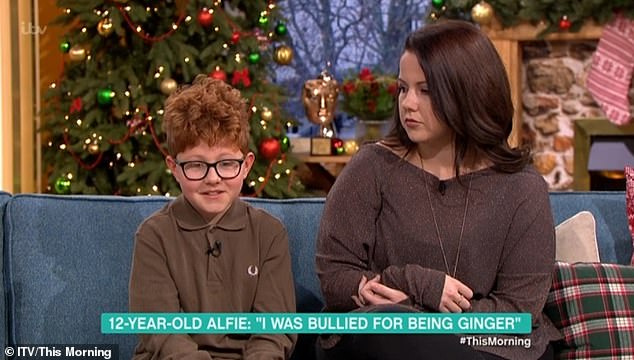 Alfie’s mother Nyree said it was ‘heartbreaking’ to see her son go through his ordeal. Pictured: Alfie (left) and his mother Nyree (right) on This Morning on Monday