This ‘time capsule’ 1930s Bugatti is set to sell for £3million

This barely-used 1930s Art Deco Bugatti is heading to auction later this month and is tipped to fetch a staggering £3million.

The black and yellow 1938 Type 57C Atalante is said to be the ‘rarest’ and ‘most sought-after’ example of Bugatti’s golden-age supercar, described as being in ‘time capsule’ condition having been preserved for most of its life.

That’s because it was hidden away from the beginning of the Second World War for safe keeping and then kept as a ‘sleeping beauty’ by an eccentric French recluse at his chateau for decades.

Concealed classic: This 1939 Bugatti has been kept in storage for the best part of 60 years. It will be offered at public sale for the first time later this month, with the auction house predicted a sale figure close to £3million

The jaw-dropping Type 57 – chassis 57767 – is one of three supercharged examples Bugatti produced and cloaked in streamlined Atalante bodywork made of feather-light aluminium.

The car in question was used by the French supercar-maker in 1938 as its display showpiece for the Paris Salon event.

It was delivered to the first keeper in December that year but quickly ran into some reliability issues.

Letters sold with the car show that it was sent to a Bugatti workshop in a Parisian suburb on 30 August 1939 to undergo repairs to resolve a camshaft lubrication problem.

Just two days later, Hitler invaded Poland and the car was squirreled away for safe keeping by Bugatti – and it has remained largely out of the public eye since. 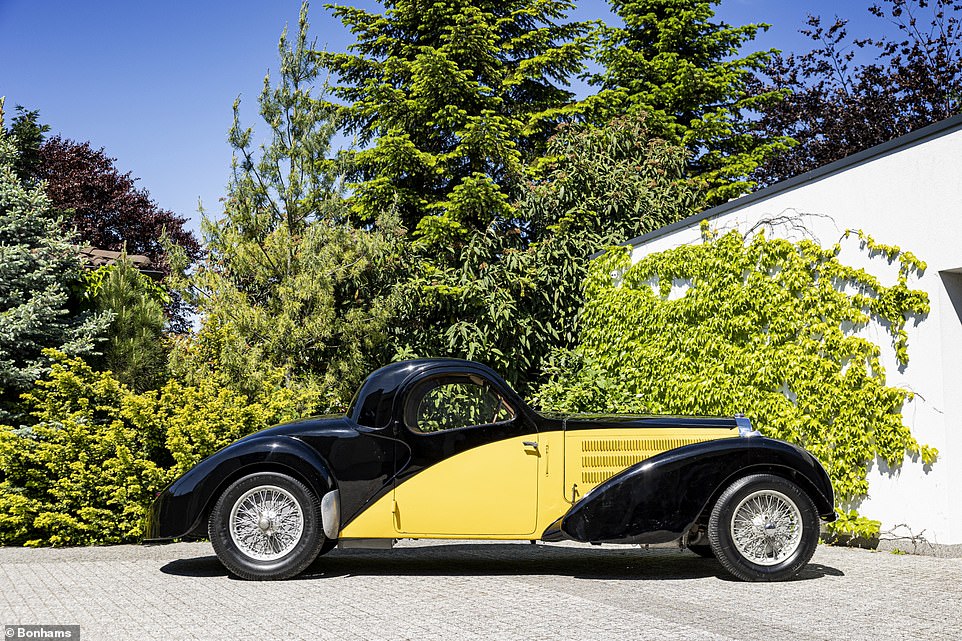 Just three Type 57 Bugattis left the factory with a three supercharged engine and the streamlined Atalante bodywork made of feather-light aluminium. Chassis 57767 is one of them 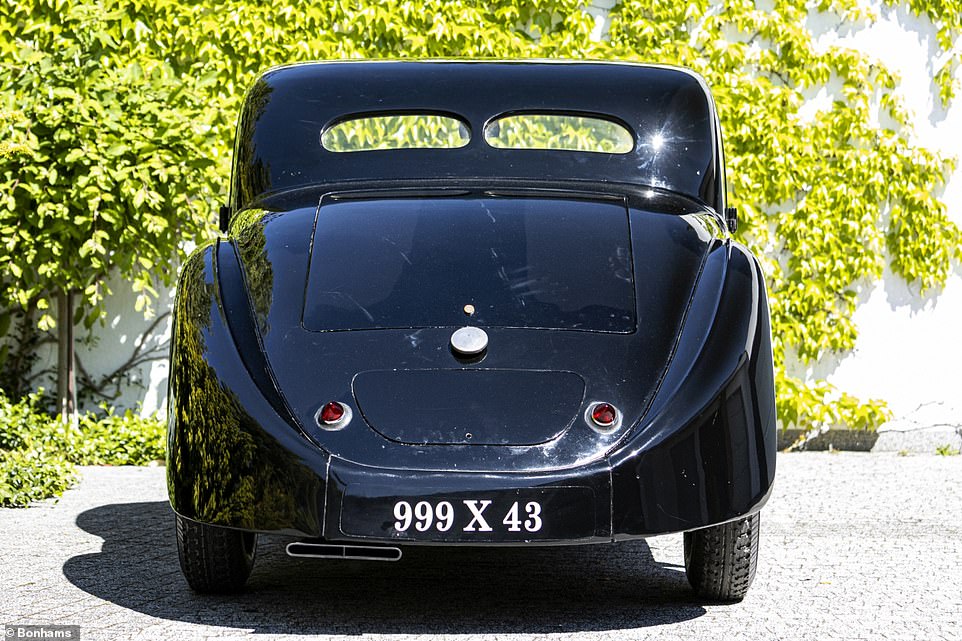 The Type 57 was the French brand’s golden-era supercar. This one was used as a display showpiece for the 1938 Paris Salon event 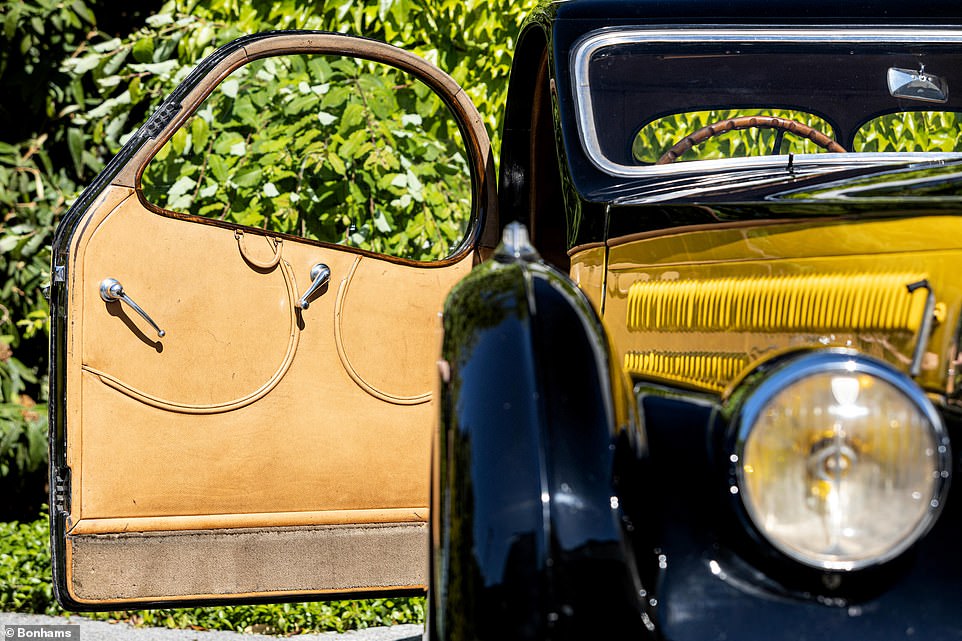 The first owner took delivery in December 1938, but a year later Bugatti was forced to put it into storage for safe-keeping as the Second World War broke out

It was bought by the previous owner, Jean Piger, in 1954, who drove it extensively for the first few years before wheeling the cherished motor into a heated garage at his chateau in a private car collection alongside a Mercedes 300SL and a Jaguar E-type.

Having not turned a wheel for the best part of six decades, Mr Piger – who had become a recluse -agreed to part with the Bugatti in 2014, though insisted that potential buyers would not be allowed to visit his home to inspect it before purchase.

Shortly after buying the beautiful vehicle, the vendor – who Bonhams say is an ‘esteemed European collector’ – sent it to French Bugatti specialist, Ets Randoni, to be re-commissioned mechanically in order to pass France’s version of the MOT so it could be driven on the road once again.

The 57C is now being offered for sale via public auction for the very first time.

Bonhams says it will be the ‘showstopper’ of its Quail Auction in California, which takes place on 19 August in Carmel. 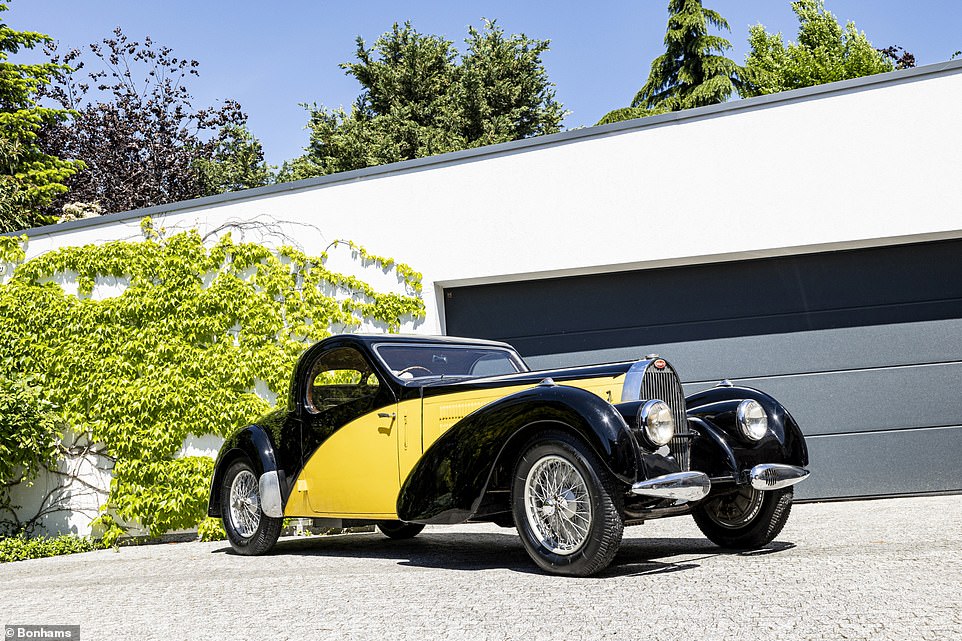 The Bugatti was returned to its first owner after the war before being sold to previous owner, Jean Piger, in 1954 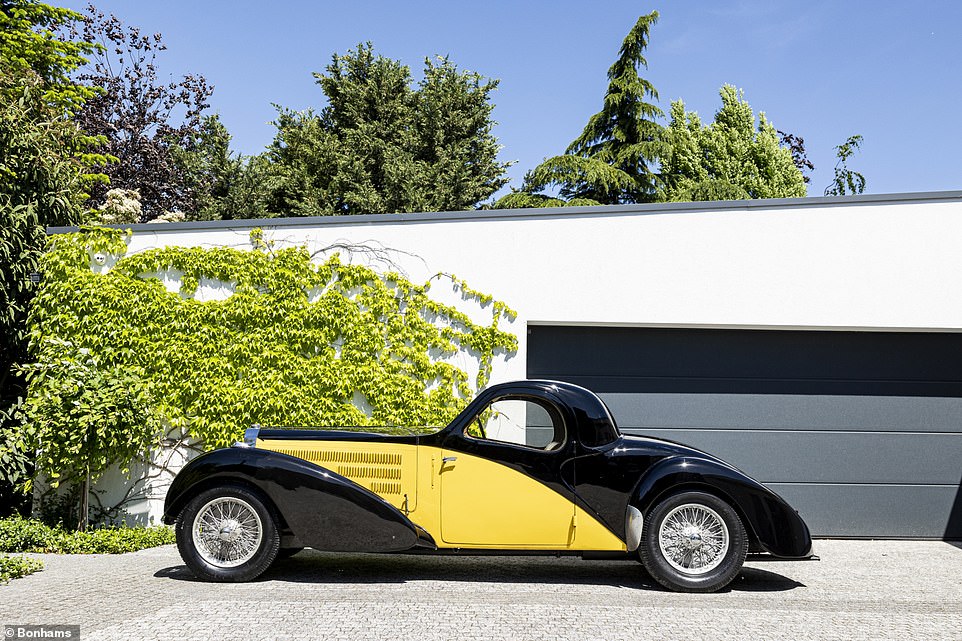 Mr Piger drove the stunning motor extensively for the first few years before wheeling it into a heated garage at his chateau in a private car collection alongside a Mercedes 300SL and a Jaguar E-type. He remained there for the best part of 60 years 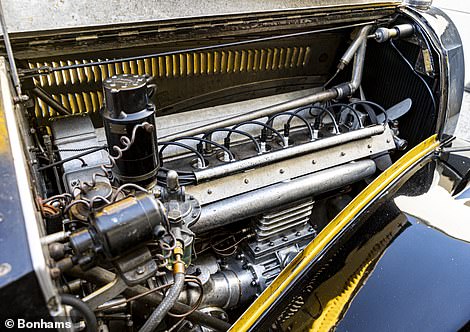 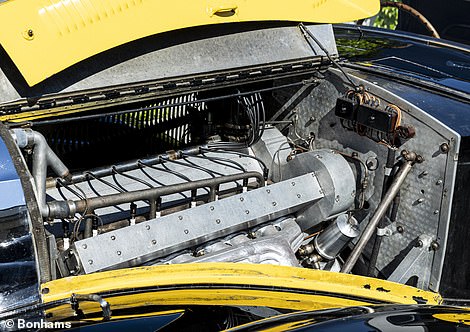 The 3.3-litre eight-cylinder engine when new produced 160bhp, making it one of the most powerful supercars of its generation. Linked to a four-speed manual gearbox, it was capable of a top speed of 120mph, which in 1938 was almost unfathomable when most vehicles of the era could barely top 50mph

The auction house has predicted it will sell for a figure between $2.8million (£2.3million) to $3.4million (£2.8million), though it could easily exceed the higher estimate.

Almost entirely original, it retains its Havana leather interior and 3.3-litre eight-cylinder engine producing 160bhp, making it one of the most powerful supercars of its generation.

Linked to a four-speed manual gearbox, when new it was capable of a top speed of 120mph, which in 1938 was almost unfathomable when most vehicles of the era could barely top 50mph.

The yellow paint was an addition during Mr Piger’s tenure, though the black is believed to be the same coating from the factory. 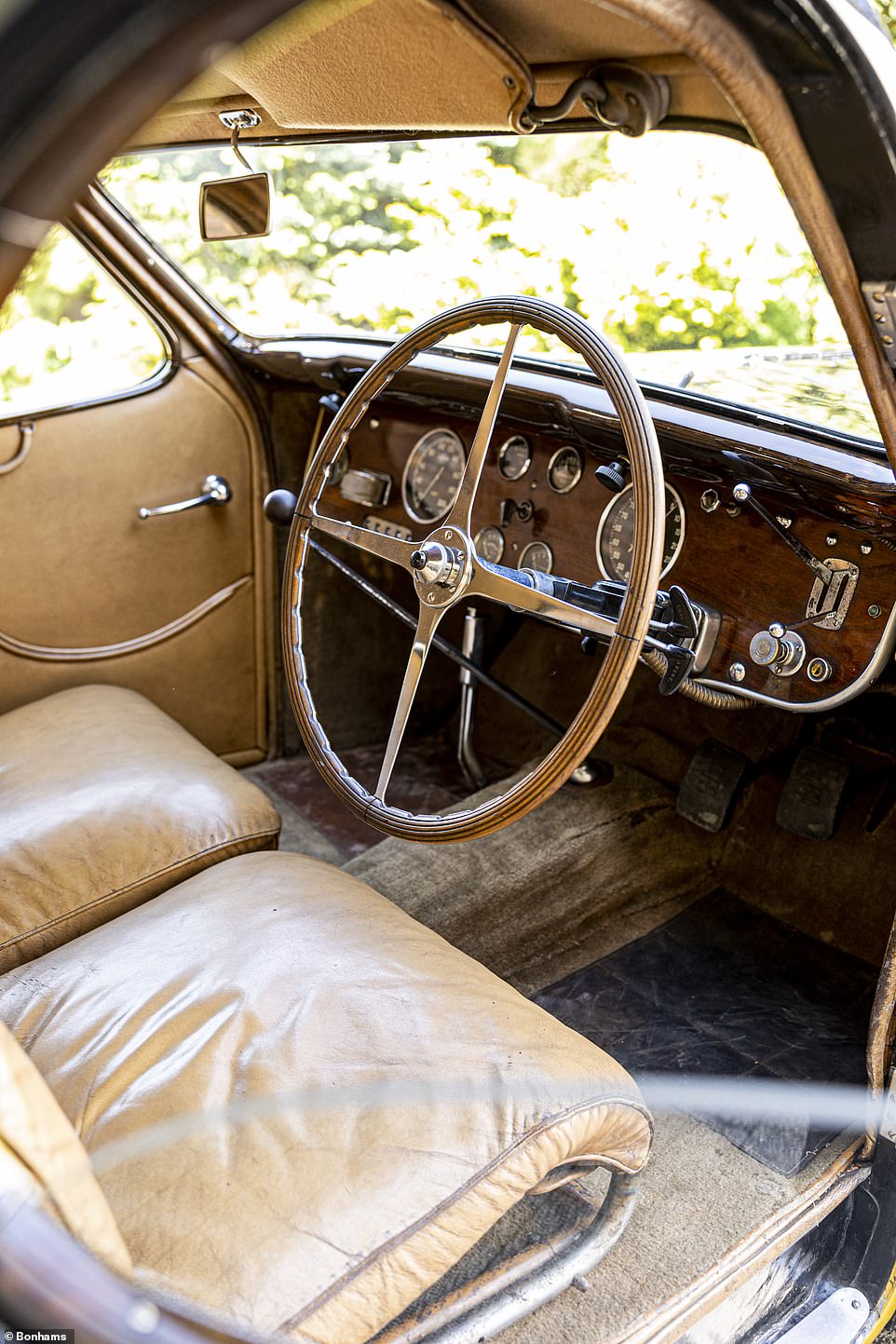 The Havana leather interior is claimed to be completely original. The car has had a mild restoration since it last changed hands in 2014 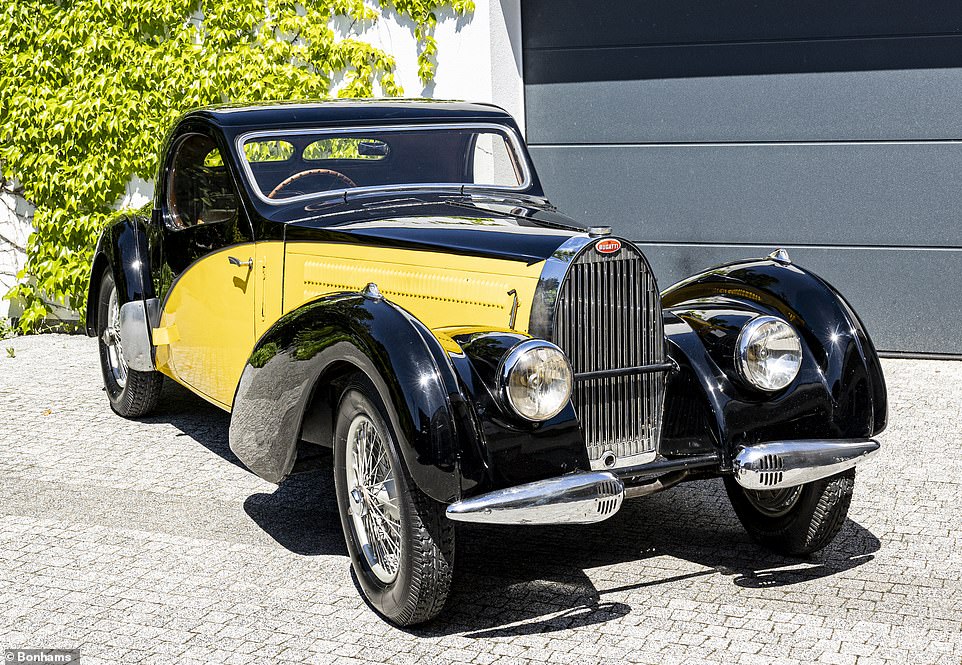 Bonhams says it will be the ‘showstopper’ of its Quail Auction in California, which takes place on 19 August in Carmel 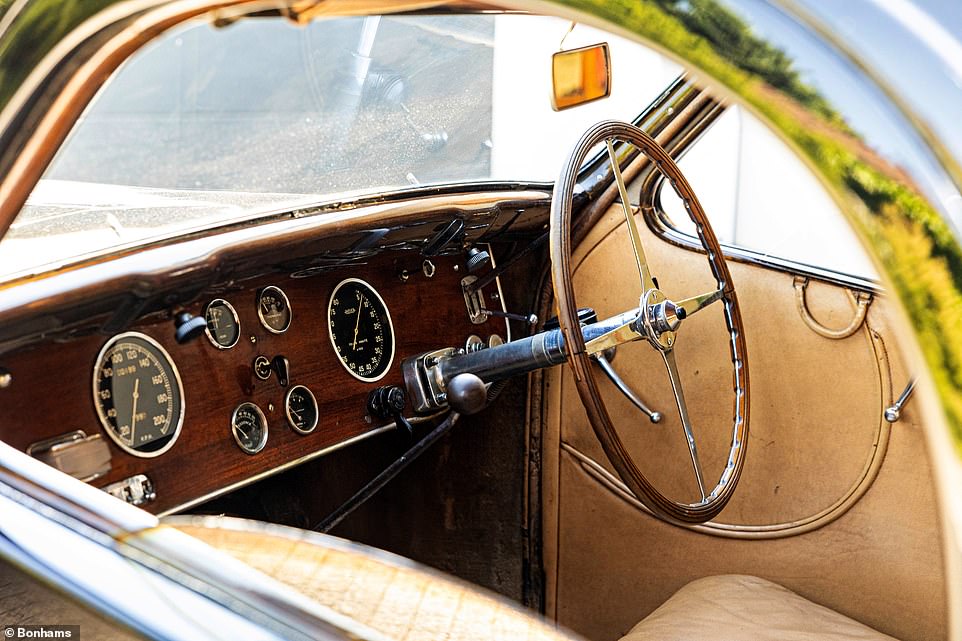 ‘Speed, style, exclusivity, originality and provenance: this particular jewel has it all,’ Bonhams said.

‘To call something unrepeatable is a hackneyed phrase, but it is safe to say that this car is unique in terms of its deep provenance, history, and authenticity,’ it went on.

‘Not only was chassis 57767 built to the rarest of Atalante specifications. In addition, of the surviving Atalantes, no other car has retained its originality to such a degree, nor been owned by the same person for sixty years.

‘It will stand out in any collection and be welcome at any of the world’s foremost concours events.’

Jakob Greisen, its head of motoring in the US, added: ‘Art deco Bugattis are no strangers to Monterey Car Week but we are delighted to be offering this jewel of a car – which is the perfect headliner for our 25th anniversary sale.’