Thomas Cook launches lie-flat seats in ECONOMY: Passengers can now pay £200 on top of their ticket price for a mattress that stretches across an entire row

Passengers can now enjoy relaxing on a lie-flat seat on board Thomas Cook Airlines – in economy.

The UK-based carrier is launching a ‘sleeper seat’ on its long-haul routes on its Airbus A330 aircraft. It will be available for a supplementary price on flights from May 13.

The seat is transformed by passengers buying a ‘comfy’ mattress that slots across a row of three seats tucked away at the back of the aircraft. 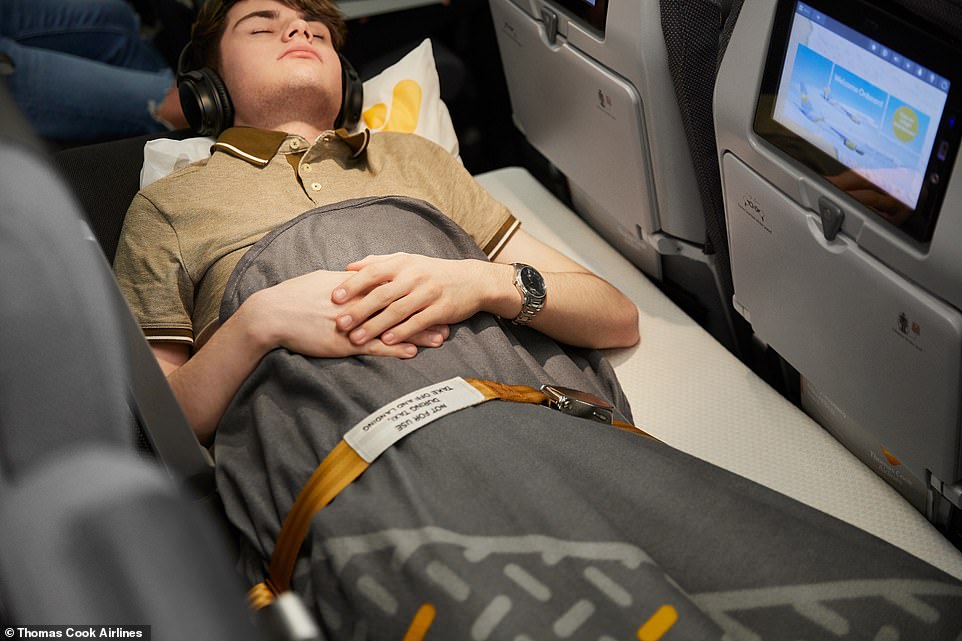 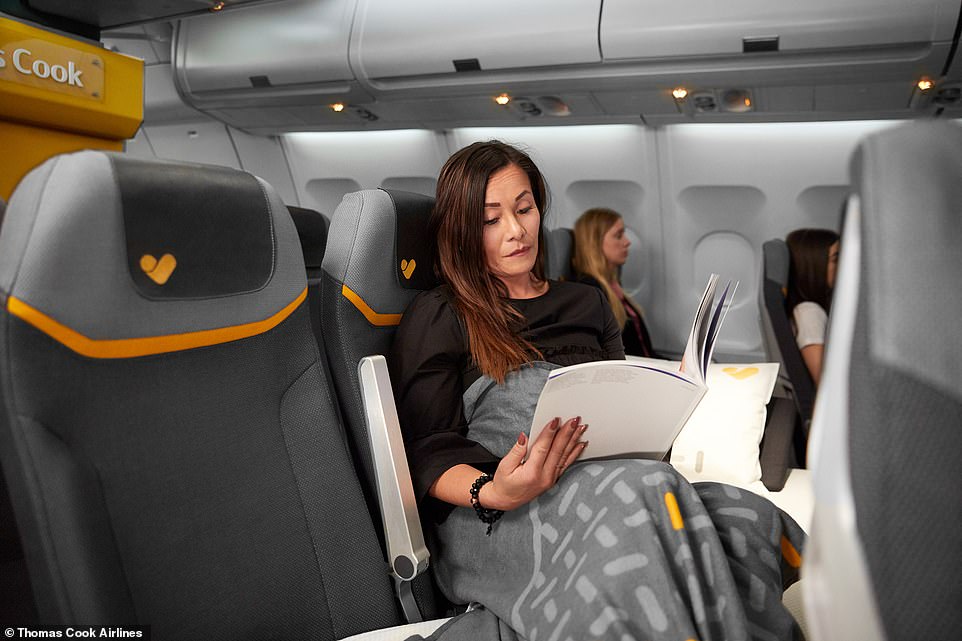 Once the arm rests are pushed up, passengers can lie across the row to either sleep, read or watch the in-flight entertainment.

The sleeper seats, which are 148.4cm long and 67cm deep, are on sale now and have to be booked before travel, with reservation prices starting from £200 one-way once a single standard economy ticket has been purchased.

Clearly then, it’s cheaper to buy a sleeper seat than three separate economy tickets, but there are only four available per flight.

Other routes the seats are available on include San Francisco, Orlando and Cancun. 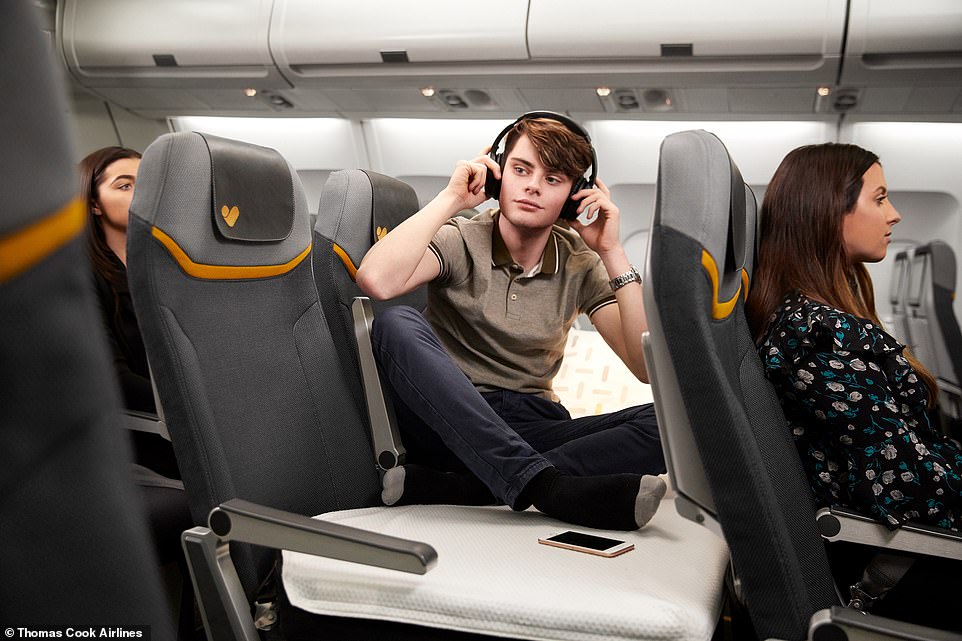 The sleeper seats, which are 148.4cm long and 67 cm deep, have to be booked before travel and prices start from £200 one-way. They are on sale now 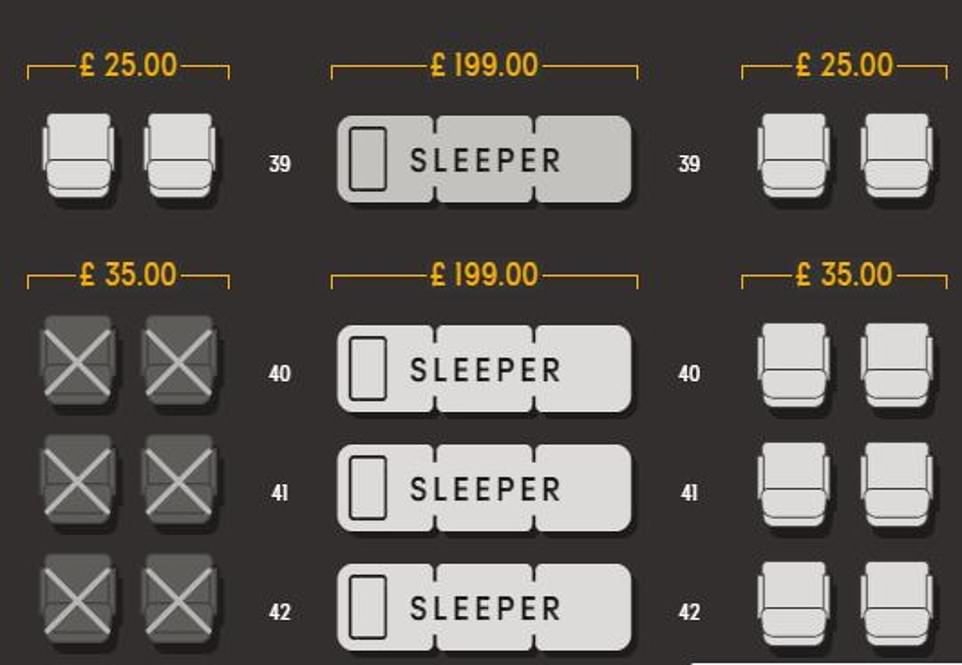 Travellers can request the cabin crew to transform the row into a bed once the seat belt signs have come off after take-off.

All sleeper seats also come with a fitted sheet, a head rest, a pillow, a blanket and an amenity kit. An extension seat belt is also available for those who want to lie down but stay buckled up.

The other plus point, of course, is that before and after the bed is made up, you get a whole row to yourself.

If passengers have ordered an in-flight meal, cabin crew will only transform the seats into a bed once the dinner service is over.

The seat is available for adults and children aged 12 and over.

Henry Sunley, commercial director at Thomas Cook Airlines, said: ‘We always look for ways to innovate for our customers and sleeper seat is a UK first that we are really proud of.

‘It is a fantastic way to transform your flying experience and enjoy some extra comfort when flying in economy.

‘It’s flexible too, as while only one person can use sleeper seat at a time, you can swap with other people in your group during the flight… but it’s entirely up to you if you want to share.’

Cabin crew will set up your Sleeper Seat during the flight. They’ll install special cushions which will transform your seats into a comfy place to rest. You’ll be provided with a pillow, blanket and fitted sheet as well as an amenity kit. There is also an extension seat belt, which you should fasten when lying down.

2. Where are the Sleeper Seat rows located?

Sleeper Seats are located at the rear of Thomas Cook’s Airbus A330 aircraft. But not on flights to and from Cuba.

3. Do I have to share the Sleeper Seat with a stranger?

No, when you book the Sleeper Seat, you get the entire row to yourself.

4. Do I have to use a seat belt when lying down or sleeping?

Yes. Cabin crew will give you an extension seat belt for comfort and safety when lying down or sleeping. And, as usual, you must fasten your seat belt when the pilot switches on the seat belt lights.

5. I’m travelling with my family. Can we share the Sleeper Seat?

No. You must be over 12 years old to use Sleeper Seat. And only one person at a time can use it.