Thomas Cook rivals Tui and Jet2 see shares spike as world’s oldest holiday firm topples into liquidation, but On The Beach warns collapse will be costly

Two of Thomas Cook’s biggest rivals saw their shares spike by 7 per cent in early trading on Monday as investors hurried to cash in on the catastrophic collapse of the world’s oldest travel firm.

Likewise, shares in Jet2 owner Dart Group jumped to £9.28, as investors assumed the competitors will pick up a large portion of Thomas Cook’s holiday traffic in the future. They closed 6.1 per cent higher at £8.97.

Airlines Ryanair, EasyJet and British Airways owner IAG were all trading higher too.

‘Airlines should feel the benefit from the abrupt loss of short haul capacity,’ Neil Wilson from Markets.com explained. 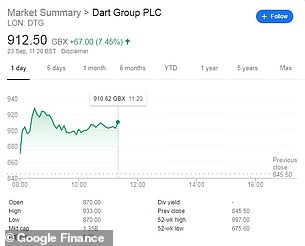 Thomas Cook ceased trading overnight after failing to secure the £200million it desperately needed for a bailout.

SpreadEx analyst Connor Campbell said: ‘Such a tragic collapse – one, if not solely brought about by Brexit, then certainly hastened by that ongoing mess – leaves plenty of money on the table for its sector peers, a fact that hasn’t gone unnoticed by investors.’

‘Now that Thomas Cook are out of the picture, it is likely to remove some of the pressure from the companies that are still in operation as fewer competitors should equate to healthier margins.’

It’s not all positive for listed firms in the holiday sector, however.

And insurance firms ‘are already reeling from the bill that could potentially head their way’, said Fiona Cincotta from City Index. RSA Insurance, Prudential and high street banks all trading lower on Monday.

‘Removing Thomas Cook from the holiday equation will see increased demand for other holiday companies and sadly that could result in higher prices for consumers,’ he said. 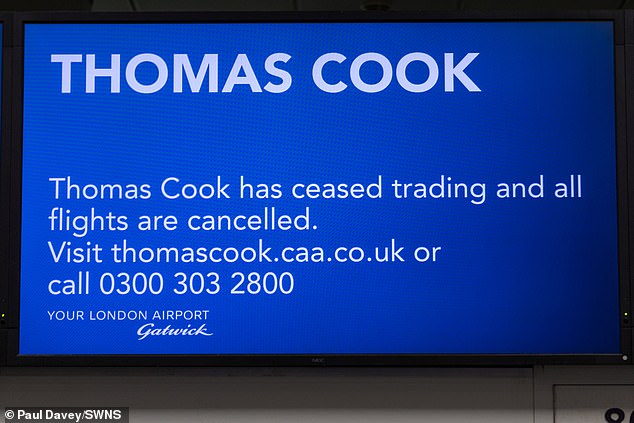 Since 2008, Thomas Cook has struggled to adapt to a changing travel and retail environment

Before Thomas Cook collapsed and its shares cancelled, the stock was trading 90 per cent lower following a string of profit warnings and fears that it was beginning to buckle under the weight of its debt.

Its slogan ‘Don’t just book it Thomas Cook it’ was familiar to many people who grew up in the 1980’s and was symbolic of the package holiday boom that took off around that time.

However, since 2008 the company, which also has 600 high street shops, has struggled to adapt to a changing travel and retail environment. 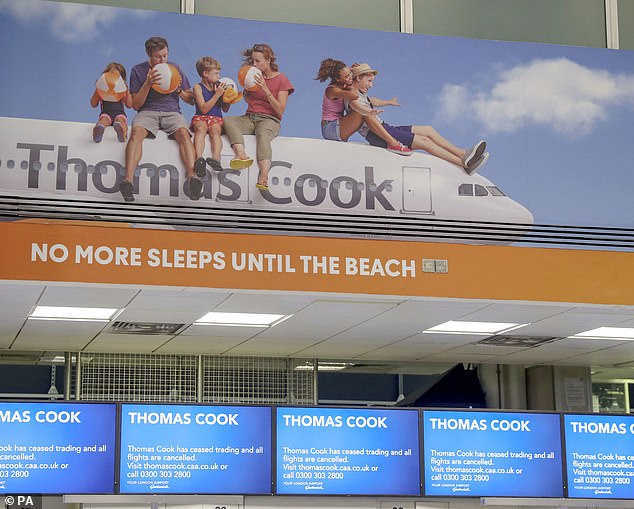 ‘The growing popularity of the pick and mix type of travel that allows consumers to book their holiday packages separately as well as new kids on the block like AirBnB, has seen the travel industry change beyond all recognition in the past decade, as consumers book travel, accommodation, and car hire independently,’ said CMC’s Michael Hewson.

Thomas Cook is not the only victim of overcapacity in the holiday sector, with the collapse a string of airlines in the past few years – the most profile casualty being Monarch two years ago.