MATT BARLOW: Thomas Tuchel was going mad about a refereeing decision late on but the real source of his frustration is failing to put away a Manchester United side managed by a caretaker crew

Thomas Tuchel was quite literally hopping mad. Leaping up and down on the touchline, both hands fixed to the top of his head in utter astonishment and moving through the complete Basil Fawlty repertoire.

The game was in stoppage time and the officials were the focus of his fury, having failed to spot Cristiano Ronaldo a yard offside, allowing play to go on and forcing Chelsea to defend a series of set-pieces and resist pressure when they really wanted to be at the other end searching for a winner.

It took a yellow card from referee Anthony Taylor to tranquilise Tuchel and, in fact, the home side were able to repel the late threat from Manchester United and create the final chance of the game.

Thomas Tuchel showed his fury on the touchline, falling to his knees at a refereeing decision 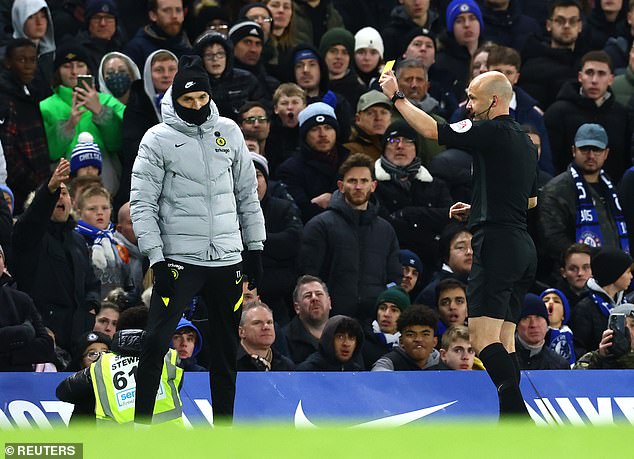 A very presentable one it was too, falling to Antonio Rudiger who launched it on the volley high over David de Gea’s goal and several rows back into the Matthew Harding Stand, where it was received with another groan of despair.

It was the 23rd and final attempt of the day by Chelsea and here lay the true source of Tuchel’s frustration, the failure to clinch all three points against a team in suspended animation, managed by a caretaker crew with an interim boss hovering in the wings and Cristiano Ronaldo simmering on the bench for an hour.

Manchester United at Stamford Bridge were better than they were at Watford on their previous Premier League outing, the final dismal act under Ole Gunnar Solskjaer.

They were more compact, more resilient with added bite thanks to an extra man in midfield but Chelsea would have won the game with room to spare had they been more clinical.

This was clearly the feeling inside Stamford Bridge. A disappointed sigh rippled around as the final whistle declared it a draw. Two points dropped, that was the feeling, a far cry from the jubilation five days earlier when Tuchel plotted the four-goal demolition of Juventus in the Champions League. 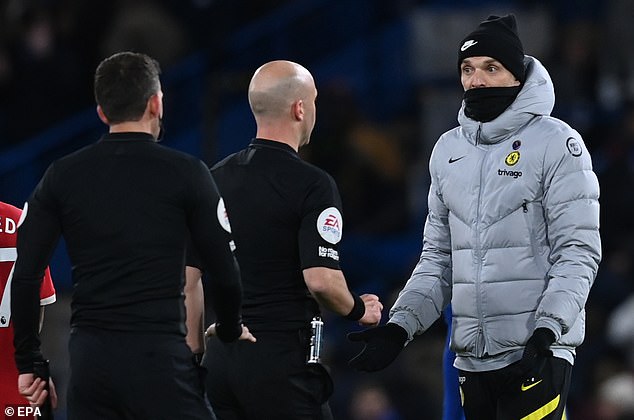 Momentum will ebb and flow. Confidence is tested and Chelsea’s head coach was in prescient mood as he forewarned of such an eventuality in his programme notes.

‘Sometimes you’re in a good place and things seem to be a bit easier,’ wrote Tuchel. ‘Other times it can also happen that things are a bit harder. You have to adapt and the most important thing is that you are free to do that and you don’t get nervous or frustrated.’

But nerves did take hold inside the Bridge once Jadon Sancho gave United the lead. For all the giddy talk about tactical revolutions, one punt high into the sky by Bruno Fernandes followed by a poor decision and a terrible touch by Jorginho changed everything.

Another ripple of unease went around the stands when Timo Werner fired a wonderful chance to level wide.

Werner scored the fourth coming off the bench against Juventus and his reward was to lead the line against United but this was simply a reminder that he is not a cold-eyed assassin in front of goal, rather than the start of a glorious run of form. 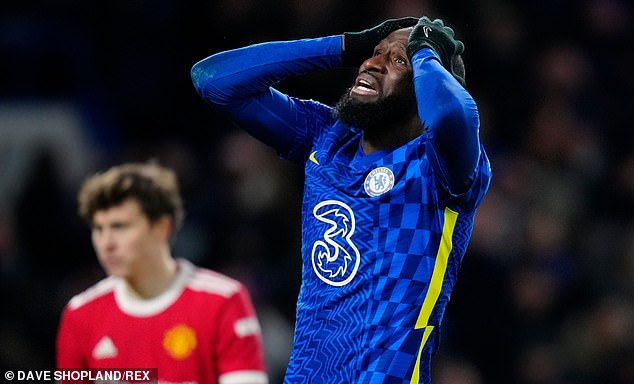 ‘He hasn’t played for a long time,’ said Tuchel in his defence. ‘We cannot expect him to be at his absolute peak. He looked very sharp in training, and that’s why I went with my gut and put him on from the start. We thought he could be decisive but it was not easy for him and we can see he lacks games.’

Werner was not the only culprit. Chelsea were generally wasteful. They could have scored twice in the opening three minutes when De Gea foiled Hakim Ziyech and Callum Hudson-Odoi.

Rudiger rattled the bar from long-range and they needed a most generous penalty decision to equalise.

Jorginho deserves credit for converting so coolly after his slip. Tuchel, too, had recovered his composure by the time he shared his thoughts on the game but Chelsea felt short-changed.

The lead at the top is down to a point with Liverpool and Manchester City in pursuit and know they must win the games they dominate.