Scream if you want to… charge your phone.

Thanks to the wonders of science, riders on Thorpe Park’s new attraction, The Walking Dead, can now power their smartphones by screaming loudly. That’s because there are devices on it that ‘harvest kinetic energy’.

The Surrey theme park conducted research that showed that millennials’ biggest fear is their phones running out of battery, so the device should prove popular.

Singer Kimberly Wyatt and model Max Rogers try out the new The Walking Dead: The Ride at Thorpe Park. The roller coaster will use the screams from guests in order to power their mobile phones

All of the Walking Dead’s carriages have been fitted with the harvesting devices, which not only suck up the energy of screams, but that from g-force and vibrations, too.

The units are then removed from the carriages by staff and deposited into an on-site mobile charging point.

Thorpe Park said: ‘If thrill-seekers are brave enough to open their eyes, they will see a set of LED lights in blood red powering up as guests’ screams become louder… throughout the spine-tingling 90-second experience.’

The 188mm x 188mm x 67mm device is jet black, ‘blending into its dark and mysterious surroundings on the roller coaster themed around the global TV phenomenon’.

Designed and installed by researchers at Queen Mary University London and the engineering team at Thorpe Park Resort, the technology took three months to implement, from design to installation. 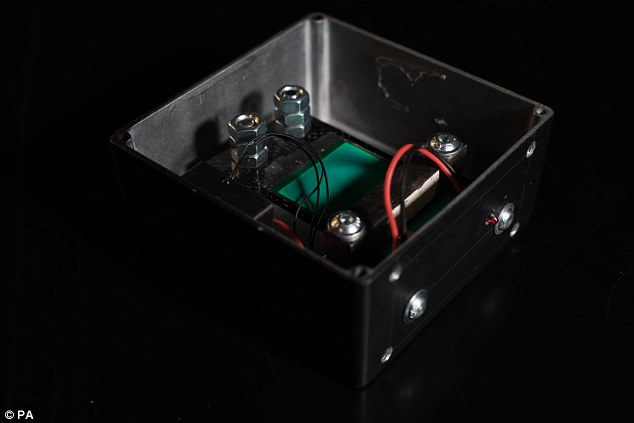 The screamometer part of The Walking Dead: The Ride. All of the ride’s carriages have been fitted with devices that contain kinetic energy harvesting technology

It will be available at the theme park for an initial trial period. If this proves successful, the technology may become a permanent fixture for the remainder of the 2018 season.

Thorpe Park Resort’s John Burton, who came up with the ride concept, said: ‘The Walking Dead: The Ride is 15 out of 10 on the scare factor scale, so it makes sense to be able to combine and harness our visitors’ screams and the ride’s vibrations to help solve a problem each and every one of us faces – losing the charge on our mobiles when we’re on a day out.’

Dr Joe Briscoe, School of Engineering and Materials Science at Queen Mary University of London, added: ‘Using vibrations and movement from The Walking Dead: The Ride has allowed us to harness the stray energy that is all around us.

‘This is an exciting concept that will undoubtedly be used more frequently in the future. The system uses a mini energy harvester to capture the kinetic energy, transferring it to a separate electrical circuit and storage unit, which is enough to charge a mobile phone.’

Alongside a lack of mobile phone charge, other top fears of young people include sounding stupid at work or university (34 per cent), not getting any likes for a social post (29 per cent), unexpected overdraft fees (28 per cent) and finding a grey hair (17 per cent).

Thorpe Park’s divisional director, Dominic Jones explained: ‘In launching The Walking Dead: The Ride we want to ensure our guests are offered something they can’t get anywhere else.

‘Our new and exclusive immersive experience is hands down one of the most thrilling, terrifying and now intelligent on offer in the UK. Being chased by walkers is guaranteed to be quite literally spine-chilling.

‘We can’t wait to leave our guests powered up for the rest of The Year of The Walking Dead, series of unmissable events for 2018.’