Thousands could die if normal care is shut down during second wave, leading medics warn

Tens of thousands of patients may die if the NHS shuts down normal care during a second coronavirus wave, leading medics warned today.

Health service bosses are being urged not to leave non-virus patients ‘stranded and in pain’ once again after cancelling millions of appointments during the first epidemic.

In early March the NHS told hospitals to scrap as many operations as possible and turf out patients on their wards to make way for an influx of Covid-19 patients.

The move was successful and hospitals were not overwhelmed by the effects of the virus but thousands of patients died from missing out on treatment as a result.

Official figures show that 12,000 more people than average died in England during lockdown from illnesses unrelated to Covid, including heart attacks and strokes.

Cancer charities fear tens of thousands more patients will die in the next year because they had their tumours diagnosed too late or missed completely.

Professor Neil Mortensen, president of the Royal College of Surgeons of England, said the NHS ‘must never again be a Covid-only service’.

He told the Guardian: ‘There is a duty to the thousands of patients waiting in need and in pain to make sure they can be treated.’

It comes amid reports that NHS England has scrapped its £400million-a-month deal with private hospitals to keep their beds in reserve in case of a virus resurgence.

The move will fuel fears that the health service is under-prepared for a second epidemic, which many experts have expressed concern about in recent months. 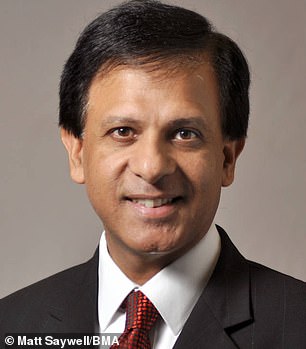 Dr Nagpaul told the newspaper: ‘We cannot have a situation in which patients are unable to access diagnostic tests, clinic appointments and treatment which they urgently need and are simply left stranded.

‘If someone needs care – for example for cancer, heart trouble, a breathing condition or a neurological problem – they must get it when they need it.

More than 120,000 Britons could die from Covid-19 in hospital this winter, ministers have been warned.

Leading academics were asked to predict a ‘reasonable worst-case scenario’ of how a second wave of coronavirus could hit Britain by Number 10’s chief scientist Sir Patrick Vallance.

The group — from the Academy of Medical Sciences — found 3,000 people may die every day in hospitals during the worst of the outbreak in December and January.

They modelled what would happen if the UK’s R rate – the average number of people each Covid-19 patient infects — climbed to 1.7.

Data suggested 119,900 Covid-infected patients would die in NHS hospitals between September and next June, if the virus sees a resurgence this winter.

But the report did not look at care home deaths, which have accounted for a third of the near-45,000 lab-confirmed coronavirus deaths so far.

The group of 37 experts behind the report said the combination of Covid-19 and flu, as well as a huge backlog of patients on waiting lists, could overwhelm the NHS.

And the academics called for urgent action, saying now presents a ‘critical window’ to help us prepare for ‘the worst that winter can throw at us’.

‘While not publicised in the daily briefings, these [12,000] excess deaths are just as much a tragedy and loss to loved ones as those occurring from the virus.’

The comments come amid growing concern a second wave of the epidemic could strike the UK this winter and threaten to overwhelm hospitals again.

A report commissioned by the Government’s chief scientific adviser, Sir Patrick Vallance, found there could be 120,000 Covid deaths this winter in a ‘reasonable worst-case scenario’.

Infections and the reproduction rate – the average number of people each Covid patient infects – has been slowly creeping up since July, when most amenities re-opened.

It has led to a number of localised lockdowns being imposed on towns and cities in cities like Aberdeen and Leicester.

Professor Mortensen and Dr Nagpaul say hospitals should set up more Covid-free sites to resume elective surgeries such as hip and knee replacements and cataract removals.

There were more than 1million fewer surgeries carried out in England in April, May and June and experts fear the waiting list for routine ops could hit 10million by Christmas.

The seven Nightingale hospitals built during the pandemic in case ICU units were overrun should also be used to keep normal care up and running in winter, they said.

And the medics urge the NHS to make use of private beds, which the health service has been paying £400million a month to keep free in case the virus has a resurgence.

But it emerged today that health bosses will give up a quarter of this capacity starting from next month because it is too expensive, according to reports.

Fourteen hospitals in London and eight from around England are being cut from the deal. The Times reports that NHS England plans to end the arrangement in the rest of England in the coming months because the beds have gone unused through the pandemic.

Ninety-two per cent of private beds were bought up by NHS England in March to be used as Covid-free zones for patients without the disease.

The private sector has been leasing the beds out to the health service ‘at cost’, meaning it is not making substantial profit from the deal.

But NHS bosses are said to be planning to try to strike a deal that will only see them pay for beds that are actually used, according to the newspaper.

The private sector has given warning that prices will rise, however, with an industry source saying: ‘It’s hard to see how you can get a better deal than cost.’

An NHS spokesman said: ‘Thanks to this extended agreement, tens of thousands more people will be able to benefit from quicker access to surgery and other treatments, tests and checks.

‘As we move into the next phase of the response to coronavirus, the NHS will also be negotiating a new deal available to all independent-sector providers based more closely on activity to ensure taxpayers get full value from the expenditure.’

Boris Johnson last month committed to an extra £3billion to ‘allow the NHS to continue to use the extra hospital capacity acquired from the independent sector’ until March.

The NHS is trying to fast-track the one-plus million people who missed out on surgery during the pandemic and clear some of the backlog ahead of winter, when more people fall sick and need care.

But it is being hampered by new Covid rules which mean medics can see fewer patients and everything has to be sterilised extra carefully between visits.