Thousands of people flocking to reopened Florida beaches that were forced to close due to the coronavirus pandemic prompt the #FloridaMorons hashtag on Twitter.

Florida Gov Ron DeSantis gave the green light for some beaches and parks to reopen if it can be done safely, even as the Sunshine State recorded its highest single-day increase in confirmed coronavirus cases. As of Sunday afternoon, Florida has more than 25,000 cases of the coronavirus and 748 deaths. 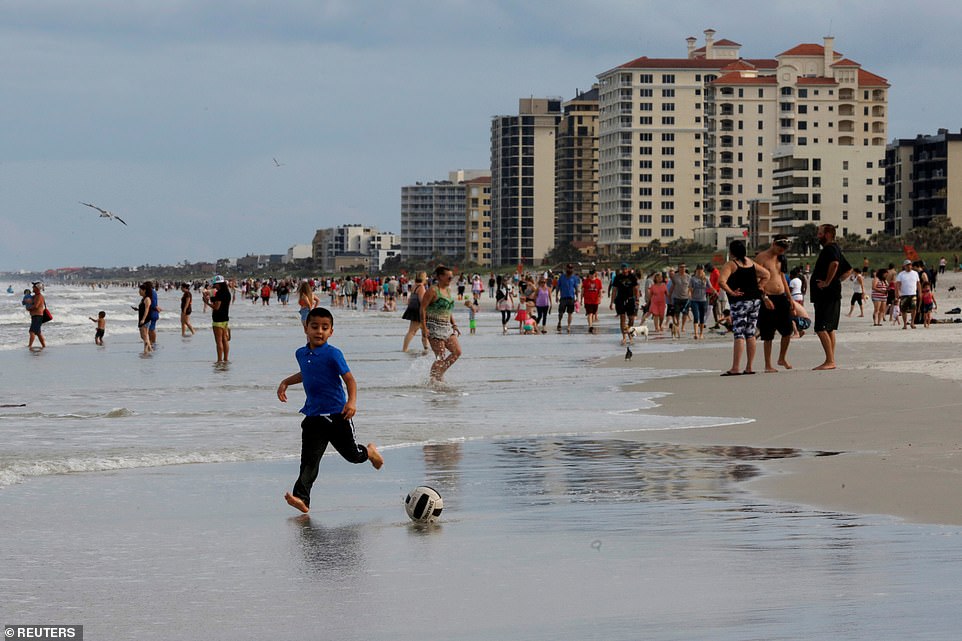 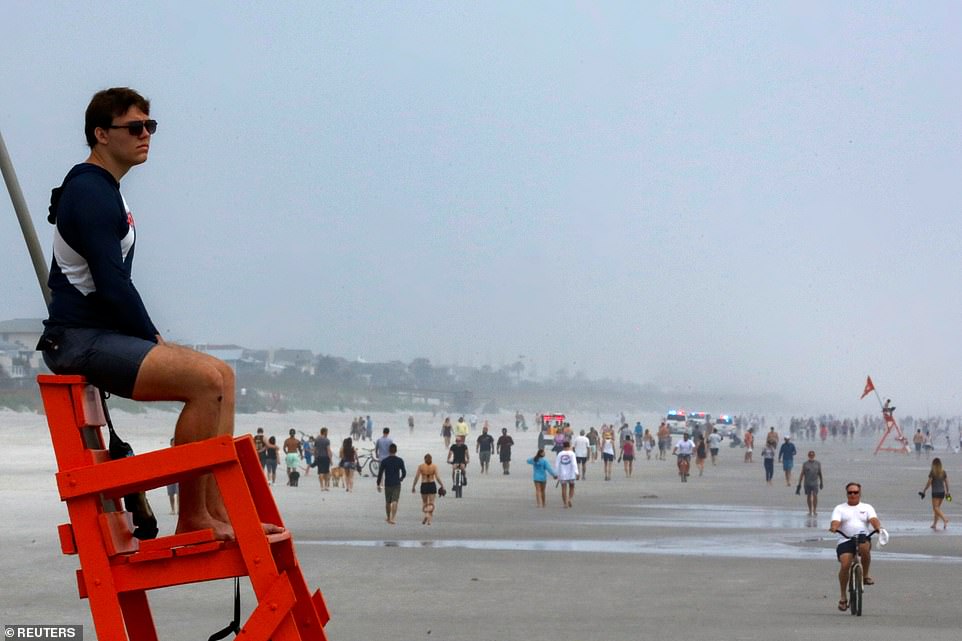 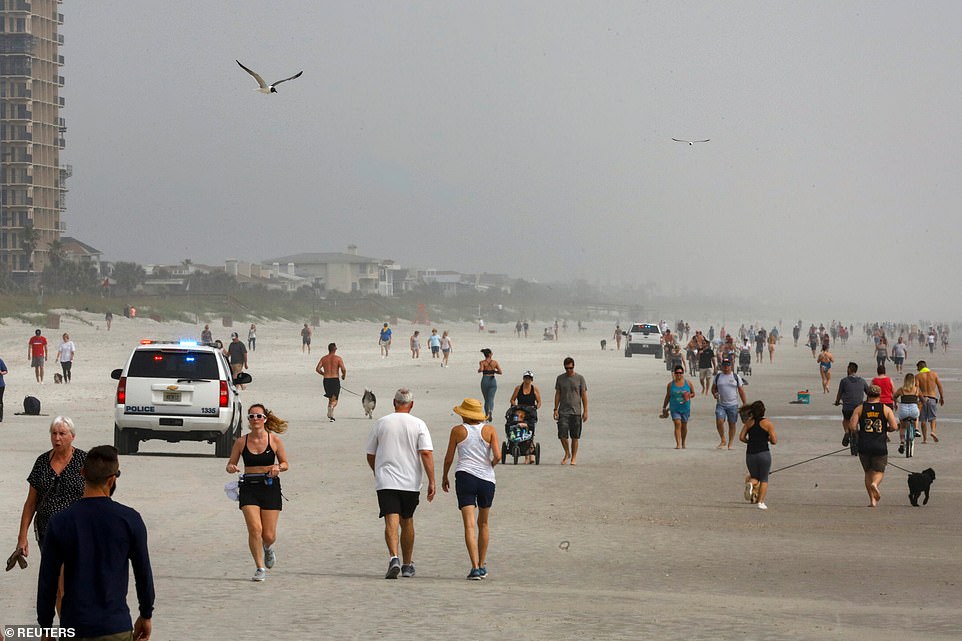 Florida Gov Ron DeSantis gave the green light for some beaches and parks to reopen if it can be done safely, even as the Sunshine State recorded its highest single-day increase in confirmed coronavirus cases. As of Sunday afternoon, Florida has more than 25,000 cases of the coronavirus and 748 deaths 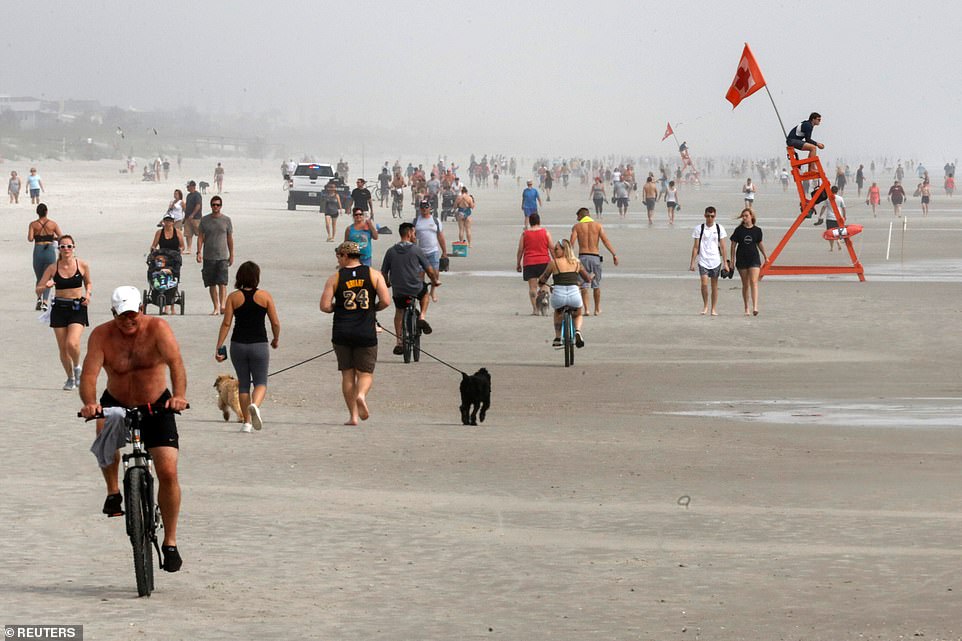 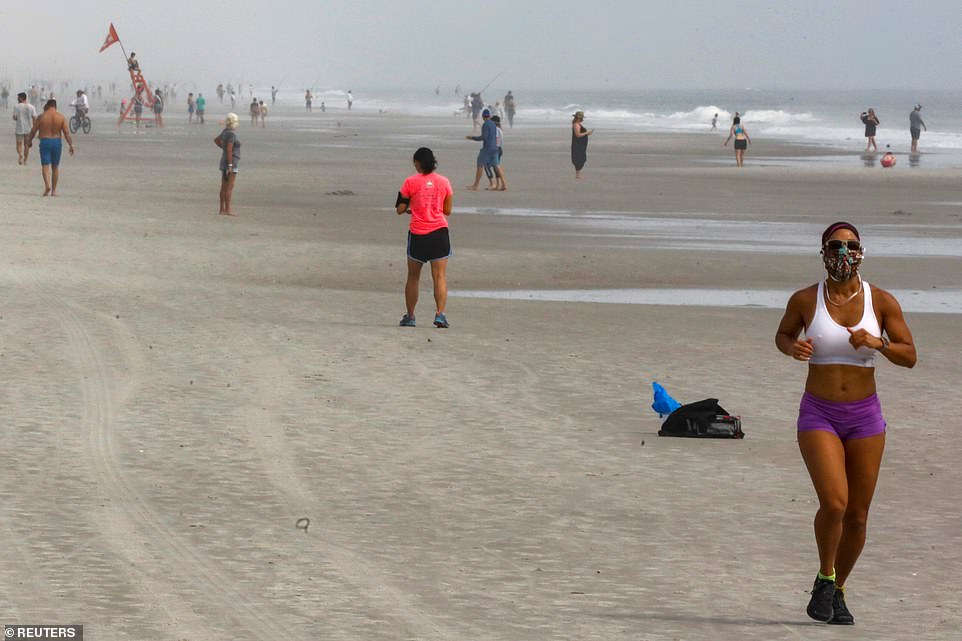 Jacksonville’s beaches will be open daily from 6am to 11am and 5pm to 8pm for exercise such as walking and swimming only.

‘If for some reason it turns to helter skelter, we’re going to pull the plug again,’ Curry warned on Friday.

Curry said he is letting the public back onto Duval County beaches because he is ‘encouraged’ by the rate of infections and hospitalizations and said there is evidence they are flattening the curve.

‘This can be the beginning of the pathway back to normal life,’ he said on Thursday. ‘Please respect and follow these limitations. Stay within the guidelines for your safety as well as for the safety of your neighbors.’

Several people taking to Twitter to voice their concerns over the reopening of the beaches prompted the trend of #FloridaMorons.

A third user tweeted: ‘I understand the push to get back to work. We all have bills to pay. I don’t remotely get the rush to the beaches in some sort of childish own-the-libs hissy fit. Especially since engaging in this behavior endangers being able to get back to work. #FloridaMoron.’ 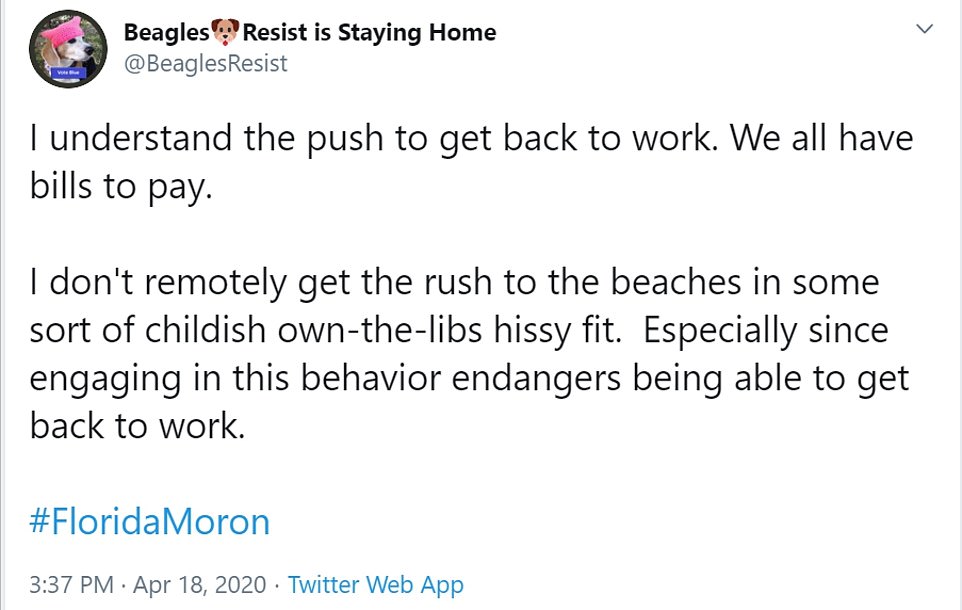 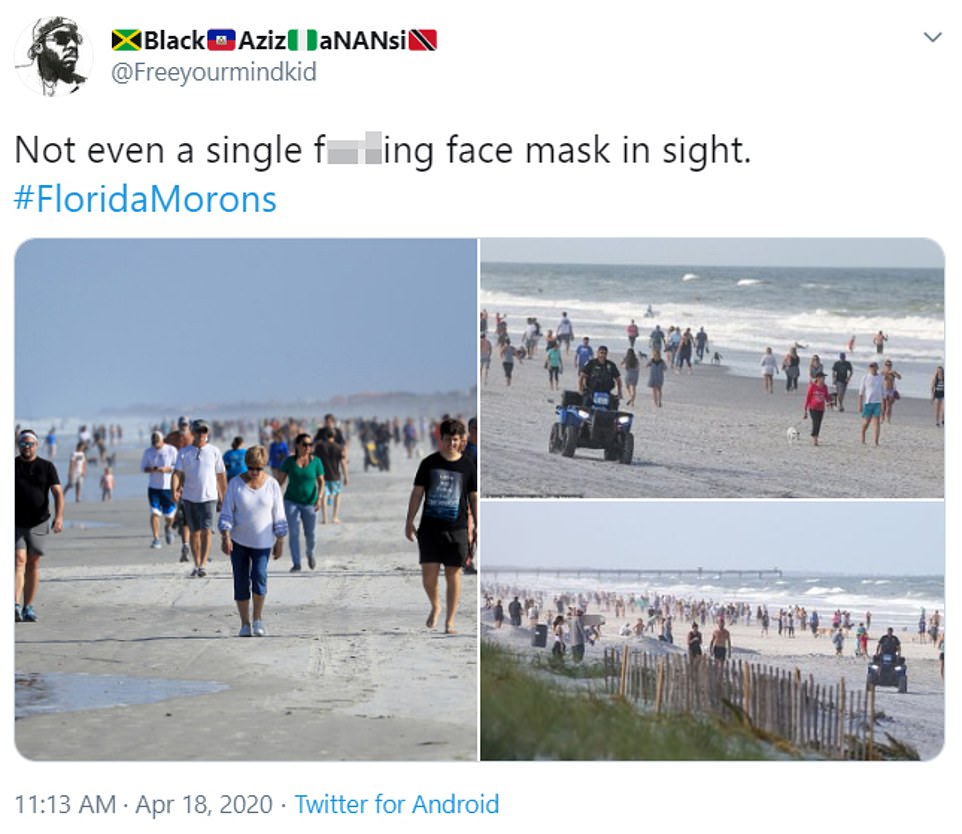 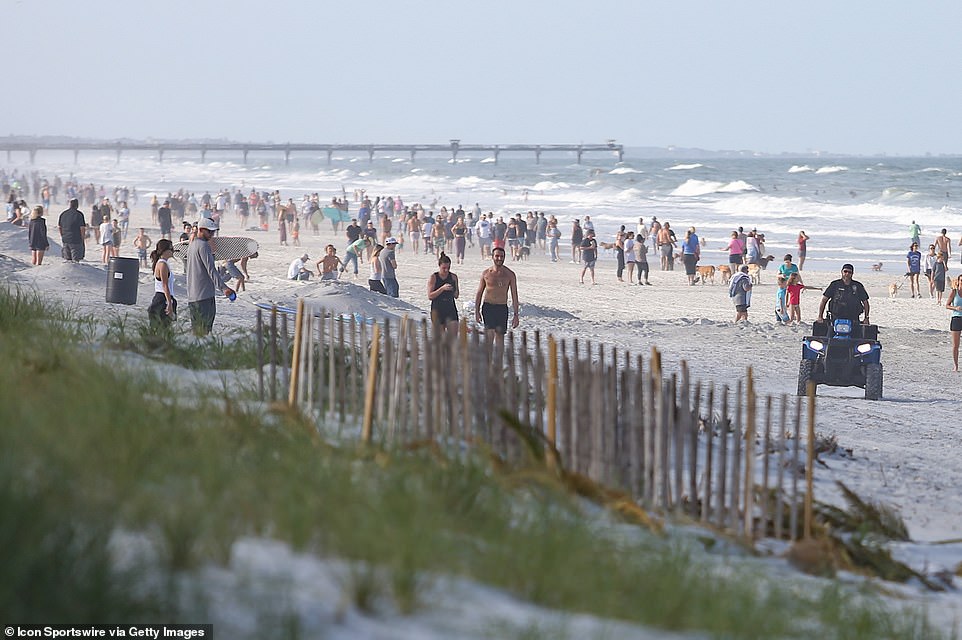 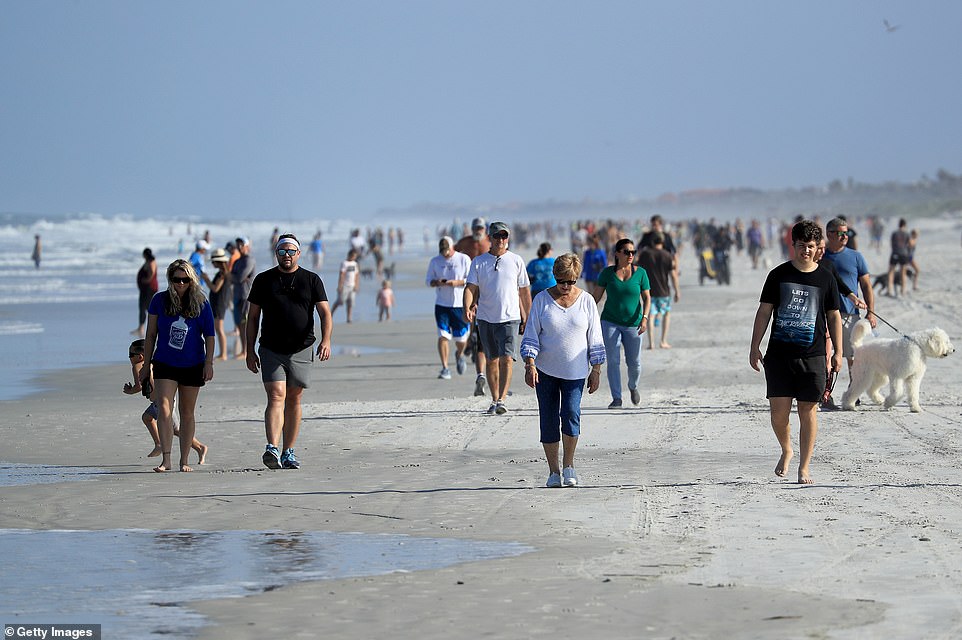 People are seen at the beach on Friday in Jacksonville Beach, Florida. The beaches reopened but only for restricted hours and can only be used for swimming, running, surfing, walking, biking, fishing, and taking care of pets

Florida Department of Health said confirmed cases in the state rose by 1,421 Friday, the highest one-day number yet.

On Thursday, Trump laid out his three-phase plan for re-opening states one by one if they show falling case numbers.

However, the guidelines did not specifically address how to handle outdoor spaces such as parks and beaches.

Florida officials, including DeSantis criticized early on in the pandemic for not closing the beaches during spring break.

Curry’s move means residents can go to the beaches as long as they adhere to social distancing guidelines.

However, sunbathing, camping overnight and gatherings of more than 10 people will be banned.

Jacksonville is one of the first major metropolitan areas to open their beaches.

Santa Cruz in California also lifted restrictions to allow surfing for the first time since a lockdown was implemented.

Jacksonville Beach Mayor Charlie Latham said: ‘If we have to close the beach again, we’ll do it. Safety is still our top priority.’

Neighboring St Johns County announced that its beaches will also be open from 6am to 12pm, seven days a week, under similar restrictions that only allow exercise. 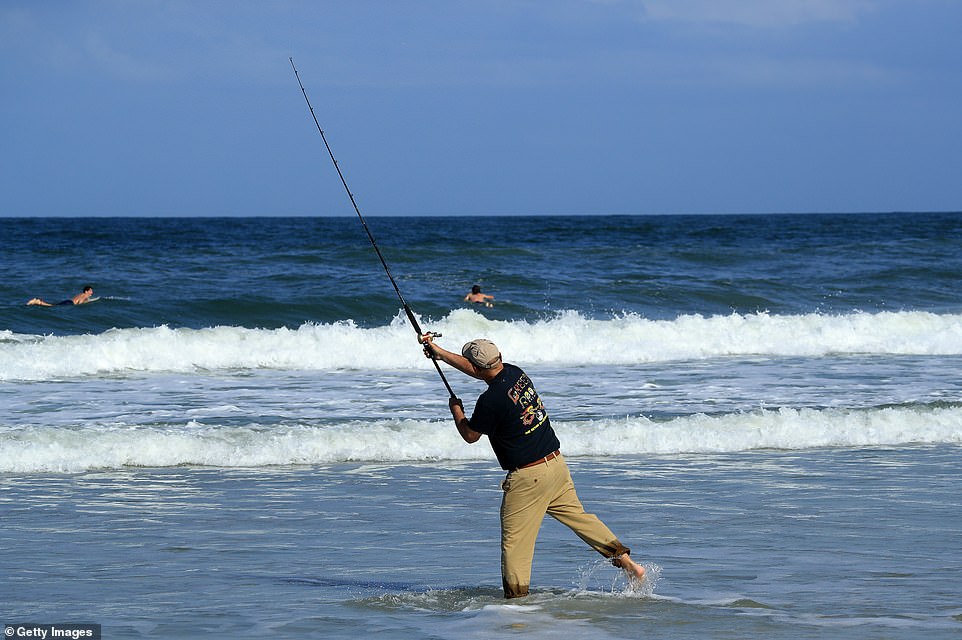 A person fishes in the surf on Friday in  Jacksonville Beach, Florida, after local officials reopened the beaches 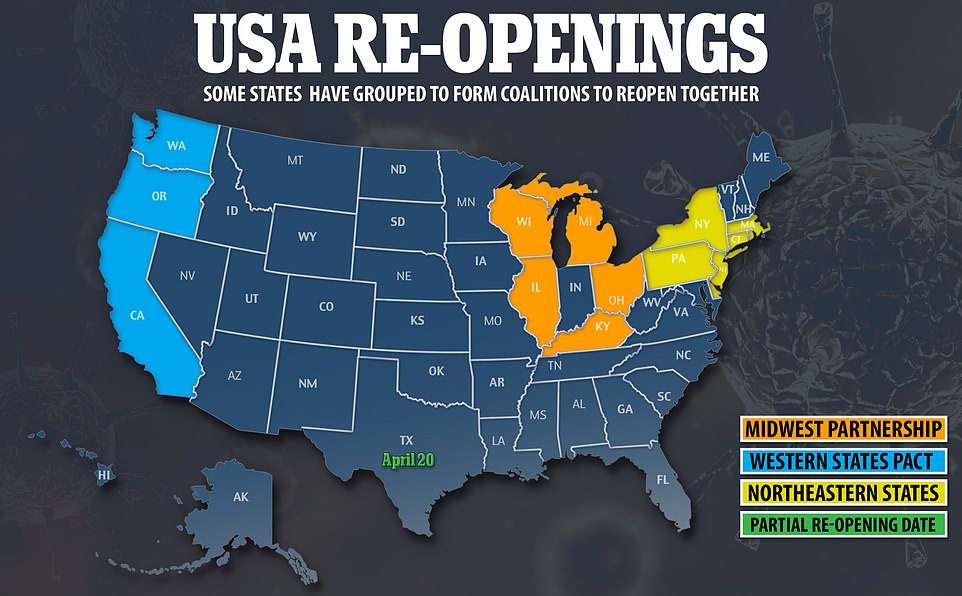 Most other Florida counties have kept their beaches closed in a bid to stop the spread of the virus. Beaches in Glynn County over the state line in Georgia have been open since April 3 for exercise only.

It follows statements from the Trump administration, alongside the president’s three-phase plan, outlining how re-openings will begin at a local rather than national level.

Among the first states to push to reopen appear to be states that Trump carried in 2016 that are led by Republican governors, while a number of urban centers including New York City, Philadelphia, Baltimore, New Orleans, and Washington, DC, continue to be hit hard.

Axios reported that Texas and Florida, both critical parts of coalition, would ‘set the standard’ for reopening. Alabama, and Mississippi are ‘expected to move quickly,’ sources told the publication. 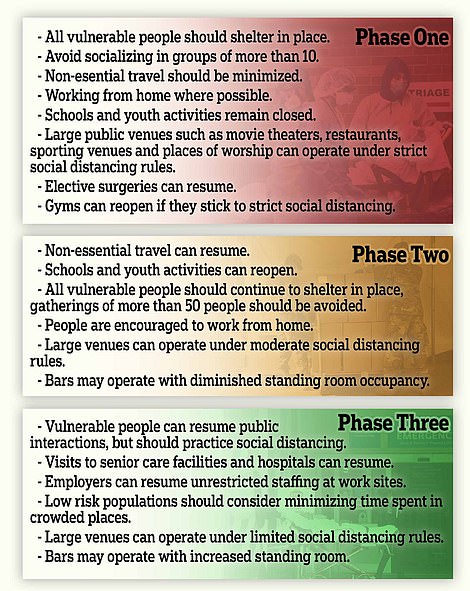 On Friday morning, the head of the Centers for Disease Control, Dr Robert Redfield, indicated that the first openings might come at a local level rather than a state level.

Nationwide, a total of 4,951 Americans died in the 24-hour period ending at 8pm Thursday, an announcement which came just minutes after the president delivered remarks to the nation about the need to reopen as quickly as possible.

Trump declared the nation is in the ‘process’ of winning the war against the coronavirus, and announced the new phased return toward normalcy last night, even as deaths and infections in the nation continued to rise.

The reopening of the beaches in Jackson were deemed as premature by some.

Trump’s administration has also released a three-phase guide which provides only a general idea of how and when states would be able to graduate to a point where their citizens could congregate, work, get educated, and dine in public.

The guidelines state that an area must show declining infection over 14 days. Redfield added Friday that it must be declining ‘consistently’.

He said it was ‘really, really important that the outbreak in these jurisdictions is really declining consistently over a two-week period’ for reopening to occur.

But he said there are currently a number of jurisdictions with ‘have limited activity’ for spread of the disease.

Redfield pointed to the ability to conduct rapid testing and contact-tracing, as well as being able to test individuals who present a ‘flu-like’ illness.

It was not immediately clear which jurisdictions, if any, have that capability now.