Thousands of locked-down Sydneysiders have flocked to the beach to soak up the warm weekend weather after being given the green light to enjoy the ‘safe fresh air’ by the state’s health minister.

With temperatures in the city forecast to hit a sweltering 29C on Saturday, residents were keen to get out of the house despite the state recording 1,599 new Covid-19 cases and eight deaths.

Sydneysiders donning bikinis and boardshorts overflowed Bondi Beach in the city’s east on Saturday morning as police set up checkpoints to keep people from travelling outside of their 5km radius.

Police officers were also seen swarming the beach and interrogating swimmers and sunbakers.

Two people can gather together outside their home for recreation or exercise as long as they’re within 5km of their house and inside their local government area.

It’s understood sunbaking falls into the category of recreation, however masks need to be worn unless residents are strenuously exercising or have an exemption. 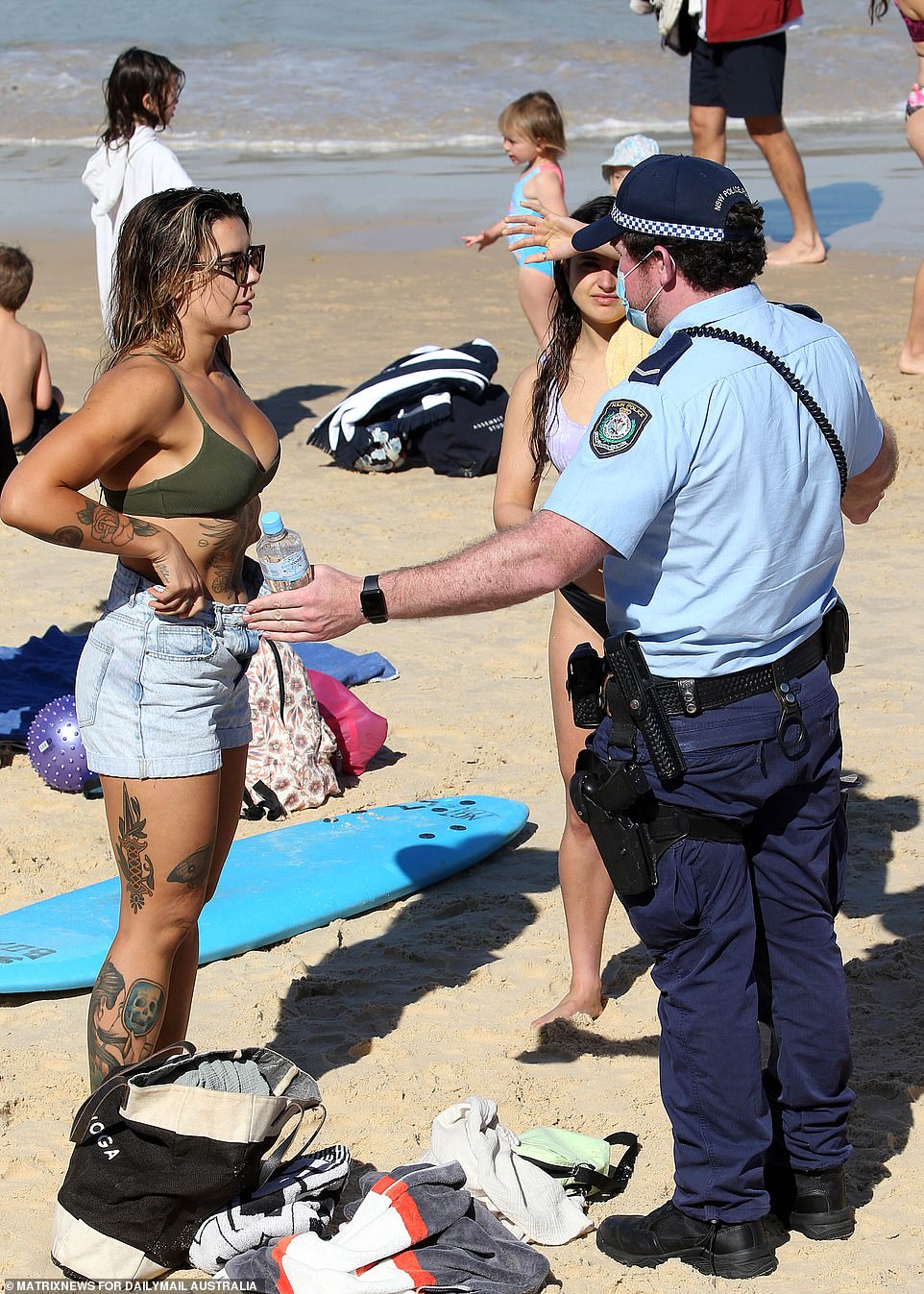 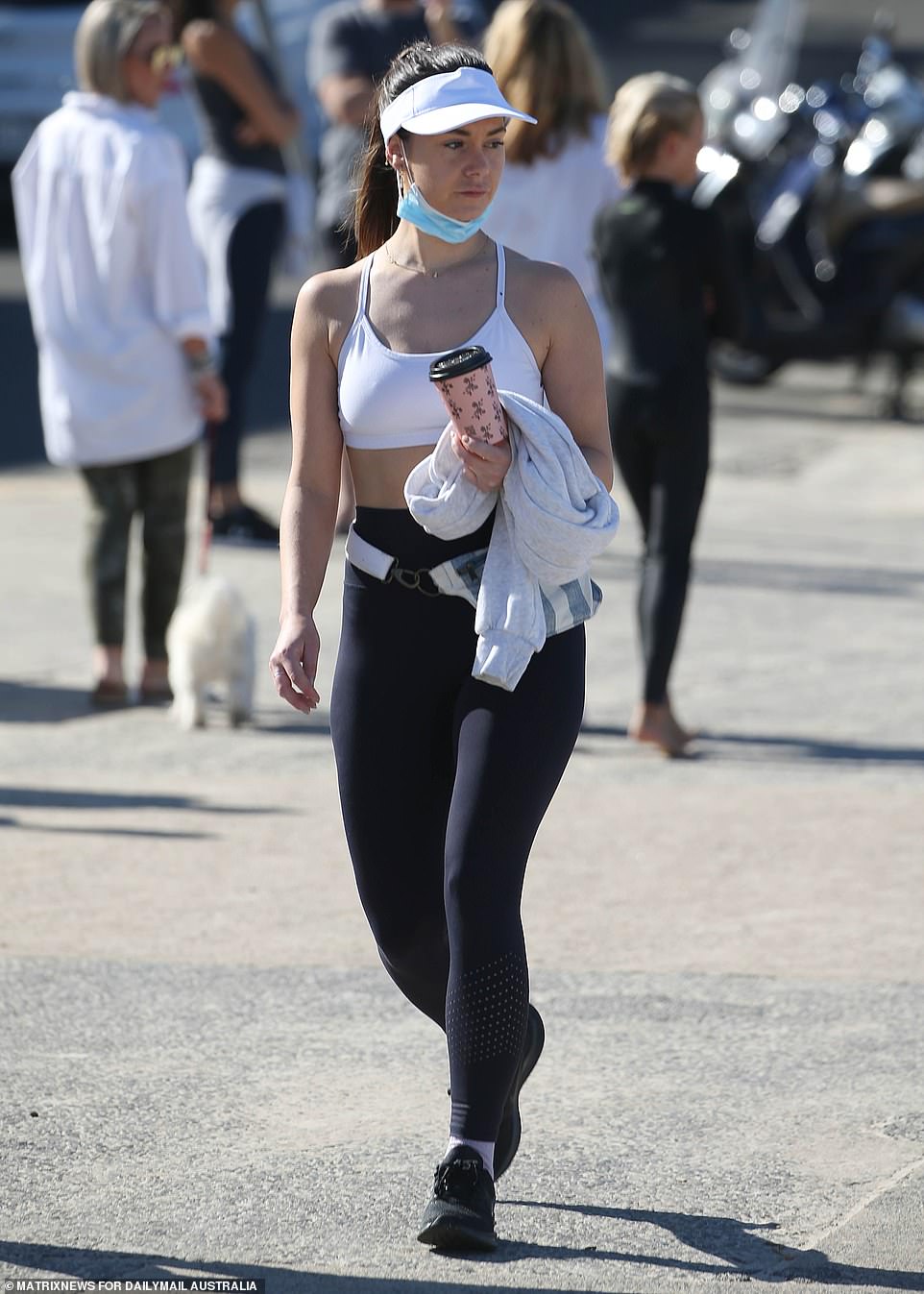 When asked if he was concerned about the large numbers at the beach this weekend, NSW Health Minister Brad Hazzard said he was only worried about those who weren’t vaccinated.

‘Fresh air as we know is the safest place to be at the present time,’ he said during Saturday’s Covid-19 press conference.

‘But we do state maintain your distance and be careful. While we have many more to get to the required vaccination we do have risks.’

He said generally people had been complying with the health orders well.

‘I know the media will have photographs of people out and about today, the tend to do that, generally that is a safe place to be,’ he said.

Checkpoints have been setup along main roads in Bondi with police checking driver’s licences to confirm they’re within 5km of their home. 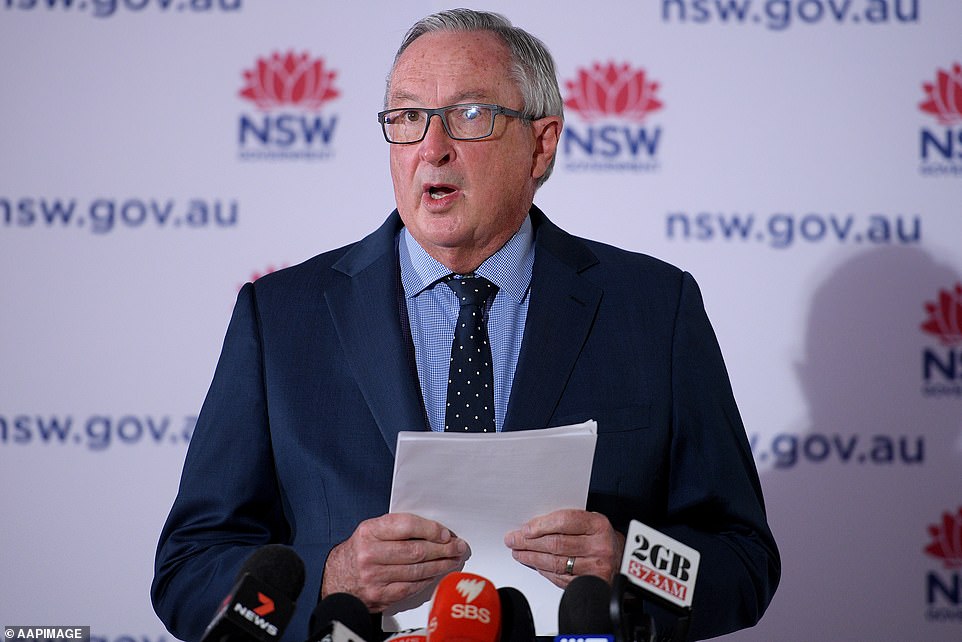 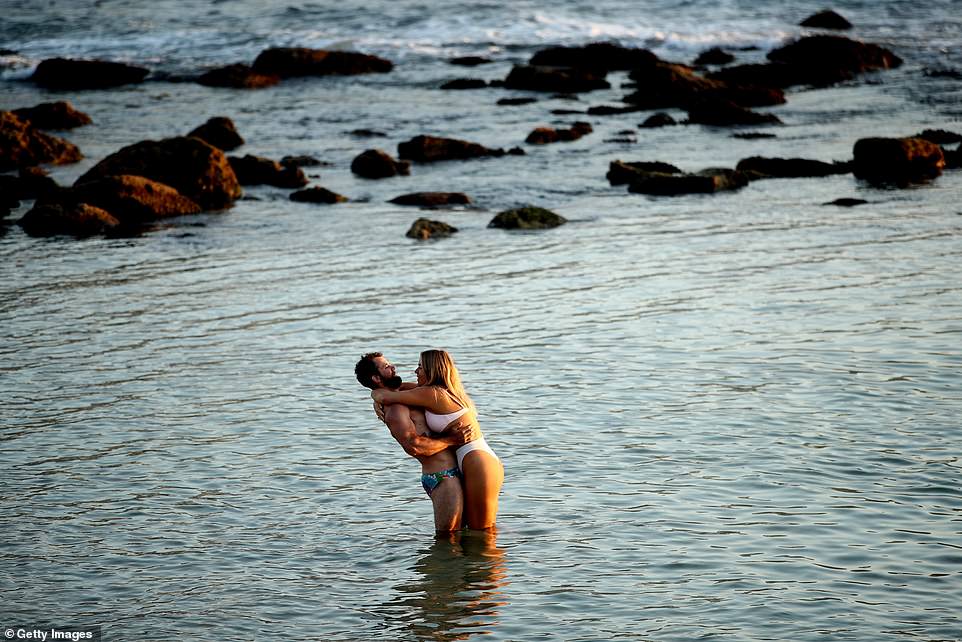 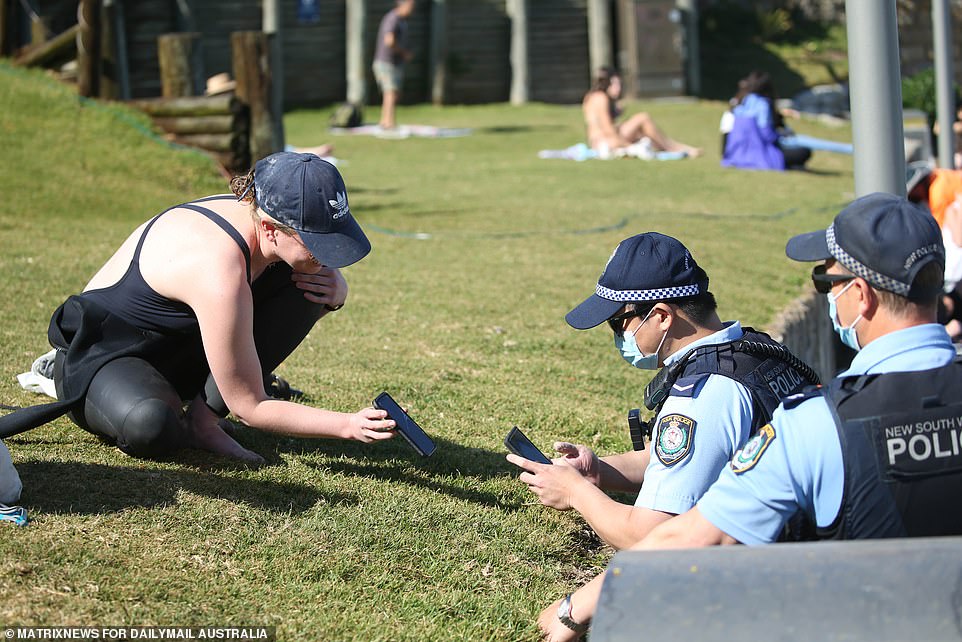 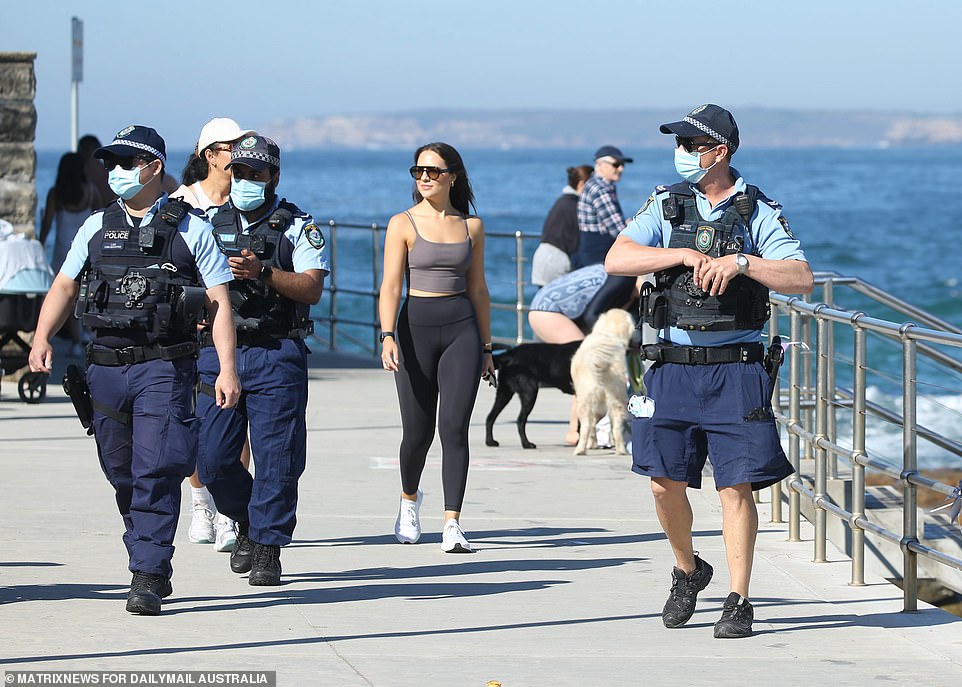 WHAT ARE THE RULES FOR VISITING THE BEACH?

NSW Health states up to two people can gather for exercise or recreation as long as they remain within 5km of their home and inside their Local Government Area – unless you live in one of the 12 LGAs of concern.

It is widely understood that ‘recreation’ includes sunbathing.

A major focus is likely to be ensuring residents are not stretching their allowed 5km limit to reach the coast.

But several other restrictions are likely to keep the police and marshals busy this weekend.

Beachgoers cannot gather in groups of more than two and must maintain 1.5 metres apart at all times.

Maybe toughest of all, sunbathers are expected to wear approved masks on the sand – unless they have an exemption or are strenuously exercising.

Sadly Bayside is the only LGA of concern with beaches – and under public health orders its residents cannot go and enjoy a recreational sunbake, as those in the east can.

Earlier local authorities in Sydney’s eastern suburbs encouraged those who lived in the 5km radius to make time for a swim – as long as they follow the rules.

”[We] have anticipated the forecast warmer weather this weekend and have been coordinating with the Police, Transport for NSW, the Department of Health and neighbouring Councils,’ Waverley Mayor Paula Masselos told Daily Mail Australia on Friday.

Mobile signage will also be in place reminding sun lovers to do the right thing.

Beachgoers cannot gather in groups of more than two and must maintain 1.5 metres apart at all times. 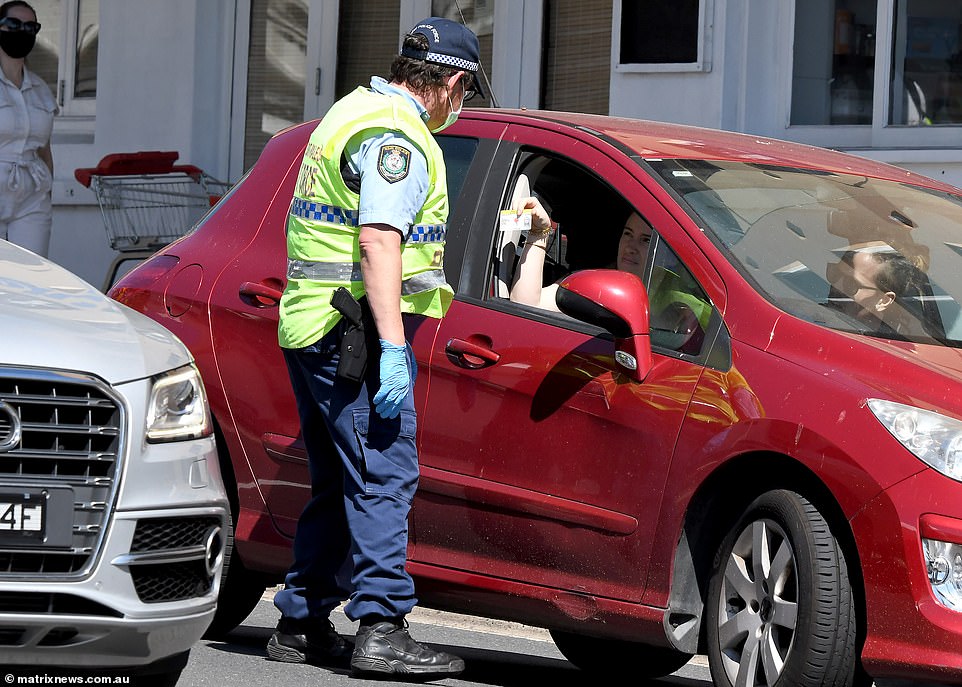 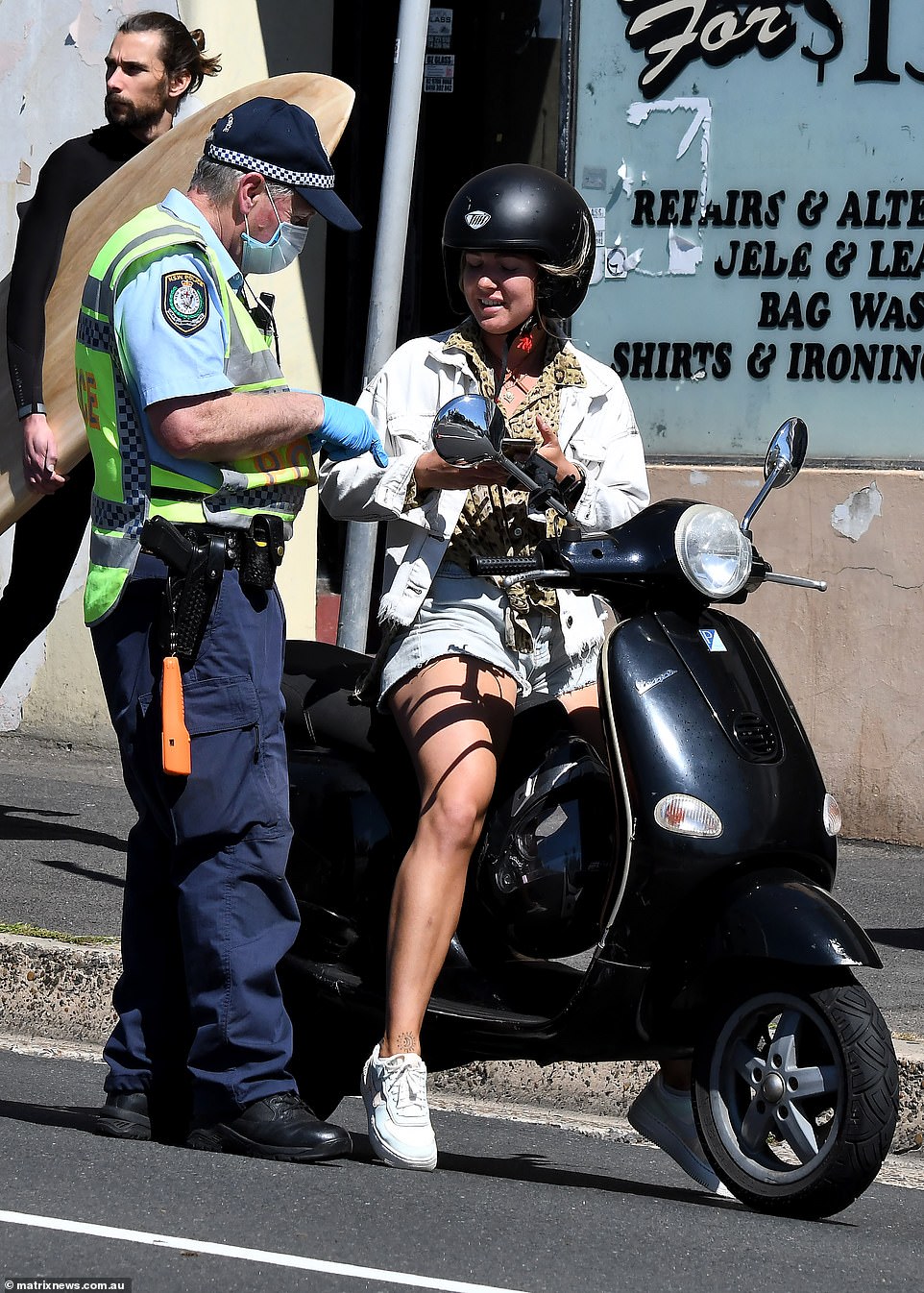 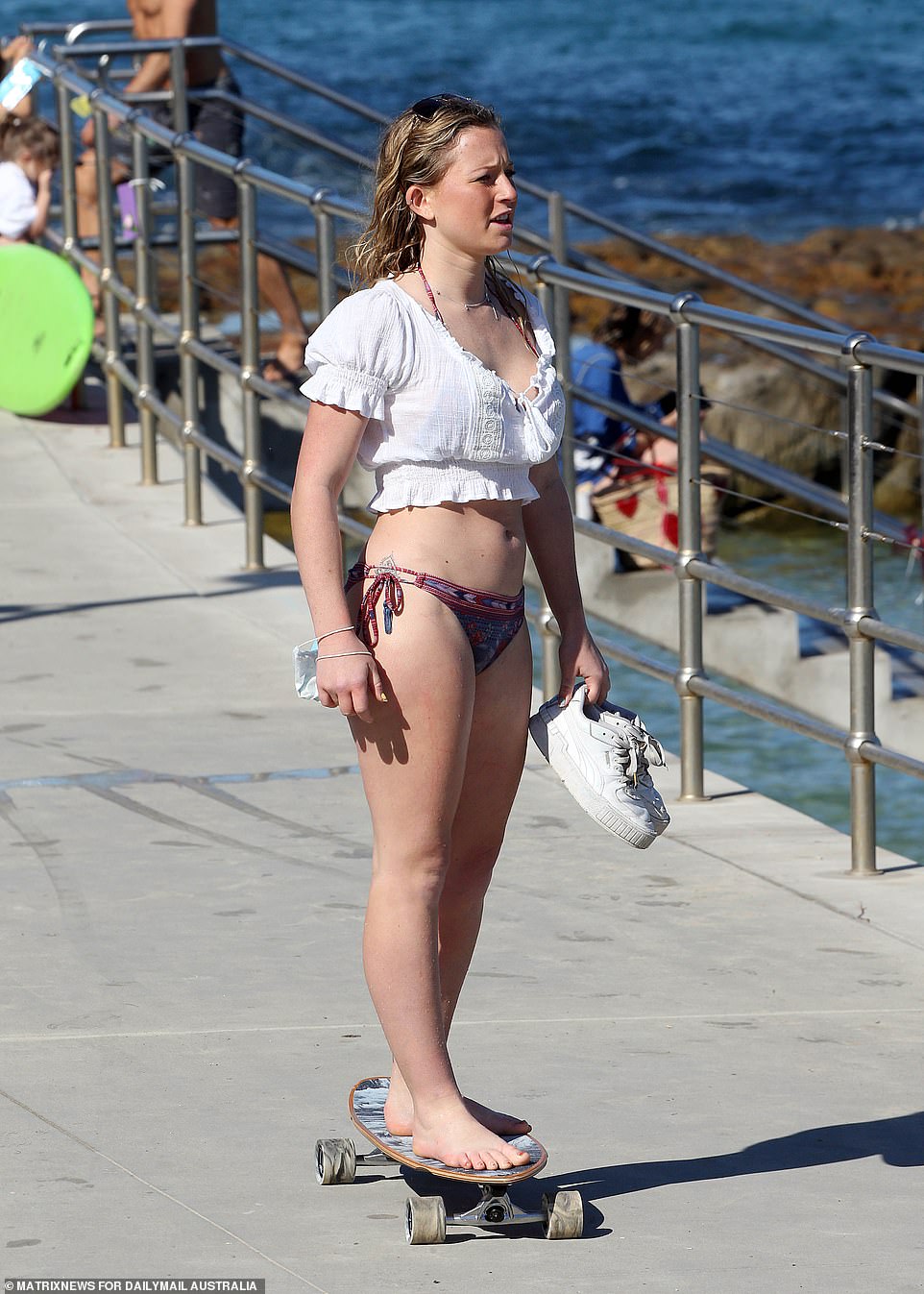 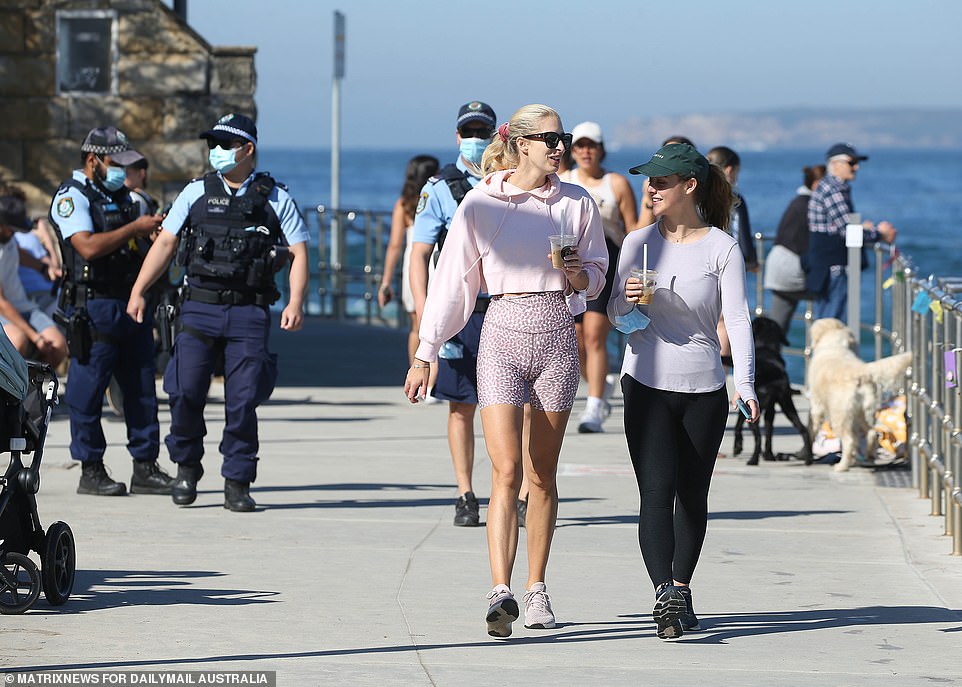 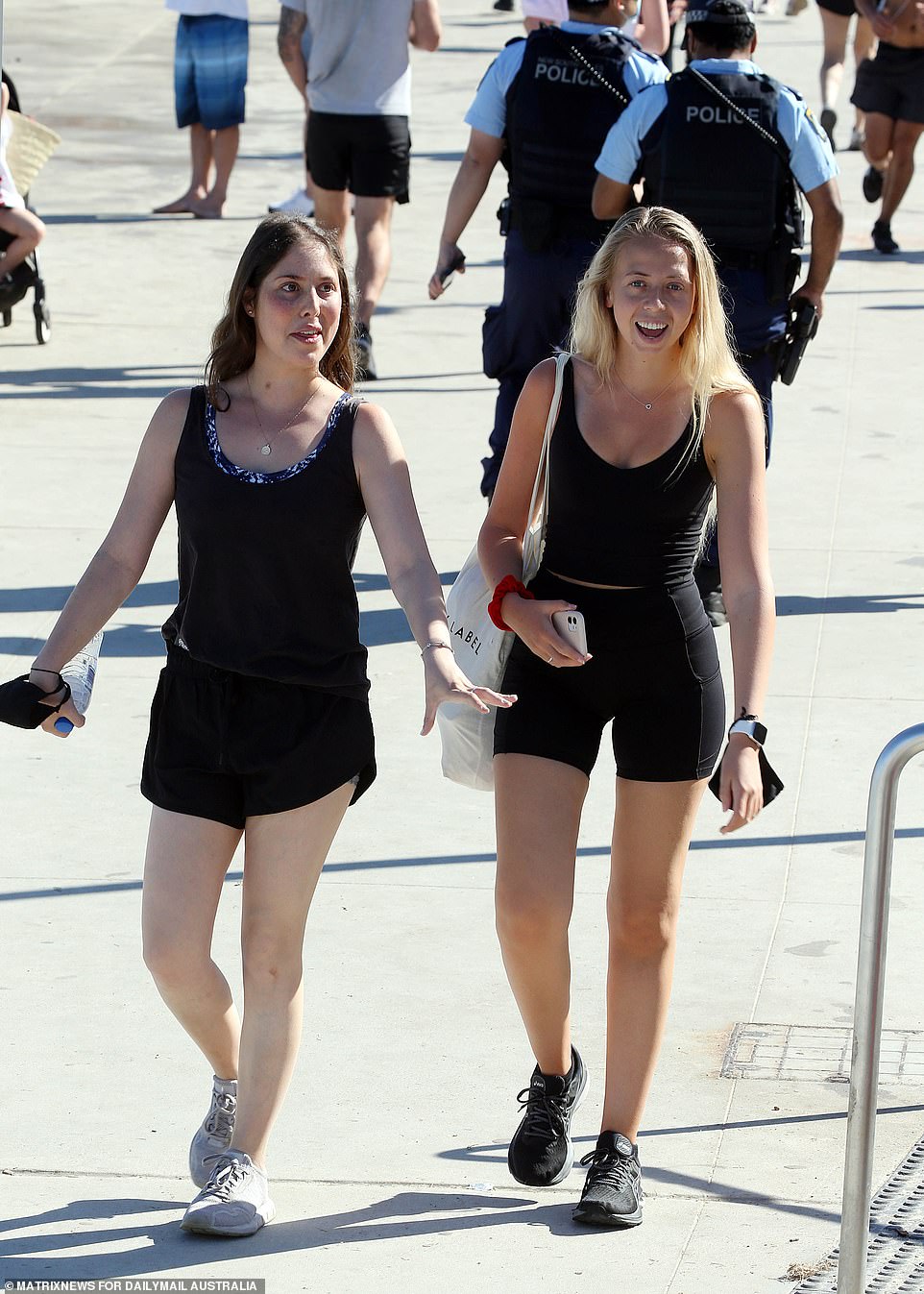 Other eastern suburbs beaches, including Clovelly, Maroubra and Coogee are also expected to be packed over the weekend 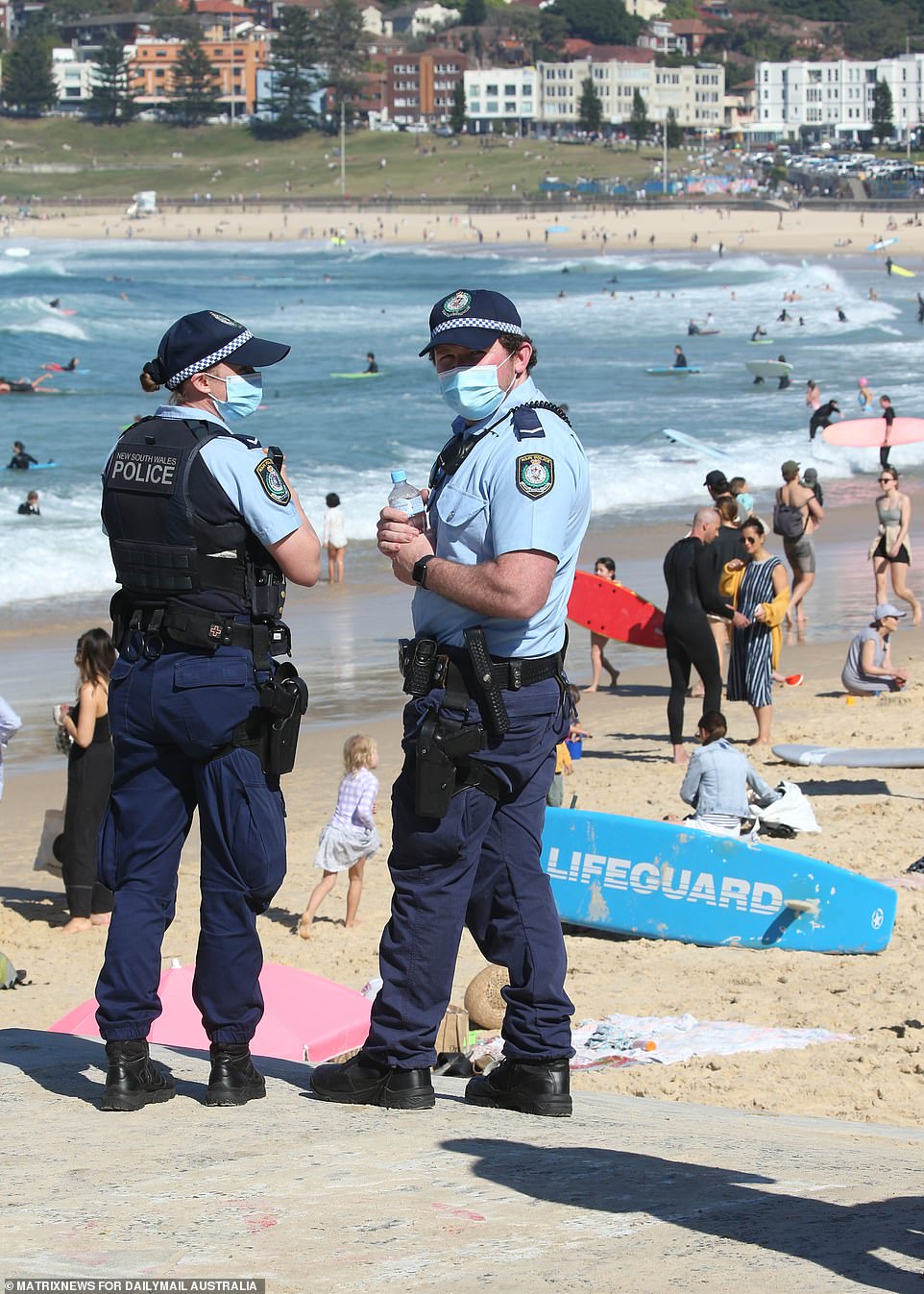 A senior eastern suburbs council spokesperson who spoke with Daily Mail Australia agreed that groups of people on the sand without masks on ‘is a bad look’ – especially to residents in the 12 hardest-hit LGAs – but said ‘that’s up to police to deal with’.

Other eastern suburbs beaches, including Clovelly, Maroubra and Coogee are also expected to be packed.

Woollahra Council will have security guards on duty at its swimming spots – Murray Rose Pool in Double Bay, Gibsons Beach and Camp Cove in Watsons Bay and Parsley Bay in Vaucluse.

The security staff will attempt to monitor the swimming areas to ensure the public don’t breach social distancing rules.

No matter how beachgoers behave one thing councils say they will not be doing is closing any beaches.

A Randwick council spokesman said all eastern suburbs councils ‘want to keep the beaches open because its well-known they are good for our mental health’.

The last time Sydney beaches were closed was March 2020, when police closed Bondi, Tamarama and Bronte as a result of overcrowding.

While eastern suburbs beaches, Manly and the Northern Beaches, should be busy, Bayside council’s beaches – including Brighton-Le-Sands could be subject to police attention. 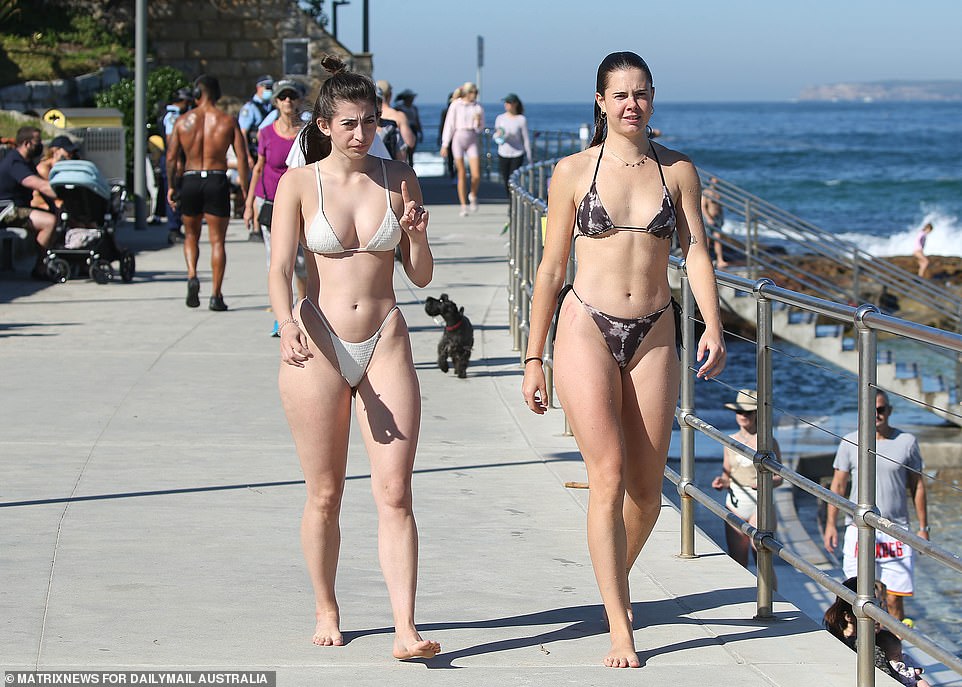 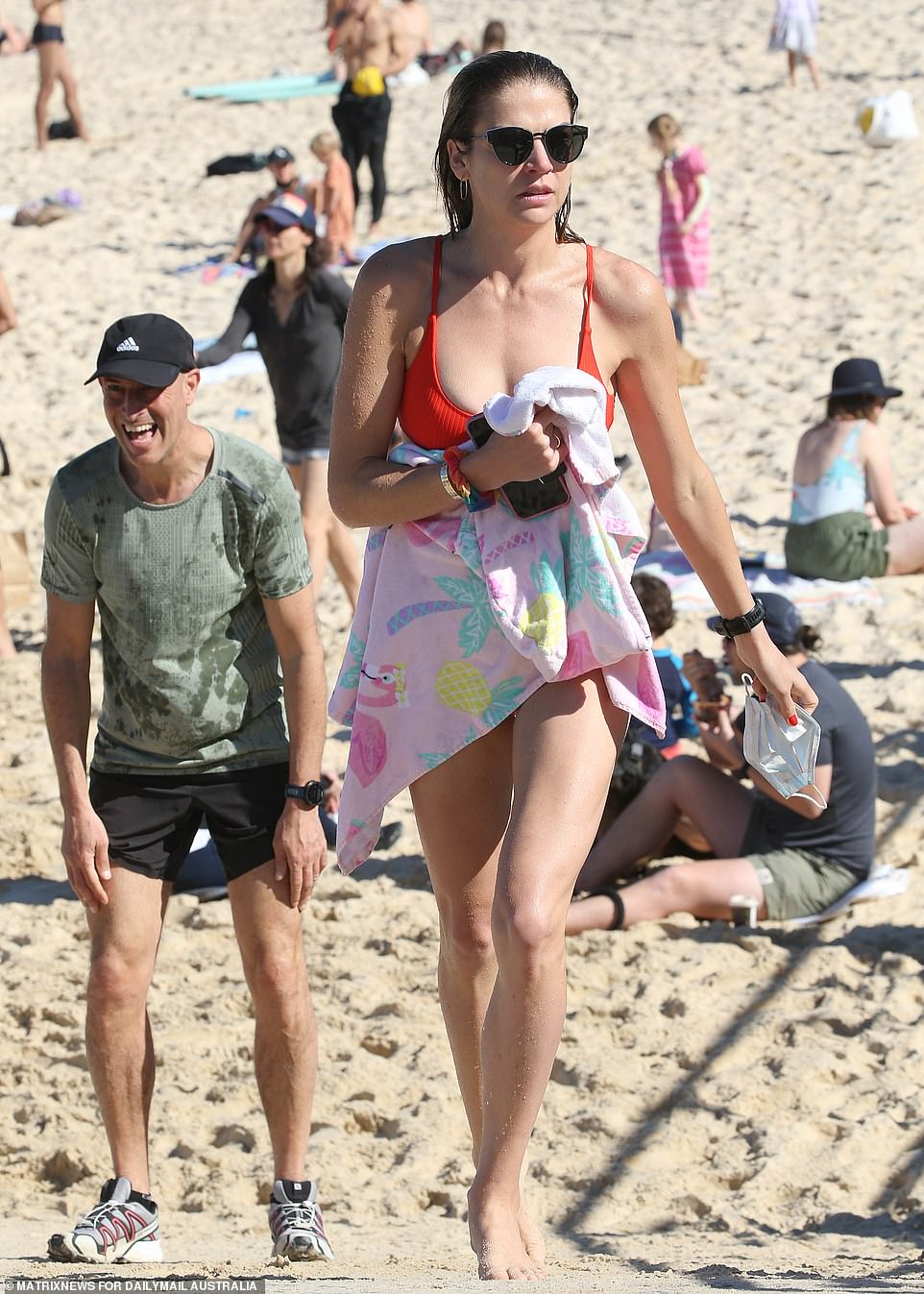 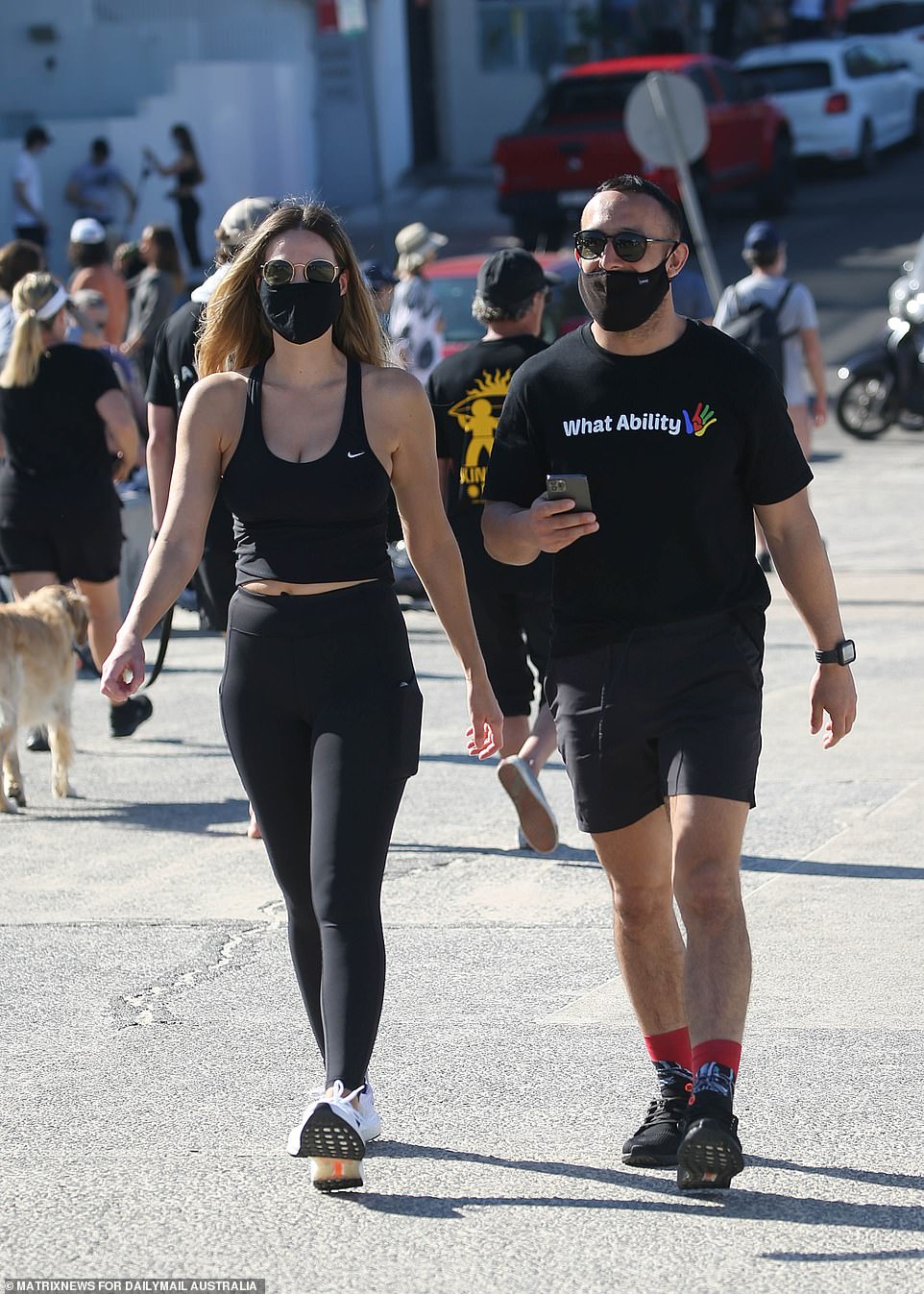 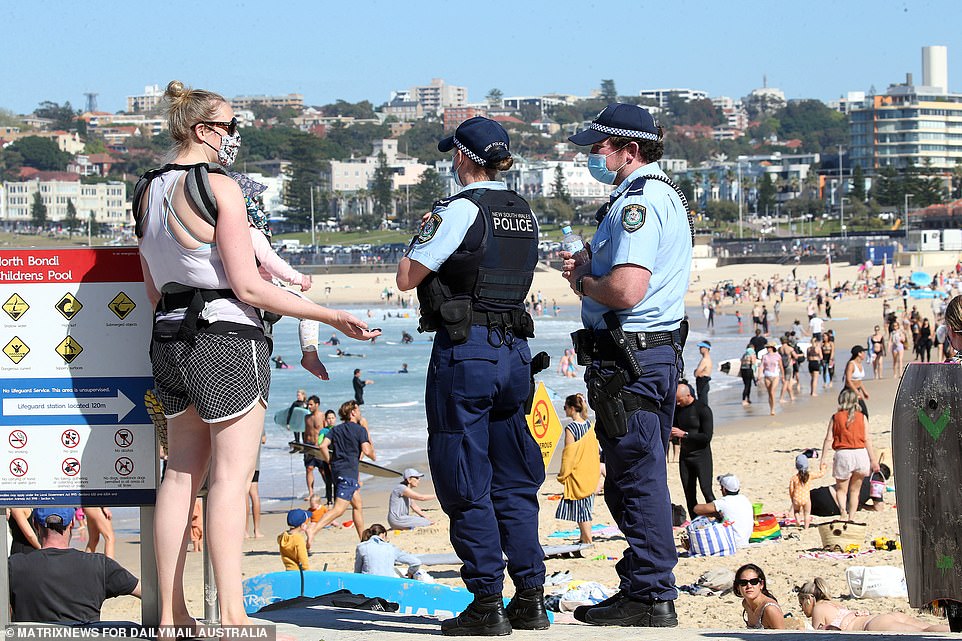 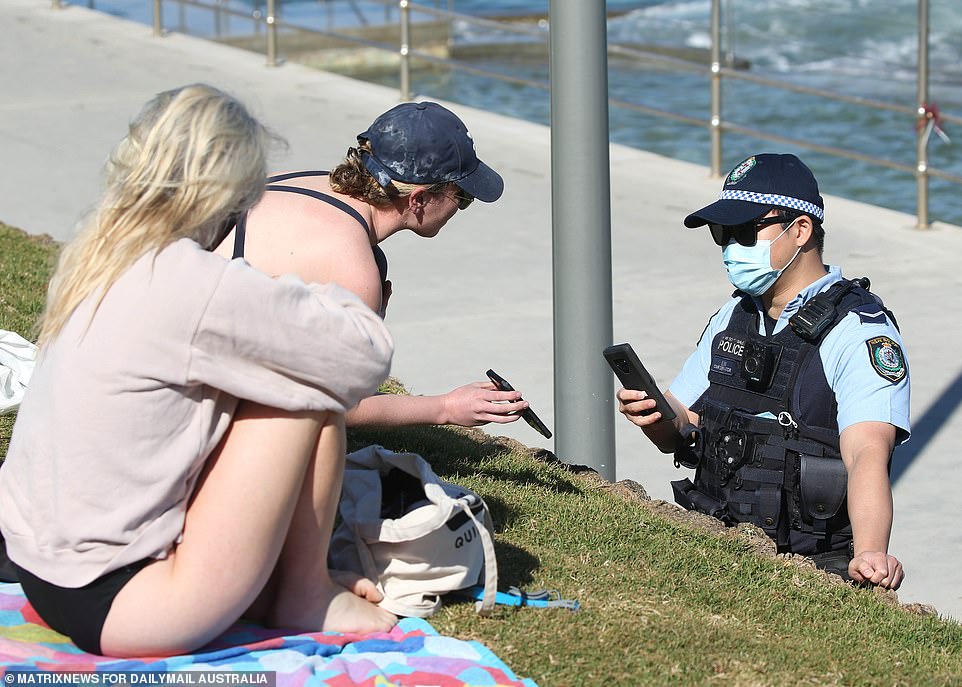 Bayside is the only LGA of concern with beaches – and under public health orders its residents cannot go and enjoy a recreational sunbake, as those in the east can.

NSW Police confirmed to Daily Mail Australia that they will be out in numbers this weekend.

‘As part of Operation Stay at Home, operations will continue across the weekend to ensure compliance with the current orders.’

On Friday evening a video shared to social media showed countless residents catching the sunset in Bondi – with most maskless and not social distanced.

Footage showed groups lazing around on the grass near the beach with hardly a care in the world.

Health authorities revealed on Saturday along with the surge in new cases, eight people had died from the virus.

Another was a south-Sydney woman in her 80s, a south-western man in his 80s and another man in his 40s. None of them had been vaccinated.

There are 1,164 patients being treated in hospital with 221 people in the intensive care unit and 94 on ventilation.

The cases come as thousands of residents in a handful of Covid-free regional areas awoke to their first day of freedom in four weeks on Saturday.

Stay-at-home restrictions have lifted for much of the state’s northeast and southwest, including in the regional centres of Coffs Harbour, Wagga Wagga and Albury.

Masks will be mandatory at indoor public venues, but hospitality venues, shops, sporting facilities and beauty services have all been cleared to reopen with restrictions.

Up to to five people will be allowed in a home and up to 20 can gather outdoors.

Entertainment venues like cinemas and theatres can also open with conditions, and outdoor and stadium events can also resume, with limits on attendees.

Weddings and funerals will be limited to 50 people, with churches and places of worship to open subject to the four square metre rule and no singing.