Connecticut and Rhode Island are the only two US states reporting a decline in new coronavirus cases compared to last week as cases across southern and western states surge to record levels.

The total number of infections has now surpassed 2.5 million in the United States, after the country reached an all-time one-day high of 40,000 new cases on Friday.

A rise in documented cases was reported in a staggering 36 states, including Florida, which some experts are tipping to become the next epicentre of the virus, after it reported 9,585 new cases Saturday and 8,500 more Sunday.

Saturday’s total, a single-day record since the start of the pandemic in March, rivals that of New York’s peak of daily cases recorded in early April.

The new cases bring the statewide total to 140,075. Florida is now reporting 3,419 coronavirus related deaths, which is an increase of 29 since Saturday.

Florida Gov. Ron DeSantis has insisted there is nothing to worry about and ‘nothing has changed’ in the last week, blaming the state’s troubling surge as the result of a ‘test dump’.

And inhabitants of the sunshine state appear to equally as skeptical, with the sharp increase in COVID-19 cases doing little to deter thousands from flocking to beaches all over Florida. 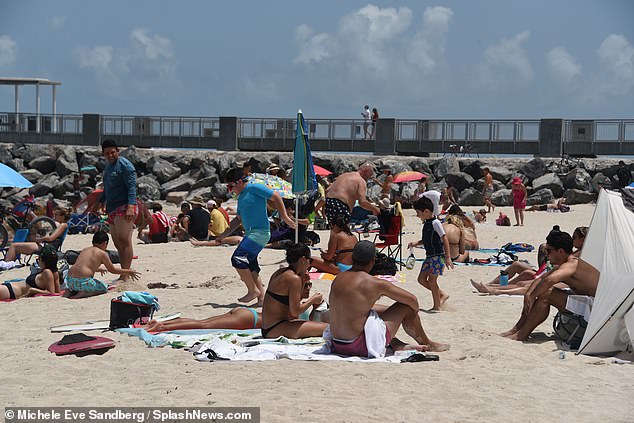 Florida reported 9,585 new cases Saturday and 8,500 more Sunday – with experts tipping it to become the next epicenter of the virus

On Delaware’s Rehoboth Beach Saturday, hot weather and clear skies saw thousands of dwellers take to the shoreline as social distancing measures were forgone in search for a sense of normalcy. Similar scenes were also observed at Miami’s famed South Beach.

While Cocoa Beach saw less visitors than typical for a late June weekend, Mayor Ben Malik voiced concerns about crowds flocking to the beach but said he believes that fresh air and sunshine is much needed as long as people take precautions.

‘My personal opinion is the beach is such a wide spot that people can stay distanced,’ Malik said.

Although state and local restrictions on beaches and businesses might stop some spread, people must ultimately be responsible for themselves, Malik added.

‘At the end of the day it’s impossible for the government to regulate common sense or we’ll be accused of some 5G conspiracy nonsense.’

Another hot-spot that has emerged in the south since businesses were permitted to reopen in recent weeks is Texas.

The state set a record for coronavirus-related hospitalizations for the 16th day in a row on Saturday, with 5,523 patients being treated.

Despite the ominous statistics, hundreds of tubers were seen floating in close proximity on the Comal River in New Braunfels. 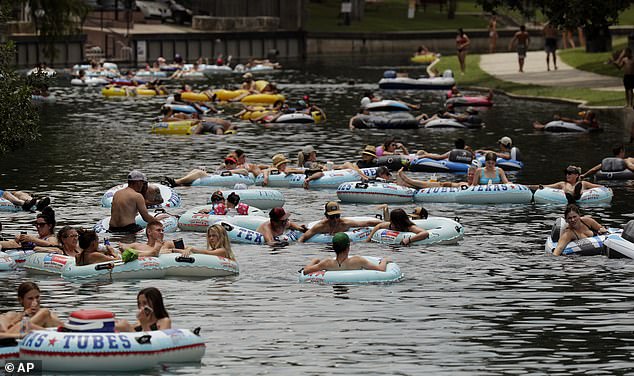 Despite the ominous statistics, hundreds of tubers were seen floating in close proximity on the Comal River in New Braunfels

As coronavirus cases soar in Houston, the city’s paramedics say they’re facing hour-long wait times when transferring patients from ambulances into the hospital.

Houston Fire Chief Sam Peña told KHOU that transfer times had doubled or tripled in some cases as the department grapples with spiking calls for service and a shortage of first responders.

‘The longer it takes us to service those critical calls, it is going to cost us lives,’ he told the news station. ‘Our system is getting strained.’

Coronavirus cases have skyrocketed in Texas since the beginning of June, with Houston emerging as the state’s epicentre.

Harris County, which encompasses the city, raised its COVID-19 threat indicator to the highest level last week, issuing an emergency alert which said the outbreak was ‘severe and uncontrolled’.

Hospital executives said last week that they were prepared to deal with the influx of patients by scaling back nonessential procedures to free up beds.

However, Marc Boon, president of Houston Methodist Hospital urged the public to take action, too, to prevent the system from becoming overwhelmed.

‘The time is now for everybody to dramatically change their behaviors to get this virus under control,’ Boom said, ‘so that our hospitals for the weeks to come are there and able to handle this.’

Gov. Greg Abbott issued a new executive order on Friday scaling back on reopening Texas after a significant surge in coronavirus cases. Starting at noon, bars and breweries were ordered to close, except for to-go services.

From Monday, restaurants, which had been operating at 75 percent dine-in capacity, will also have to scale back their operations back to 50 percent, following Abbot’s order.

‘I ask all Texans to do their part to slow the spread of Covid-19 by wearing a mask, washing their hands regularly, and socially distancing from others,’ Abbot said announcing the measure. ‘The more that we all follow these guidelines, the safer our state will be and the more we can open up Texas for business.’

Abbott voiced regret about prematurely reopening the state to KIVA, insisting: ‘If I could go back and redo anything, it probably would have been to slow down the re-opening of bars.

‘People go to bars to get close and to drink and to socialise, and that’s the kind of thing that stokes the spread of the coronavirus,’ he said.

But the move is said to have angered the Texas Bar and Nightclub Alliance who said they will be filing a lawsuit against the state regarding the executive order.

In a letter, the organization said: ‘We support our members in the constitutional right to protest by keeping your businesses open.’

The letter called Abbot’s decision ‘irresponsible and shameful’, adding that members have voiced anger about being forced to shutter their business while salons and restaurants are allowed to remain open.

TBNA said it is providing legal counsel to any business owners that are fined, charged or have their licenses suspended for remaining open.

It marks the most coronavirus cases reported in a single day in the state, breaking Saturday’s mark of 3,591. It is also the seventh time in the last 10 days that daily cases surpassed 3,000.

Arizona Gov. Doug Ducey lifted the stay-at-home orders in May and claimed health officials had been following federal guidelines regarding the virus.

Despite lifting state restrictions, Ducey is asking residents to stay at home to avoid any further spikes.

‘The rate of the spread of this virus is unacceptable and it is time for us to step up our actions and our personal responsibilities regarding this virus,’ he said.

The PCR Percent Positive rate continued to rise from 11.4 percent on Saturday to 11.7 percent on Sunday, continuing an upward surge since the start of the month. It was 11.1 percent on Friday compared to 6.7 percent on May 31.

‘We expect that our numbers will be worse next week and the week following,’ Ducey said.

At least 12 states in total have either halted or rolled back their reopening efforts in the hope of stemming the virus’ spread.

Washington Gov. Jay Inslee announced Saturday he’s pausing his state’s reopening plan due to rising cases. Some counties were preparing to enter the fourth phase of reopening, ‘which would essentially mean no restrictions,’ the governor’s office said in a statement.

‘Phase 4 would mean a return to normal activity, and we can’t do that now,’ the statement said. ‘This is an evolving situation and we will continue to make decisions based on the data.’

As the number of coronavirus cases continues to rise across the country, so too have confirmed cases among younger people.

In Mississippi, officials have placed the blame on fraternity parties as being one of the driving forces of the surge.

California Gov. Gavin Newson also reported an increase in cases of younger groups of people testing positive for the virus.

‘There is a sense that a lot of young people, well you’re young so you feel a little bit more invincible but, respectfully, often that can be a selfish mindset,’ Newsom said.

Gov. DeSantis said that while the median age for those affected by the virus in March was in the 60s, in the last two weeks that number has dropped to people in their early 30s.

DeSantis urged younger people to be cautious and vigilant, adding that though they may not be at risk of serious complications, they could easily pass the virus onto someone who is.

The state’s community transmission, he said, is ‘being driven by that 18 to 35-year-old group.’

‘You have a responsibility to be careful if you’re in contact with somebody who is more vulnerable,’ he said. ‘We’ve been stressing avoiding the three Cs which are: closed spaces with poor ventilation, crowded places with many people nearby and close-contact settings, such as close-range conversations.’

Former Centers for Disease Control Director Tom Frieden warned Sunday that the recent spike in COVID-19 cases are not just a reflection of increased testing efforts, but a real spread of the virus of which Americans must be aware of to help combat the pandemic.

‘The virus has the upper hand,’ Frieden said on Fox News Sunday. ‘This virus is not going to go away on its own. We have to stop it.’

He said that though people are tired of staying at home, ‘the virus is not tired of making us sick.’

Friedan blamed the rise in cases on state reopening too soon, particularly in southern and western states.

‘If you open when cases are still increasing, as many states did, it’s like leaning into a left hook,’ Frieden said. ‘You’re going to get hit hard. And that’s what’s happening.’

Frieden also warned that numbers will only get worse for weeks before they get better, because the new measures being implemented will take time to be effective.

Health and Human Services (HHS) Secretary Alex Azar issued his own ominous warning Sunday, insisting the ‘window is closing’ to stop the spread of coronavirus.

Azar however dismissed the idea that the surge in cases is tied to states reopening and lifting restrictions put in place to mitigate the spread of the coronavirus.

‘This isn’t about reopening or not reopening. We’ve got many communities in states that are just as reopened as these southern states but aren’t experiencing this,’ Azar said.

‘We’ve got to get to the bottom of why we’re seeing these cases surge in this area, but at its core, we all own as individuals, our individual behavior to make sure that we are practicing appropriate social distancing and wearing facial covering when we’re not able to, and practicing good personal hygiene and especially protecting our most vulnerable citizens.’

Among the rise in hospitalizations in the south and west, New York Governor Andrew Cuomo announced Sunday that his state – once the county’s epicentre – has posted its lowest death toll and hospitalization figures since the pandemic began.

Five deaths were reported Saturday, the lowest single day death number since March 15. The death toll is now at 24,830.

An additional 616 cases were confirmed, bringing the statewide total to 392,539. Hospitalizations continued to drop (now below 900) and 0.99% of Saturday’s COVID-19 tests were positive.

New York City Mayor Bill de Blasio said the Big Apple is on track for Phase 3 of reopening to begin on July 6.

Some 50,000 workers are expected to return to work in the city in Phase 3, de Blasio said.

Connecticut and Rhode Island were the only two states to report a decline in new coronavirus cases.

An additional 9,077 tests were performed, and 97 came back positive. Hospitalization also decreased by three to 103.

Lamont announced earlier this week that his state plan for a full-time, in-school education framework in the fall, as long as public health data continues to support the model.

While Connecticut has determined reopening schools for in-person instruction can be achieved based upon the state’s successful COVID-19 containment efforts, this model will be supported with more intensive mitigation strategies and specific monitoring, containment, and class cancellation plans.

Rhode Island’s first phase of reopening started on May 9, after Gov. Gina Raimondo said that cases and hospitalizations had held steady for two weeks, with a 25 percent drop in new cases in that time frame.

Since then, average new cases have continued to decline, with hospitalizations dropping below 100 on Friday.