Floridians kicked off a weekend of partying at sea as the Sunshine State records its deadliest week on record after Gov Ron DeSantis gave the order to start phase one of the reopening process.

Dozens of boats were spotted on a sandbar near John’s Pass as thousands of people flocked to area beaches during the first weekend public beaches reopened after they were closed a few weeks ago in a bid to stop the spread of COVID-19.

On Sunday, people were seen dancing, drinking and sharing a hookah on the deck of one yacht in Biscayne Bay in Miami. Dozens more were seen waiting in a massive line near a marina in Miami, which is one of three epicenters of the virus in the state.

On Sunday, Florida reported that about 40,596 coronavirus cases have been confirmed since the beginning of March and at least 1,721 people have died.

According to the Florida Department of Health, there were 595 new cases reported between Saturday and Sunday. Since the state began to reopen on May 4, Florida has seen an average of 55 new deaths every day. 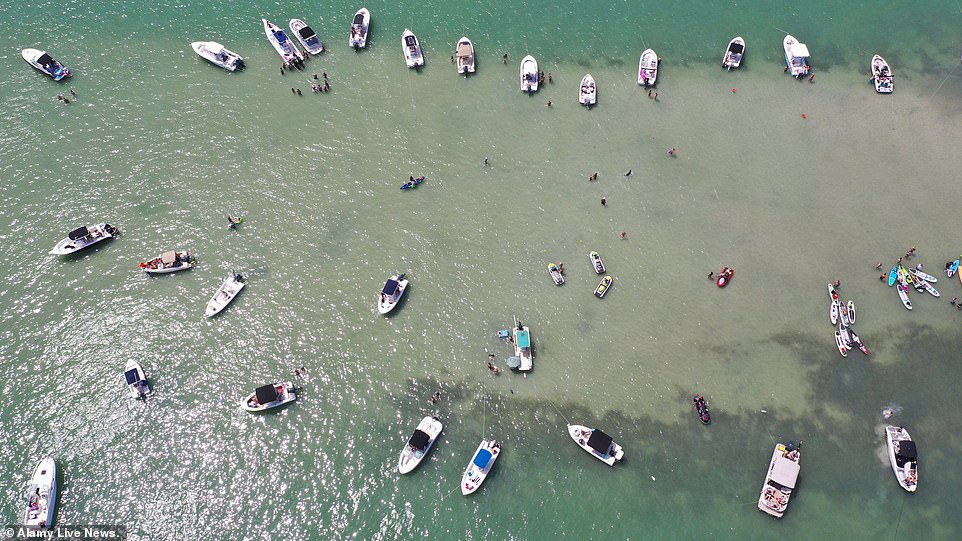 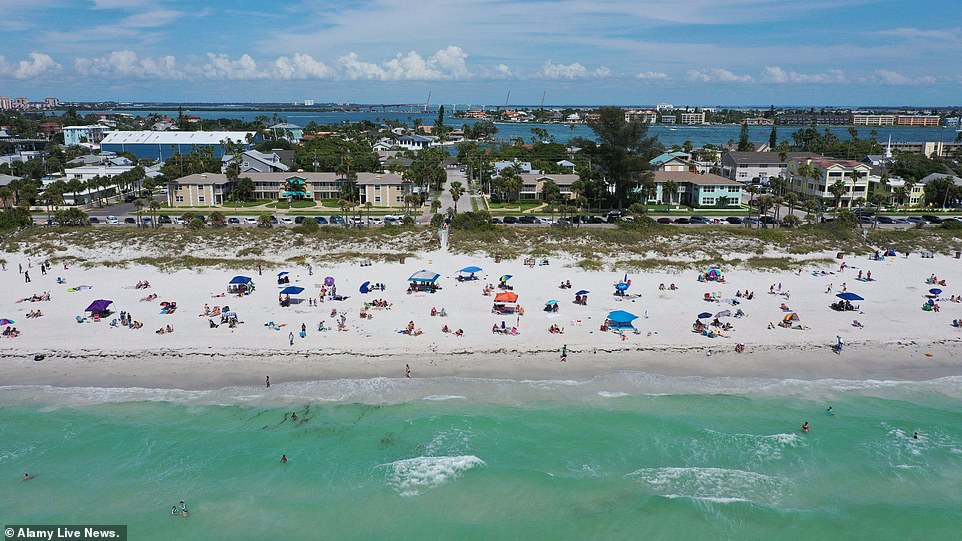 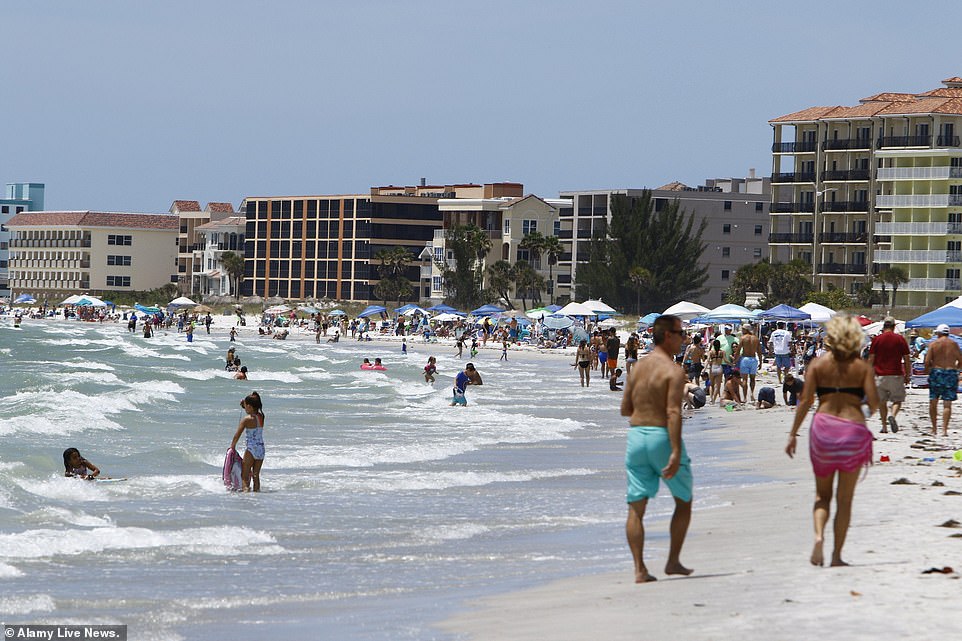 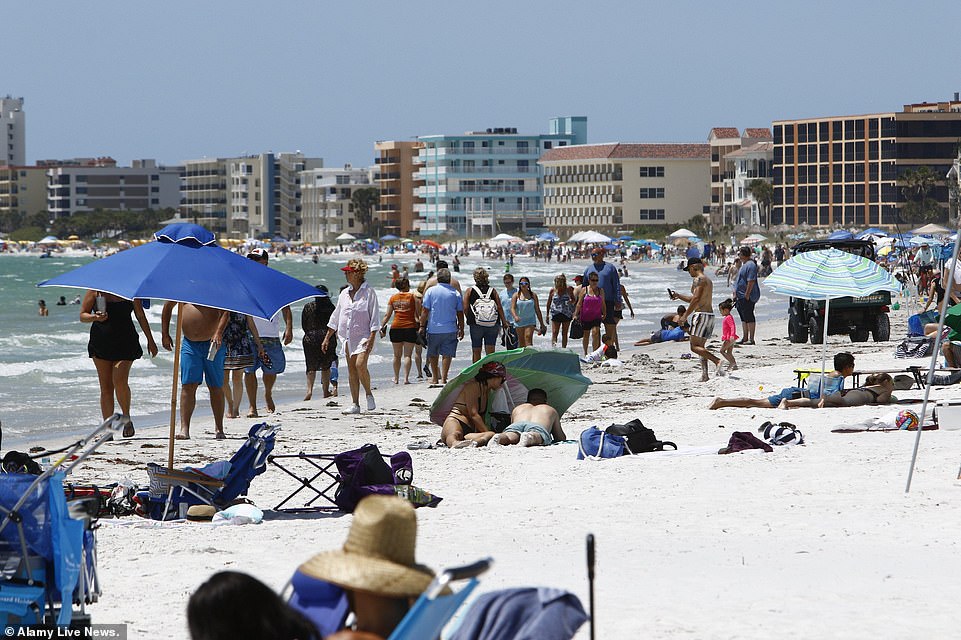 On Sunday, Florida reported that about 40,596 coronavirus cases have been confirmed since the beginning of March and at least 1,721 people have died. Families are seen walking along Madeira Beach on Saturday 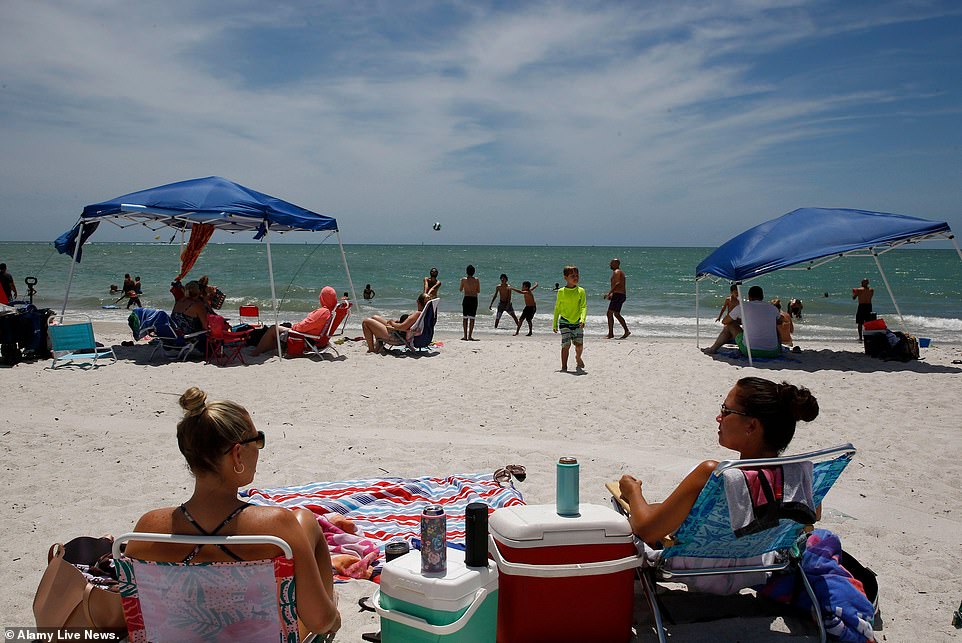 According to the Florida Department of Health, there were 595 new cases reported between Saturday and Sunday. Families are seen hanging out at the beach on Saturday 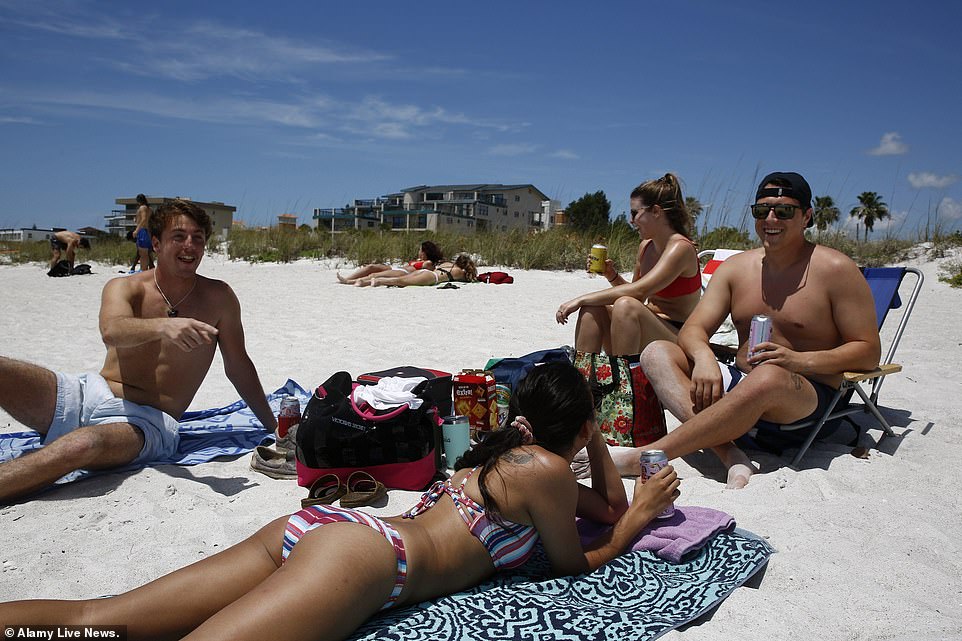 Since the state began to reopen on May 4, Florida has seen an average of 55 new deaths every day. Two couples are seen hanging out at Madeira Beach on Saturday

In other parts of Florida, one beach was forced to close because officials said visitors were not practicing social distancing and could have contributed to the spread of the virus.

Officials in Naples on Florida’s southwest coast said that the crowds on Saturday were packed too tightly together, so they decided to close beaches until a city council meeting can be held Monday to discuss solutions.

Councilman Gary Price went to the beach Saturday after learning about the crowds and took photos of people not obeying rules that require groups to remain apart.

‘It’s pretty sad,’ he told the Naples Daily News. ‘It’s such a popular place. We’ll figure it out. We are doing this to keep people safe. We are erring on the side of caution.’

Several residents told the newspaper that the beach should remain open, but limited to local residents.

‘Not fair that Collier County residents cannot enjoy their beaches,’ Lauren Cibelli told the paper on Facebook. ‘I was at the beach during the week, and everyone practiced social distancing. This is not right that residents suffer.’

Beaches in most of the state reopened last week except in South Florida, but some beaches reopened back in April.

According to officials in the city of Cocoa Beach, people have left more than 13,000 pounds of trash at Cocoa Beach, which reopened on April 21, within just one weekend.

Officers from the Cocoa Beach Police Department said in a press statement that people who litter at the beach will pay a fine of $250.

‘As restrictions are becoming more relaxed during this pandemic, the City of Cocoa Beach is beginning to see an influx of day-trippers to our beaches, along with piles of unlawfully discarded trash in their wake,’ the department said on Facebook. ‘This will not be tolerated.’ 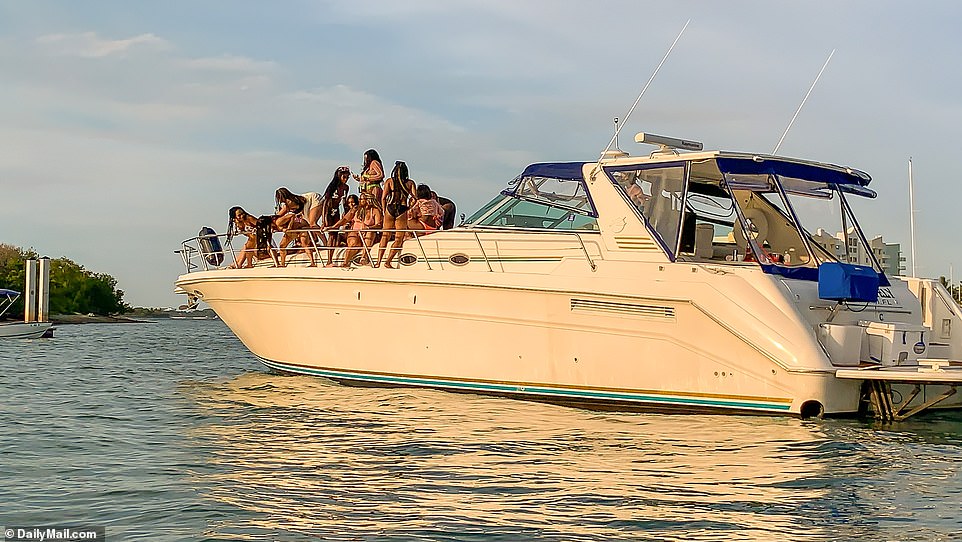 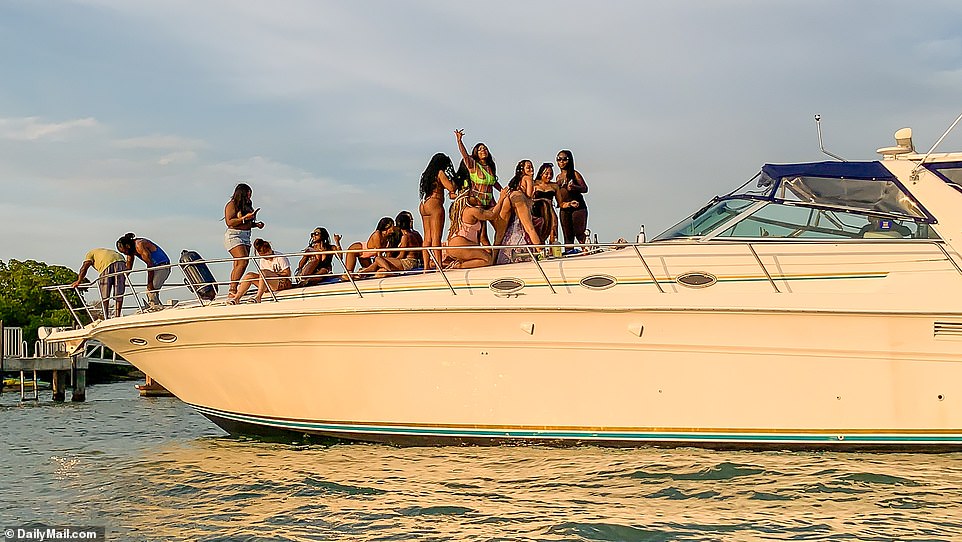 People were seen dancing, drinking and sharing a hookah on the deck of one yacht in Biscayne Bay in Miami amid the coronavirus pandemic on Saturday 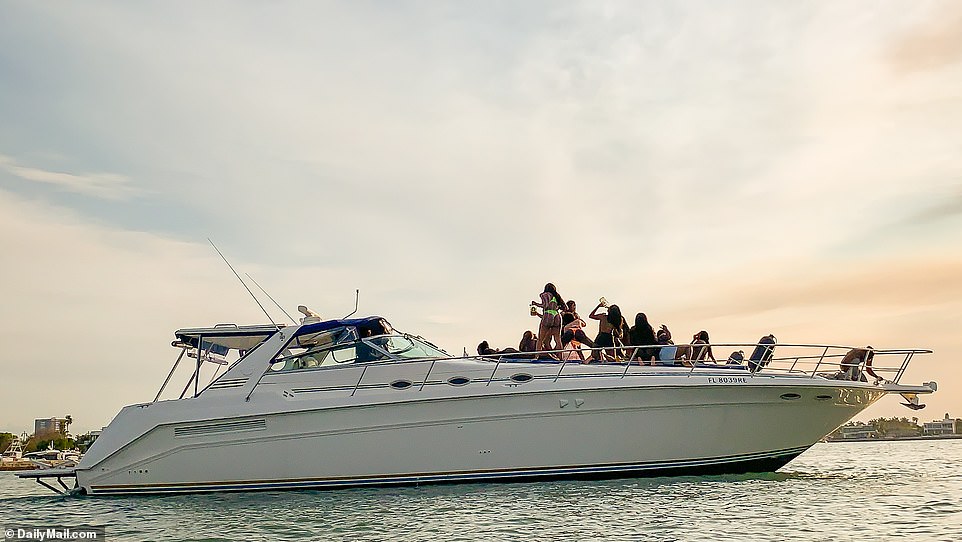 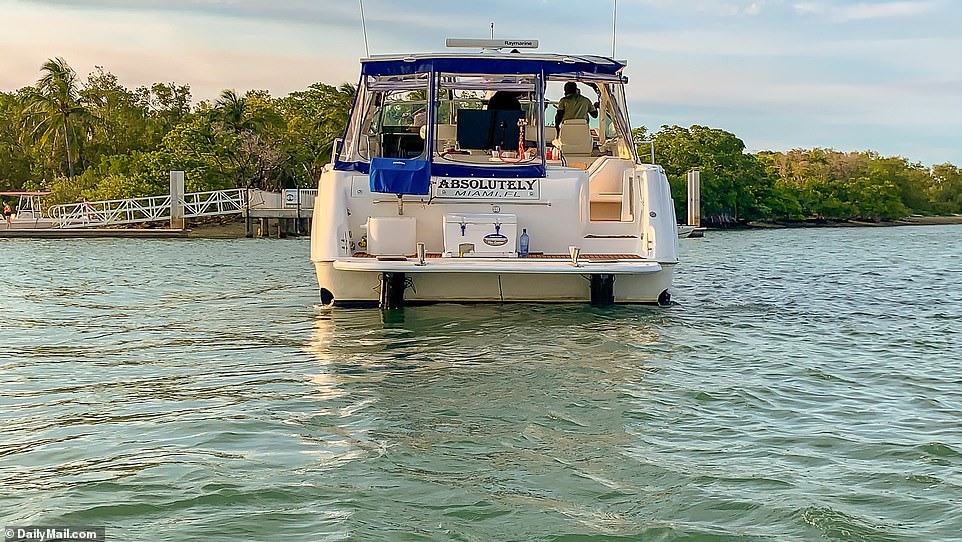 Miami-Dade County, where Biscayne Bay is located, will start reopening businesses during the week of Memorial Day

Meanwhile, barbershops, hair salons and nail salons prepared to reopen in much of the state Monday with workers being required to wear masks.

Gov Ron DeSantis announced Friday that they could reopen in every county except hard-hit Miami-Dade and Broward, which remain under tight restrictions.

The governor said he hopes Miami-Dade and Broward counties can start reopening businesses during the week of Memorial Day.

The shops will have to operate by appointment only and will have to spend 15 minutes after each customer disinfecting the station. They are being discouraged from allowing customers to wait inside.

Restaurants and shops in Palm Beach County can reopen provided they keep indoor capacity at 25 per cent starting May 18.

‘In order for Florida to come back, we need Palm Beach County in a leadership role,’ DeSantis said at a news conference in West Palm Beach.

With some of the nation’s most expensive houses, Palm Beach County is home to Mar-a-Lago, which serves as Trump’s refuge from Washington.

The president often spends his time there mixing work, business and pleasure in the company of dues-paying members. It has laid off 153 workers during the pandemic. 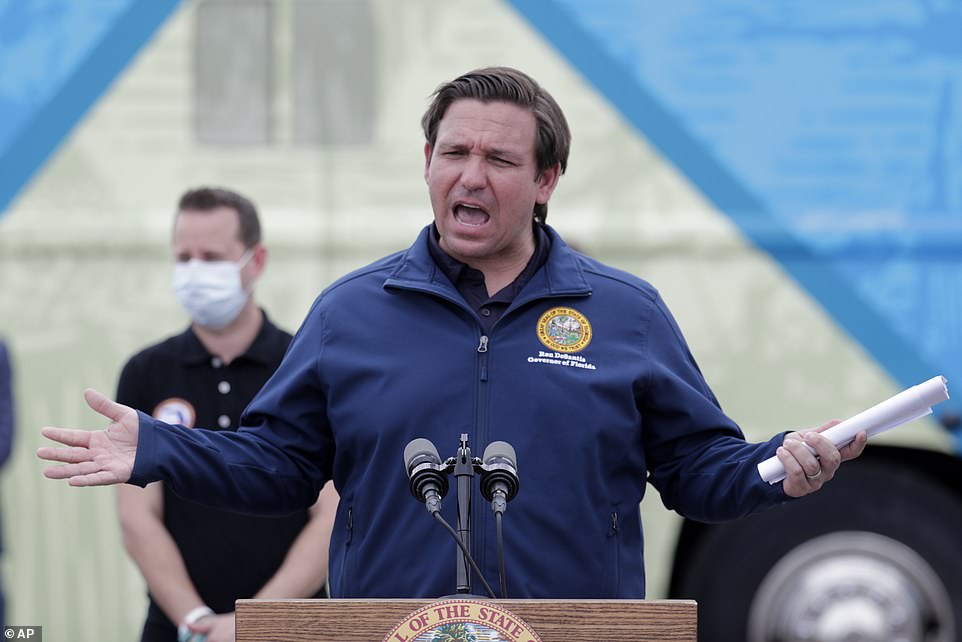 Gov Ron DeSantis announced Friday that certain businesses could reopen in every county except hard-hit Miami-Dade and Broward, which remain under tight restrictions 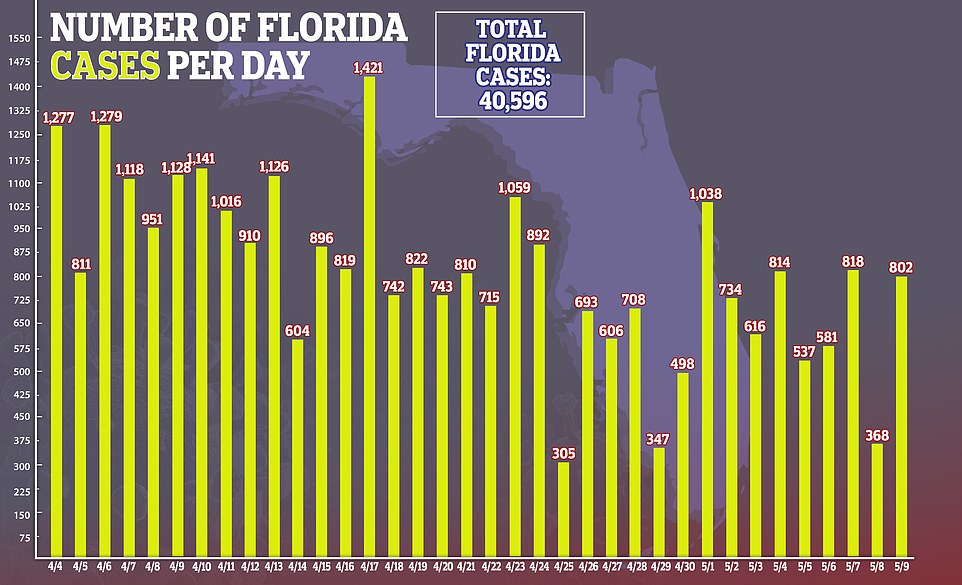 On Sunday, Florida reported that at least 40,000 coronavirus cases have been confirmed since the beginning of March 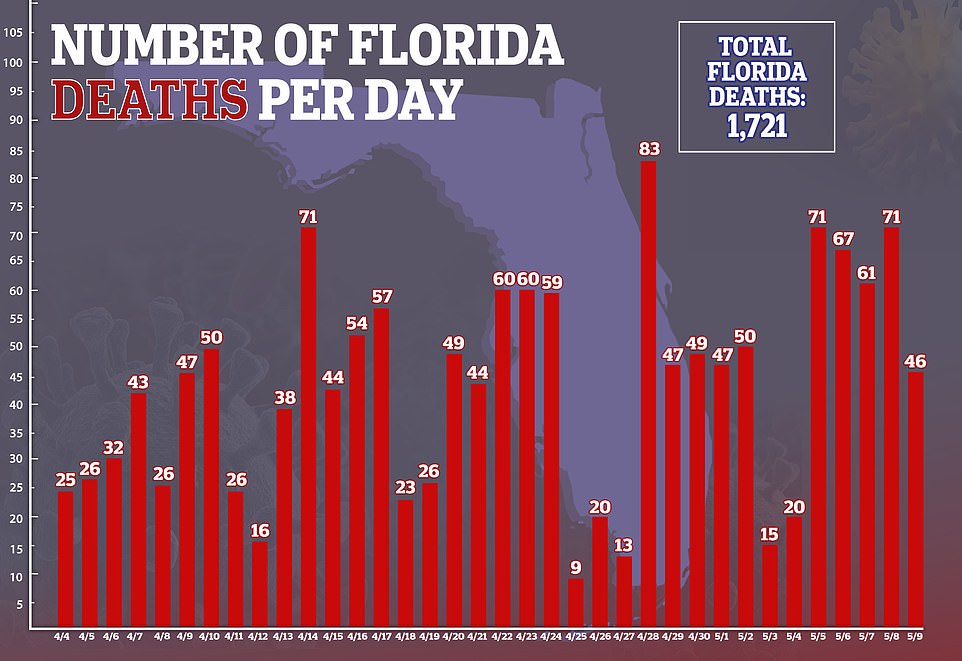 Florida has recorded at least 1,721 deaths (depicted above) as of Sunday night 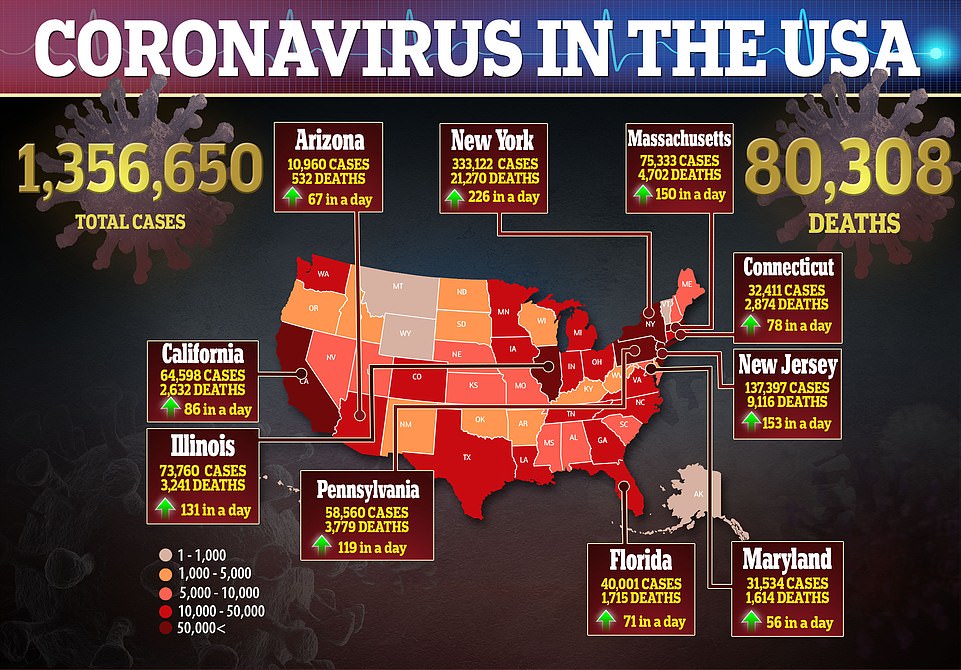 There are more than 1.3 million coronavirus cases in the US with at least 80,308 deaths 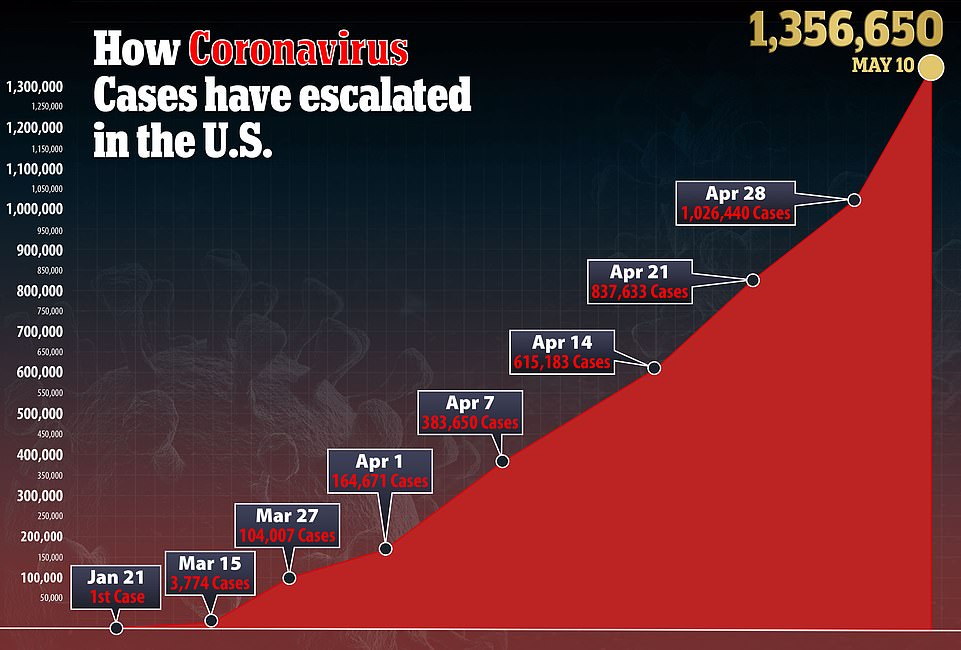 While Broward and Miami-Dade counties remain under restrictions, Miami-Dade Mayor Carlos Gimenez announced Friday that some business in the county would be opening on May 18. He didn’t specify which businesses but suggested the reopening could include restaurants.

In a survey completed by city leaders, most supported the opening of restaurants and retail businesses under the state’s guidelines, as well as allowing elective surgeries.

DeSantis also gave the green light to reopen hair salons, barbershops and nail salons Monday under new safety guidelines for most of Florida.

The order does not include Miami-Dade and Broward counties. The governor made the announcement on Twitter late Friday via a video message from J. Henry, who owns a barber shop in Orlando.

‘We are ready to get back to work and make some money,’ Henry said in the video, adding that salon employees would be wearings gloves and masks. ‘Safety is always first.’

No other details about the additional safety protocol were immediately released.

Last week, most of Florida’s Democratic congressional delegation urged DeSantis, a Republican, not to loosen restrictions meant to stop the spread of the coronavirus until he can put in place adequate testing, contact tracing and the ability to isolate sick residents.

The US lawmakers said in a letter to the governor that Floridians would be at risk without those measures in place as businesses that have been closed because of the pandemic start to reopen.

‘While we fully recognize the tremendous burden placed on the economy by stay-at-home orders and closed businesses, we urge you to prioritize the health and safety of Floridians above all else,’ the letter said.

‘A rushed reopening may very well serve only to increase the human loss caused by an already historic public health crisis, as states moving forward with reopening are seeing increases in new COVID-19 cases.’

DeSantis defended his approach on Friday as ‘safe, smart’.

‘We are being deliberate,’ DeSantis said. ‘We are being methodical about this because we want to do this the right way.’

At a news conference in northeast Florida, DeSantis also announced that infected patients from long-term facilities who do not require hospitalization could be cared for at a skilled nursing facility in Jacksonville.

He said that will help prevent infected elders from spreading the disease to others in their facility.

The governor also defended the state’s response to the coronavirus pandemic, saying state officials acted to stay ahead of infections by aggressively seeking to stem the spread of the virus across the state’s elder care facilities.

According to records released by state officials, there have been more than 1,400 infected long-term care residents across 424 long-term care facilities as of May 1.

More than 400 have died, according to those records.

‘We acted decisively early on to protect long-term care facilities,’ the governor said.

DeSantis said that included sending nearly 10 million masks, 1 million gloves and 500,000 face shields to long-term care facilities, as well as establishing what he called ‘strike teams’ to do surveillance testing at the facilities.

But the data released by state officials have come under scrutiny because some of the data do not square with other available information.