Thousands of protestors gathered in the streets of Tel Aviv, Israel on Saturday  to protest against the Israeli government’s handling of the coronavirus pandemic.

The demonstrators were complaining about the curbs taken by the government which has led to several job losses in a variety of sectors, while small and self-employed business are angry over a failure to deliver financial aid that was promised to them by the government.

Around 300 police officers were called to the city’s Rabin Square to manage the situation and maintain social distancing, though the majority of protestors were conforming to the two-metre regulations and wearing face coverings. Protest organiser Shai Berman told Israel’s public radio: ‘There is a very grave crisis of confidence between us and the government.

‘We are part of a very large public which is feeling growing distress and wants to demonstrate and simply does not believe the promises.’

Demonstrators held up banners saying ‘Let Us Breathe’ echoing statements made during the Black Lives Matter protests following the death of George Floyd in the United States. Protests held up several banners in the city square, including some which said ‘Let Us Breathe’ 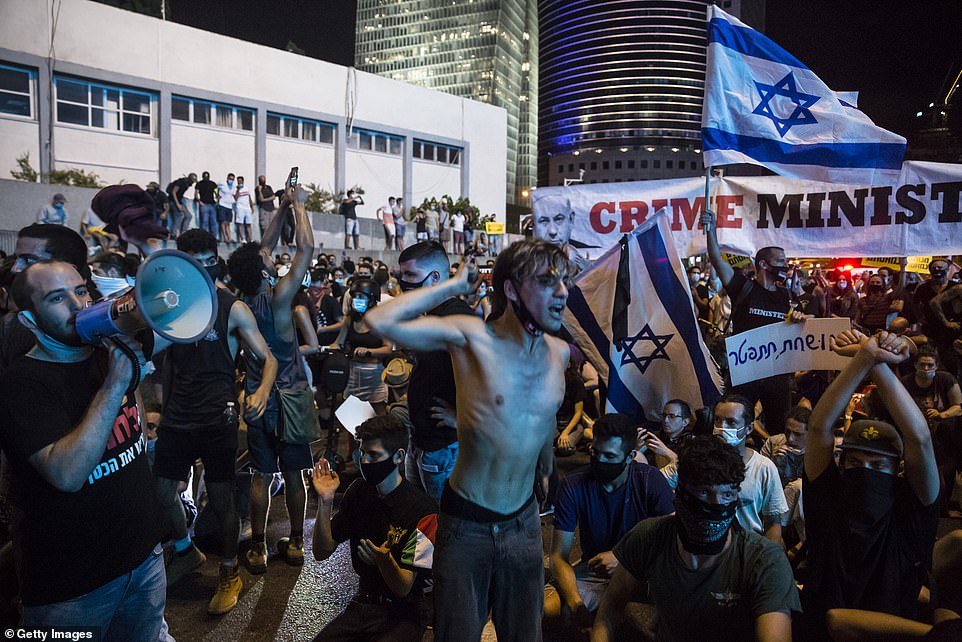 The country has suffered several job losses since the country went back into lockdown after restrictions were eased in May, with the leisure and entertainment sectors badly hit Student unions also attended the protest as many young people have been forced out of work by the pandemic. Performing arts groups were also present as the leisure and entertainment sectors have been hit hard by the crisis.

Following calls to improve public life and the country’s economic situation, Israel lifted some lockdown restrictions in May after a month-and-a-half in strict lockdown.

However, the country was forced to retract certain relaxations as infections rose once again. Public pools, bars, nightclubs, gyms and event venues were forced to close as a result. 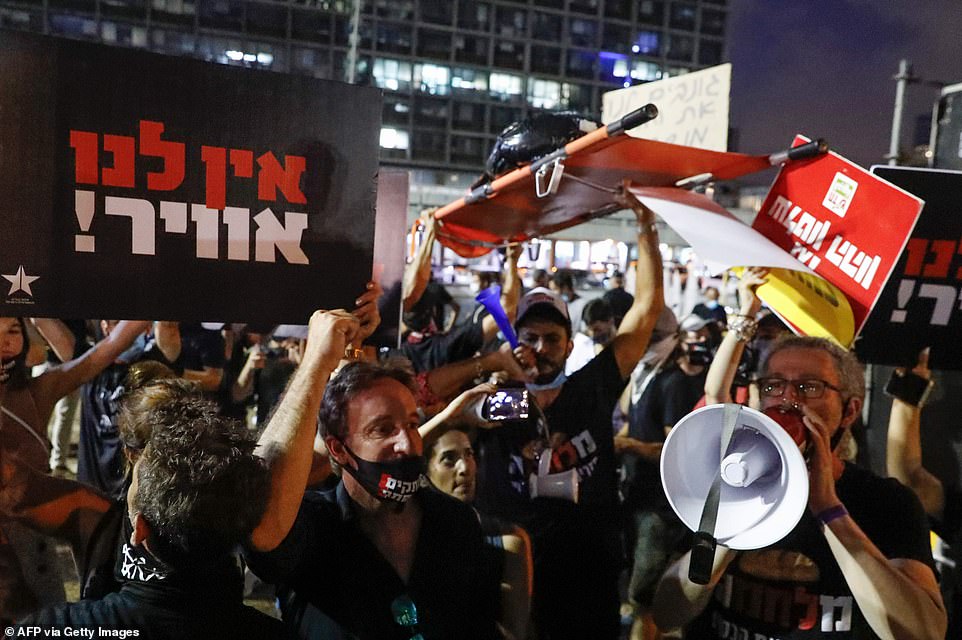 A protest organiser claimed there was a serious lack of confidence between the people and the Israeli Goverment, led by Benjamin Netanyahu (pictured on placard) On Friday, Israel recorded 1,500 new COVID-19 infections, the highest daily total the country has faced since the global pandemic began

The country’s Prime Minister, Benjamin Netanyahu, told activists: ‘We will meet our commitments including hastening the immediate payments that we want to give you.’

Israel recorded 1,500 new infections on Friday, the highest number of daily cases registered so far by the country.