Thousands more Americans may be living with undiagnosed HIV than before Covid struck, official figures have suggested, in a warning sign the devastating virus is spreading again in the United States.

The annual surveillance report from the Centers for Disease Control and Prevention (CDC) reports new diagnoses fell by about two percent every year since 2016. But in 2020, the latest available data, they tumbled 17 percent to 30,000 new cases — which was 5,000 fewer than would be expected based on previous trends.

At the same time the number of CDC-funded swabs for the virus fell by half from 2.4 to 1.2 million, one of the lowest numbers on record, leading officials to fear many cases have gone unnoticed.

In its report the agency said the ‘steep reduction’ in new cases was ‘likely due to disruptions in clinical care, patient hesitancy… and shortages in HIV testing reagents/materials’. Bruce Packett, director of American Academy of HIV medicine, told DailyMail.com it was ‘very likely’ thousands of cases had been missed.

He warned that — in line with other sexually transmitted diseases — cases of HIV may now be ‘level’ or ‘even increasing’, in a reversal of the gradual decline since for the past four years. The CDC warns other STIs like gonorrhea and syphilis may already be at record highs.

America is currently aiming to eradicate the transmission of HIV in just eight years, but experts say although this was the ‘right’ target efforts to hit it have been ‘set back’ by the pandemic.

The above graph shows the number of HIV cases declined every year since 2016. It reveals they had dropped by about two percent a year until 2020, when they fell 17 percent. The CDC warned this major drop was likely down to a fall in testing 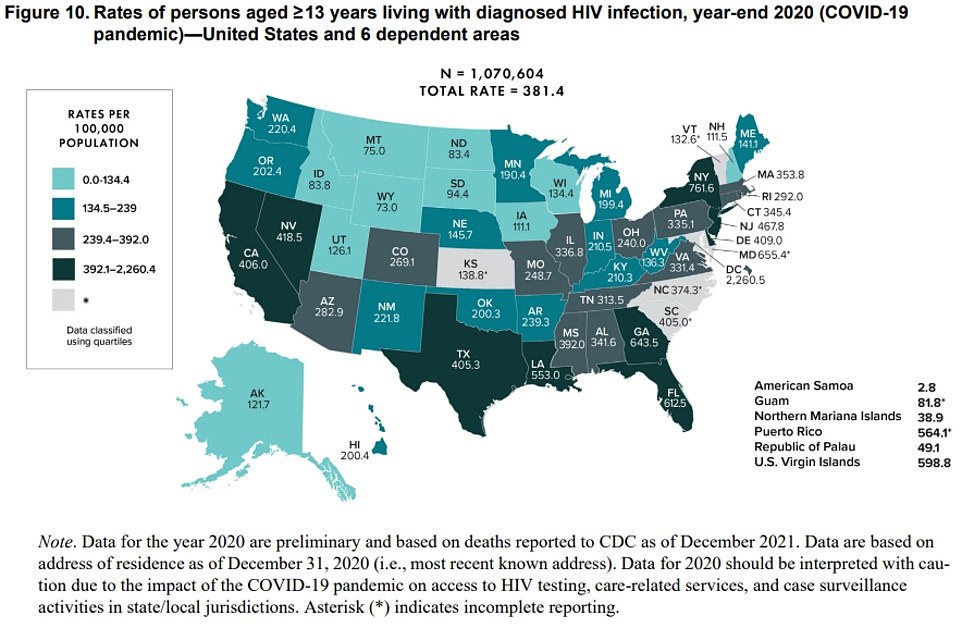 The above map shows the proportion of people infected with HIV across every state in America. It reveals case rates are highest in New York, Georgia and Florida

More than eight in ten infections recorded in 2020 were among men, official data from the CDC’s annual report shows 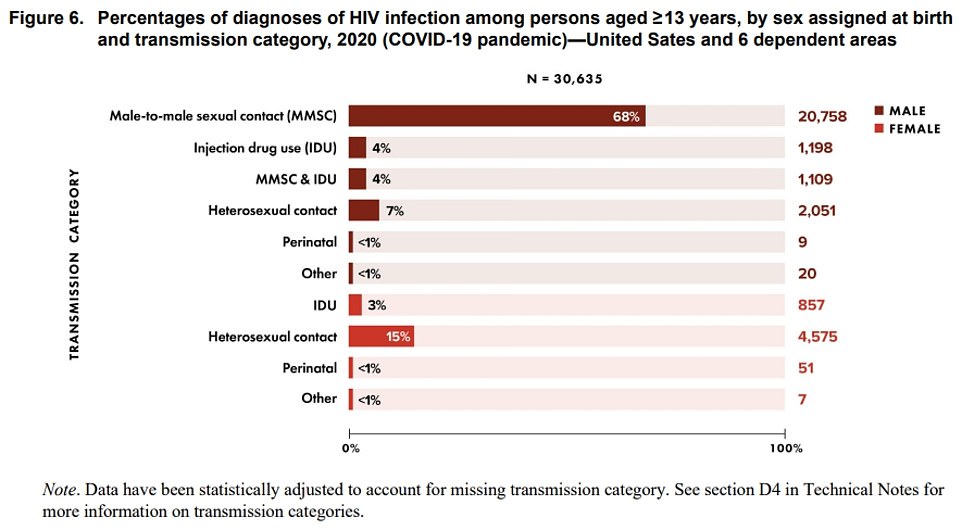 It also revealed more than six in ten cases were down to men having sex with other men, followed by heterosexual contact

The above shows that most new cases have been diagnosed among people aged 25 to 34 years old, followed by those in the 13 to 24 and 35 to 44 years categories

HIV (human immunodeficiency virus) is a virus that damages the cells in your immune system and weakens your ability to fight everyday infections and disease.

AIDS (acquired immune deficiency syndrome) is the name used to describe a number of potentially life-threatening infections and illnesses that happen when your immune system has been severely damaged by the HIV virus.

While AIDS cannot be transmitted from 1 person to another, the HIV virus can.

There’s currently no cure for HIV, but there are very effective drug treatments that enable most people with the virus to live a long and healthy life.

With an early diagnosis and effective treatments, most people with HIV will not develop any AIDS-related illnesses and will live a near-normal lifespan.

The annual report on HIV cases pulls together data from all 50 states and U.S. territories. It is dated back to 2020 to allow a 12-month lag for infections to be reported.

About 1.07 million Americans are currently living with a diagnosed case of the disease, equivalent to about one in 300 people.

The CDC did not estimate the total number of people infected this year due to a lack of testing, but previous surveillance reports have put the tally at about 1.2 million.

More than eight in ten infections diagnosed last year were in men, with about seven in ten also linked to men having sex with other men.

More than four in ten new cases were in Black/African Americans.

When asked about the CDC’s latest figures, Packett told DailyMail.com: ‘I think it is very likely that they have missed diagnoses in the thousands.

‘With the pandemic, it is possible that new diagnoses numbers may even be level of increasing now.

‘I don’t know for sure, but I think given what we saw and the amount of patients who went off PrEP it is entirely possible that there were still risk events in 2020, despite the patients themselves reporting a decrease in encounters.’

He said in response to the report that the CDC will now likely aim to ramp up its testing for the virus, including hitting the aim of routinely testing people for the disease between the ages of 16 and 65.

Despite lockdowns and curbs to stop the spread of the virus in 2020, America saw its cases of gonorrhea and syphilis surge to a 30-year high in 2020.

Surveillance also found total cases had hit 2.4 million, down slightly from 2.5 million the year before. But health chiefs said this was likely down to a lack of testing and warned cases could in fact have hit a year high.

Jonathan Merin, the CDC’s director for STI prevention, warned at the time that the ‘unrelenting momentum’ of the nation’s STD epidemic had continued throughout the first year of the pandemic. 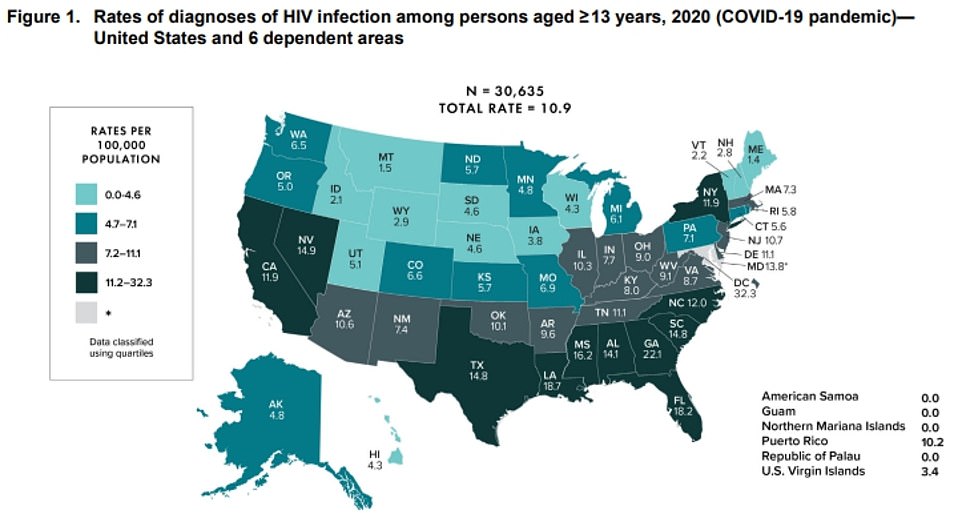 Human immunodeficiency virus (HIV) spread to people from chimpanzees in the 1950s and sparked a major epidemic two decades later that is still ongoing today — with millions having lost their lives.

New cases only began to decline sharply in the 1990s with the advent of testing for the virus and medications to suppress viral load. The arrival of PrEP in 2012 — which can stop someone who has the virus from passing it on to others — further limited its spread.

Former President Donald Trump launched a strategy to end the transmission of AIDS in the U.S. in 2019, called the Ending the HIV Epidemic in the U.S. (EHE) strategy.

It had another $140 million injected into the project in 2020 to back new treatments and testing strategies, taking its budget to as much as $948 million a year.

The project aims to cut HIV transmission by at least 75 percent come 2025, and slash it to below 90 percent by 2030 compared against current levels.

But many experts fear it has got off to a slow start due to the Covid pandemic, which saw many resources redirected to helping battle this virus.

Usage of PrEP has risen only slightly in recent years, with about 25 percent of ‘high-risk’ people using it in 2020 compared to 23 percent over the previous three years.

About 68 percent of people with HIV are actually receiving medication to suppress the virus, CDC statistics also show, compared to about 90 percent in the UK, Australia, Sweden and other western nations.

HIV is spread through sharing blood with others, normally through sex.  It attacks the immune system, eventually leading to AIDS when someone dies from infections and illnesses that the body can no longer fight off.

Measures to prevent infection include using a condom during sex, and taking anti-virals to reduce the viral load to undetectable levels. Many infected people can now live with the disease thanks to advances in treatment.

Mississippi is the nation’s chlamydia and gonorrhea capital — while Nevada has the most syphilis cases per capita, official figures reveal

Mississippi is chlamydia and gonorrhea capital of the U.S. — while Nevada has the most syphilis cases per capita, official figures reveal.

Cases of common sexually transmitted diseases (STDs) hit record highs across America during the first year of the pandemic, despite normal testing being interrupted by Covid.

The outbreak was biggest in the Magnolia state thanks to a stigma around getting tested for the diseases and admitting to an infection, an epidemiologist in its department of health told DailyMail.com.

They added that poor healthcare coverage — leading many to put off getting tested — and rising rates of drug abuse were also fueling infection levels.

In Nevada, STD prevention workers have blamed that state’s growing hook-up culture leading to more anonymous sex via dating apps for higher rates of syphilis. More testing and less condom use were also considered to be attributing to the spread.

The figures for America’s 50 states come from the Center for Disease Control and Preventions (CDCs) annual surveillance report for 2020, the latest available.

Overall, cases of the three STDs detected dropped slightly to 2.4 million in the first year of the COVID-19 pandemic compared to the previous 12 months. But CDC officials warned this was likely due to a drop in testing, which had masked a real-terms rise in infections across the board. 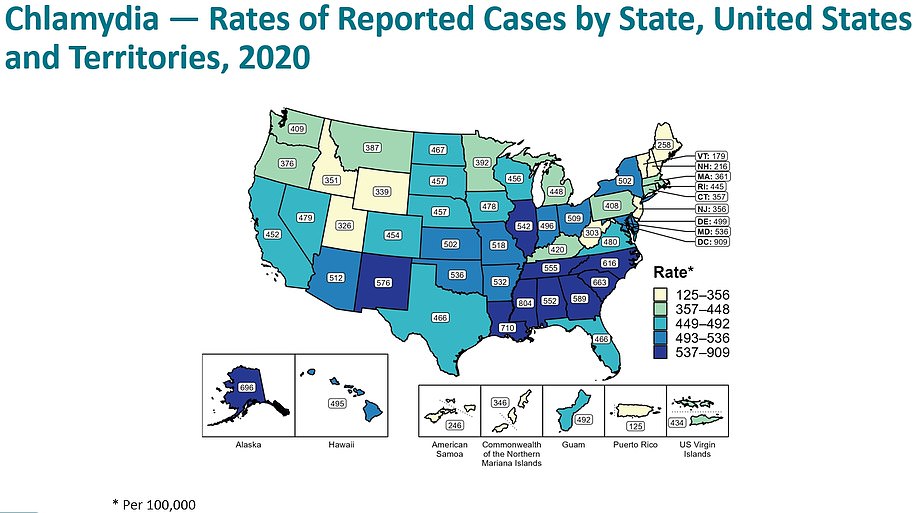 The above map shows cases of chlamydia per 100,000 people across the 50 states of the U.S. and territories. It reveals that Mississippi has the highest case count for the sexually transmitted disease out of all states