Thousands of Americans gather to honor troops on Veterans Day

Thousands of Americans gathered across the country to honor troops on Veterans Day today – the federal holiday honoring fallen soldiers which is observed on November 11 every year – the 11th day of the 11th month.

President Biden is in Egypt for a United Nations climate conference, so in Virginia Vice President Kamala Harris took to the stage to address crowds gathered at Arlington National Cemetery.

In a somber ceremony Harris placed a wreath at the Tomb of the Unknown Soldier, dedicated to deceased service members whose remains have not been identified.

She told crowds how the country was indebted to veterans for their service, ‘every day, through your life’s work and your example, you make America stronger,’ she told the nations veterans.

‘On Veterans Day, we come together to express our profound gratitude for all you have done and you continue to do.’

Harris took the opportunity to announce new support for children who live with wounded service members.

The initiative, known as the Hidden Helpers Coalition, helps young people who act as caregivers and was introduced by first lady Jill Biden.

Harris said the nation owes soldiers a great debt and that the Biden administration was working to deliver on help with housing, health care and jobs.

‘As Americans, we have a sacred obligation to take care of our veterans and our military families,’ she said.

‘Fulfilling that obligation means making sure veterans can access the support and resources they need to thrive.’ 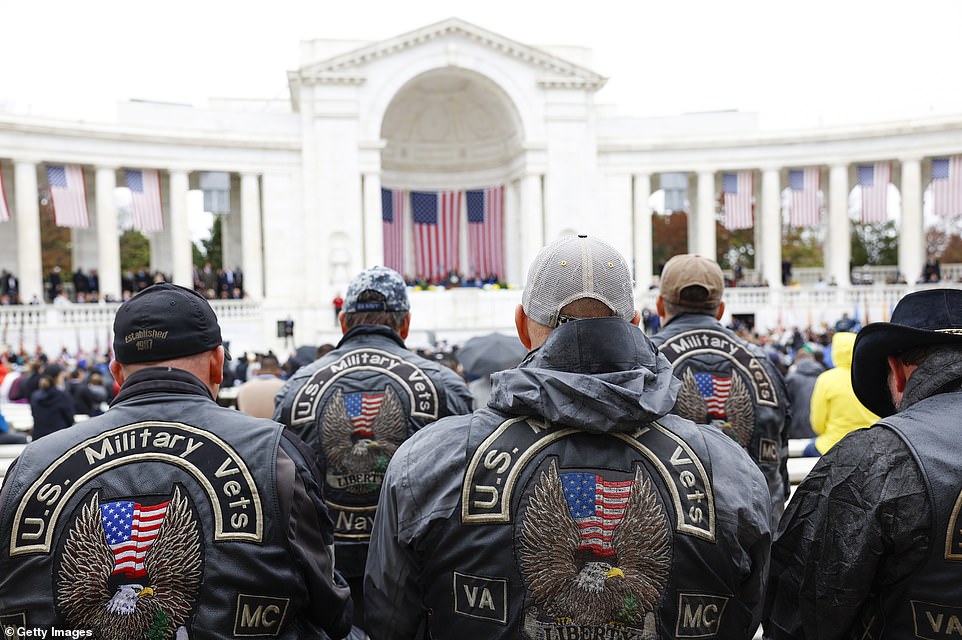 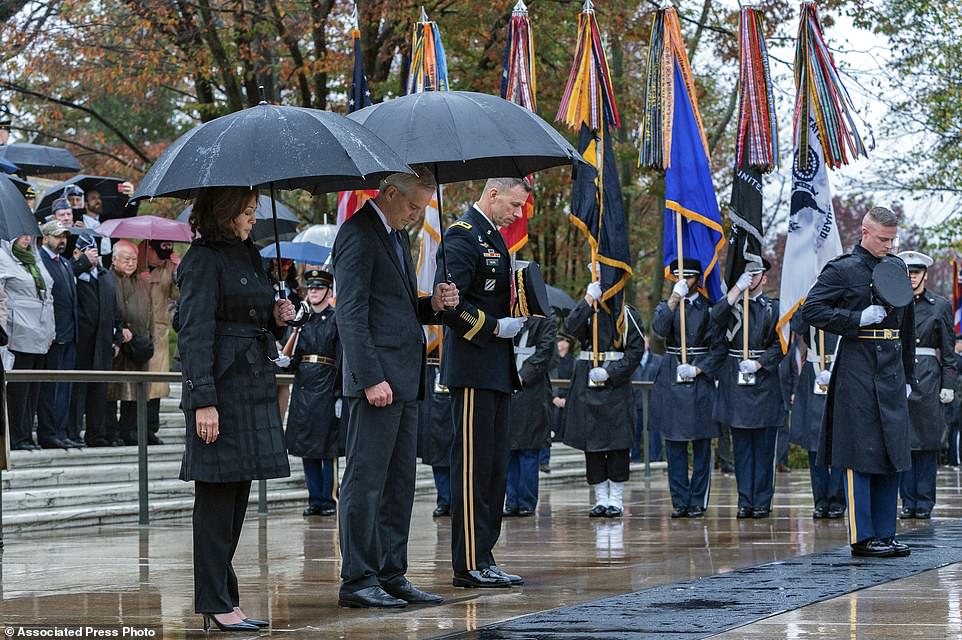 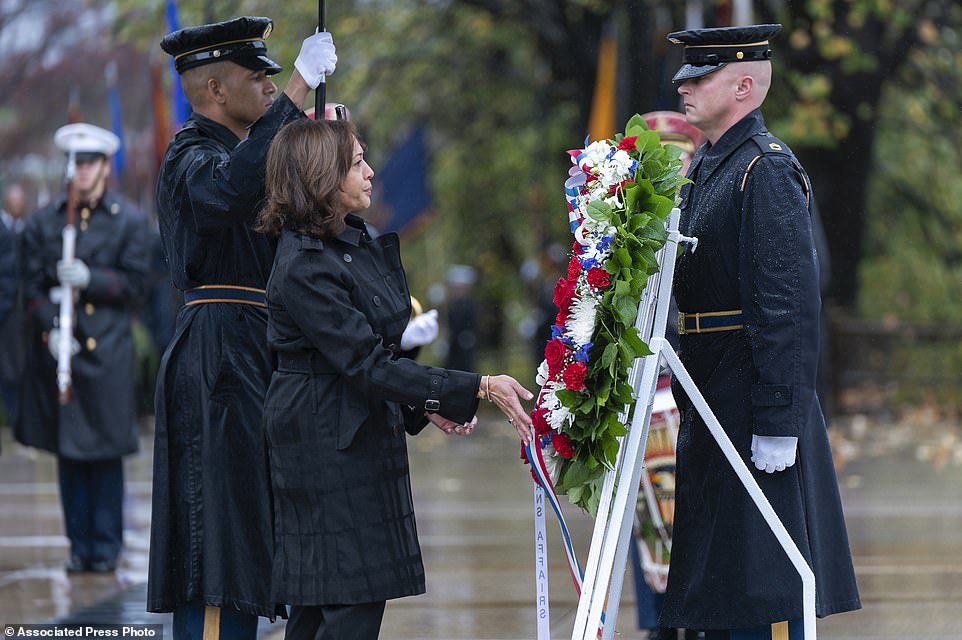 ARLINGTON, VIRGINIA – Vice President Kamala Harris lays a wreath at the Tomb of the Unknown Soldier 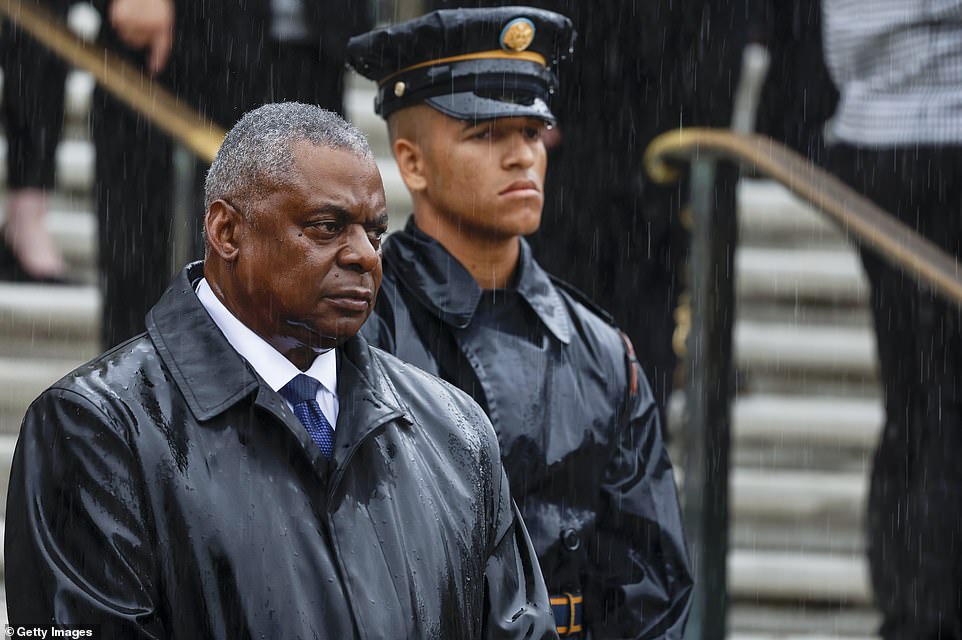 ARLINGTON, VIRGINIA – U.S. Secretary of Defense Lloyd Austin awaits the arrival of U.S. Vice President Kamala Harris at the Tomb of the Unknown Soldier in the Arlington National Ceremony 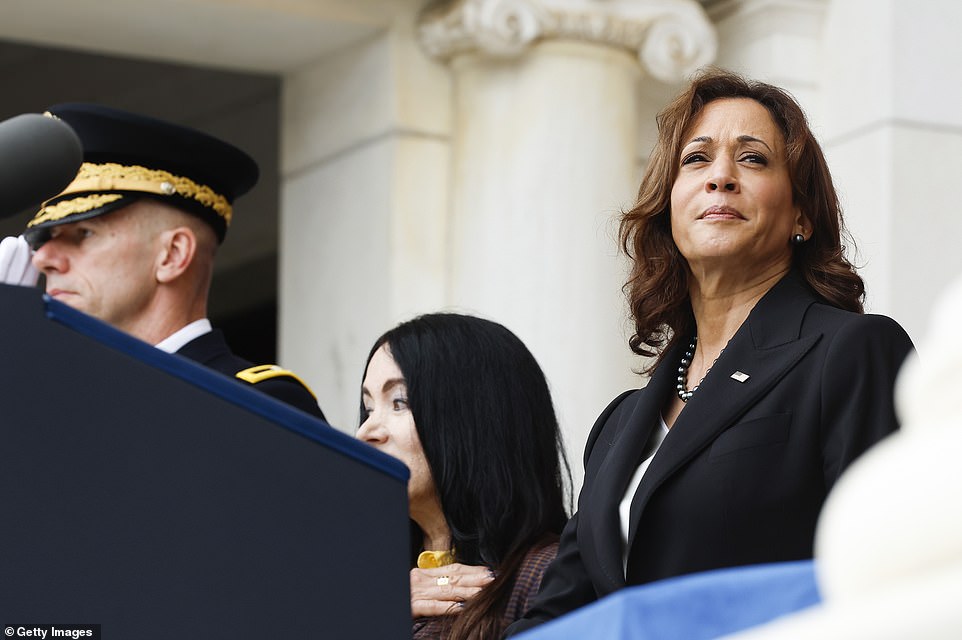 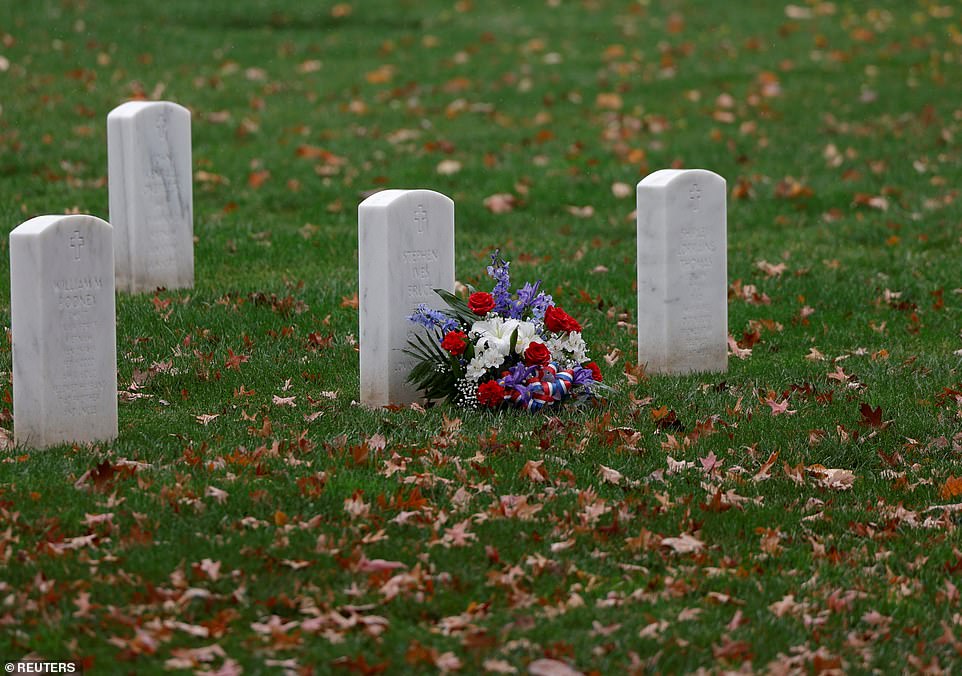 ARLINGTON, VIRGINIA – Flowers are left by a headstone at Arlington National Cemetery on Veterans Day, in Arlington, Virginia

Thousands of people braved the rain in New York City for its own veterans day parade.

Before the parade, Mayor Eric Adams and Vincent Patton, this year’s grand marshal, took part in a wreath laying ceremony at the Eternal Light Flagstaff in Madison Square Park, which started around midday.

The first Black Master Chief Petty Vincent Patton, Officer of the US Coast Guard, was named Grand Marshal of the parade.

Patton served for 30 years in the US Coast Guard.

‘This isn’t about me. I’m the Grand Marshall but I’m representing every veteran in this country, 17.4 million to be exact,’ Patton told CBS New York before the parade.

To the city of New York, thank you for thanking us. I’m here to represent all of our veterans out there and appreciate the offering of thanks that you give us.’ 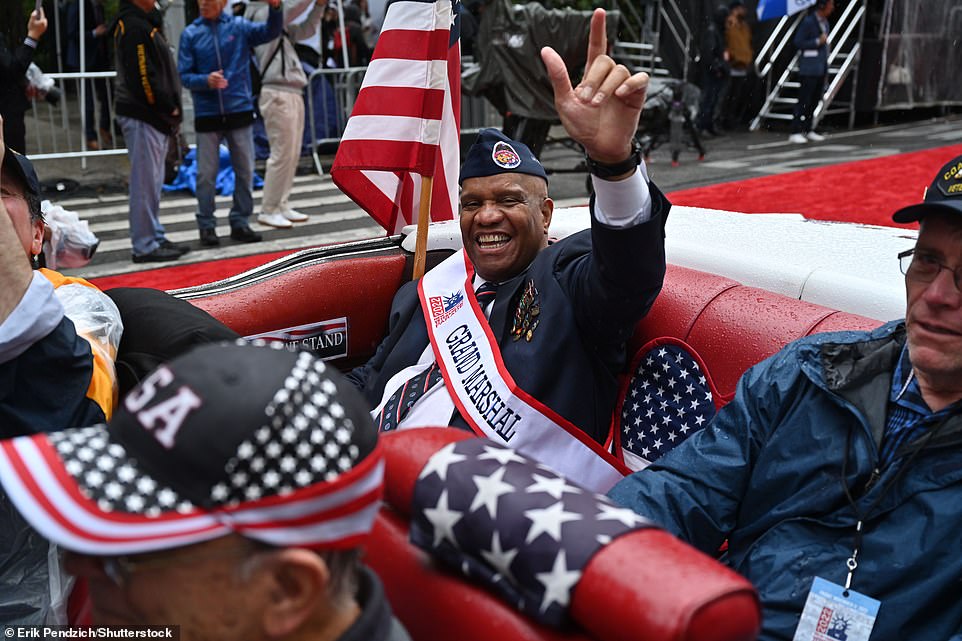 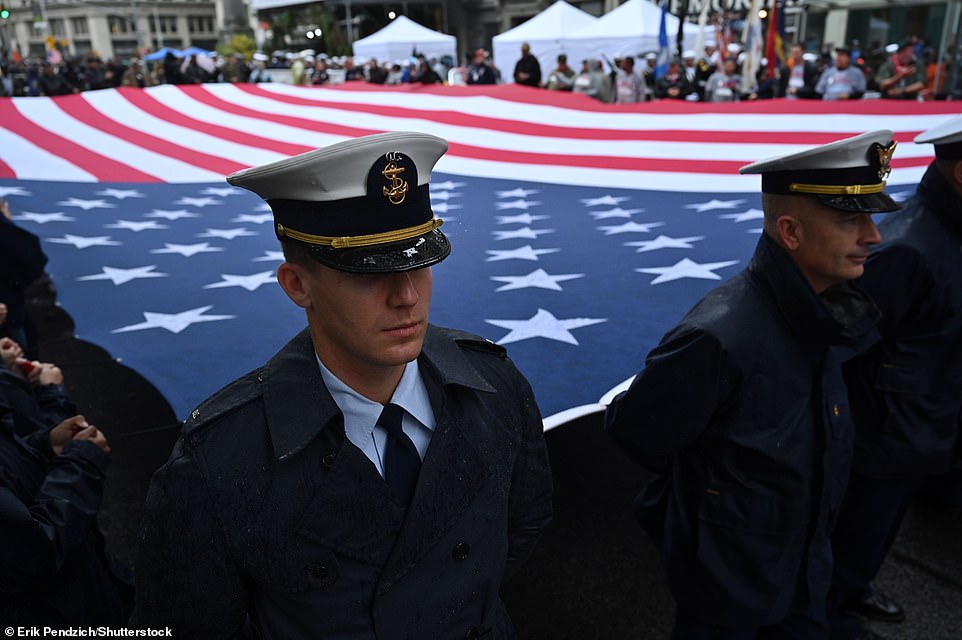 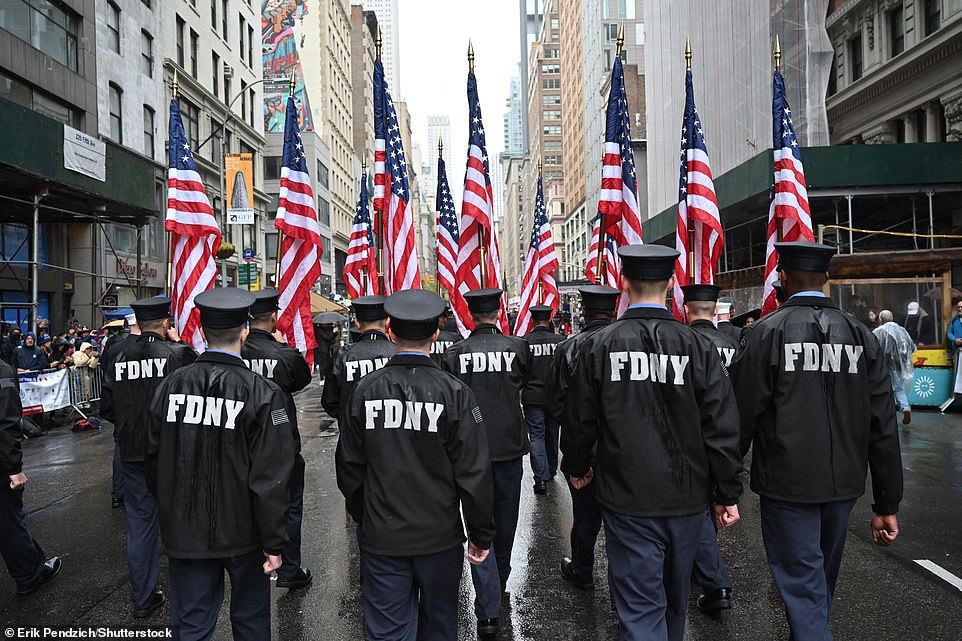 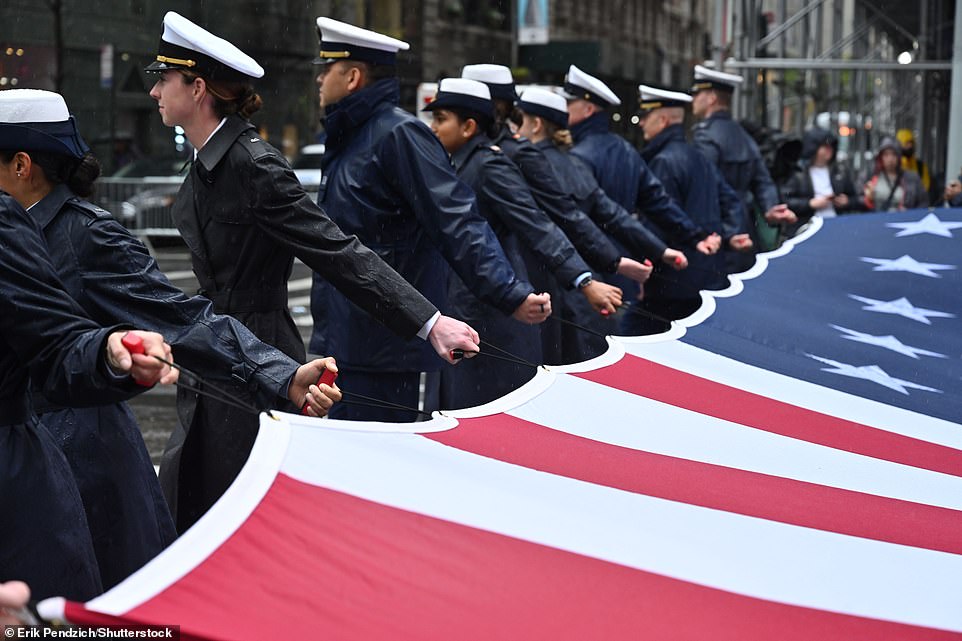 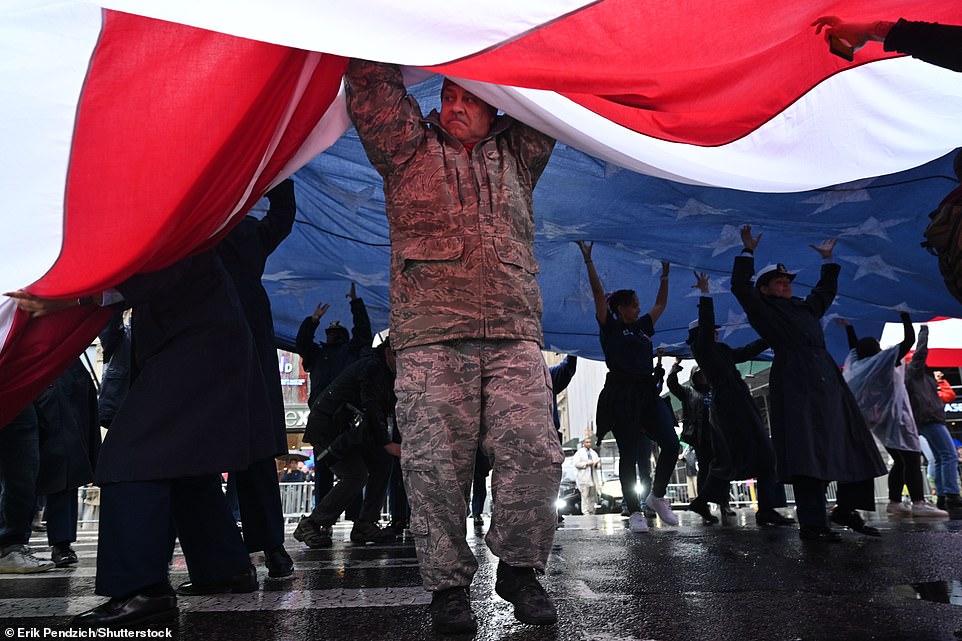 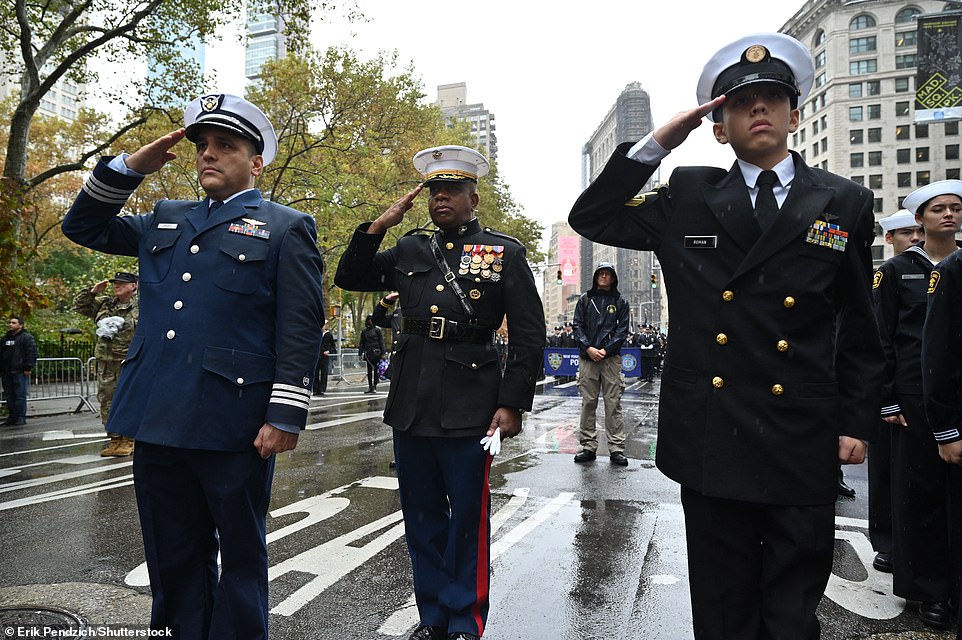 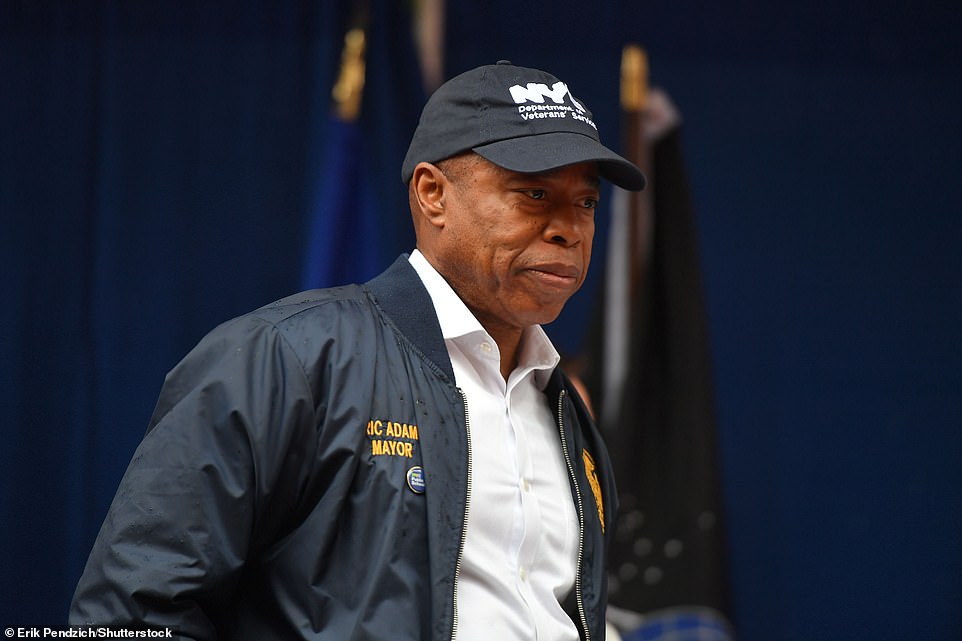 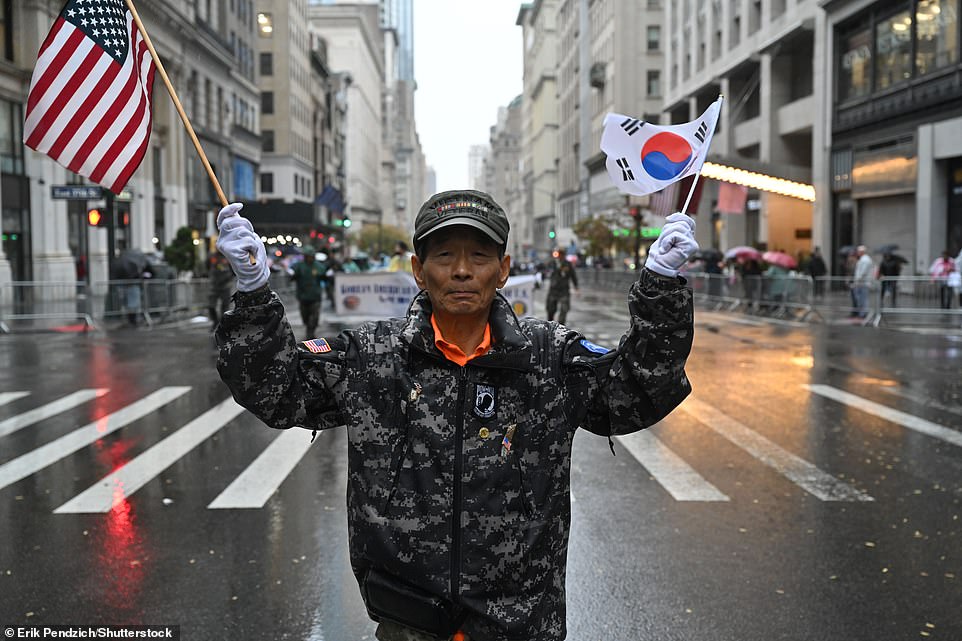 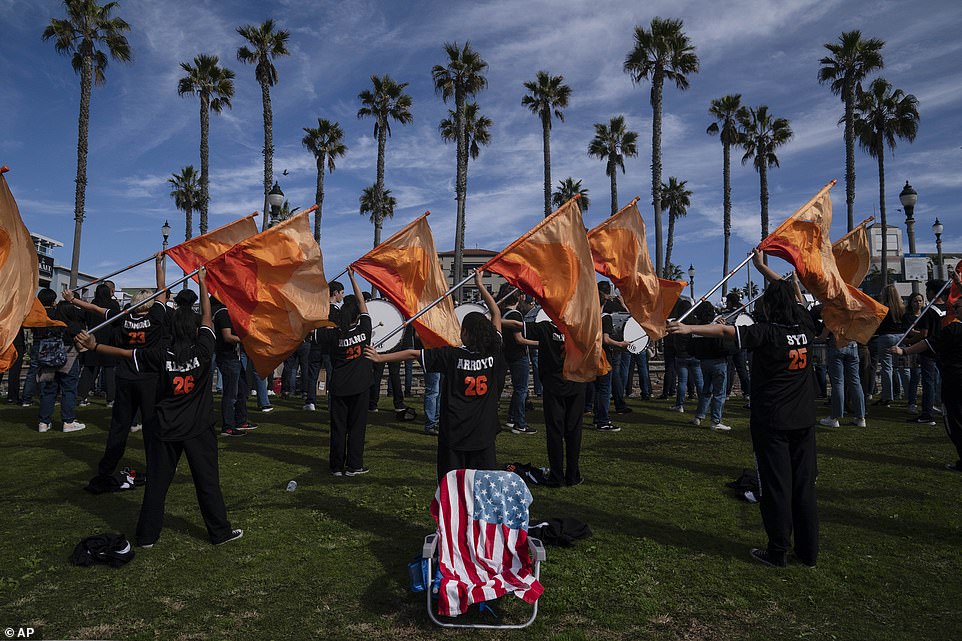 CALIFORNIA – A beach chair with an America flag towel sits on the lawn as members of Huntington Beach High School band perform during a Veterans Day ceremony in Huntington Beach, California 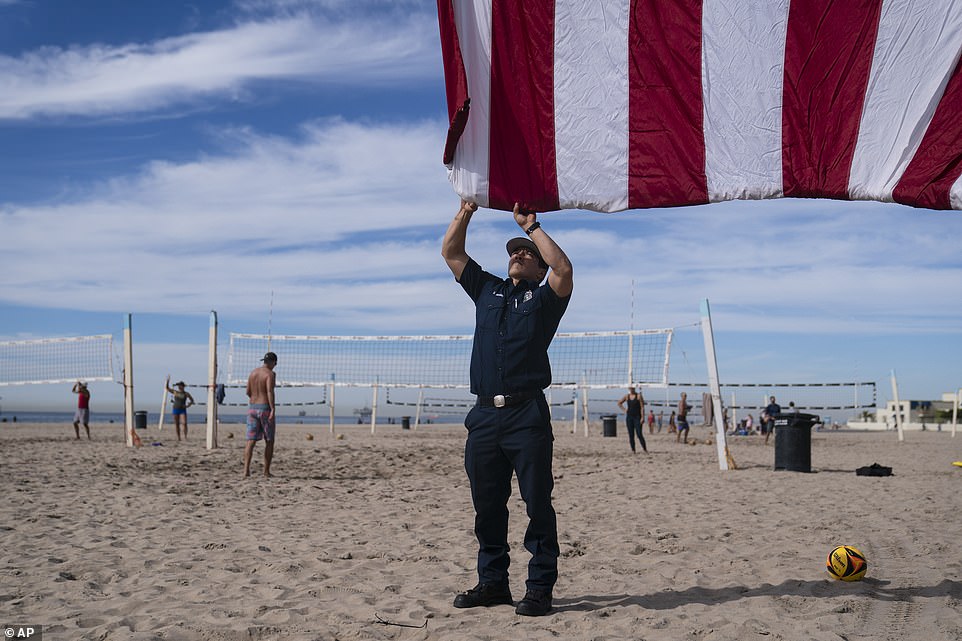 Thousands from Yuma, Arizona, lined the 4th Avenue of the city to watch the American Legion’s annual Veteran’s Day Parade. 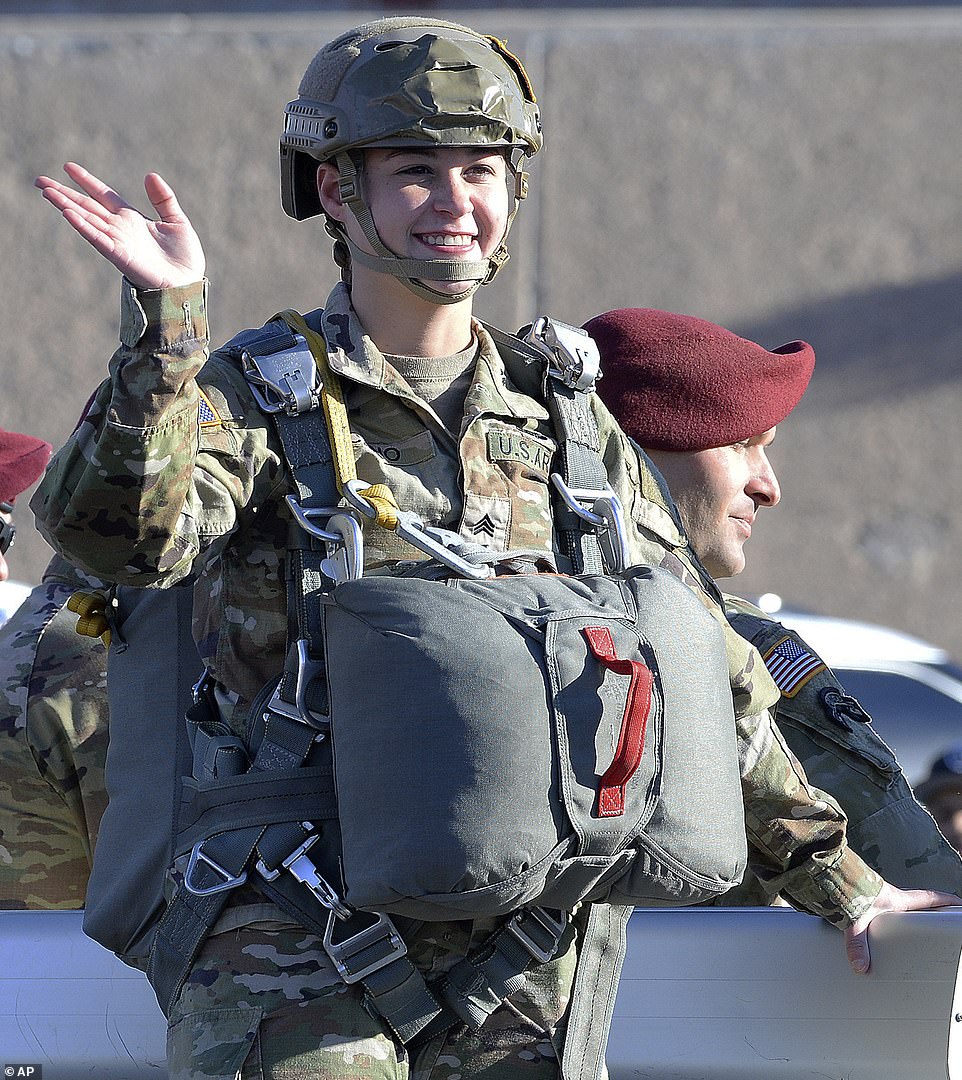 ARIZONA – A sergeant in the U.S. Army Yuma Proving Ground Airborne Test Force waves to the throngs of people lined up along 4th Avenue to watch the Veterans Day Parade organized by American Legion Post 19 in Yuma, Arizona

Poor weather across the country also meant that a number of events were called off.

In Dallas, Texas, thousands were expected to fill the streets of the city’s downtown for the Greater Dallas Veterans Day Parade but rain disrupted the celebration. Nonetheless, an 11th-hour ceremony went ahead inside its City Hall instead.

Colonel Ric Hamer, chairman of the parade and celebration, told the Dallas Morning News it was a ‘big disappointment that we lost the parade, but we didn’t lose everything.’

‘Usually, when we lose a parade, we go home,’ he said.