Thousands of ‘ripped-off’ families who left the unofficial ‘Fortnite’ festival feeling short-changed will no longer get a refund as the firm behind the event has ceased trading.

And up to 10,000 punters who forked out for two further Fortnite Live weekends in Spalding and Newark, Nottinghamshire, will also be added to a list of creditors with no guarantee of getting their money back.

The creditors may only receive a fraction of the money they paid if the assets of the company are not enough to cover its debts once it is wound up.

This is the second blow to be dealt to Mr Lord’s firm which is currently facing legal action from the official Fortnite brand. 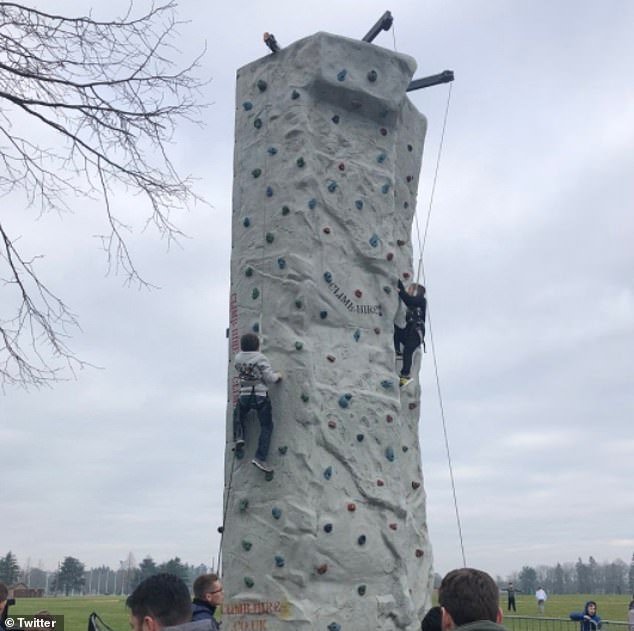 The event in Norfolk featured a climbing wall that could only fit three climbers at a time despite 2,800 people attending. Fortnite makers confirmed the event had nothing to do with them

The US-based makers of the game are suing the events company from Lincolnshire after it used the name of their game in the children’s event that was described as ‘shambolic’.

Epic Games, based in Cary, North Carolina, confirmed to Mail Online that the ‘Fortnite Live’ event in Royal Norfolk Showground Arena in Norwich was ‘not in any way associated’ with the multi-billion dollar company.

The Fortnite Live event was billed as the ‘Fortnite event of the year’ with thousands of youngsters looking forward to being immersed in a world based on their favourite game.

After a huge backlash online that included dozens of angered parents saying they would report the event, the producers of the uber-popular game say they have issued a claim against the organisers in London’s High Court.

A spokesperson for Epic Games told Mail Online: ‘The quality of our player experience is incredibly important to us, whether it’s inside the game or at official public events like last year’s Fortnite Pro-Am. 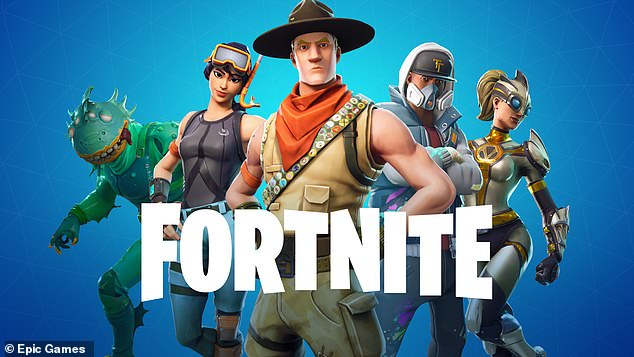 Fortnite was released in July 2017 and was said by Bloomberg to have brought the value of Epic Games to a new level. Pictured are some of the main characters in the game 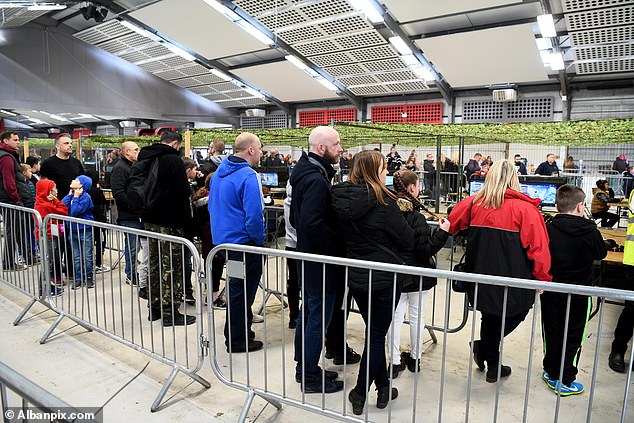 Parents (pictured queuing) paid between £13.52 and £22.14 for advanced tickets, but had to shell out £20 extra for activities like a ‘cave experience’ that turned out to be a tunnel through a trailer with a slide

‘Epic Games was not in any way associated with the event that took place in Norwich and we’ve issued a claim against the organizers in the High Court of London.’

There were 2,800 festival goers at Saturday’s event, but the climbing wall hired by organisers only had room for three people at a time. There were similar issues on Sunday.

Fortnite was released in July 2017 and was said by Bloomberg to have brought the value of Epic Games to a new level. 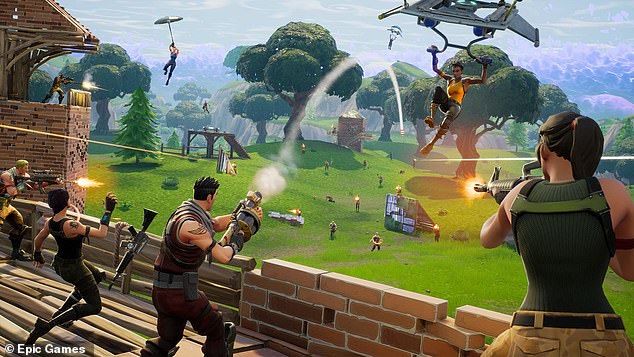 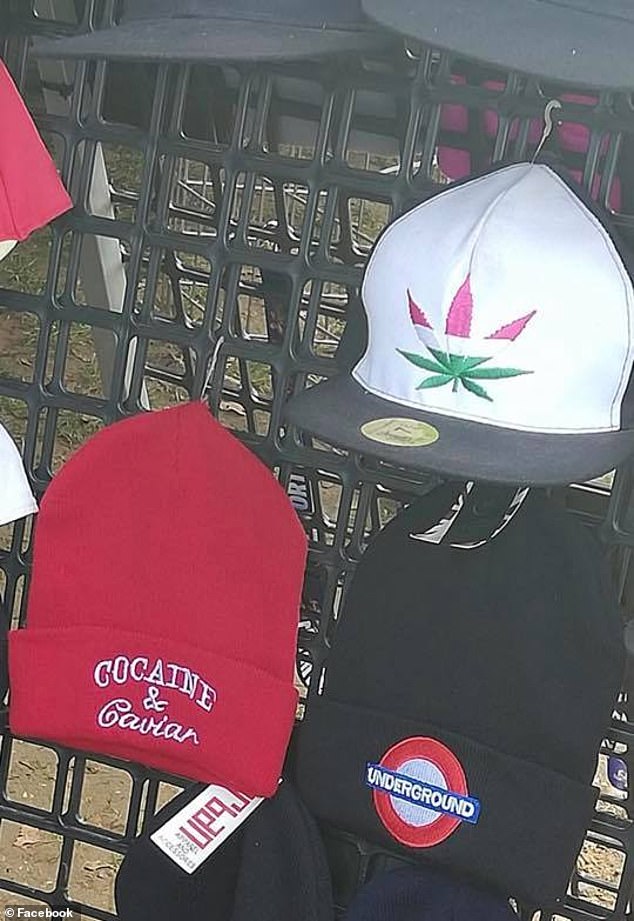 The game has been played by more than 125 million people, making it the world’s most popular video game – a certain way to attract youngsters to any themed event.

Parents at the Norwich event claimed they had to queue up to an hour to get into the festival at the Norfolk showground, and another hour to get wristbands for activities they had to pay extra for because they were not covered by the original ticket price. 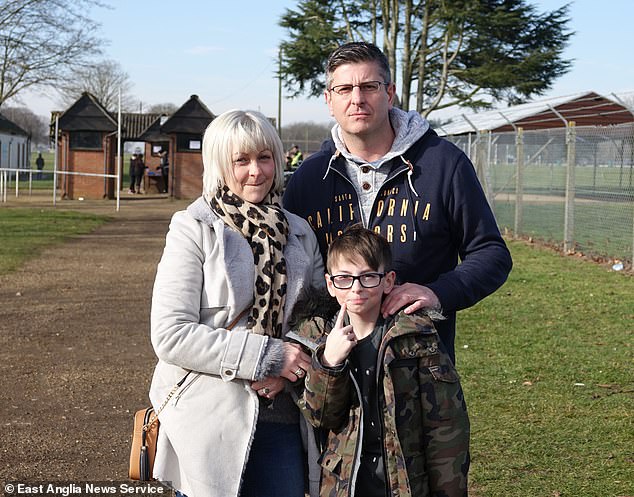 Claire Watkins with husband Paul and son Connor, nine, who were left disappointed at the Fortnite event in Norwich which has been brought to the attention of the High Court

Organisers finally agreed to issue refunds after they were swamped with complaints about the ‘rip-off’ day – but that took another hour, parents claimed.

Speaking whilst waiting in the queue for a refund, Philip Hinchliffe, from Norwich, who had brought his 11-year-old son to the event, said: ‘He’s out in the field playing with sticks, he’s having more fun doing that than he did at this event.’

Parents also described ‘upset children everywhere’ and went as far as to call the event ‘depressing’.

‘I felt like they were just trying to capitalise on something that was popular and just scam people,’ added Justine Petersen. 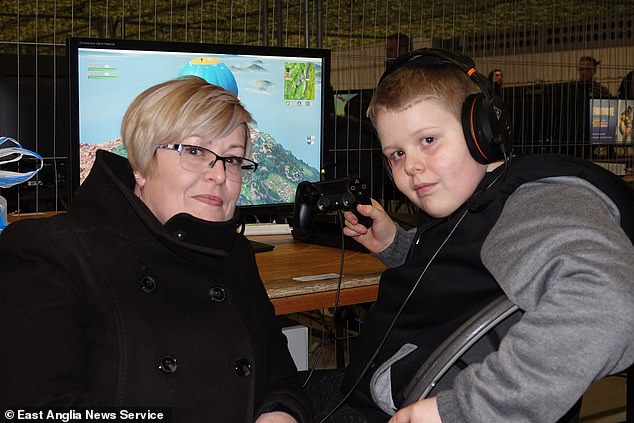 Organisers blamed staff not showing up on the apparent failure of the event and followed it up with a statement on Facebook: ‘Wow what a day. So many happy children have enjoyed a great day at Fortnite Live Norwich today.’ 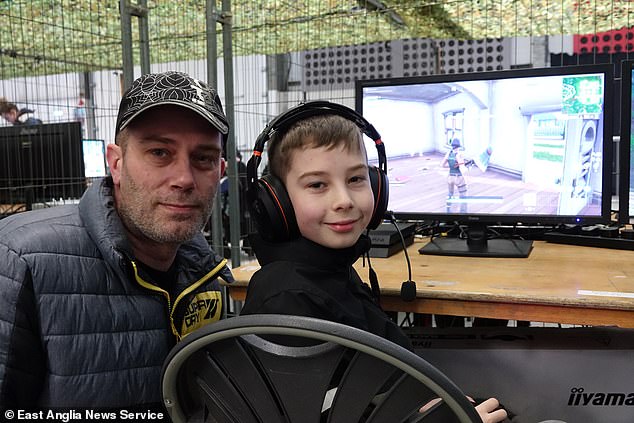 Joanne Robinson shared an image on the event’s Facebook page of a flat cap with a marijuana leaf on it and a beanie hat carrying the embroidered message ‘cocaine and caviar’.

Facebook user Lula Phillips posted: ‘My husband and son have just left, I can’t believe you have charged people for that absolutely shocking non event.’ 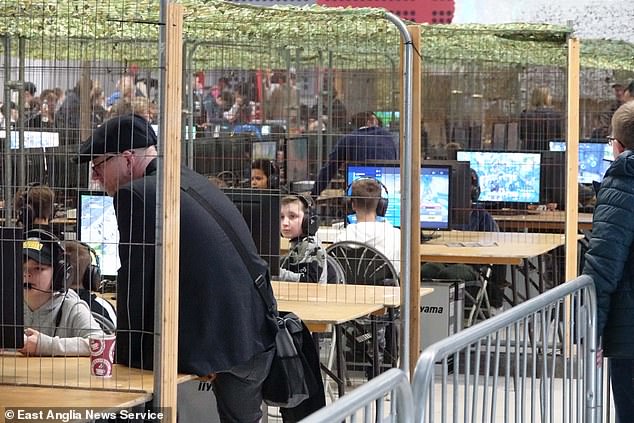 Shaun Lord, owner of Exciting Events which organised the festival, said there were problems with queues as eight of his 19 staff had not turned up on Saturday. 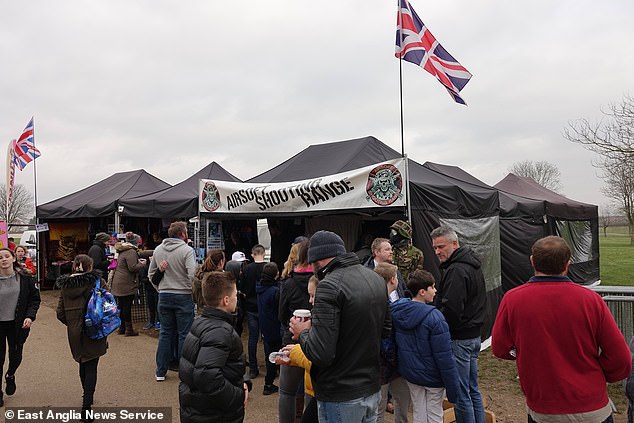 ‘We will take everybody’s feedback into consideration and we will act on it.’

Shaun Lord has been contacted directly for further comment.

Mr Lord began his career as a sales manager in 2003. 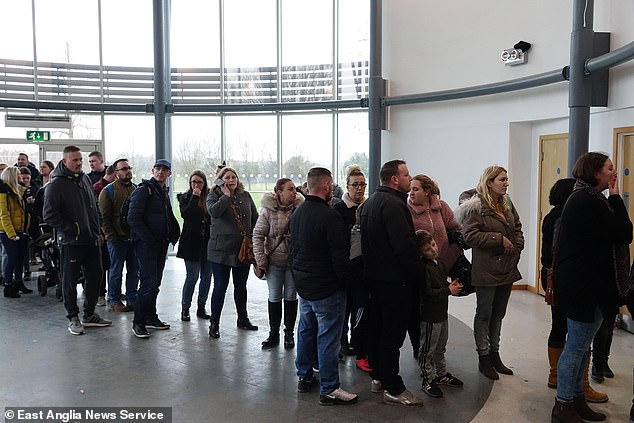 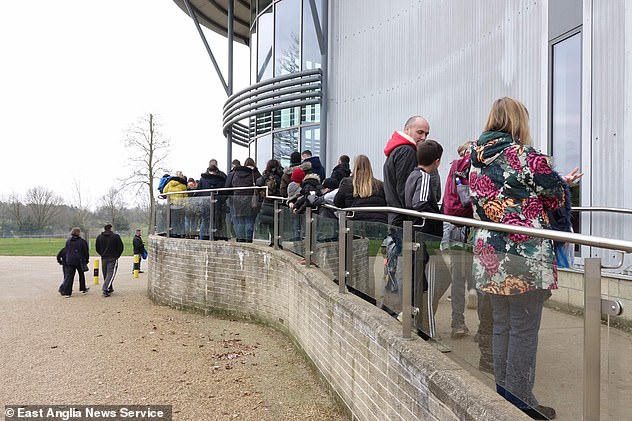 Shaun Lord, owner of Exciting Events which organised the festival admitted there were problems with queues, saying eight of his 19 staff had not turned up on Saturday. Pictured, parents queuing at the event