Thousands of fans gather in Kiev ahead of Champions League Final

Liverpool fans are in shock after talisman Mohammed Salah went off injured after 30 minutes in the Champions League final against Real Madrid in Kiev.

The match, which is the highlight of the European club football season is taking part in Kiev’s Shevchenko Park.

Despite the relative peace outside of the stadium now, tensions are still running high amid reported violence from local hooligan gangs targetting British supporters. 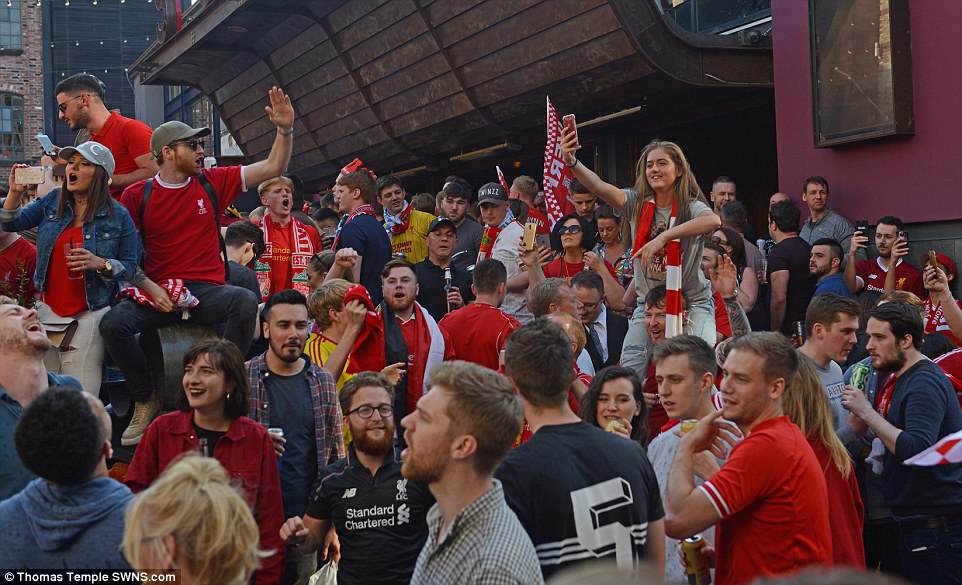 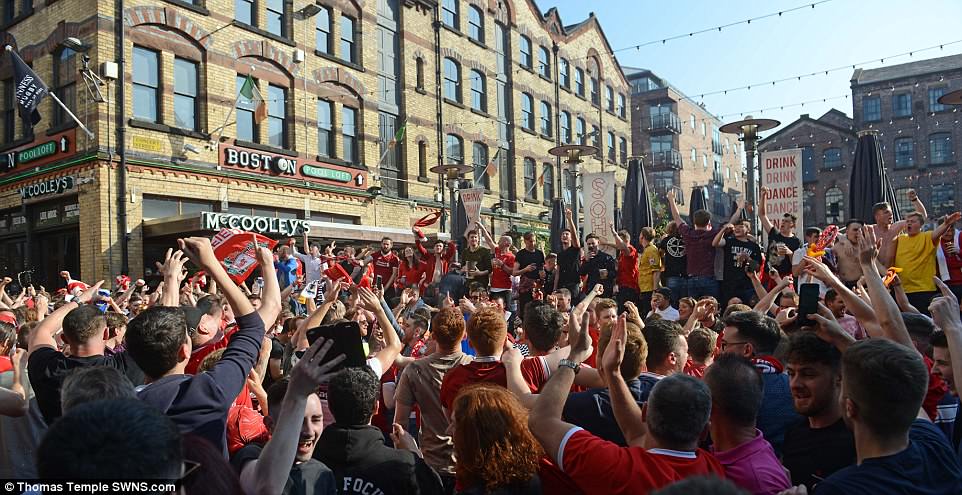 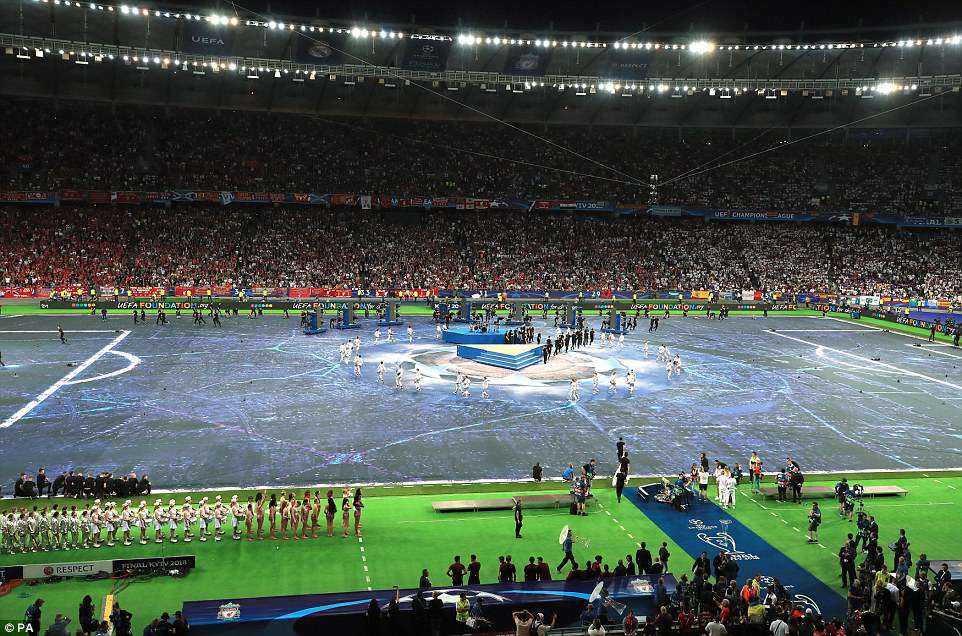 Uefa prepared an extravagant ceremony ahead of tonight’s game 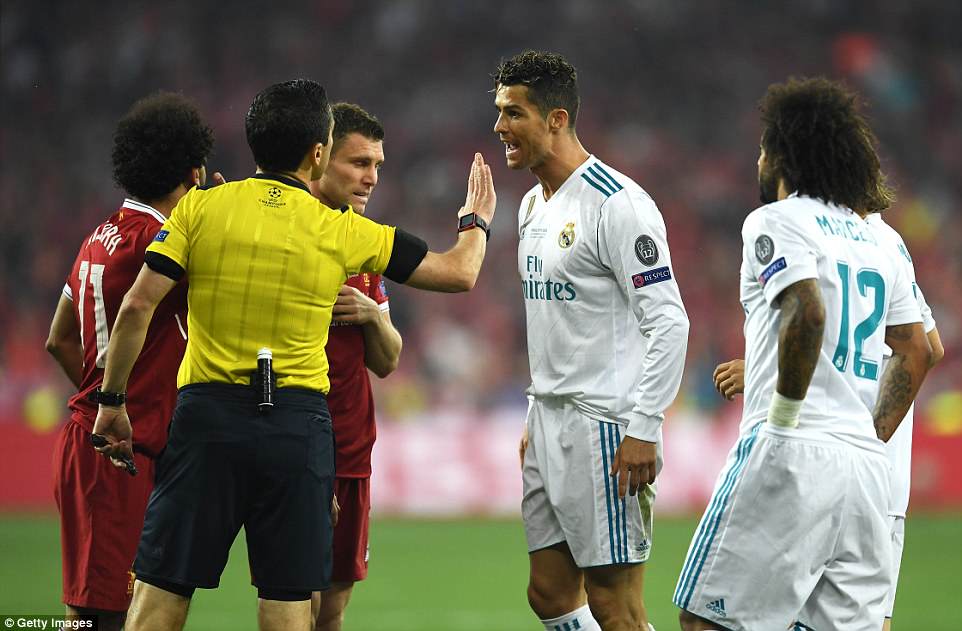 Cristiano Ronaldo, pictured, has scored 15 goals in the Champions League this season – two fewer than in 2013-2014

Liverpool fans are outnumbering and outsinging Real Madrid’s following in the 63,000-capacity crowd.

Both teams’ fan anthems were played before kickoff and the red scarves of Liverpool fans peppered one corner of the end occupied by Madrid supporters during ‘You’ll Never Walk Alone.’

Both teams were allocated more than 16,000 tickets for the game.

UEFA expects a global television audience of more than 160 million for the Champions League final. 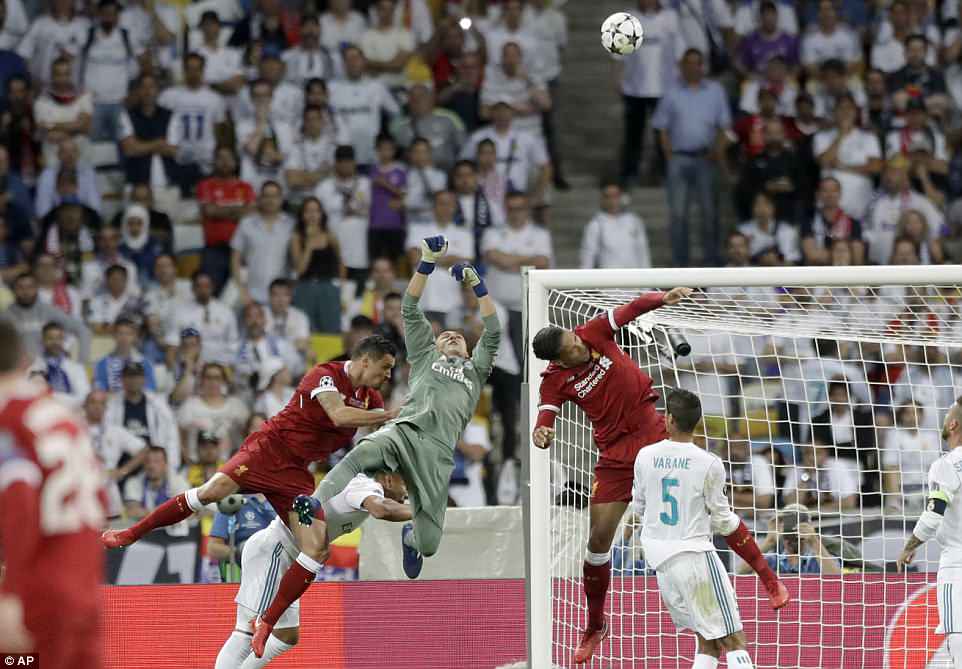 Liverpool fans outnumbered Real Madrid fans at the stadium, despite only receiving an allocation of 16,000

Liverpool, which has a strong following in Asia, is also playing in its first Champions League final for 11 years.

‘There has been a lot of hype with the way the teams qualified,’ Epstein says. ‘It’s been a mad season.’

The best-performing recent final was a 175 million ‘global in-home average audience’ for the 2011 final when Barcelona beat Manchester United. 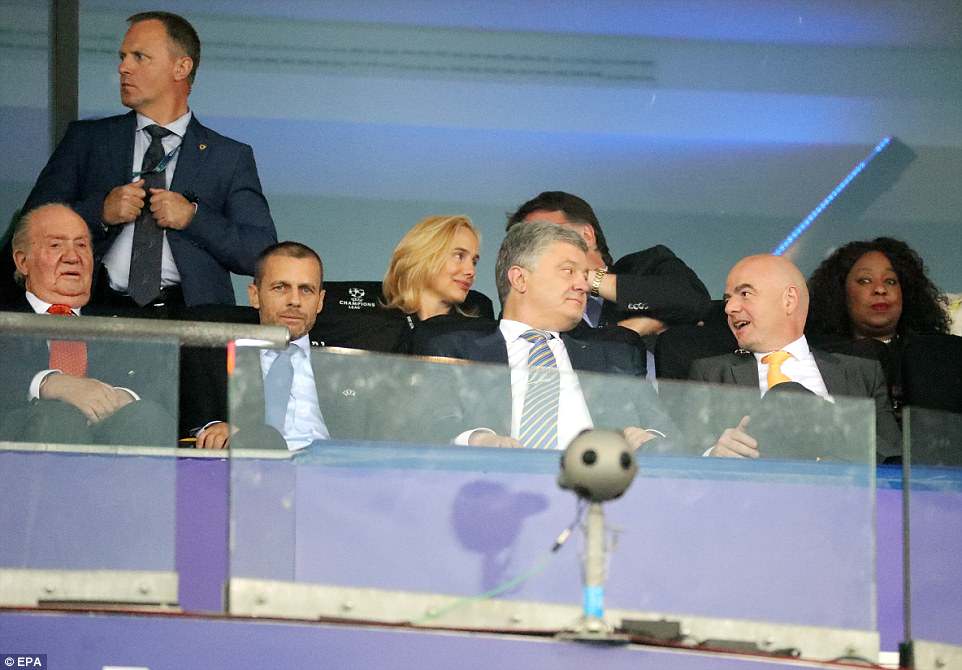 Former King of Spain Juan Carlos was spotted in the crowd, far left, along with the president of Ukraine, Petro Poroshenko, centre and the Fifa president Gianni Infantino, right

The violence came as Kiev police revealed they evacuated five stations on the city’s subway network after a hoax caller warned of bomb attacks.

Ahead of the Champions League final police checked the stations and ‘dangerous items were not found.’

Thousands of Liverpool fans who did not travel to Kiev gathered outside McCooley’s bar in Concert Square on Merseyside. 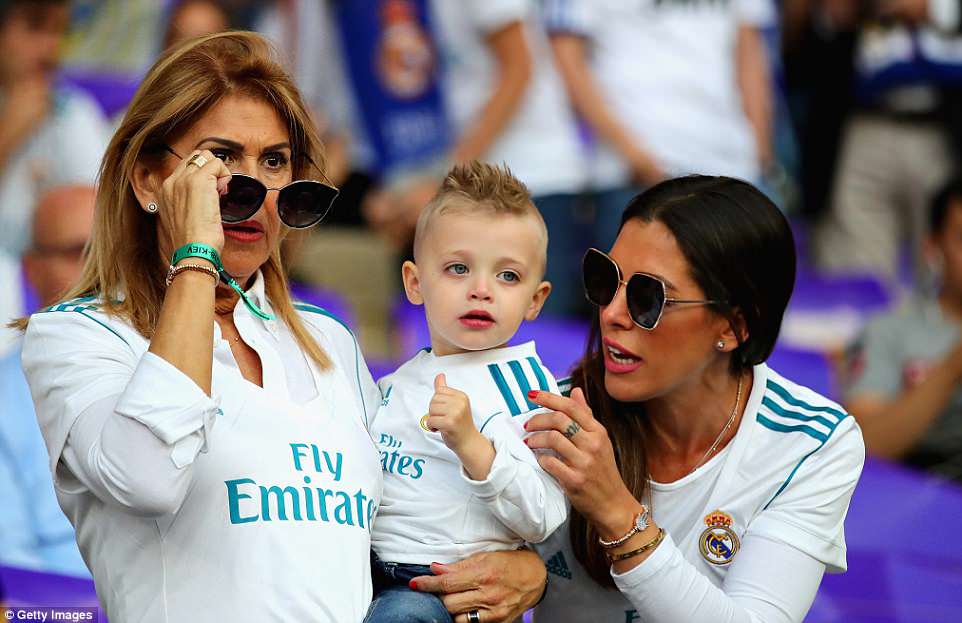 The family of Madrid legend Sergio Ramos are in the stadium to watch the game with his mother Paqui Garcia, left, son Marco Ramos Rubio, centre and the player’s wife Pilar Rubio, right

The Madrid star has 15 goals in the competition, and got 17 in the 2013-14 title-winning season. His record year included a penalty in the last minute of extra time in the final to cap a 4-1 win over Atletico Madrid.

Ronaldo seems sure to be the Champions League top scorer for the sixth straight year, and outright top scorer in five of them.

He is five goals ahead of Liverpool forwards Mohamed Salah and Roberto Firmino, who have 10 each. Sadio Mane, who also starts in the Liverpool attack, has nine.

Subway operations are now back to normal. The police say they’re now hunting the hoax caller.

Besides the bomb scare, police have so far registered 26 crimes involving foreigners, whether as victims or perpetrators. 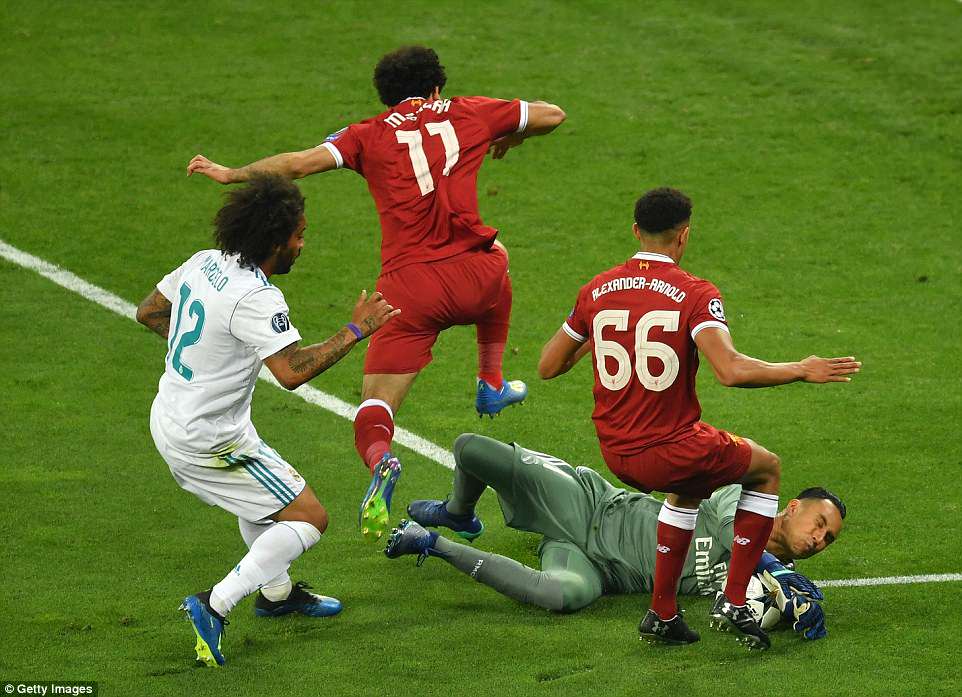 Liverpool are banking on Mohamed Salah, pictured jumping over the Madrid keeper, to provide a moment of inspiration 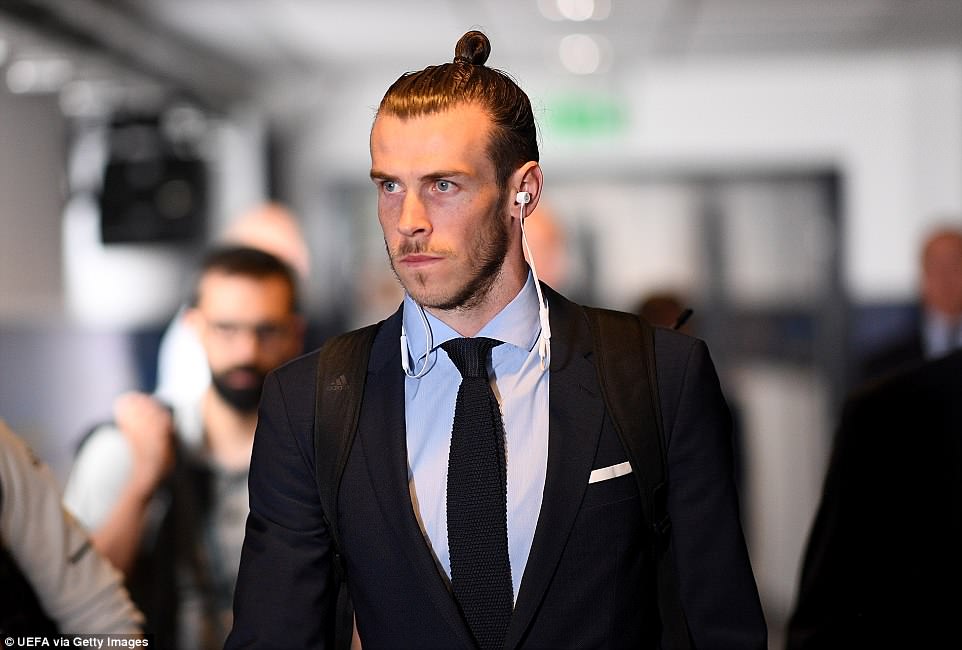 Wales player Gareth Bale, pictured, did not start tonight’s game having been left on the bench by Madrid coach Zidane 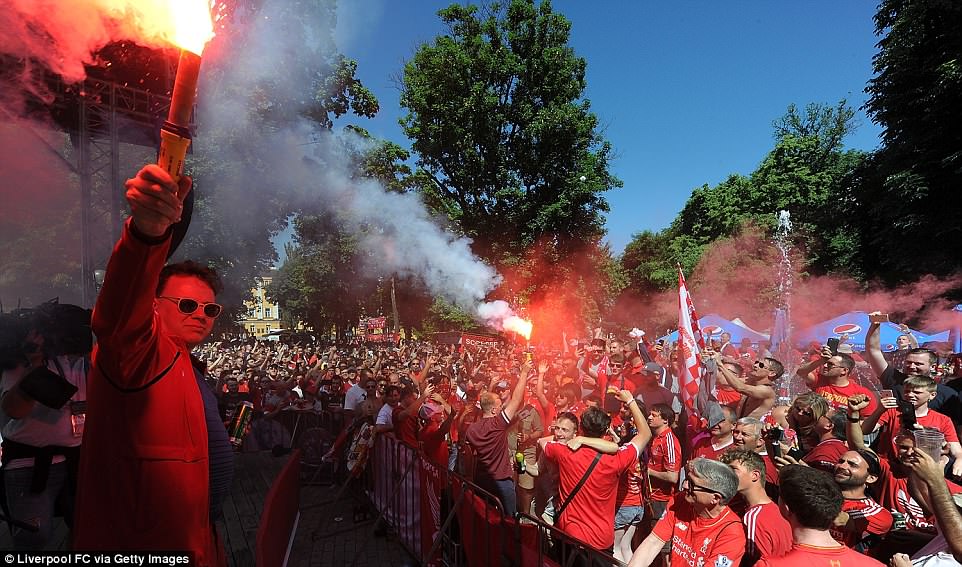 Despite the relative peace outside of the stadium now, tensions are still running high amid reported violence from local hooligan gangs targetting British supporters

That includes 10 cases of theft, three of hooliganism and two of fraud. Other foreigners were fined for causing a road accident and drinking in public.

While flight cancellations meant more than 1,000 Liverpool supporters could not leave Britain, coupled with soaring accommodation prices persuadeding roughly the same number of Madrid fans to have their ticket money refunded rather than travel to Ukraine.

Before the game, Mayor of Kiev Vitali Klitschko was spotted walking pitchside two hours before kickoff.

The former world heavyweight boxing champion had tried to secure additional landing slots at the local airport for flights from Liverpool after several charters were cancelled just hours before the jets were supposed to depart, leaving fans disappointed. 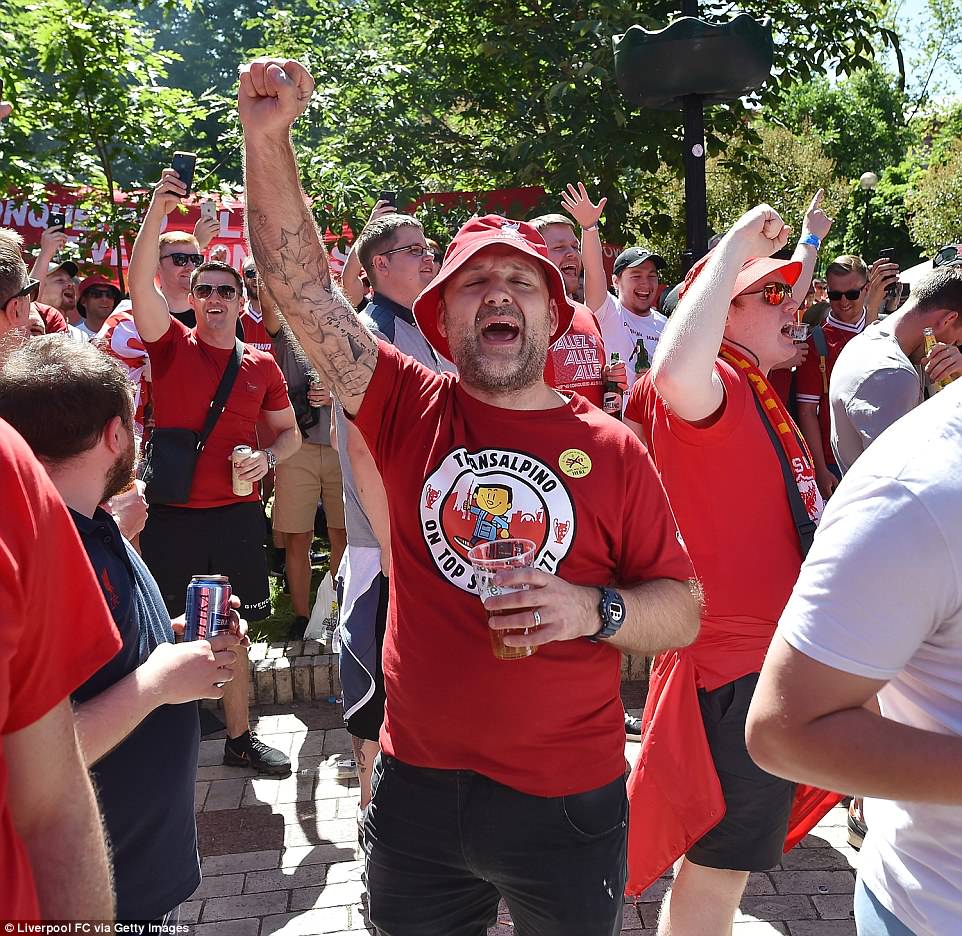 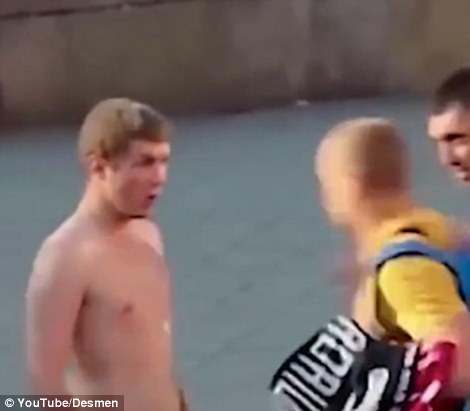 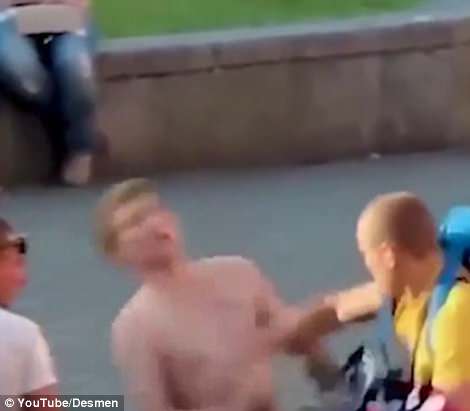 Social media images showed one bare-chested fan getting punched to the ground , although neither man was wearing club colours ahead of the big game 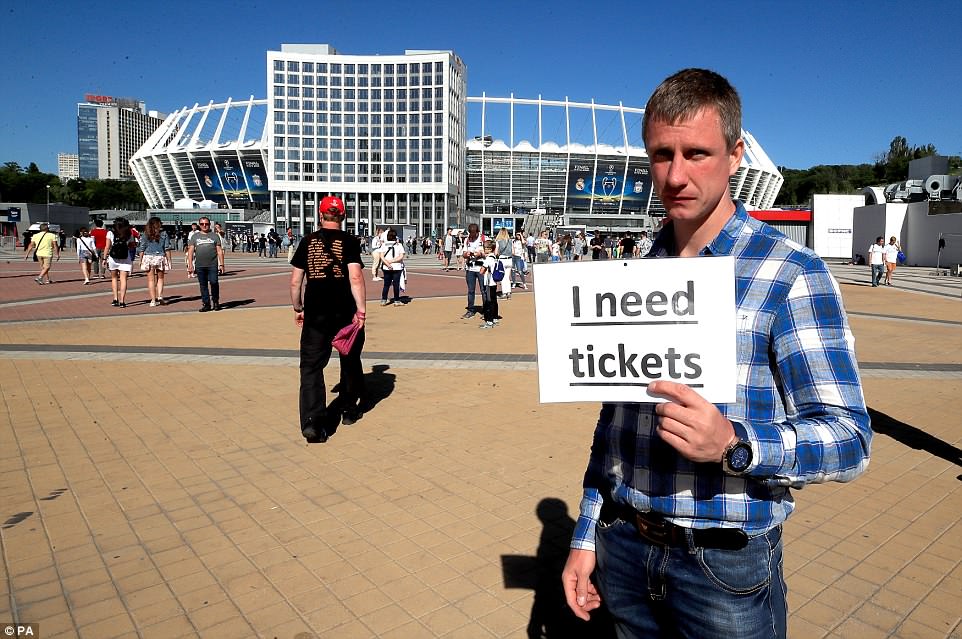 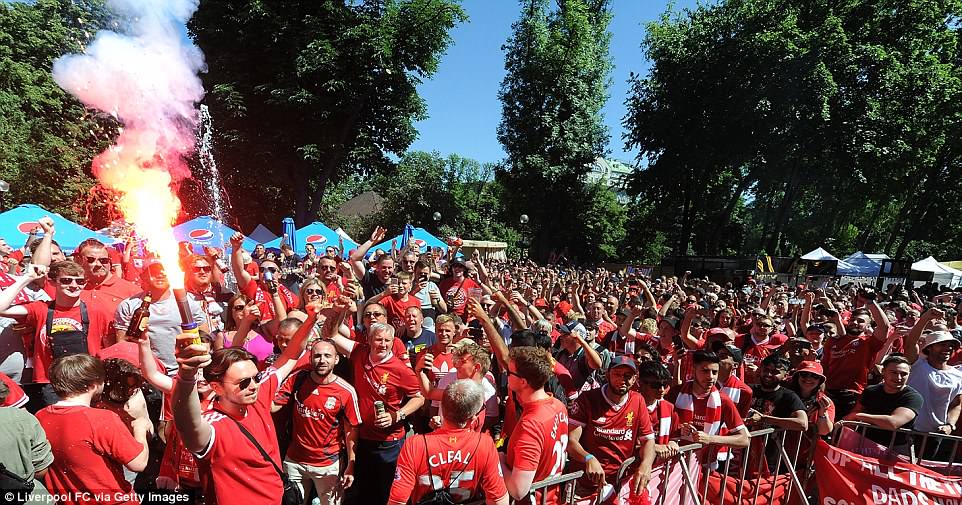 Last night, Mr Ashley received the devastating news that his flight to Kiev was cancelled – just hours before he was due to leave for the airport

Organizer UEFA has said refunded tickets will be made available to locals but there is likely to be the unusual sight of empty seats at a Champions League final.

Those fans who did make it are largely positive about Kiev, where the beer is cheap and a festival atmosphere is apparent in the city center.

Madrid fans Fabino Mohino and Yago Saez said they spent about 750 euros ($875) apiece on flights and traveled for 20 hours through Barcelona.

‘We were lucky to have a friend of a friend in the suburbs,’ Mohino said, meaning they could dodge Kiev hotel prices which are as much as $2,000 a night.

‘Loving it,’ added Saez, who has attended six of the last seven Champions League finals. ‘So far, so good.’

Security is tight in Kiev, with police lining the center, which has been closed to traffic. That seems to have prevented repeats of Thursday night’s attack on Liverpool fans at a restaurant – apparently by Ukrainian hooligans – which left two injured.

Liverpool manager Juergen Klopp will be supported at the Champions League final by a Premier League counterpart – Huddersfield’s David Wagner.

The two coaches have been friends for more than 25 years, starting in Germany and continuing in England.

Speaking in Kiev ahead of Saturday’s final against Real Madrid, Wagner said ‘we have texted a few times in the last week … and I am sure his team will be on fire tonight.’

Klopp is godfather to Wagner’s daughter. Wagner was Klopp’s best man. They played for the same Mainz team in the Bundesliga in the early 1990s. They were coach (Klopp) and assistant coach (Wagner) for Borussia Dortmund from 2011-15.

Klopp was hired by Liverpool in 2015 when Wagner was appointed Huddersfield manager.

Wagner says Klopp ‘is able to deliver an atmosphere where everyone is relaxed but focused enough and this is why I am pretty confident they have a chance.’

Pensioner Liverpool fan, 75, who has watched beloved club in every European final they have played in is left in tears after his flight to Kiev is cancelled at the last minute 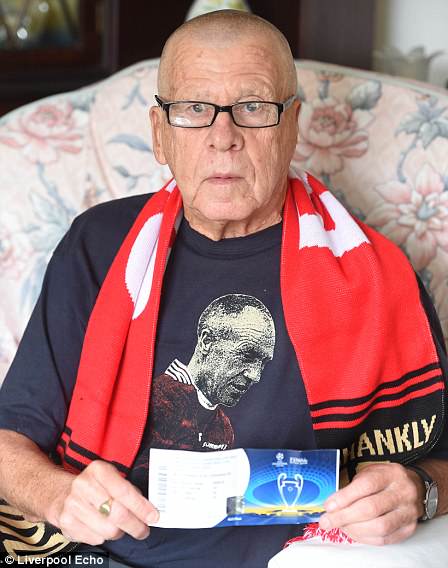 Ernie Ashley, 75, has supported Liverpool for 68 years, and tonight’s Champions League clash would have been his 13th European final – but instead his flight was cancelled

An elderly Liverpool fan who has followed the Reds to all their European finals will miss the big match after his flight to Kiev was cancelled at the last minute.

Ernie Ashley has supported Liverpool for 68 years, and tonight’s Champions League clash would have been his 13th European final.

But instead the 75-year-old will be listening to the game on the radio alone with no way of joining his fellow diehards at the match.

Last night, Mr Ashley received the devastating news that his flight to Kiev was cancelled – just hours before he was due to leave for the airport.

‘I got a call at 7.10pm saying the flight had been cancelled. The girl was in tears telling me and I was in tears with her to be honest with you.’

‘There’s definitely something unlucky about 13 finals for me.’

With a ticket to the final but no way of getting to Kiev, Mr Ashley said he could’t bear the idea of going out to watch the match anywhere in Liverpool tonight, so he’ll be following the game on the radio.

‘I’ll be putting the wireless on – my nerves are gone. I’m just so sad that there’s a ticket here and there are some good lads that have not got one,’ he said.

The Anfield season ticket holder said he feared it may be too late for him to pass his ticket on to another lucky supporter who is heading to Kiev.

‘Here I am stuck with my match ticket. I’d love to go down to the airport and give it to a genuine fan but you don’t know in this day and age – they might sell it over the odds and it would come back to me,’ he said.

‘I could lose my season ticket. I’ve been watching them for 68 years, I don’t want that to happen. It breaks my heart, the Reds fans, good lads with no tickets, and there’s me here with a ticket.

‘I’m scared to go down and give it to someone in case it goes in the wrong hands.’

Hundreds more football fans were stranded after another Liverpool to Kiev flight was cancelled last night.

Myriad Travel said one of their chartered flights set for the Champions League final would not be able to travel this morning.

Passengers booked on JTA flight number 1 from Liverpool Airport at 6am were told of the news just after 6pm yesterday.

‘Liverpool FC has been made aware of the cancellation of a further charter flight to Kiev operated by Air Partner Ltd and booked through travel agents Myriad Travel and Crown Travel,’ the club said.

The team said those with cancelled flights were entitled to apply for a refund of their match ticket for the Champions League final.

‘We are sorry to advise that flight 1 (SVB116) to KIEV has been cancelled by our supplier JTA in the last few hours,’ Myriad Travel said.

‘We have been desperately trying to source an alternative but none are available. Flight refunds will be issued ASAP. The other three flights are not affected.’

The tweet also included a statement from JTA that claimed the charter provider did not hold the correct licence to fly.

Supporters were sent a document from Myriad Travel last night which appeared to come from the provider JTA travel.

‘It is with great regret we have to advise of the cancellation of your upcoming flight to Kiev,’ it read.

‘The aircraft charter provider has notified us that the aircraft does not have the correct licence to fly and has refused to provide any further assistance or suitable alternative.

‘JTA are the agent of air partner and have exhausted all alternate options due to such late notice and therefore cannot provide an alternative flight due to aircraft availability and slots available at such a late stage.

‘This is no reflection on your reputable independent travel agent Myriad & Crown Travel you have booked via, who we have worked extensively with to try secure alternatives for you.

‘A full refund of all monies paid for flights will be reimbursed to your agent and we cannot express our sincere apologies and regret for this cancellation.’

‘We deeply regret that the original aircraft was not able to fly,’ Air Partner said.

‘On Thursday morning, we offered a number of alternative aircraft solutions to the travel agent that contracted us, but they declined them, and we fully refunded the travel agent.’

Hundreds of other fans who booked with World Choice Sports were also delivered a devastating blow on Thursday when three planes bound for Kiev were cancelled.