Thousands of pink flamingos have gathered in Mumbai after the coronavirus lockdown caused cleaner air and water due to less human activity and pollution.

Footage captured from an apartment in Nerul overlooking a creek in Navi Mumbai reportedly shows more than 150,000 of the beautiful birds gathering on April 20.

Environmentalists have pointed out that although flamingos migrate to the area each year, this year has seen unusually high numbers of the birds.

In a video shared on social media, thousands of flamingos can be seen flocking around a creek in Nerul, Navi Mumbai after migrating to the water from all across the continent

They believe that cleaner air and water – one of the positive side effects of the Covid-19 restrictions – has allowed more birds to make the journey.

According to Nathuram Kokare of Thane Creek Flamingo Sanctuary, residents are seeing an unusually large number of flamingos around Mumbai because of ‘less polluted water and air’ and ‘improvement in the quality of the algae’, their primary food.

Residents living near the water have confirmed that they have not seen this many birds migrate to the area in years, and have agreed that their presence is another demonstration of how human activity has impacted wildlife across the globe.

One Indian news publication, The Print, reported that the Bombay Natural History Society has predicted as many as 25 percent more had migrated than last year, and said that as many as 150,000 may have made the journey to the wetlands.

Some residents have even used their arrival to approach the authorities and argue for more work to be done to provide a healthier environment for the flamingos every year. 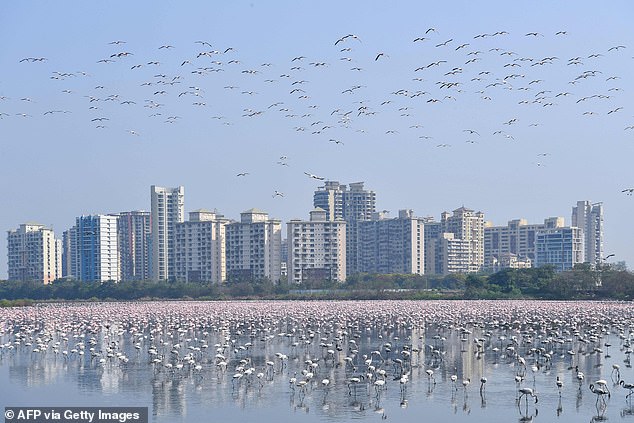 Air and water has been cleaner since the whole of India went into lockdown on March 24. Construction and travel has halted, reducing air pollution and encouraging wildlife activity

Areas, such as this wetland, would typically see lots of construction, but this has come to a halt during the coronavirus crisis as all of India’s 1.3 billion population remains under lockdown, and have been since March 24.

Harsh Goenka, who lives near the Navi Mumbai water, tweeted his delight at seeing the flamingos. His tweet read: ‘While humans are locked inside, flamingos are putting on quite a spectacular show for the residents of Seawoods Complex in Nerul, Navi Mumbai!’

The flamingos usually migrate to Mumbai in October to March from Rann of Kutch in Gujarat and Sambhar Lake in Rajasthan – sometimes even as far away as Pakistan, Afghanistan, Iran and Israel. They then fly out in June. 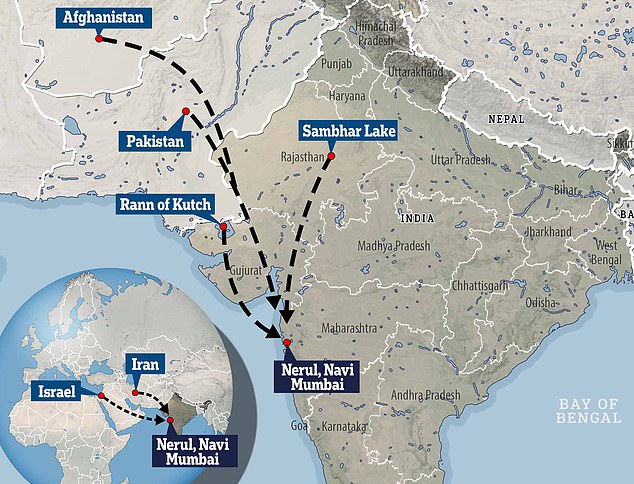 The Flamingos are said to travel from other locations in India, including Rann of Kutch in Gujarat and Sambhar Lake in Rajasthan, and sometimes even migrating from as far away as Pakistan, Afghanistan, Iran and Israel 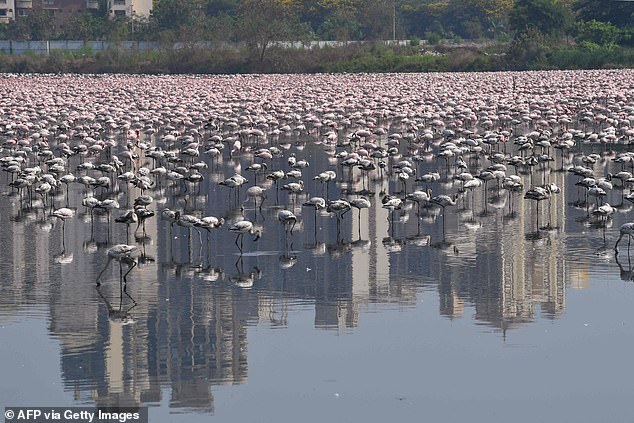 India’s lockdown, announced by Prime Minister Narendra Modi on March 24, was initially due to last for just three weeks and was a ‘total ban on venturing out of your homes’ he said to the Indian people at the time, in a televised address.

However, he was forced to extend the lockdown until at least May 3 as it became clear the initial three weeks was not enough to stop the spread of the virus.

The intention was to reduce the long-term damage the coronavirus would have on India’s healthcare facilities and also limit the spread in the densely populated country.

According to the Johns Hopkins University, India has had a total of 21,797 confirmed cases of the coronavirus, resulting in 681 deaths. 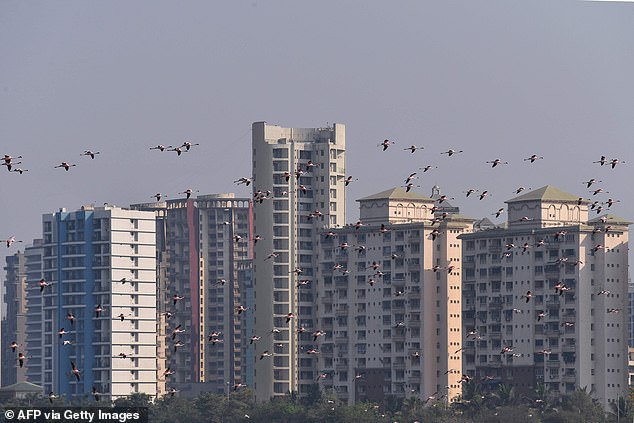 One resident Tweeted: ‘While humans are locked inside, flamingos are putting on quite a spectacular show for the residents of Seawoods Complex in Nerul, Navi Mumbai!’