Thousands of Hong Kong protesters are tear-gassed by police

Thousands of Hong Kong protesters have been tear-gassed by police in the first clash since Beijing announced a new law to ‘take full control’.

Pro-democracy supporters in Hong Kong have sharply criticized China’s proposal to enact a national security law that would ban secessionist and subversive activity, as well as foreign interference and terrorism in the semi-autonomous territory.

They say it goes against the ‘one country, two systems’ framework that promises the city freedoms not found on the mainland. 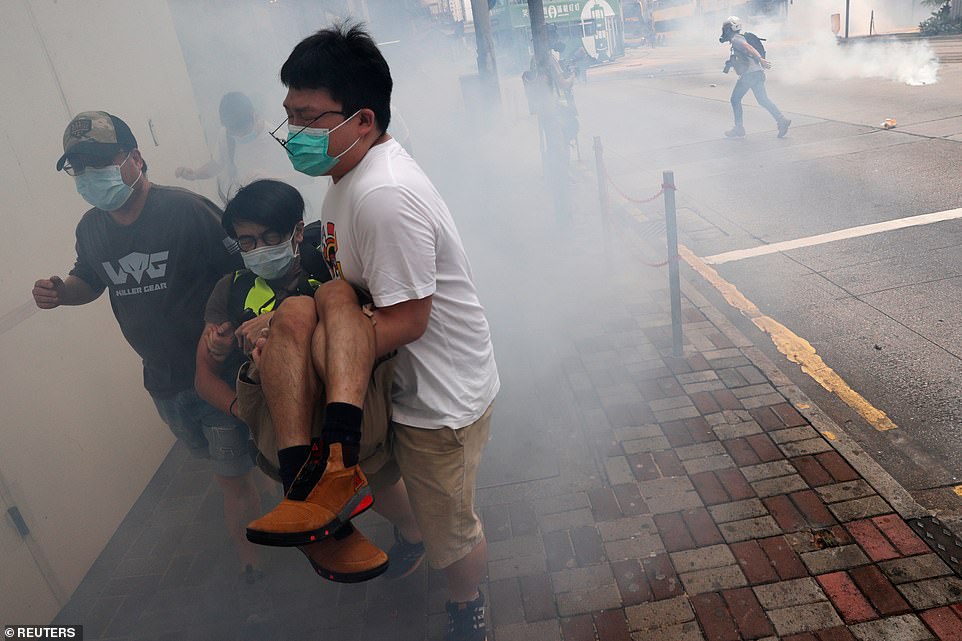 Pictured: A man runs away from the tear gas with his child has the police dispersed crowds in Hong Kong today in the first clash over the bill 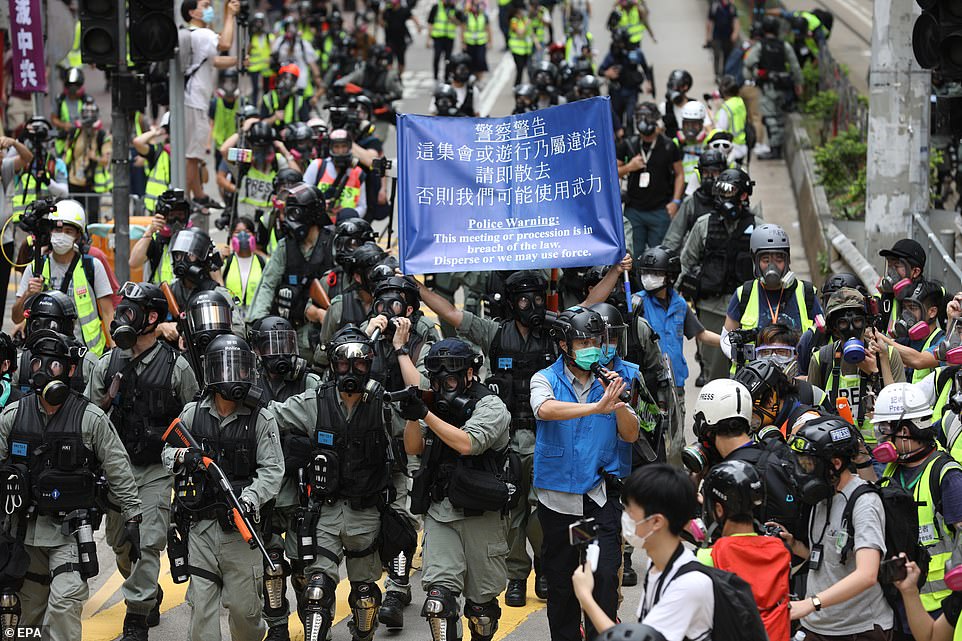 Pictured: Police warn crowds of protesters to disperse and threaten to use fore if they do not do so in Causeway Bay today

Activitist Tam Tak-chi was arrested during the protests for what police said was an unauthorized assembly. Tam said he was giving a ‘health talk’ and was exempt from social-distancing measures that prohibit gatherings of more than eight people.

The protesters were marching between the busy districts of Wan Chai and Causeway Bay when the tear gas was fired, after earlier police warnings against the assembly. 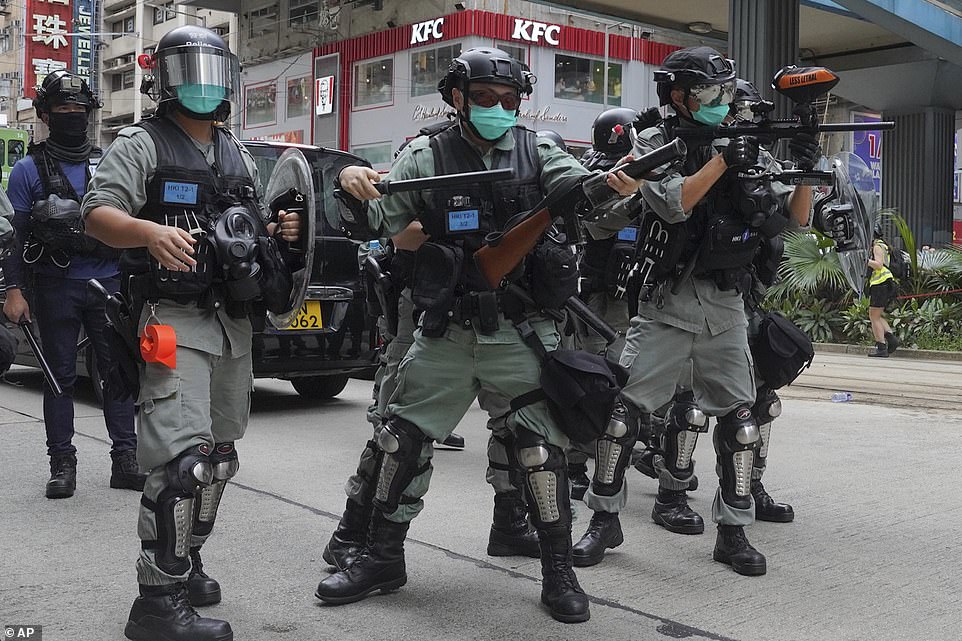 Pictured: Police in the Causeway Bay shopping district in Hong Kong today which has seen clashes over the Beijing bill 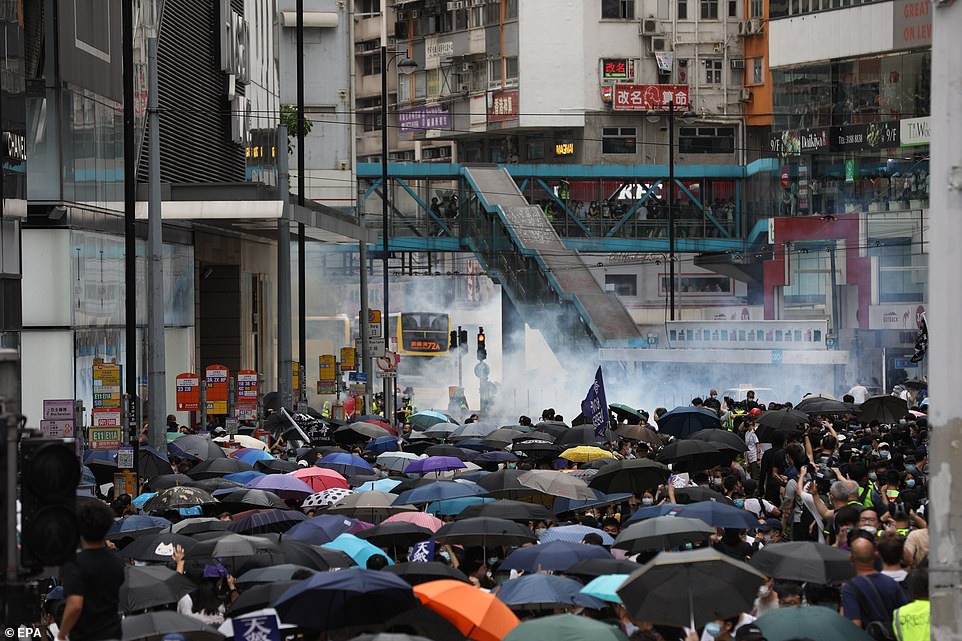 Tear gas is seen in the background as police try to disperse protesters during a rally against the implementation of a new national security law in Causeway Bay, Hong Kong, today 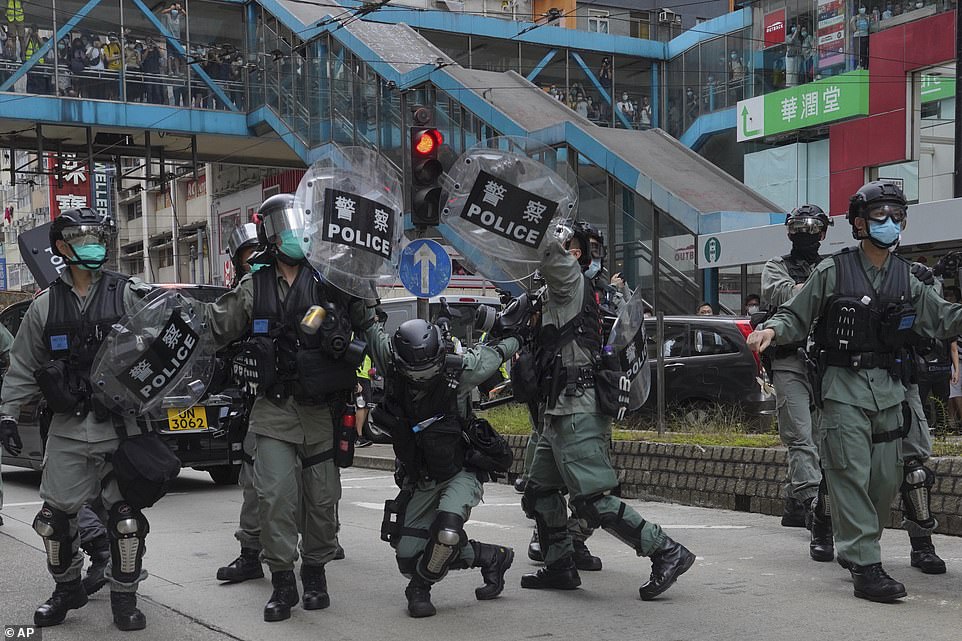 Riot police are pictured covering themselves with shields as they tackled protesters in Causeway Bay, Hong Kong, today

Beijing’s bill is a direct response to Hong Kong’s anti-government mass protests which started last June and lasted for months. Demonstrators pressed for five demands, including choosing their own leaders and democratic reforms.

The proposed decree would block secession, foreign interference, terrorism and all seditious activities aimed at toppling the central government and any external interference in the former British colony, said the South China Morning Post newspaper on Thursday, citing unnamed sources.

Hong Kong’s chief executive Carrie Lam, who is in Beijing for the National People’s Congress, voiced her support for the Communist Party’s decision on Friday.

She said in a statement that ‘to maintain national sovereignty, safety and development interests are the constitutional requirements of Hong Kong Special Administrative Region’. 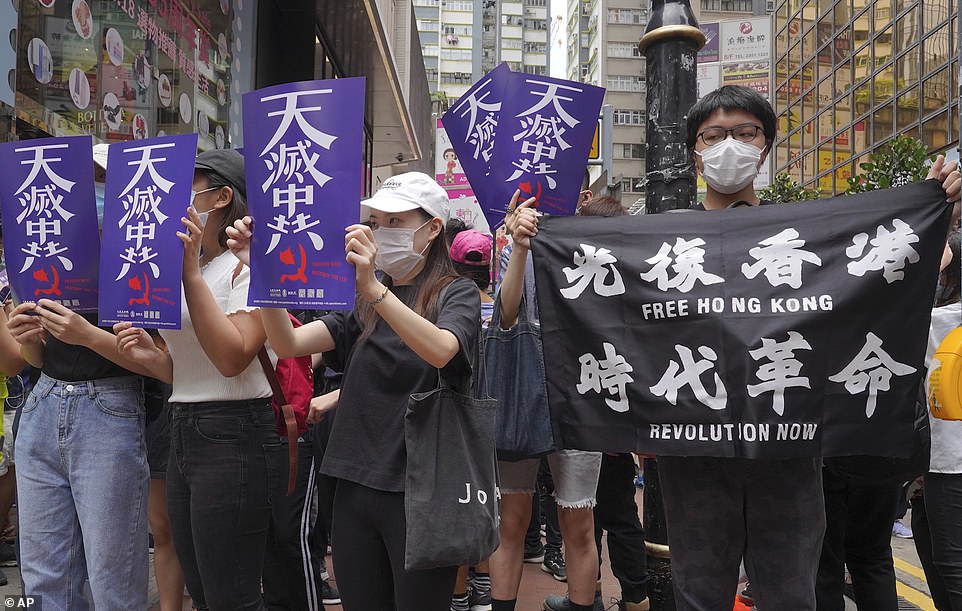 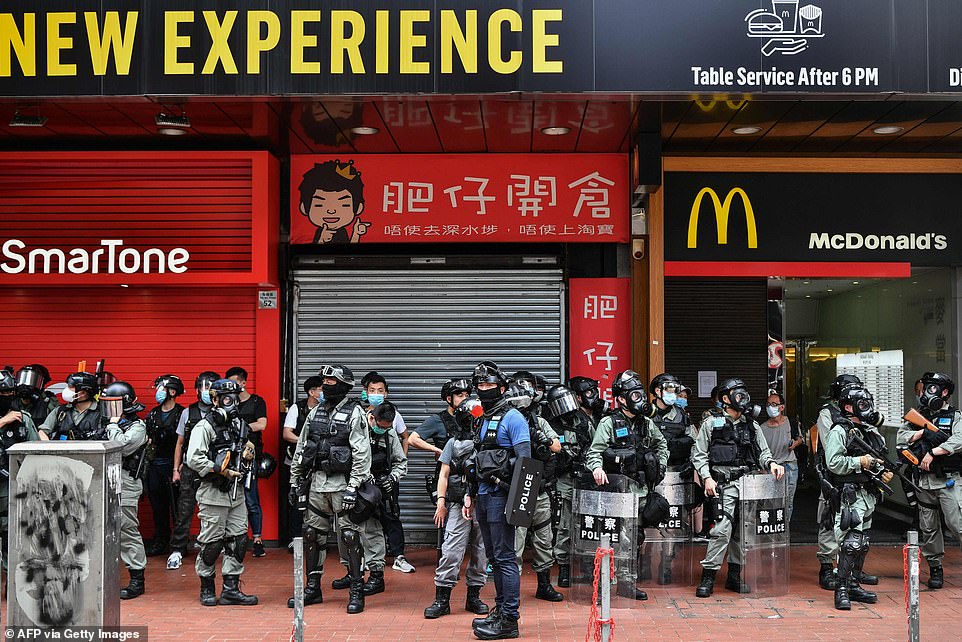 Riot police gather on a street as protesters take part in a pro-democracy rally against a proposed new security law in Hong Kong today. The proposed legislation is expected to ban treason, subversion and sedition, and follows repeated warnings from Beijing that it will no longer tolerate dissent in Hong Kong

He said at a press briefing by opposition parties and activists that the move shows Beijing is ‘directly taking control’.

‘They’re trying to ban every organisation in Hong Kong who dares to speak out against the Communist Party,’ he said, describing it as a challenge to global values such as freedom and liberty.

Hong Kong is ruled under a special arrangement, called the ‘One Country, Two Systems’, which was agreed upon by China and the UK before the city’s handover in 1997 and is supposed to provide for a level of independence for the city that other cities in China do not have.