Thousands of jobs at risk after Tata Steel agrees merger

By Rachel Millard, City Correspondent For The Daily Mail

Thousands of jobs could be lost after the UK’s largest steel employer agreed to merge with a German rival.

Tata Steel Europe, which employs about 8,000 in the UK – including 4,000 at Port Talbot in South Wales – is teaming up with ThyssenKrupp to battle cheap Chinese steel flooding the market.

Bosses said they would focus on making better-quality products to help them survive, but there could be about 4,000 job losses split between the two firms’ European workforce of 48,000.

An outside view of the Tata Steel service center in Gelsenkirchen, Nordrhein-Westfalen, Germany

It is not yet clear how many British jobs could be threatened.

The future of Port Talbot has been up in the air since 2016 when India-based Tata put its UK businesses up for sale amid heavy losses. It changed plans amid public outcry and political fallout.

Roy Rickhuss, general secretary of the Community union, welcomed the merger, but added: ‘We are seeking assurances on jobs and investment.’ 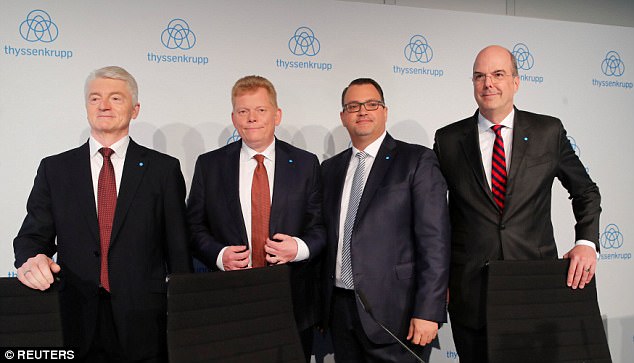 ThyssenKrupp AG CEO Heinrich Hiesinger and board members Guido Kerkhoff, Oliver Burkhard and Donatus Kaufmann before a news conference in Essen, Germany ahead of ot