Thousands of mourners gathered on Thursday to attend a vigil for the 11 people murdered in a California bar mass shooting.

Mourners packed out the Fred Kavli Auditorium in Thousand Oaks to pay their respects to the victims of the attack, which was carried out in the Borderline Bar and Grill in the town just 24 hours earlier.

According to police the bar had been full of college students enjoying a ‘country-themed’ night of dancing as ex-Marine Ian Michael Long, 28, walked in and fired a hail of bullets into the unsuspecting crowd.

Friends and family members of the 11 people who were killed by Long, survivors of Wednesday night’s shooting and community members were present at the service and all 1,800 seats inside the auditorium were filled. 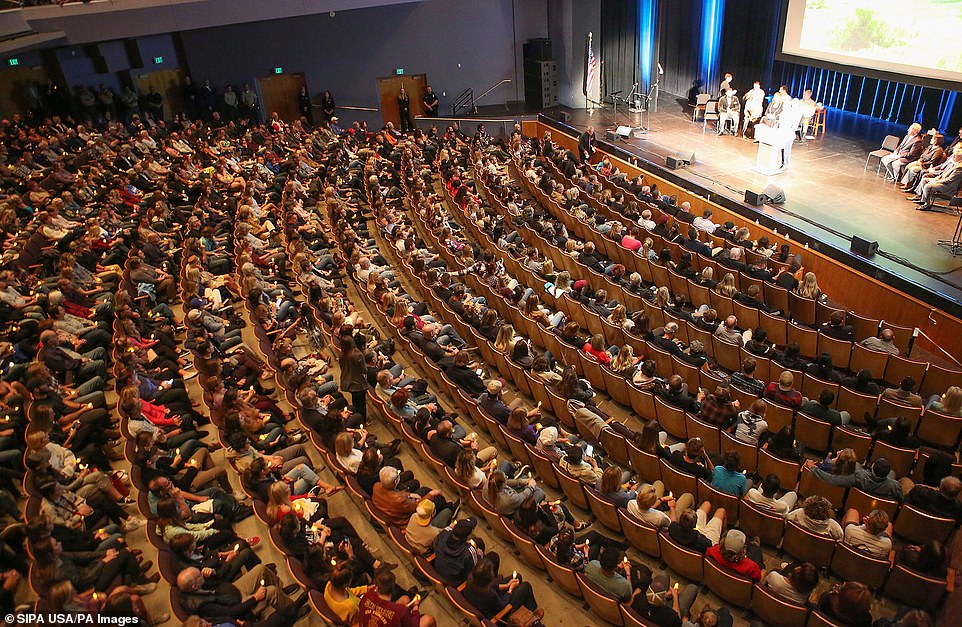 According to the event’s organisers all 1,800 seats in the auditorium were filled and a large crowd gathered outside the theater 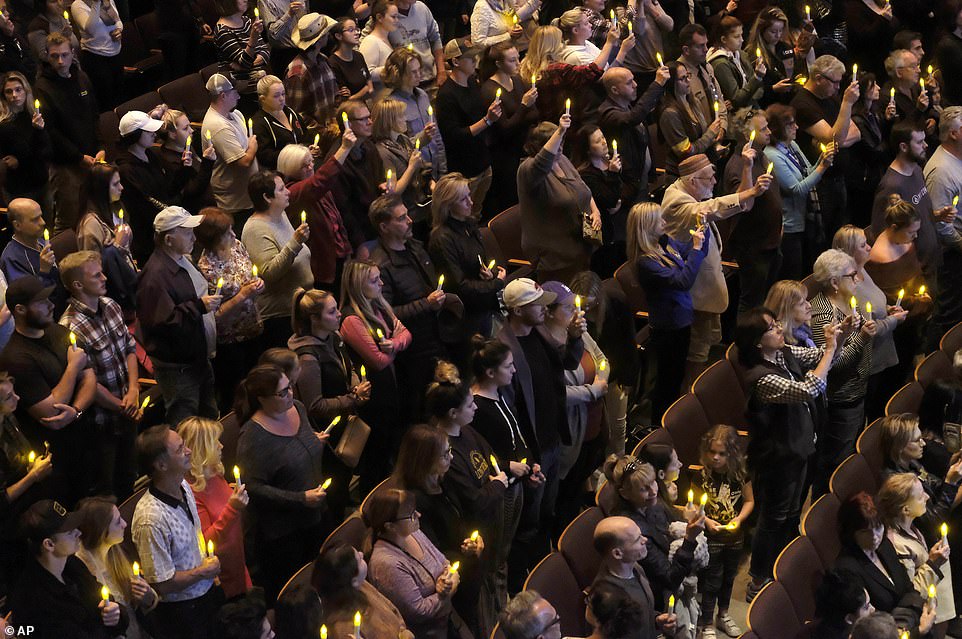 A second crowd gathered outside of the auditorium, creating makeshift memorials with flowers and photos as the doors closed for the program.

Thousand Oaks Mayor Andy Fox compared his city to other shooting hotspots in an emotional speech during the ceremony.

‘Tonight, Thousand Oaks takes its place with those cities, that in order to move forward must rely on hope,’ Fox said.

‘Tonight we are a hurting city. But we are a city of love, compassion and community… The dawn will break and we will be more loving, more compassionate, more unified.’

Ventura County Sheriff Geoff Dean, who lost one of his officers in the massacre, recounted the moment he told the man’s wife. Sgt. Ron Helus was shot and killed while responding to a call at the bar after he exchanged fire with the gunman.

‘When I met with his wife at the hospital, she didn’t know yet,’ said Dean, who’s set to retire Friday. ‘She had a scanner at home and heard his call on the radio, and was worried and drove herself to the hospital.’ 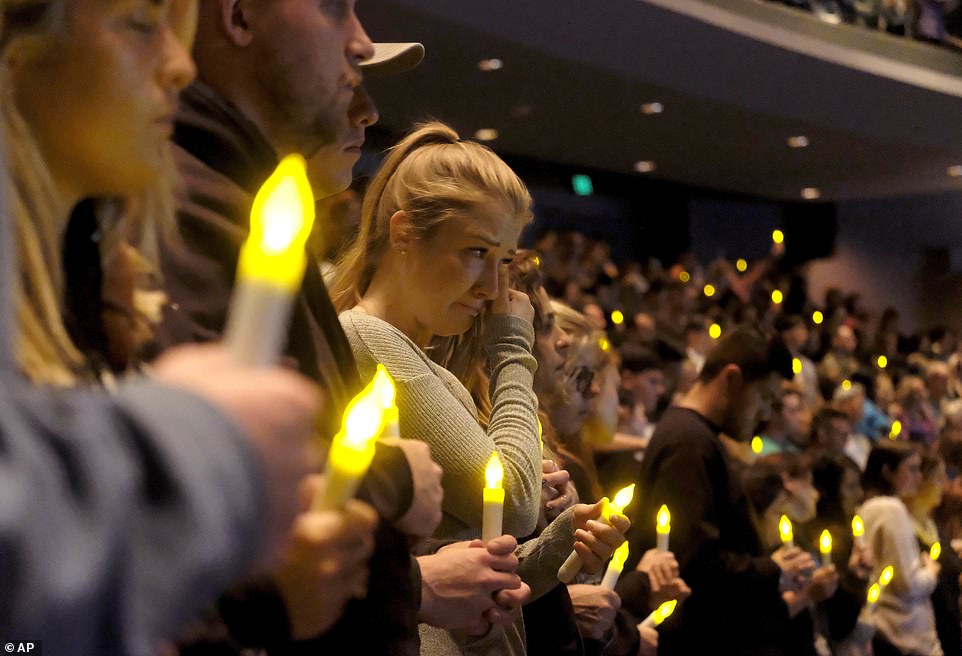 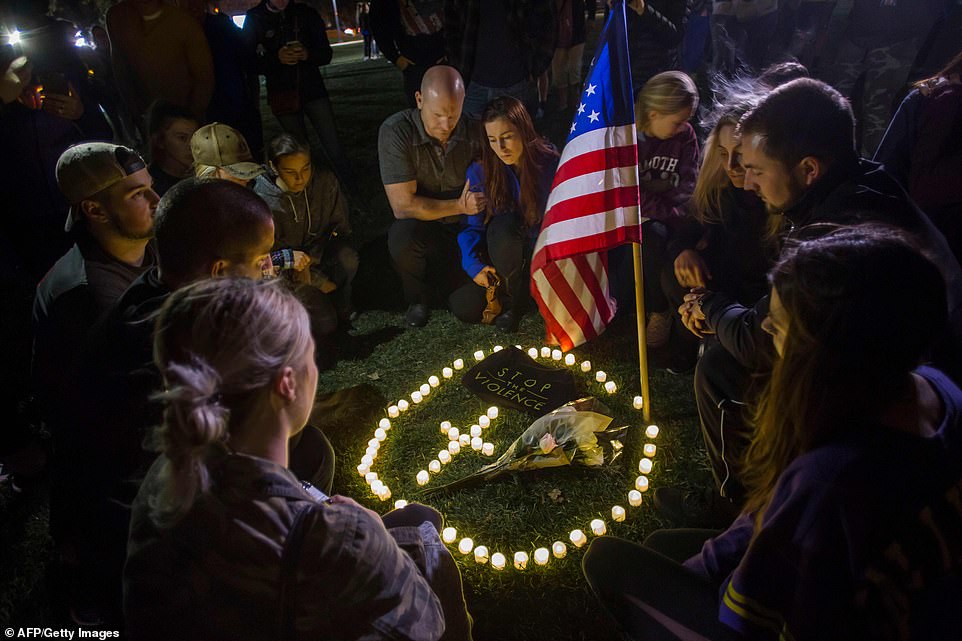 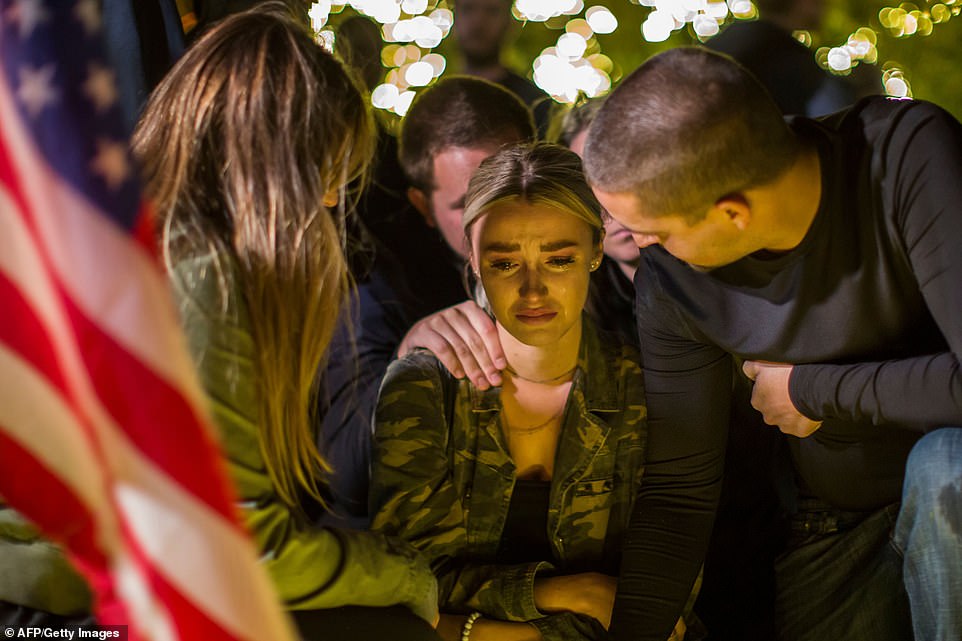 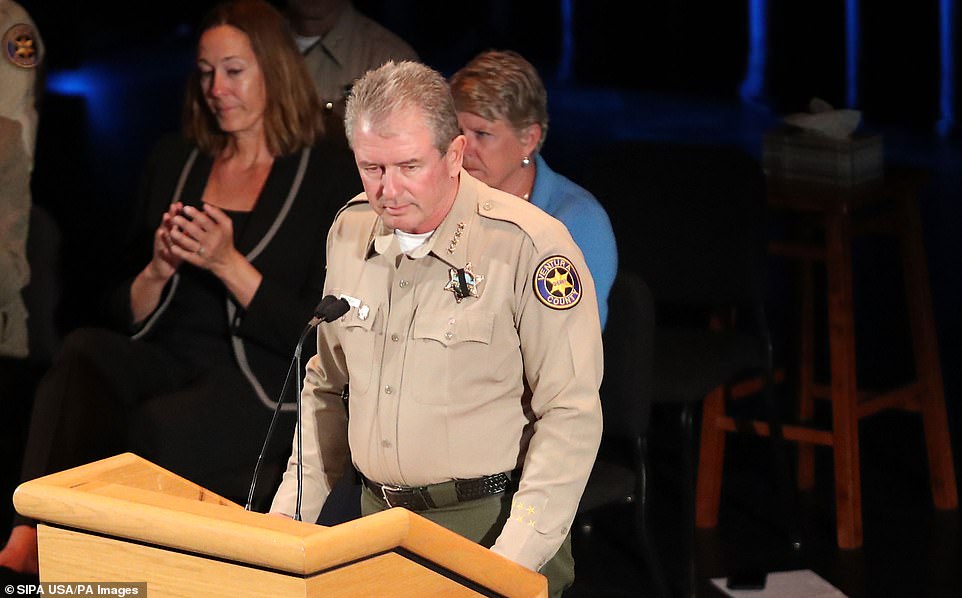 Ventura County Sheriff Geoff Dean, who lost one of his officers in the massacre, recounted the moment he told the man’s wife Sgt. Ron Helus was shot and killed

‘And when I told her that we had lost her hero, I said to her, ‘Because of Ron, many lives were saved,’ Dean said. ‘And she looked at me through her tears and said, ‘He would have wanted it that way, because he was all about the ultimate sacrifice.’

Hannah Williams, 20, of Simi Valley, lost her best friend Kristina Morisette, a 20-year-old Borderline cashier, who she had been friends with since first grade.

Williams and other friends and family of Morisette huddled near the stage, holding a poster that read #KristinaStrong.

Outside the vigil, Williams recalled how excited Morisette had been in recent days after returning from Texas, where she had landed an internship training police dogs.

Williams said Morisette would have been touched to see so many of her friends, family, and community members gathering together.

‘She would see how many people loved her,’ Williams said, fighting back tears. ‘She had the biggest heart, and gave it to everybody, and she deserves us to give that to her.’

‘I’ve known her my whole life,’ Williams said. ‘She was my forever friend.’ 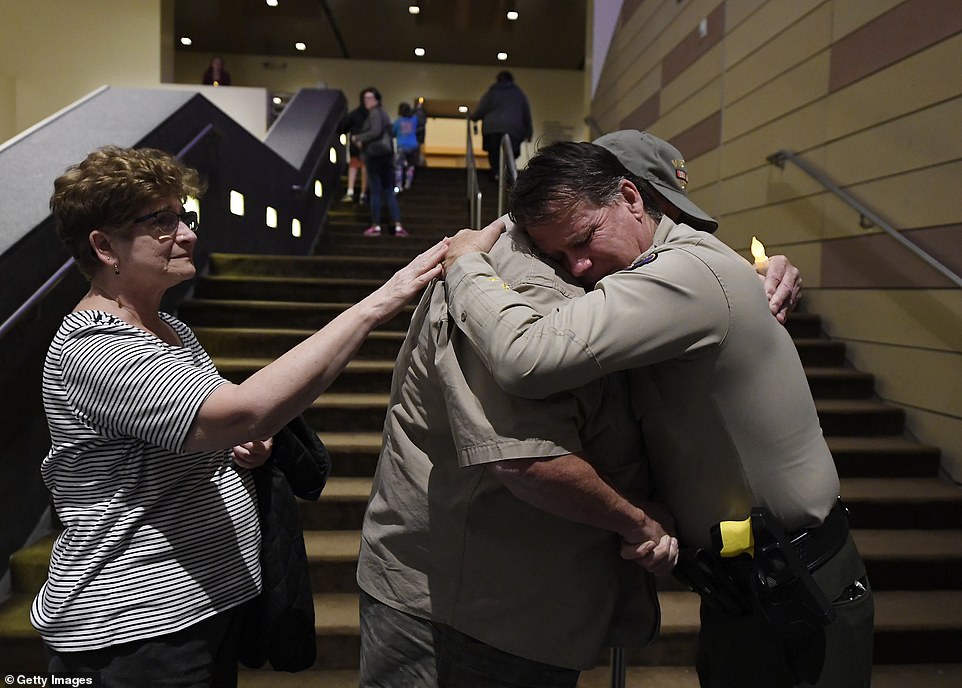 Commander Tim Hagel, Police Chief of city of Thousand Oaks, is comforted by a friend during a vigil for the victims of the mass shooting 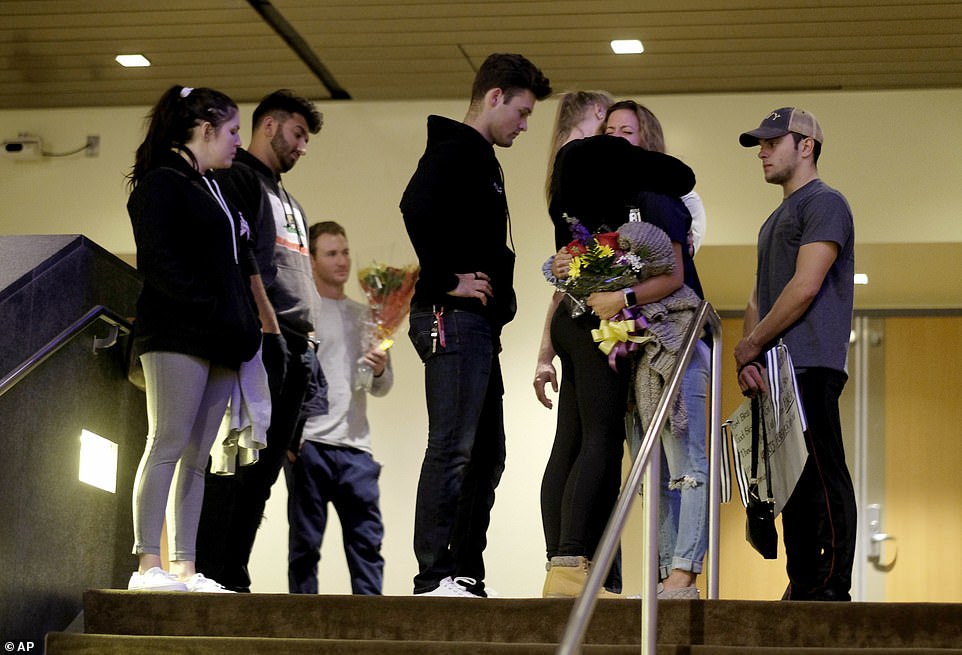 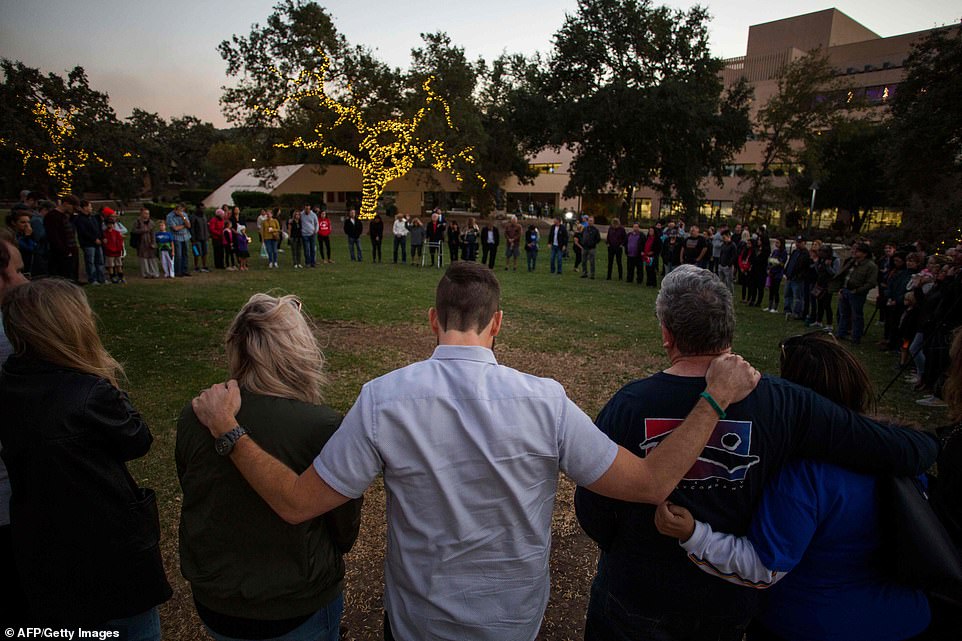