Thousands of people were allowed to disembark from a cruise ship in Miami without any medical screening despite another passenger testing positive for coronavirus.

The former traveler on board the MSC Meraviglia got off in Miami on March 8 after an eight-day Caribbean cruise, leaving the ship’s 103 remaining passengers to continue on to the next destination.

Seven crew members who had close contact with the passenger were isolated in their cabins, the company said.

However, instead of testing those who remained on board once off the coast of Florida, US health officials cleared it to dock and allowed more than 3,800 passengers to leave on Sunday, according to the Miami Herald.

Unlike other cruises with coronavirus concerns, the MSC Meraviglia was not held offshore to test passengers and crew. It also picked up new passengers after leaving Miami.

A spokesperson for MSC Cruises told the Herald no one on board has symptoms of the virus, and the ship ‘followed all protocols as required’ in docking and disembarking.

One passenger told the Herald: ‘If we have [the virus], it’s going to spread throughout the country.

‘When I say there was no check, there was none whatsoever. I expected us to have some kind of a screening. They didn’t do a single thing. We walked straight off the ship. There wasn’t any check on anyone for anything.’ 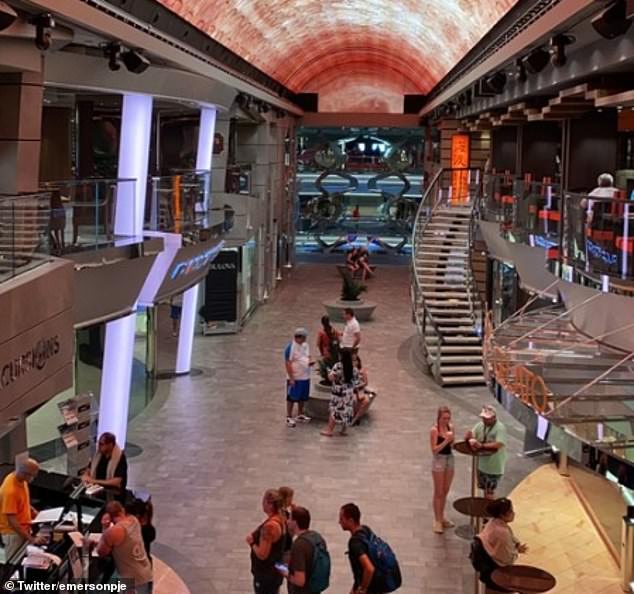 MSC Meraviglia was blocked from Jamaica and the Cayman Islands over coronavirus fears after a member of the crew tested positive for Type A flu (pictured, the ship interior last month)

The ship previously first into trouble after a member of the crew from the Philippines fell sick with flu-like symptoms prompting fears they had coronavirus – but has since tested positive for Type A flu.

As a result the cruise ship was blocked from docking in Jamaica and the Cayman Islands.

Several cruise lines have temporarily suspended operations because of the global outbreak of the coronavirus.

Two previous cruise liners, the Diamond Princess and the Grand Princess were forced to quarantine their passengers when people began getting ill on board.

Both have been criticized for how they handled passengers during the quarantine system.

Since the outbreak began more than 50 cruises have been cancelled, seven ports closed and thousands of holidaymakers’ plans disrupted.