Thousands of Puerto Ricans forced to flee over failing dam

A Puerto Rico dam damaged by heavy rains from Hurricane Maria was in danger of failing on Sunday, posing a risk to communities downstream, as people across the U.S. territory sought to dig out from the deadly storm.

Some 70,000 people who live downstream from the compromised Guajataca Dam in the northwest of the island were under orders to evacuate, with the structure in danger of bursting at any time.

Puerto Rico Governor Ricardo Rossello, after surveying damage to the cracked dam, reiterated his request on Saturday that people leave the area as soon as possible.

‘The fissure has become a significant rupture,’ Rossello said at a news conference.

The dam, which is made of earth and surrounded by trees in a largely rural region of Puerto Rico, is 120 feet tall, according to a U.S. Army Corps of Engineers database

The National Weather Service extended a flash flood watch for communities along the rain-swollen Guajataca River, downstream from the dam, until 2pm local time on Sunday.

Danger: The Guajataca Dam in Quebradillas, Puerto Rico (above on Saturday) is in danger of failing as it was heavily damaged by rains from Hurricane Maria 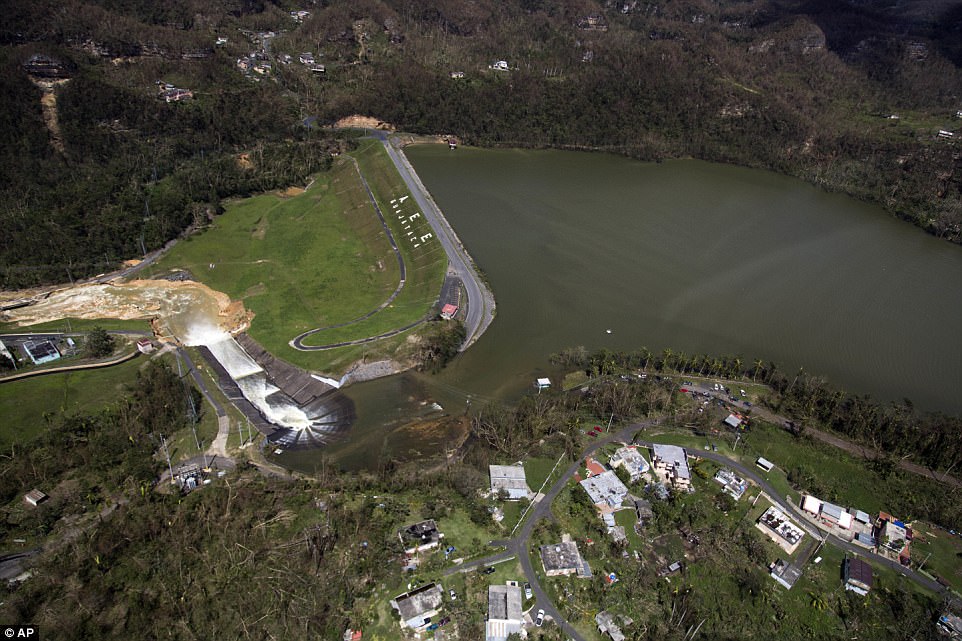 If it fails further, the dam (above on Saturday) poses a risk to communities downstream, as people across the U.S. territory sought to dig out from the deadly storm 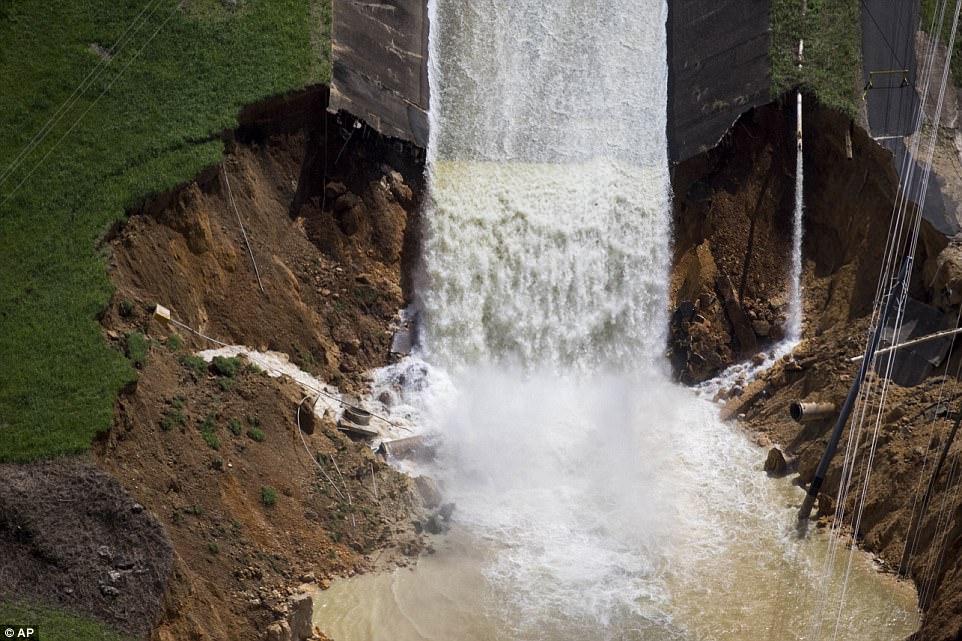 If it bursts, the flooding would be life-threatening, the National Weather Service warned. ‘Stay away or be swept away,’ it said 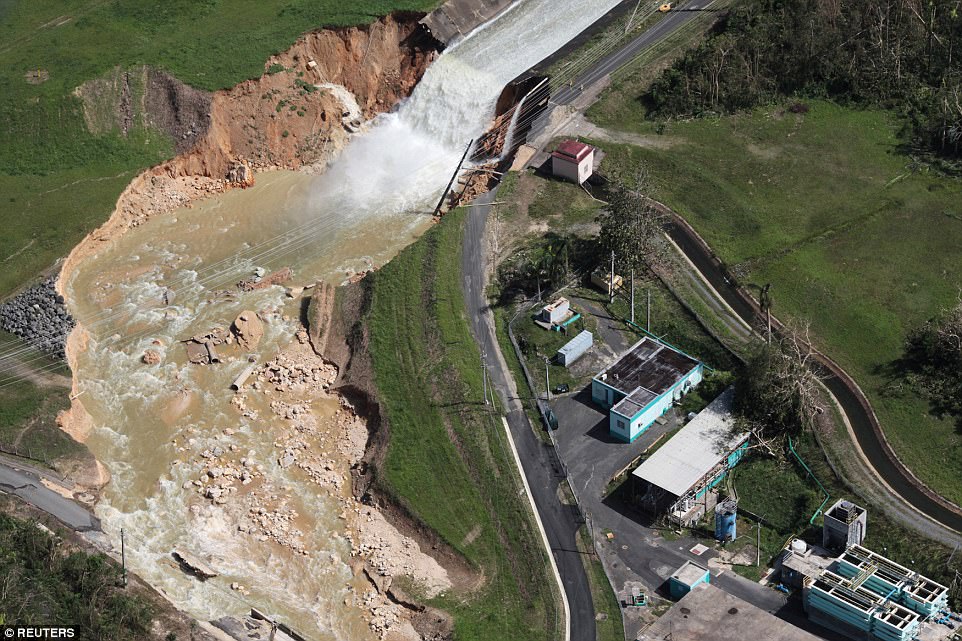 Some 70,000 people who live downstream from the compromised Guajataca Dam in the northwest of the island were under orders to evacuate, with the structure in danger of bursting at any time. Pictured above is a terrifying torrent of water sweeping through Puerto Rico on Saturday 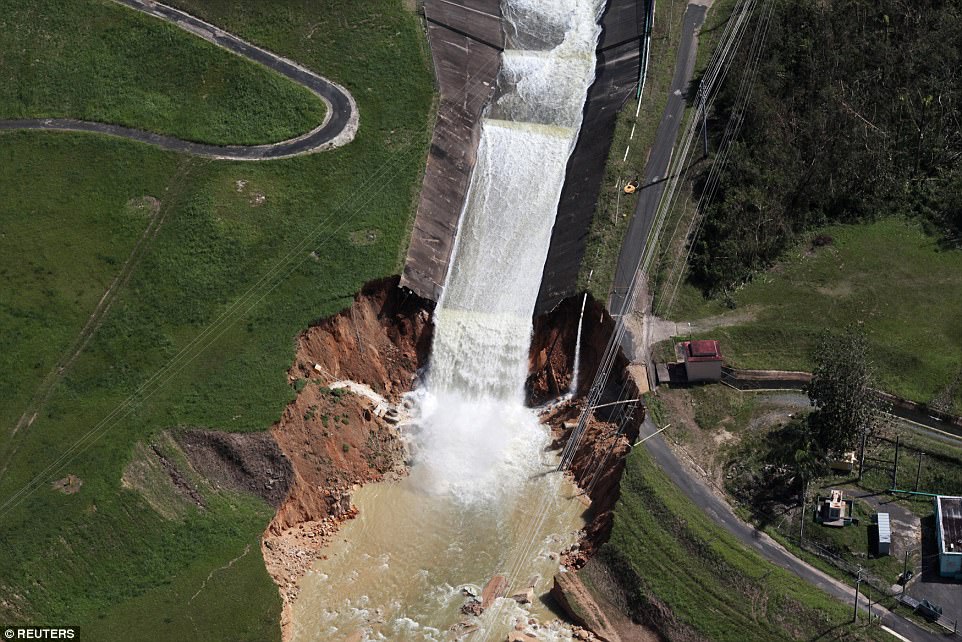 Water was seen sweeping through the municipalities of Isabela and Quebradillas after the dam sustained structural damage from Hurricane Maria. Nearly 16 inches of rain fell in the area, significantly raising water levels on the 90-year-old dam 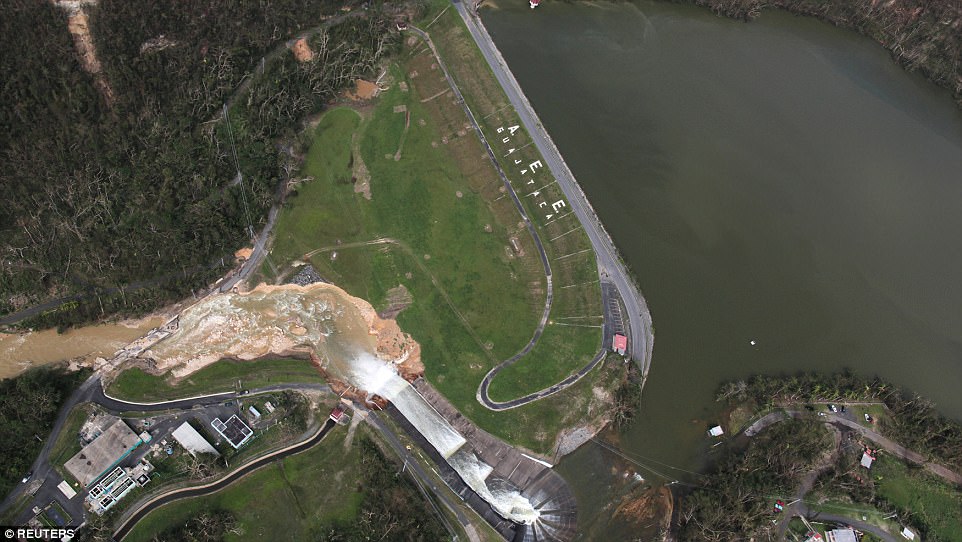 Earlier, Puerto Rican authorities had scrambled to evacuate as many as 70,000 people after the National Weather Service warned that failure of the dam was ‘imminent’ and could lead to ‘life-threatening’ flash flooding 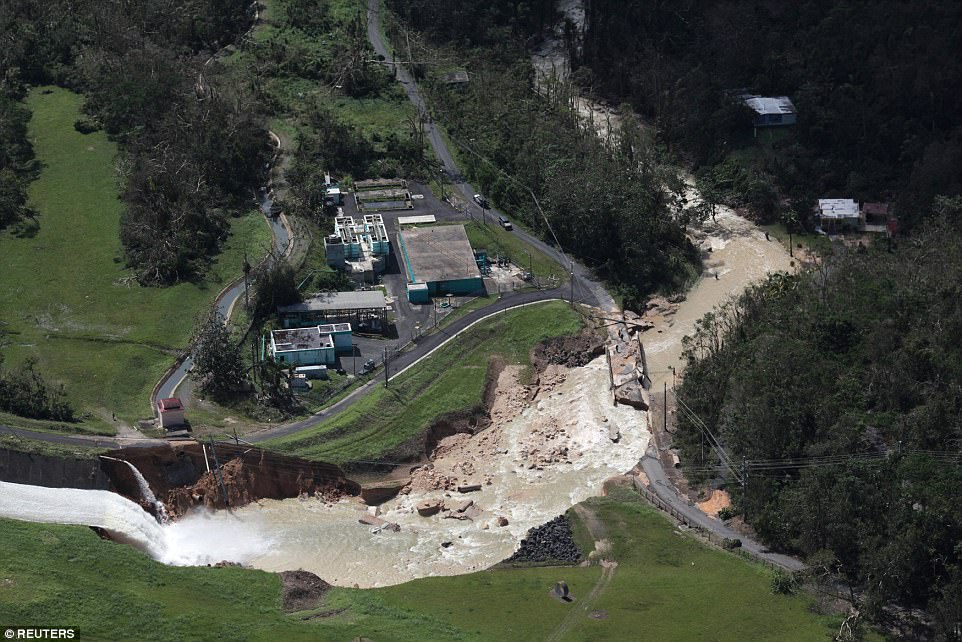 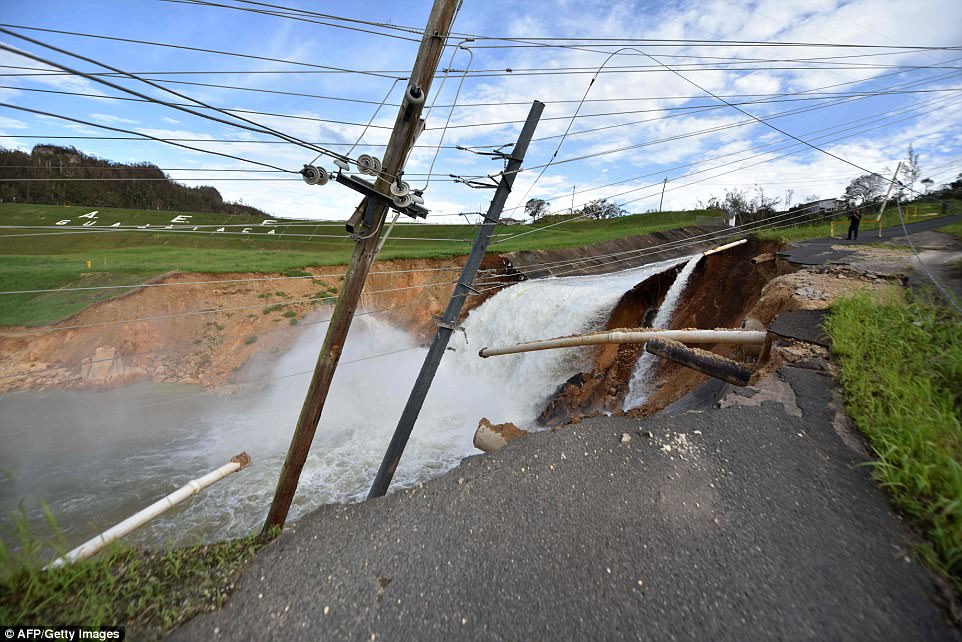 Overflow from the damaged Guajataka River Dam is seen in San Sebastian, in the west of Puerto Rico, on Saturday

If the dam fails, the flooding would be life-threatening, the National Weather Service warned. ‘Stay away or be swept away,’ it said.

Maria, the second major hurricane to savage the Caribbean this month and the most powerful storm to strike Puerto Rico in nearly a century, carved a path of destruction on Wednesday.

The storm killed at least 25 people, including at least 10 in Puerto Rico, as it churned across the Caribbean, according to officials and media reports.

It knocked out electricity, apart from emergency generators, on Puerto Rico, which has 3.4 million inhabitants.

Severe flooding, structural damage to homes and virtually no electric power were three of the most pressing problems facing Puerto Ricans, New York Governor Andrew Cuomo, whose state is home to millions of people of Puerto Rican descent, said during a tour of the island. 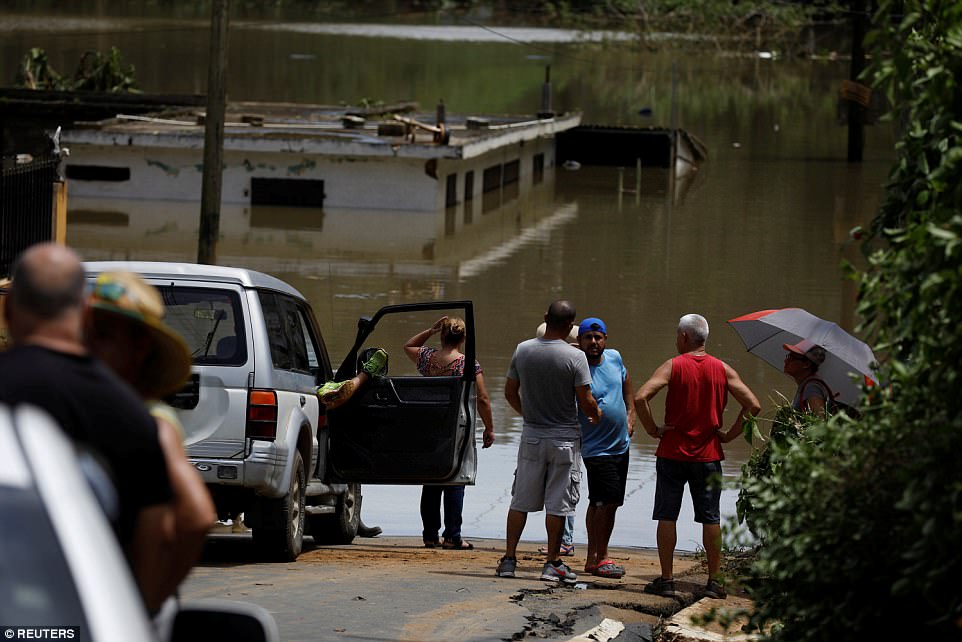 Local residents look at the flooded houses close Lake Guajataca’s dam after it burst, bringing a torrent of water through the northwester region of Puerto Rico on Saturday 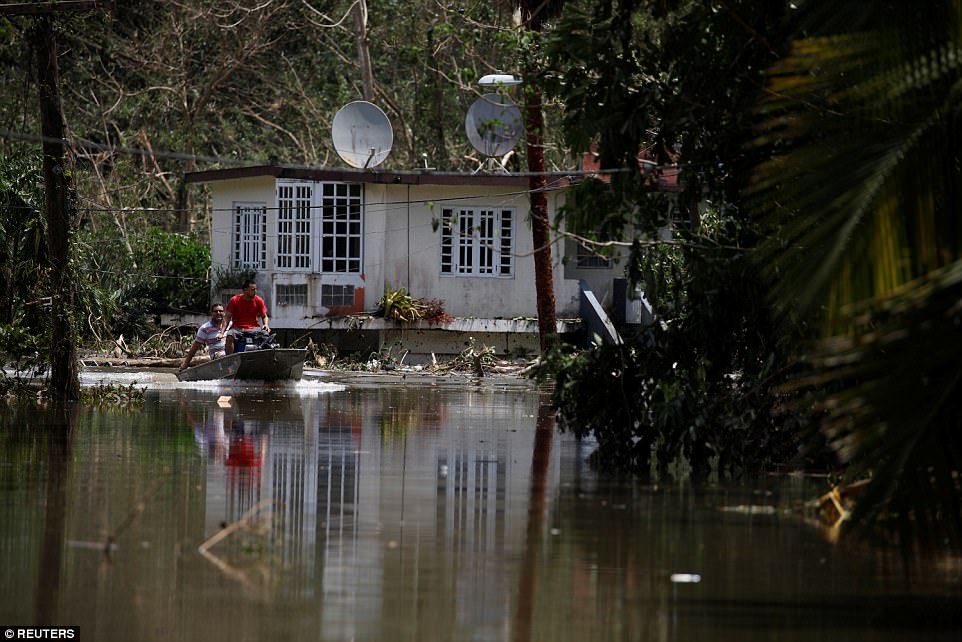 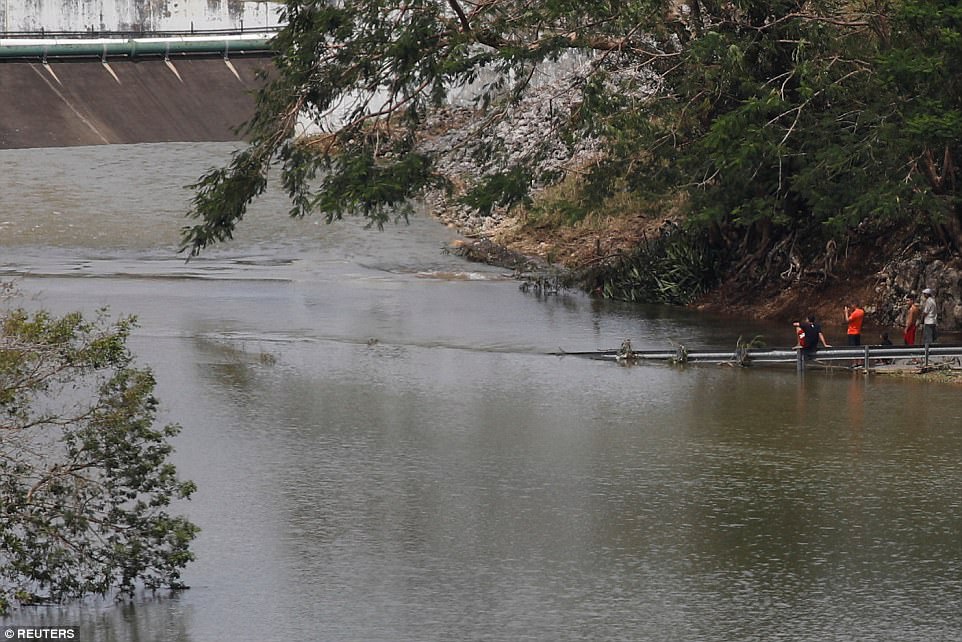 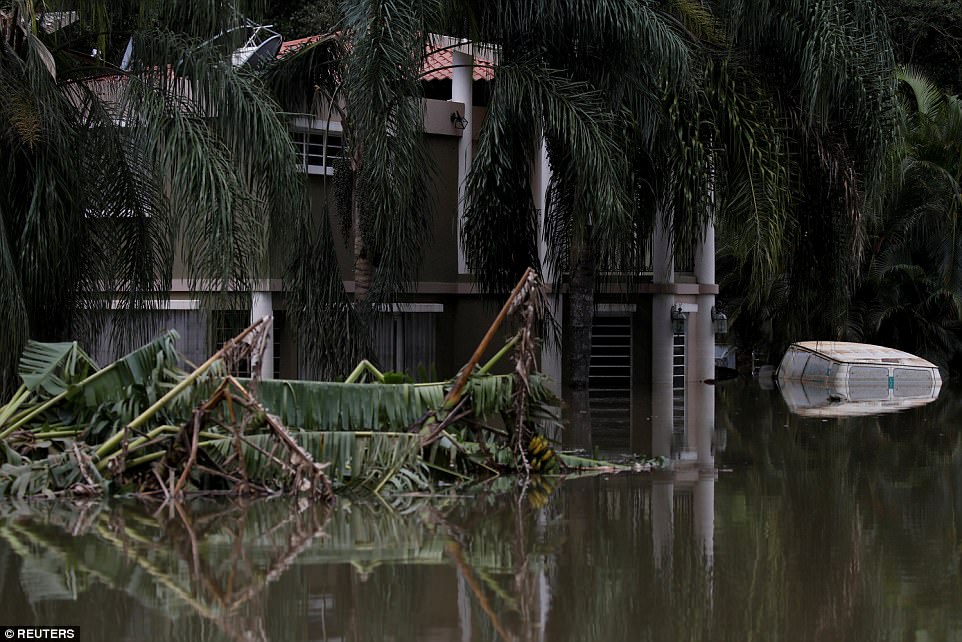 ‘We lost our house, it was completely flooded,’ said resident Carmen Gloria Lamb, a resident near the rain-swollen Guajataca. ‘We lost everything; cars, clothes, everything.’

The Guajataca Dam was built in 1929 to serve as a supply of drinking water and for irrigation, according to a U.S. Geological Survey website.

Signs of the strain on Puerto Ricans were evident throughout San Juan, the capital.

Drivers had to wait up to seven hours at the few filling stations open on Saturday, according to news reports. Hotels, meanwhile, warned that guests might have to leave soon without fresh supplies of diesel to keep generators operating.

Telephone service also was unreliable, with many of the island’s cell towers damaged or destroyed. 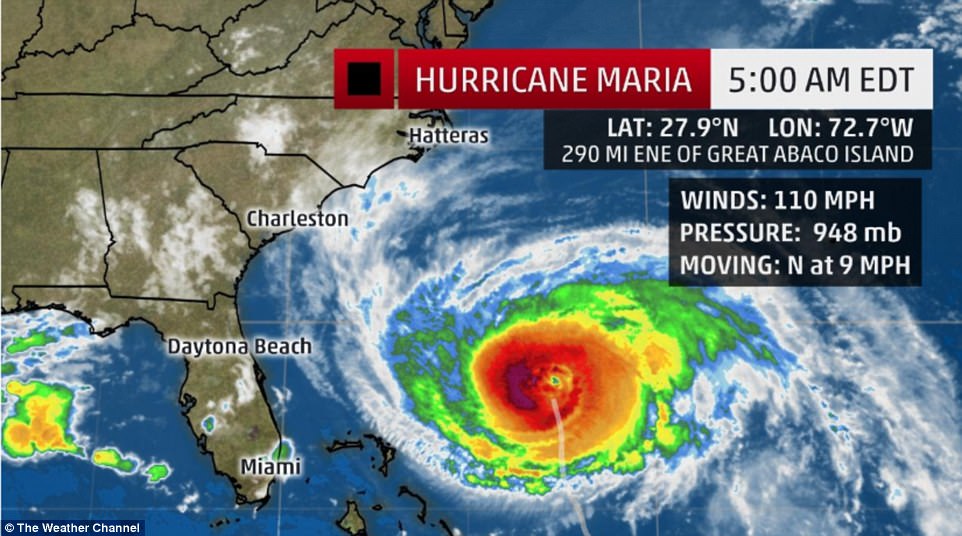 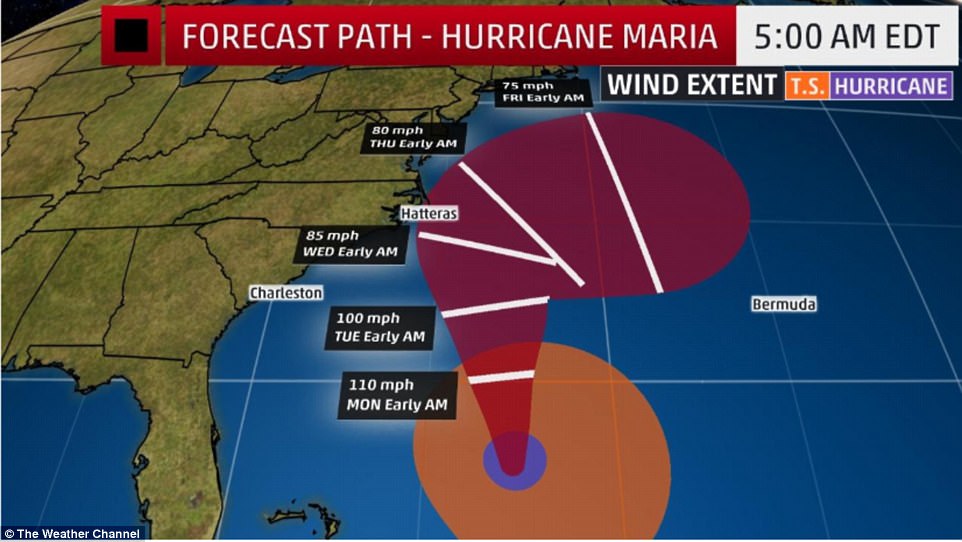 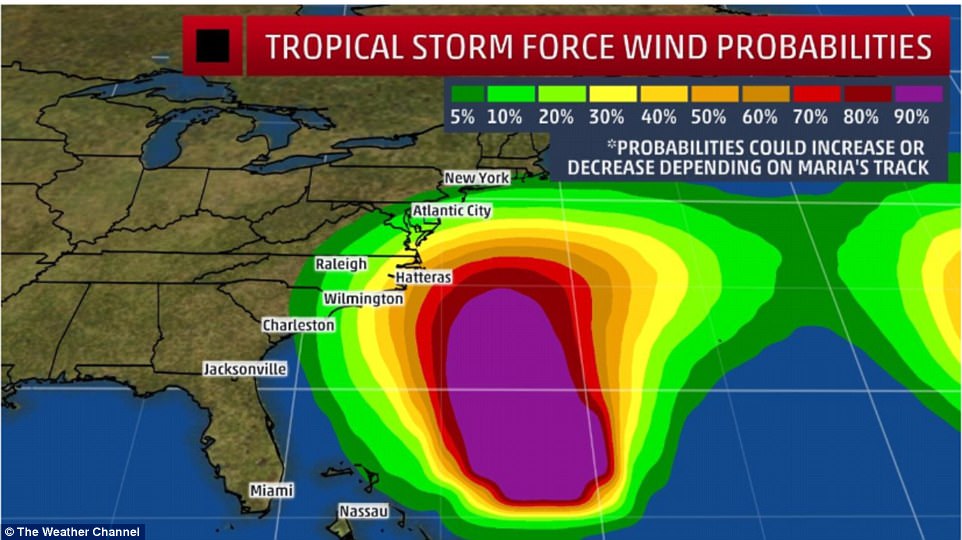 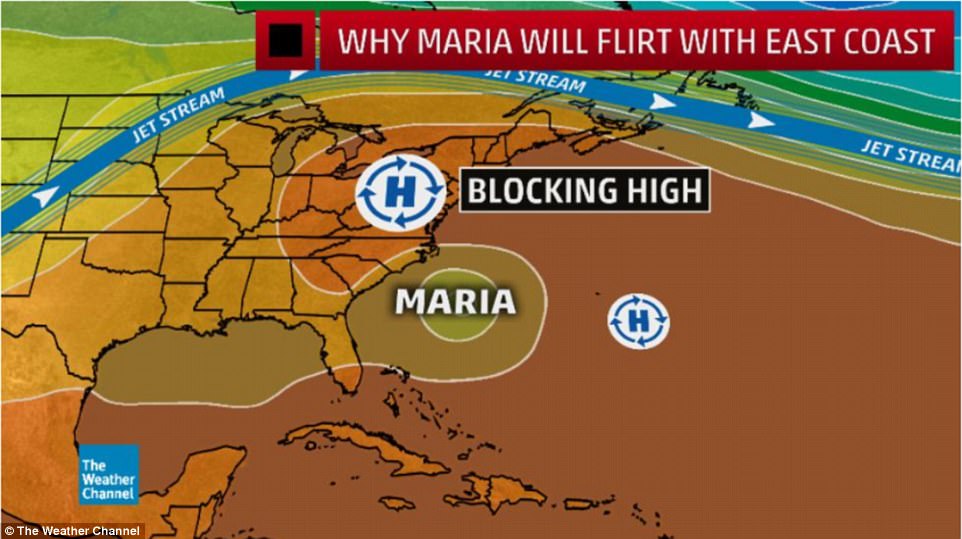 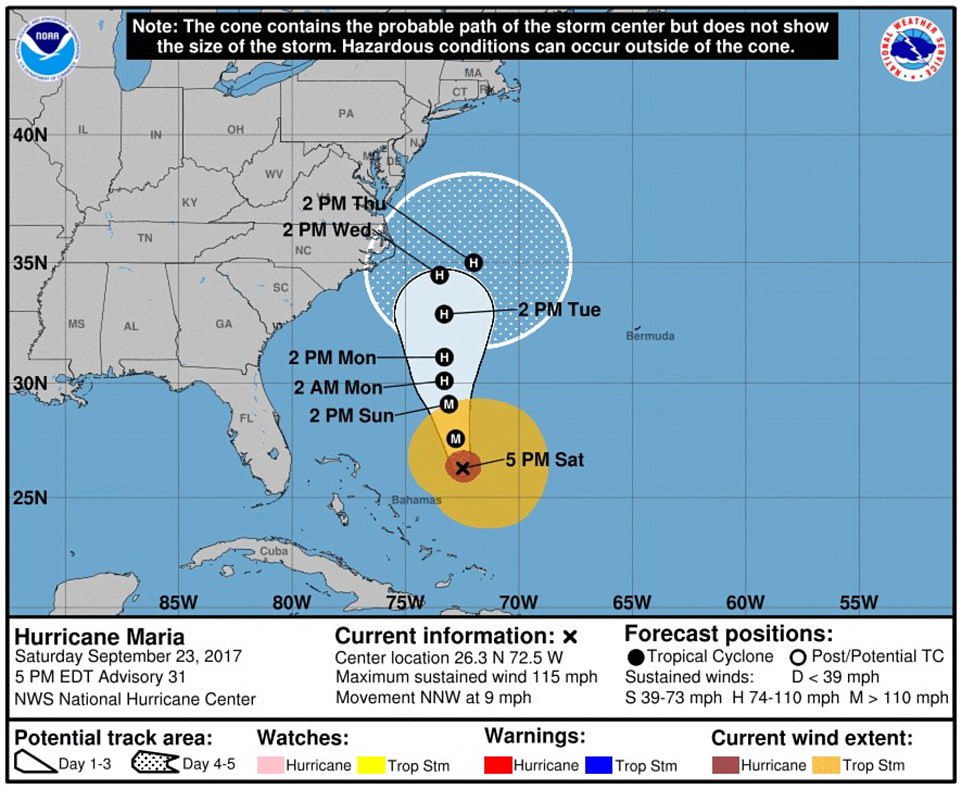 Maria struck Puerto Rico as a Category 4 storm on the five-step Saffir-Simpson scale, dealing a savage blow to an island already facing the largest municipal debt crisis in U.S. history.

The storm caused an estimated $45 billion of damage and lost economic activity across the Caribbean, with at least $30 billion of that in Puerto Rico, said Chuck Watson, a disaster modeller at Enki Research in Savannah, Georgia.

Maria, which was hundreds of miles east of Florida over the Atlantic Ocean on Sunday, had eased slightly to a Category 2 storm but still sustained winds of up to 110 miles per hour.

It was expected to weaken gradually as it moves north over the next two days. 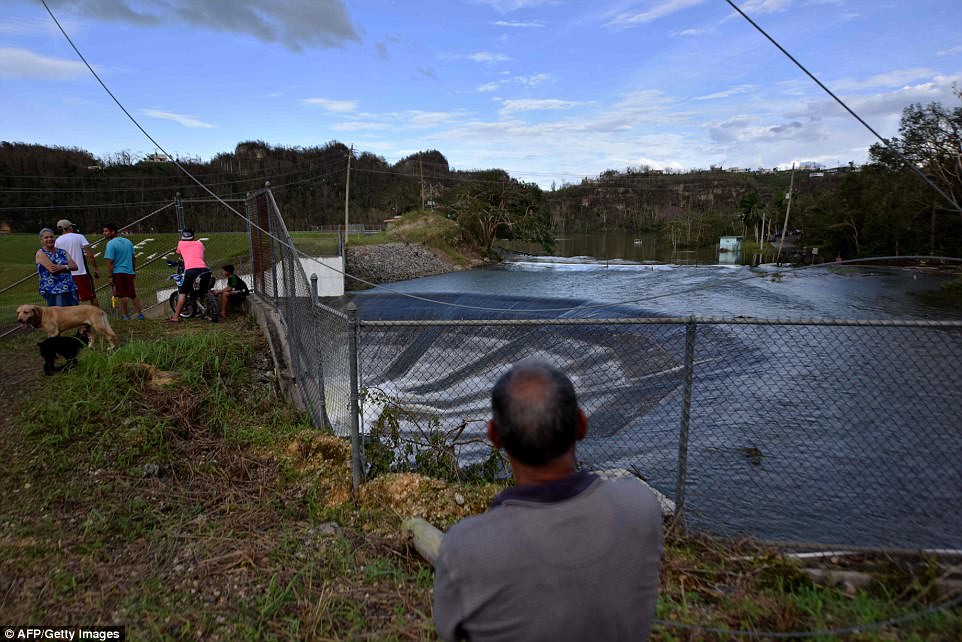 People survey the overflow from the damaged Guajataka River Dam in San Sebastian, in the west of Puerto Rico on Saturday 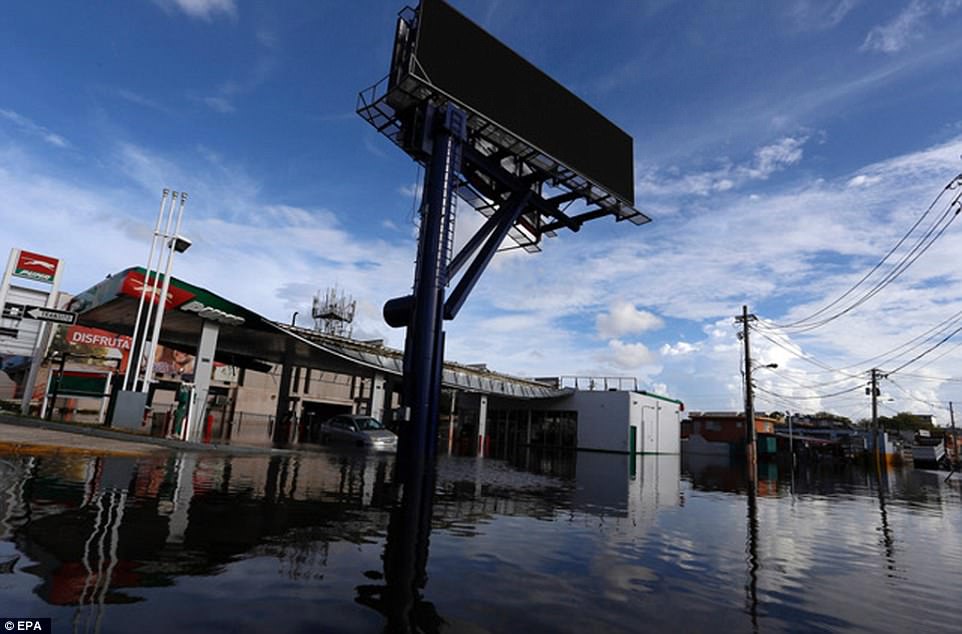 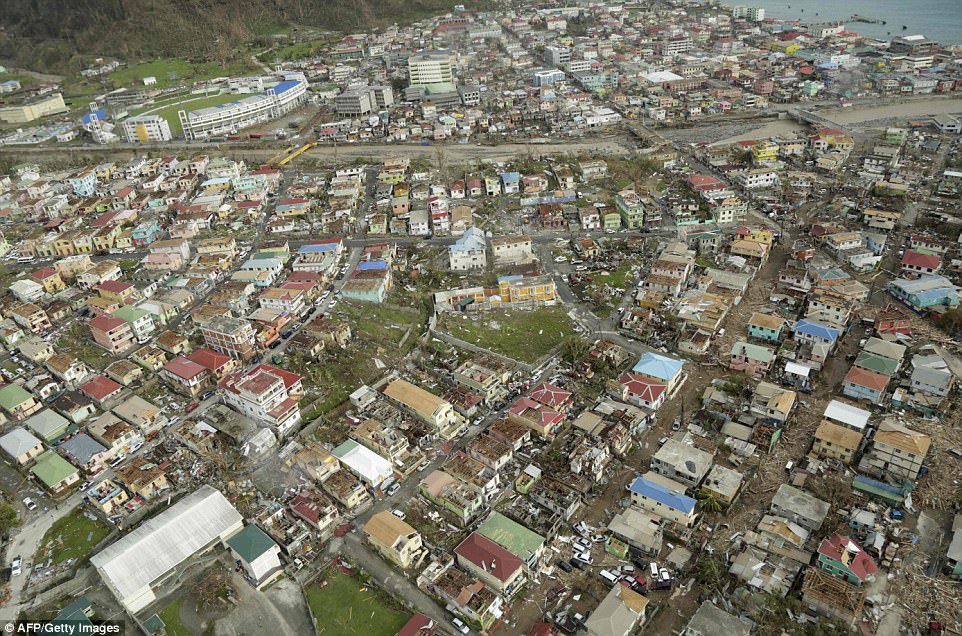 The Department for International Development shows an aerial view of the damage caused by Hurricane Maria on Roseau, the capital of the British Virgin Island of Dominica 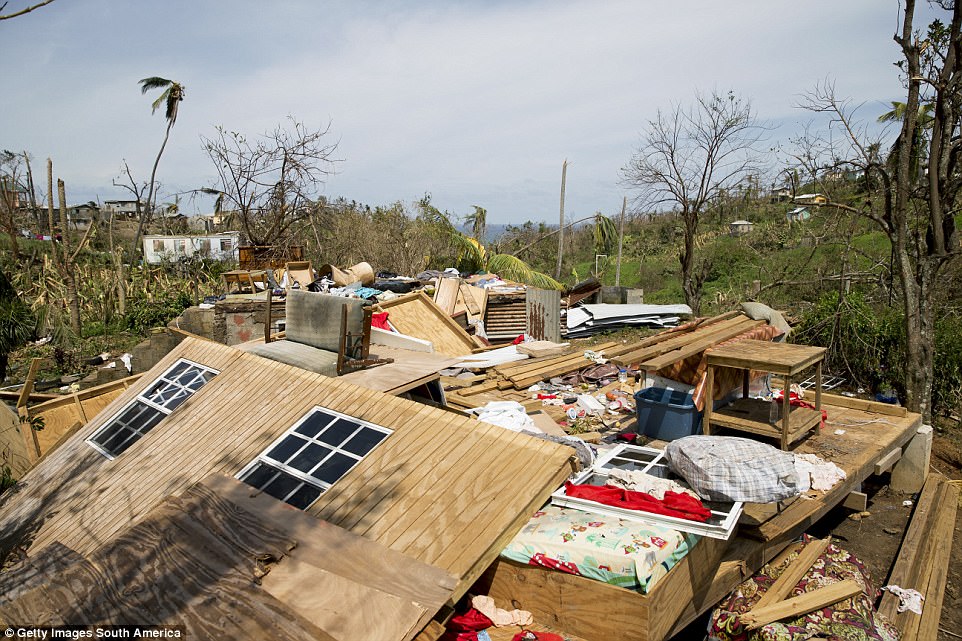 A destroyed home in Wesley Village, Dominica is pictured after Maria hit the island last week

Dangerous surf and rip currents driven by the storm were expected along the southeastern coast of the U.S. mainland for several days, the National Hurricane Center said.

Maria hit Puerto Rico about two weeks after Hurricane Irma, one of the most powerful Atlantic storms on record, killed more than 80 people in the Caribbean and the United States.

The two storms followed Hurricane Harvey, which also killed more than 80 people when it struck Texas in late August and caused flooding in Houston.